"May Day Eve" by Nick Joaquin

Nick Joaquin is the author of so many books, novels, short stories, etc. And one of his known work is the “May Day Eve”. Nick Joaquin, by name of Nicomedes Joaquin, he was born year born May 4, 1917, Paco, Manila, Phil. and he died April 29, 2004, at San Juan, Phil. He is a Filipino novelist, poet, playwright, essayist, and biographer whose works present the diverse heritage of the Filipino people.

As I was reading the story I was bothered because of some complication of the events happened.

Don't use plagiarized sources. Get your custom essay on
“ “May Day Eve” by Nick Joaquin ”
Get custom paper
NEW! smart matching with writer

It is the only story that I have encountered for the rest of my college which I have to go back to what I have just read. The situation in postmodern fantasy is more complicated. For postmodern characters, the boundaries between dream and reality are blurred, the worlds as equally real. My own interest is not in the entire field of speculative fiction but only in the modern tale, which is descended from the literary fairy tale and the philosophical tale and, in particular, in modern tales by Filipino women who write in English.

It accepts more than one reality and more than one truth. Well as far as I know, it is all about love on the night of May, the main character is Anastasia DoÑa Agueda which they call as a witch, Don badoy montiya as a devil and the girl which is the daughter of Agueda. This is an example of realism in fictional novel in which romance and love is occurred.

I think Nick Joaquin is interested in the house of the middle class Maynilans.

This famous short story was set in Intramuros, Manila. Nick Joaquin, wrote it after WWII. This story of a marriage that started with every promise of lasting passion and love later tracks the disintegration of the relationship. Characters in this story, which has magical or supernatural elements that are quite common in modern Latin literature, include Badoy, the narrator, and his love interest, Agueda. Joaquin is viewed as one of the first originators of magical realism in the fiction of his native country, the Philippines.

Love Is the Main Theme of the Story

The story revolves mostly around Badoy and Agueda and the horrible marriage they had together. Badoy was once madly in love with Agueda, mostly due to her looks from the description in the book. He did not know much about her when they were younger and Agueda refused him at first. Later on Agueda is seen using a magic mirror asking who she should wed. The mirror replied to her that it should be Badoy, the man she had first refused. When Don Badoy Montiya forced Agueda to marry him, it shows the status of the women during the past.

Love is a splendid thing, it just happened, as most romantics say that it how goes for Badoy and Agueda. Badoy told his children how he courted their mother to have a strong relation to them. The climax of the story is like ruefully causing sorrow or pity, pitiable and deplorable. Shrivel to contract and wrinkle, as from great heat and cold as long as the grief is the emotional which I included here. They chose to see the worst, but in the end, it can be seen they were in love. The worst in each other only came out when they chose to see it in the tragic way. The moral could also be that reality comes no matter what, and one just has to live with that reality whether it is good or bad. It also shows that youthful love will change and not always remain. 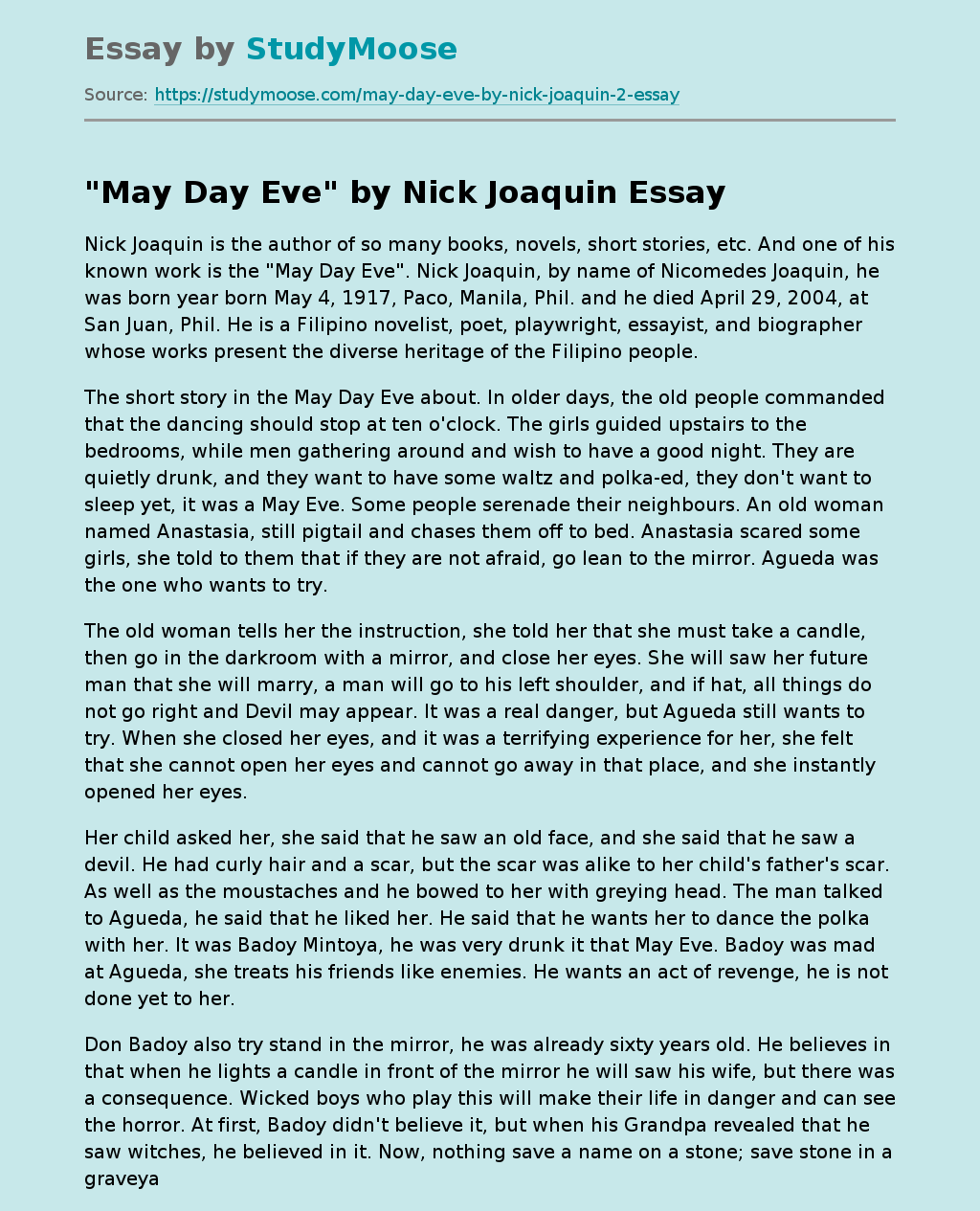