Characters and their dynamics have always been fascinating, to see a character grow and evolve alongside the story and setting allows the reader to gain a personal bond as they feel they’ve been with them every step of the way. A great example of character dynamics and setting progression is in that of Beowulf, an Anglo-Saxon poem that follows the adventures of Beowulf as he grows from a fearless young man to the courageous king of the Geats. Over the course of the story, we see him take on three different foes, as he journeys to becoming king and rule over his homeland.

As the story progresses we see Beowulf mature from a young and boastful prince to a more mild and tame king. By the end of the story, we see Beowulf develop empathy and care for his people and those around him, something he didn’t seem to have a lot of at the beginning of the book.

From the start, Beowulf is characterized as an almighty hero. Which he himself knows and is quick to gloat about. Beowulf is often cocky, and quick to boast which leads him to get involved in squabbles. “Ah! Unferth my friend, your face is hot with ale, and your tongue has tried to tell us about Brecca’s doings.

But the truth is simple: no man swims in the sea as I can, no strength is a match for mine.” (Raffel 23). Beowulf knows his ability and skills, which is why he’s defensive and braggy anytime he’s called out. And although Beowulf is boastful his actions more than makeup for it as he defeats Grendel and his mother solidifying and backing his boasting. “He was happy now, with that night’s fierce work the Danes had been served as he’d boasted he’d serve them Beowulf, a prince of Geats had killed Grendel…”(Raffel 34). Beowulf proves his boasts hold pois, however, this doesn’t make his boasts seem any less cocky. Beowulf is still gloating and proud of his accomplishments. “‘I wish I could show you, here in Herot, his corpse stretched on this floor! I twisted my fingers around his claw, ripped and tore at it as hard as I could… but god’s will was against me, as hard as I held him he still pulled free and ran, escaped from this hall with the strength fear had given him. But he offered me his arm and his claw’…” (Raffel 40). Beowulf shows that even when he wins he still has to tell the tale, and can’t just let his actions speak for themselves. Beowulf no longer needs to boast as he’s already got Grendel’s arm as a trophy yet he decides to anyway despite everyone already knowing what he’s done. “Unferth grew quiet, gave up quarreling over Beowulf’s old Battles, stopped all his boasting once everyone saw the proof of that prince’s strength, Grendel’s huge claw swinging high from Hrothgar’s mead-hall roof…” (Raffel 40). Beowulf quickly abandons his boastful manner, however, when he’s called back to Hrothgar.

Towards the middle of the story is when we see his character begin to become more responsible and mature. Once Grendel was defeated and Beowulf returns home he’s called back once more to defeat Grendel’s mother. Beowulf chooses to help kill Grendel’s mother not because Hrothgar expects him to, or because it would bring honor to his name like it did when he defeated Grendel, but because he genuinely wants to help Hrothgar gain closure for the death of his close friend.“Beowulf spoke ‘Let your sorrow end! It is better for us all to avenge our friends, not to mourn them forever… Arise, Guardian of this kingdom, let us go, as quickly as we can, and have a look at this lady monster: She’ll have no shelter, no hole in the ground, no towering tree, no deep bottom of a lake, where her sins can hide…’” (Raffel 56). Beowulf even comes to terms with his rival Unferth, casting aside his pride and accepting Unferth’s sword before facing Grendel’s mother “ And Unferth helped him… Lent him a famous weapon, a fine, hilted old sword named Hrunting it had an iron blade etched and shining and hardened in blood… Unferth had tried to forget his greeting to Beowulf, his drunken speech of welcome a mighty warrior, he lent his weapon to a better one.” (Raffel 58 & 59). In response to this kind gesture, Beowulf proudly leaves his old sword with Unferth, showing how Beowulf has matured enough to almost befriend Unferth. “‘And you Unferth, let my famous old sword stay in your hands: I shall shape glory with Hrunting, or death will hurry me from this earth!’” (Raffel 60). Even Hrothgar references the idea of Beowulf becoming more humble. After Beowulf returns victorious with the giant’s hilt, he used to kill Grendel’s mother, Hrothgar warns Beowulf of the dangers of being too proud “‘Be not as Hermod once was to my people, too proud to care what their hearts hid, bringing them only destruction and slaughter. In his mad rages, he killed them himself, comrades and followers who ate at his table. At the end he was alone…’” (Raffel 68). Hrothgar is warning Beowulf of the dangers of being a proud and self-centered king, luckily however Beowulf ends up being a great ruler with courage and care for his people.

By the end of his story, Beowulf is the king of the Geats. He’s a great king, showing genuine guilt and sorrow for any harm that befalls his people or kingdom. “Their words brought misery, Beowulf’s sorrow beat at his heart: he accused himself of breaking God’s law, of bringing the almighty’s anger down upon his people. Reproach pounded in his breast, gloomy and dark, and the world seemed a different place. But the Hall was gone, the dragon’s molten breath had licked across it, burned it to ashes…” (Raffel 92) Beowulf not only feels sorrow for the damage the dragon’s done to his people but feels directly responsible for it despite it being out of his control. This display of empathy is remarkably different from the beginning of the book when Beowulf was more self-centered and boastful. It’s also a noticeable evolution from the middle of the story when Beowulf chose to help Hrothgar out of the kindness of his heart. There are a clear evolution and development of empathy and a sense of responsibility within Beowulf from the beginning of the story to the end of it. He has transitioned from a boastful and cocky prince eager to kill and look for a challenge, to a king who protects others and shows empathy for them and their misfortune.

Beowulf is a dynamic character, the change he’s undergone throughout the book is undeniable. Beowulf gained empathy and humility along the road on his journey to becoming king. Although Beowulf retained some of his key characteristics such as his strength, bravery, and lust for gold he became a more well-rounded hero by the end. Beowulf learned to overcome his boastfulness and become more humble. Beowulf changes from the boastful prince he was when he faced Grendel, to the humble and kind prince when facing Grendel’s Mother, finally ending his life as a courageous and empathetic king as he faced the dragon. The experiences that Beowulf faces in the text, mold him and changed him. They took him from being boastful and headstrong, to kind and humble. In a way, this could relate to all our lives, as our experiences change and mold who we are as we grow up. For Beowulf, it was defeating monsters or dragons and becoming king that changed him for the better. Our adventures might not be as grand, and yet we grow as we progress through life. At the end of our story we’ve all changed, we’re all dynamic. 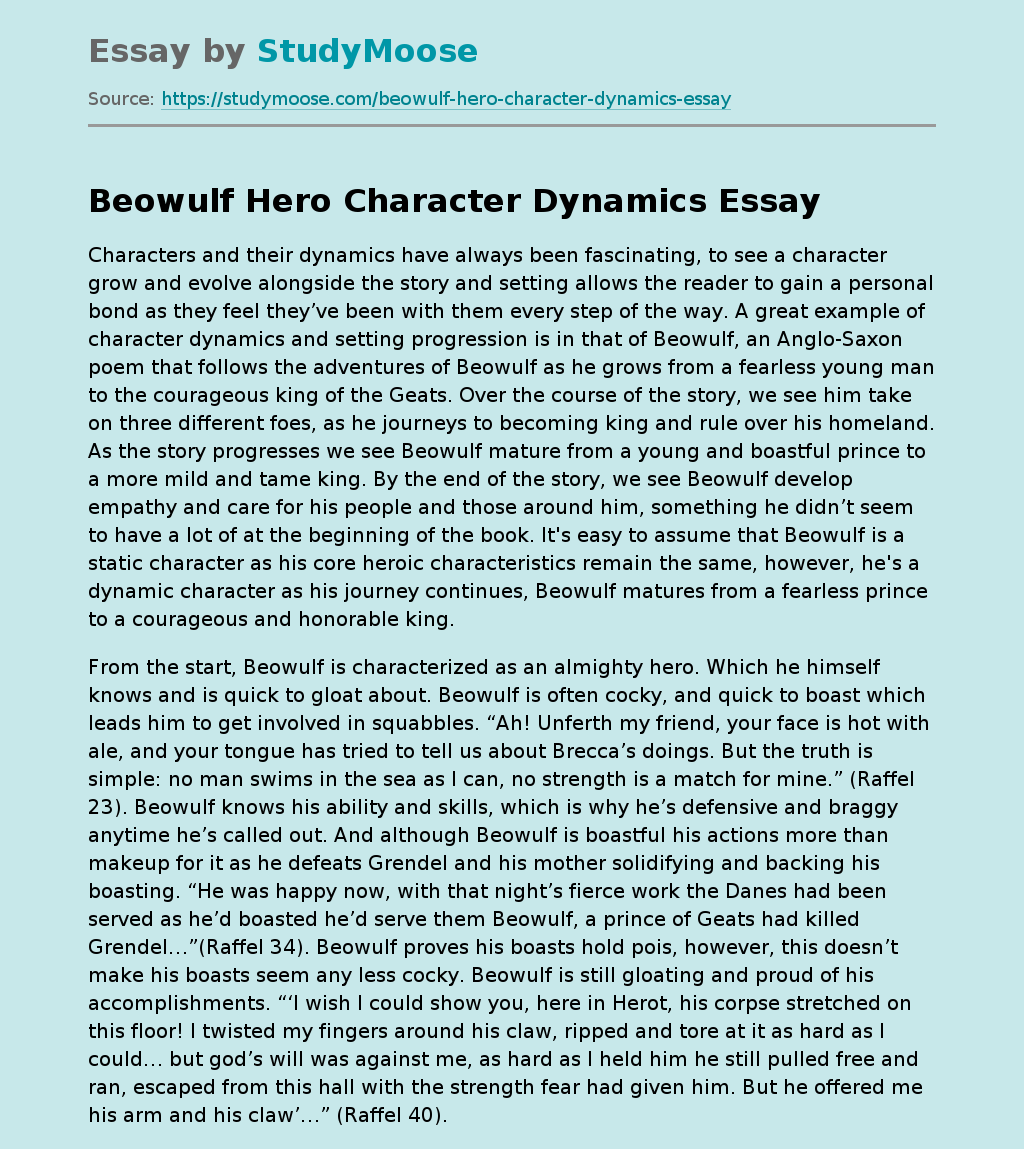