The word hero is a broad term and can be defined in many different ways. A hero has several qualities like courage, respect, and strength can define heroism. When it comes to heros, most people like to believe that a hero would always be there to save humanity as needed however, that is not always the case. All heroes are different, but what makes them epic is that they are formed in an epic narrative. Also their accomplishments in the narrative grants them the title epic hero.

Don't use plagiarized sources. Get your custom essay on
“ Definition of Hero in “Beowulf” and “Sir Gawain and the Green Knight” ”
Get custom paper
NEW! smart matching with writer

First it is important to understand what, or who an ‘Epic Hero’ is. A epic hero is an archetypal protagonist who has impressive qualities that enable them to complete daunting tasks with odds stacked against their favor. Most epic heroes are the chosen ones by their superior, however some puts their self on the line when no one else have the courage to come forward.

Epic heroes are superior than any other man. For clarification epic heroes are bigger, faster, stronger, and wiser than anyone else in the narrative.

In addition most of the time epic heroes plays a strong leadership role and make them an honorable figure in the narrative. Anyone can be a hero, but it takes much more to be considered an epic hero. Throughout history going back thousands of years there have been many great stories about great warriors and champions, however the one about epic heroes are the truly exceptional ones. From those exceptional ones some stands out from the rest, for example “Beowulf” and “Sir Gawain and the Green Knight”.

Both texts are epic poems and they showed the formation of epic heroes. They showed epic heroes like Beowulf and Sir Gawain who went on a long journey to face and conqueror their challenges. Throughout the text they both demonstrates the qualities that an epic hero possess. They both undertake their journey to achieve something of great value and yet they maintained humanity.

Combined with all these characteristics Beowulf and Sir Gawain were formed into epic heroes. Beowulf is a prime example of an epic hero. He puts himself on the line to fight Grendel and when Grendel’s mother came to seek revenge he goes after her. He takes a journey to the lake of monsters and takes on the challenge. Throughout his life he shows the great qualities of strength and power to fight for the greater goods. Years after fighting Grendel and his mother he takes on the dragon who became a threat to his kingdom. He took pride in fighting enemies. During the fight with the dragon when everyone backed off Beowulf faced the challenge with bravery and pride never ones he had any fear of death. This showed his strength, courage and fearlessness as an epic hero should have. Beowulf fought in multiple battles and returned with victory and the the one he was defeated has more victory in it, as Beowulf lost the swimming race to Brecca, he explained that he was slowed down by nine sea monsters that he encountered on his way and kills them.

Being stronger than everyone else puts Beowulf on the path of becoming an epic hero. Beowulf was strong enough to fight Grendel with his bare hands. During his fight with Grendel he ripped off Grendel’s arm with his hand, which eventually lead to Grendel’s death. Later on when Beowulf was fighting Grendel’s mother he slashed her neck with a giant sword, which was only possible to loft by someone with great strongness. This strength is a key trait of Beowulf’s heroism and one of the fundamental pillar which formed him in to an epic hero. All of Beowulf’s action showed his willingness to help others. His action against Grendel was a prime example of that. His actions were very important to his people as it determined their faith. Beowulf had superhuman strengths which he used to fight for his people. Beowulf served as a frontier for his people. When his people were in danger he feared nothing for his own life and faced the challenge by himself.

After Beowulf served his people as King for fifty years, he faced the biggest challenge of his life as a dragon started attacking his kingdom. Knowing that this might be his last battle Beowulf goes to fight a dragon that is frightening all of his people. He defeats the dragon however it was the end of him too. He died as an epic hero fighting for his people. Beowulf is the ultimate example of an epic hero. He risked his life multiple times for the greater goods. His bravery and strengths sets up a great example for the society. His loyalty made him honorable by all, and his ability to think of himself last puts him to the highest respectable place possible in the society. His leadership skills were super. His accomplishments were so great that he was able to brag about all about it. These characteristics are what formed Beowulf as a true epic hero.

Definition of Hero in “Beowulf” and “Sir Gawain and the Green Knight”. (2020, Sep 05). Retrieved from https://studymoose.com/definition-of-hero-in-beowulf-and-sir-gawain-and-the-green-knight-essay 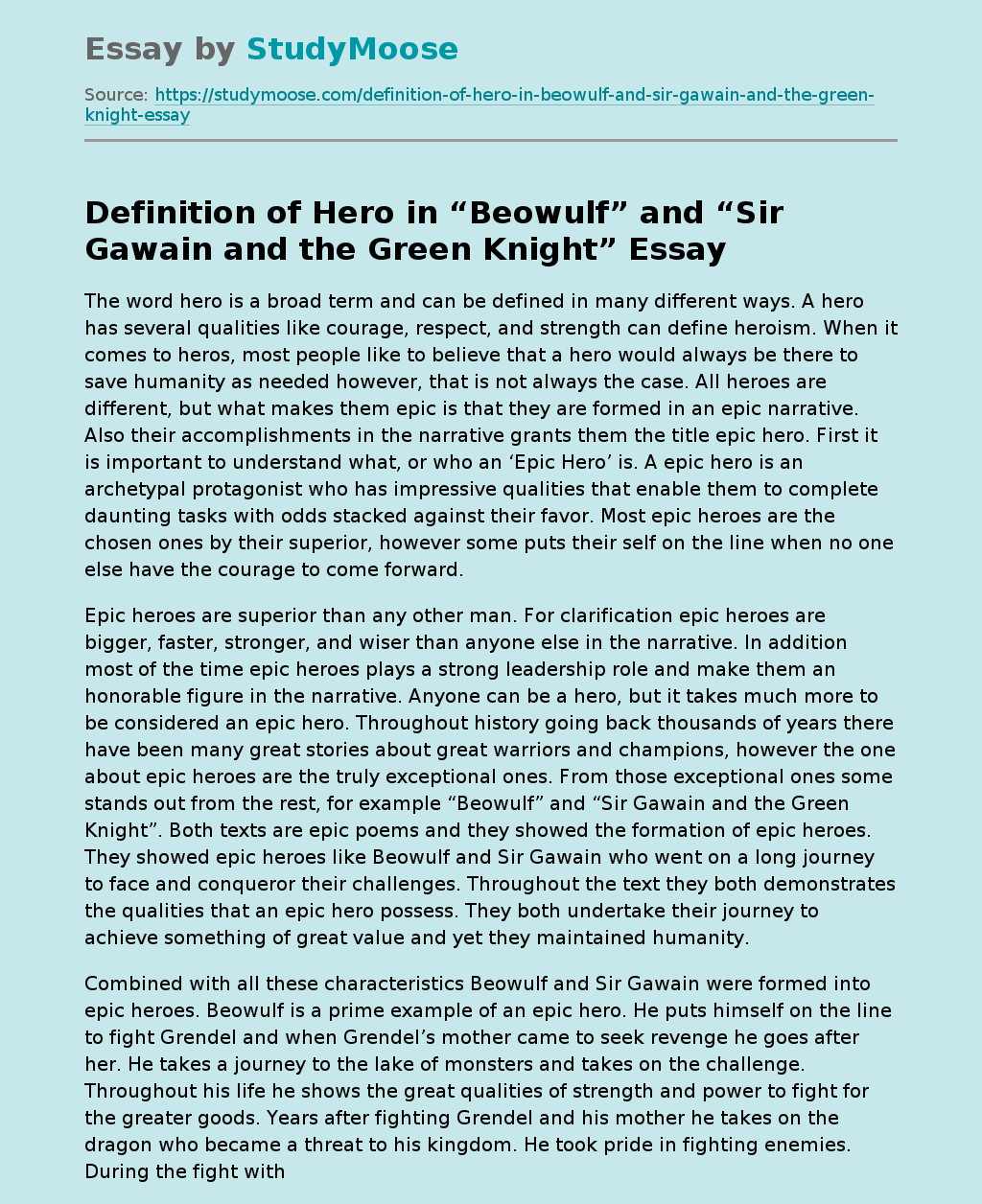