Charles Darwin once said that, “A man who dares to waste one hour of time has not discovered the value of life.” In Sir Gawain and the Green Knight, Sir Gawain is an honest and chivalrous knight, as seen in his pentangle, “The fifth five I find the famous man practiced Were – Liberality and Lovingkindness leading the rest; Then his Continence and Courtesy, which were never corrupted; And Piety, the surpassing virtue” (Gawain, 651-654). Sir Gawain’s chivalrous character seems superficial and wasted to some individuals because it means he cannot live a fulfilled life.

Don't use plagiarized sources. Get your custom essay on
“ Personality Traits and Development of Sir Gawain ”
Get custom paper
NEW! smart matching with writer

In the words of Darwin, this would mean that Sir Gawain does not understand what the value of life is. Certain green objects, such as the green girdle, the Green Knight’s accoutrement, and the Green Chapel, represent the quest of truth in Gawain’s character and the understanding of the value of life, which is the ability to learn from mistakes and continuously grow as life goes on.

The story of Sir Gawain and the Green Knight begins with a mythical creature, the Green Knight, interrupting a New Year’s feast in King Arthur’s court. We can see that this green knight is the symbol for corruption and dangerousness, in comparison to the symbolism of Arthur’s court, including Sir Gawain, being orderliness and safety. He is clothed in all green garments, “And garments of green girt the fellow about—A two-third length tunic, tight at the waist” (Gawain, 151-152).

The green in his appearance is the symbol for evil because he becomes the adversary of Sir Gawain, the one who challenges Gawain’s morality.

The Green Knight’s weapons are also decorated in green, “The head of that axe was an ell-rod long. Of green hammered gold and steel was the socket, And the blade was burnished bright, with a broad edge” (Gawain, 211-212). The abundance of the color of green is important because it represents Gawain’s instability and uncertainty.

The Green Knight uses the weapons to take three blows at Sir Gawain, but Gawain flinches before he is able to strike him. The creature leaves a scar Gawain’s neck when they finally clash; the wound is symbolic for the deterioration of Gawain’s knighthood. Sir Gawain was a person full of virtue and believed in the goodness of the world, as the poet describes him as “like gold well refined, He was devoid of all villainy, every virtue displaying In the field” (Gawain 633-635).

He is called up to fight this Green Knight. Before he starts his quest to encounter the knight, he is welcomed as a guest at Lord Bertilak’s castle to stay and rest easily for a couple of days. As a knight of King Arthur’s court, the Lord expects Gawain to be courteous and do whatever action the Lady performs on Gawain to the Lord himself. While the Lord is out hunting deer, boars, and foxes in the forest, the Lady sneaks into Gawain’s bedroom, closes the door shut, and attempts to seduce him like how her husband is hunting the animals.

Following the code of the knights, Gawain tries to politely push the Lady away by dancing around the conversation and letting her down easy as he says, “‘Indeed, dear lady, you did better,’ said the knight, And solemnly as your servant say you are my sovereign. May Christ requite it you: I have become your knight’” (Gawain, 1276-1278). The knightliness forbids Gawain from growing as a person because chivalry is all he follows. When the Lady doesn’t get what she wants, she decides to takes another approach and challenges Gawain’s knighthood with a gift of the green girdle that contains magical powers such as immortality.

Gawain finally commits an error by taking this gift from the Lady; the green girdle gives a hint at Gawain’s instability and uncertainty to be an honest knight. He is supposed to do what the Lady does to him back to the Lord, which means that Gawain is expected to give this girdle back to the Lord. Instead, Gawain ends up not doing so and tries to avoid telling the Lord what happened while he was out hunting animals. By sinning, Gawain loses all his virtues as a knight and finally begins to learn the value of life. The other prominent green object in Sir Gawain and the Green Knight is the green chapel, where Sir Gawain and the Green Knight were supposed to meet for battle.

His guide warns Gawain that no one has successfully defeated the mythical creature before. This doesn’t change his decision to fight the green knight. When Gawain finally reaches the Green Chapel, it is described as chaotic just like when the Green Knight interrupts King Arthur’s court. The poet describes it by saying, “It had a hole in each end and on either side, And was overgrown by grass in great patches. All hollow it was within, only an old cavern” (Gawain, 2180-2184).

It outlines the true messiness and disorderliness of the place in great detail. The poet also describes the chapel’s satanic characteristics when he says, “‘O God, is the Chapel Green This mound?’ said the noble knight. ‘At such might Satan be seen Saying matins at midnight’” (Gawain, 2187-2189).

These corruptive characteristics of the Green Chapel foreshadow the outcome of the duel between Gawain and the Green Knight. When the two of them finally encounter each other at the Green Chapel, the Green Knight claims that Gawain isn’t acting like himself, “‘You’re not Gawain,’ said the gallant, ‘whose greatness is such That by hill or hollow no army ever frightened him; For now you flinch for fear before you feel harm” (Gawain, 2270-2272). With his unique weapons, the Green Knight strikes three blows at Gawain, but only one of them has any impact on him.

This scar on his neck is an example of Memento Mori, a keepsake that helps Gawain remember his mortality and ability to commit human error. Sir Gawain learns the true value of life through a convoluted process. He is no longer the chivalrous knight that he originally was because he makes the mistake of not telling Lord Bertilak, who turns out to be the corrupted Green Knight in disguise, about the gift of the magical green girdle. The Lord eventually finds out because he is actually testing Gawain’s ability to be a true knight.

As a consequence of his lie, Gawain ultimately loses his perfectness and virtues. In the denouement of the poem, Gawain continues to wear the green girdle in Arthur’s court also as a Memento Mori, as a reminder of his mistake of lying, which signifies that he is finally learning from it and progressing altogether as a person.

Personality Traits and Development of Sir Gawain. (2016, May 12). Retrieved from http://studymoose.com/personality-traits-and-development-of-sir-gawain-essay 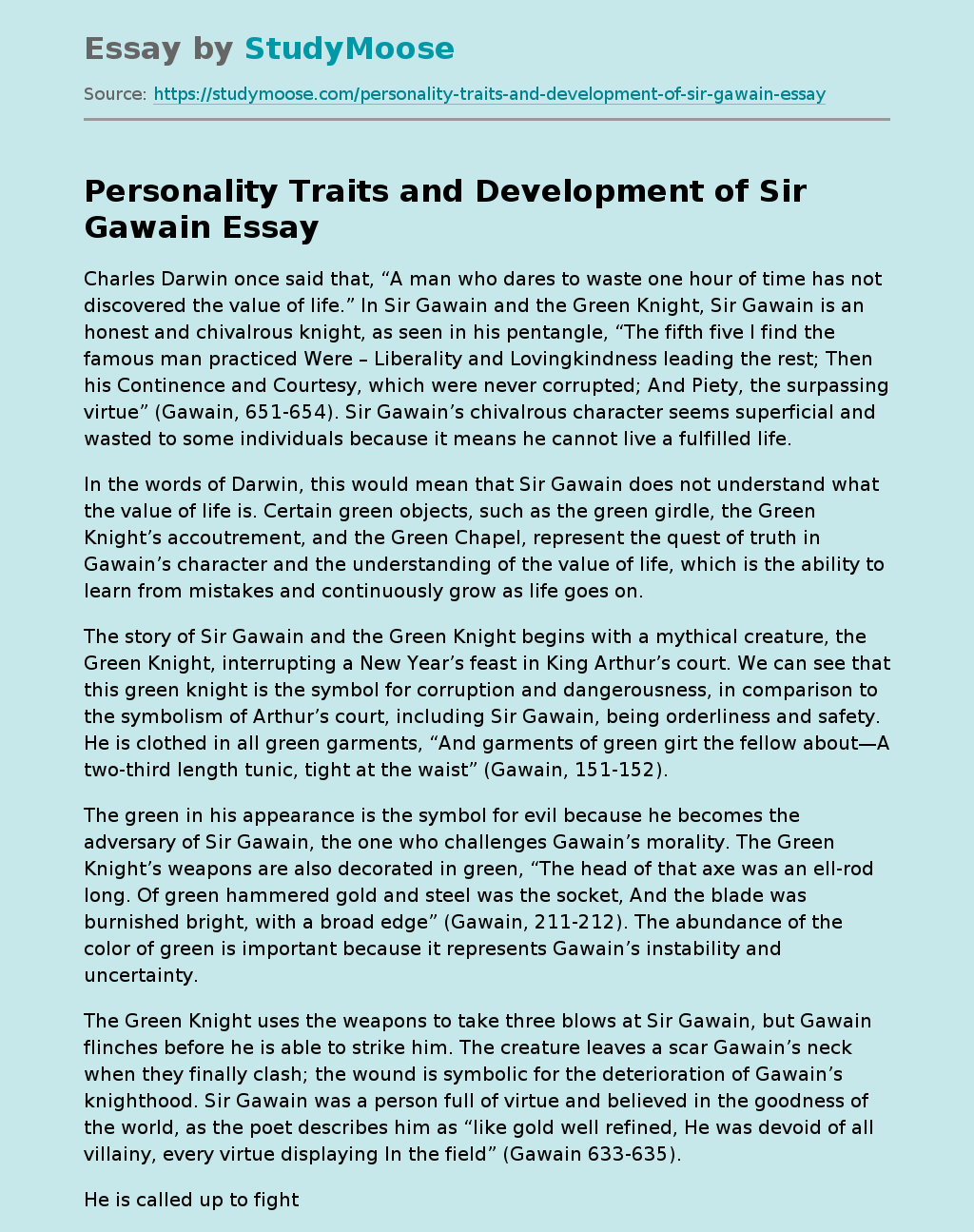