Why did the author of Sir Gawain and the Green Knight include a character with a bizarre complexion and magical abilities? Why do most people do weird things? Unfortunately, there is no obvious reason for the latter; however, there are quite a few explanations for the former. “The Pearl Poet,” as the unknown author is referred, wrote the poem around the late 1300s in England—a time and place in history in which knights, kings, and castles were not just parts of fairy-tales.

One of the most important aspects of English society in the late 1300s was chivalry, or the ideal traits of a knight, which included courtesy, generosity, and romance. From the poet’s advanced literary techniques, many scholars consider him to be an educated man who had a purpose in creating such a peculiar character. Bertilak de Hautdesert, or the Green Knight, is a major character in the story for he serves as the antagonist to Sir Gawain. His set of circumanstances when deciding the challenges present the protagonist of the story with the main difficulties throughout the poem.

Although he has multiple personalities throughout the poem (not only is Bertilak this fabled knight with abilities people can only dream that they have, but also The Host of the castle that Gawain stays at until the time comes to meet his own doom), which makes him a round character. The Green Knight is also definitely a static foil to Gawain. His entire character does not change throughout the poem—he has almost complete control of the events—and presents a contrast for the protagonist of the story.

Although Gawain appears to be seen as possessing civilized characteristics, it is actually the antagonist of the story that possesses these traits. The Green Knight is not just a character with magical abilities, for he represents some of the most coveted human qualities—a friendly, well-rehearsed response to almost every situation and a strong desire to maintain the chivalric duties of society. From the start of the story, it is clear that the Green Knight possesses quite a few superhuman qualities.

His description presents him as the toughest knight in existence. “Lightning like he seemed /And swift to strike and stun /His dreadful blows, men deemed, /Once dealt, meant death were done.” He is strong enough to carry a “helmet-smasher” with a four-foot long axe blade. Everything about his description in the beginning points to him being this freak of nature. His green hue, his green hair, the Green Chapel, and even his green horse represent the natural world. Like a tree being able to grow the same limb multiple times, Bertilak claims the ability to regenerate body parts. As Gawain is pretty confident that he has dealt with this mysterious force by striking off its head, the Green Knight, while bleeding from the deathly blow, picks up his own head and tells Gawain to meet him in a year for an equal strike.

These magical characteristics set the stage for what seems to be the most formidable foe to the protagonist. As the antagonist to Gawain, readers should be terrified and repelled by the Green Knight, but many people are drawn to this mysterious stranger. For what reasons does Bertilak draw the attention of readers? Is it the same reason that many people are drawn to Iago from William Shakespeare’s Othello and to the Joker from The Batman Comics, or is there another reason than being pure evil, which he is not, that the antagonist of this story is so popular? There seems to be no stimulus that can anger the Green Knight. It seems he is unaccustomed to any negative feelings such as hatred or revenge. His emptiness of irrittability is seen throughout the poem. In the context of the time period, lordship and chivalry were important aspects of the cultural norm. As a member of the court of Arthur, the king’s nephew, Gawain, is committed to following Arthur.

When Gawain enters The Host’s house, he is expected to be loyal and obedient to his temporary lord. Gawain receives kisses from this man’s wife. The Green Knight (The Host of the castle) is either unphased by this betrayal or very good at hiding his emotions as seen by the following quote: I pretended one stroke, a threat, a joke, /But left you whole; I had the right, /Because of our other agreement, in my castle; /You kept it faithfully, performed like an honest /Man, gave me everything you got. /Except that you kissed my wife: I swung /For that reason – but you gave me back her kisses. /So all you got, for that, was a puff /Of air. /An honest man /Need never fear.

No man would consider another an honest man when secretly kissing his wife, and not many people would do well when put in a situation like the one Bertilak is in during the poem. This is just one example of the Green Knight’s will to respond well to any kind of stimulus in the environment. The stealing of the girdle by Gawain presents the character foil of Sir Gawain as none other than Bertilak when he does not act violently as a result of Gawain’s non-chivalric behavior. Using magic would have been cheating, and cheating was strongly prohibited in the rules of chivalry.

Chivalry—readers hear of this word every day when discussing Medieval Europe—had a strong influence on knighthood in the society in which the Pearl Poet lived. In the poem, Sir Gawain is supposed to represent this perfect knight, but his foil comes up the victor in almost every test of chivalry that Gawain is put in by the Green Knight. The Green Knight maintains his chivalric duties to society in almost every situation in the story. He might be a superhuman freak of nature who mysteriously appears at just the right time to King Arthur’s response for a marvelous story by someone in his court and demands for someone to play a game, but he does all of this in a well-behaved manner that seems to represent the most virtuous knight.

As The Host, he is also seen as a respectable, noble man who clearly fits the definition of a civilized man. The most important aspect of all his characteristics is the fact that he is this immortal creature that determines the rules, yet he abides by the rules even when his foil tries to cheat and manipulate the circumstances so that he can win. It is this noble distinction that clearly sets the fine line between artificial knighthood seen in Sir Gawain and the real deal seen in the personality of Bertilak de Hautdesert.

As is shown in Sir Gawain and the Green Knight, misconceptions of reality can pose a threat to the naked eye’s perspective. Gawain definitely is not a chivalric knight: he steals kisses from a lord’s wife, he cheats when attempting to use the “magical” girdle, and he succumbs to his instinctual fear of mortality when put in the events of the poem. The Green Knight, on the other hand, represents not only the divine traits of nature but also the true representation of what a knight should be: his well-mannered response to stimulus and his duty to maintain the code of chivalry. Readers should take some time to examine the situation at a microscopic level. Even though he is an immortal force of nature that can design his own circumstances, he abides by the rules set fourth by himself and by society, which is why people are so attracted to him. 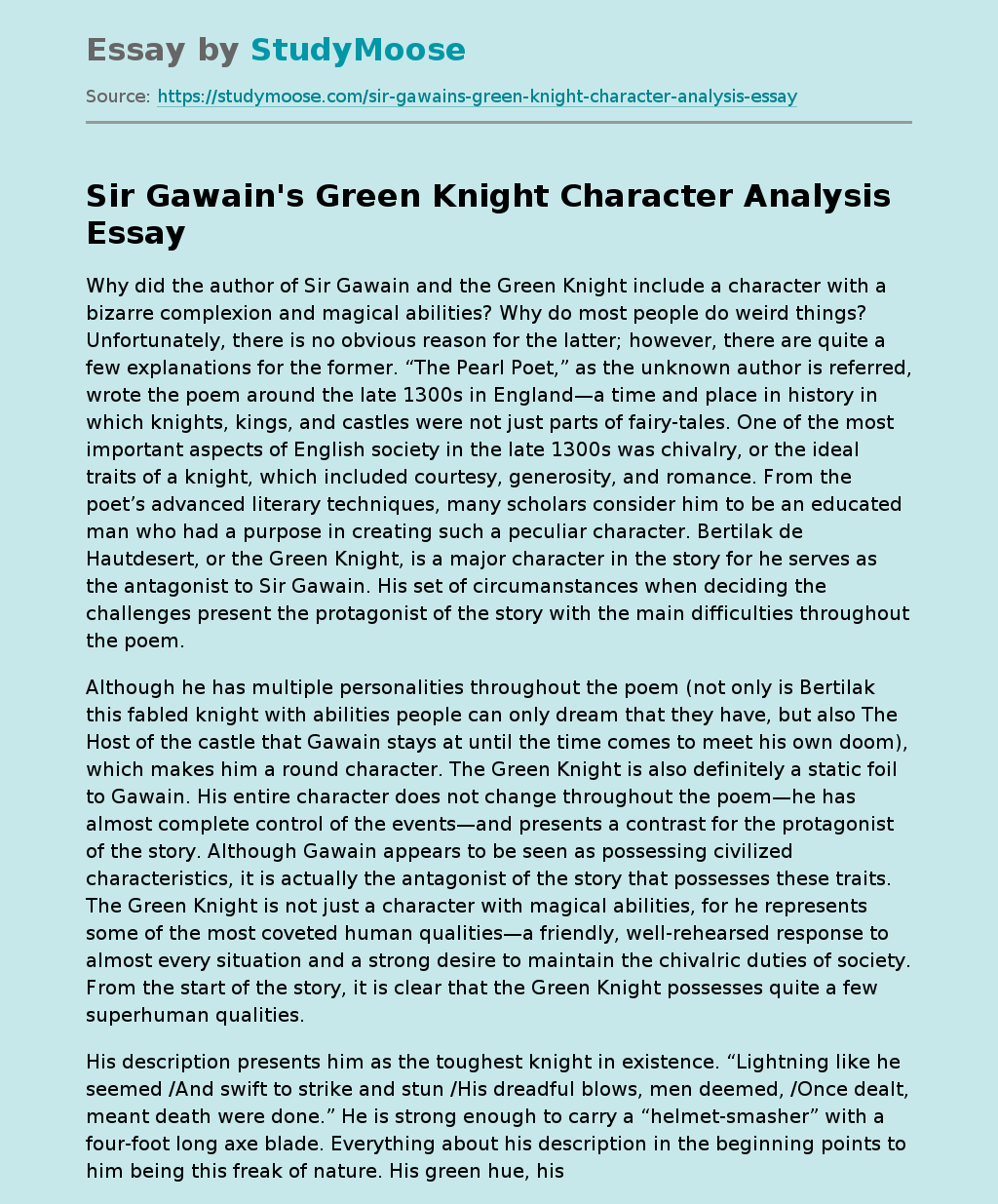