Beowulf is an Old English epic poem about heroism, bravery, and loyalty. Throughout the story, we learn that good constantly defeats evil, but we fail to question the similar qualities and characteristics both sides possess. Beowulf is considered a hero because of his exceptional fighting skills, considerable strength, and great loyalty. He proves this by defeating Grendel, killing Grendel’s mother, and slaying the dragon. Though the three creatures allow Beowulf to prove his courage in battle, that is not their sole purpose in the poem.

Don't use plagiarized sources. Get your custom essay on
“ Beowulf: Epic Poem About Heroism ”
Get custom paper
NEW! smart matching with writer

Victoria Symons, an Honorary Lecturer at University College London argues that the point of the poem is that similar qualities can be found in both heroes and villains, and we come to this conclusion by finding the true meaning of the creatures in the story. Throughout this paper, I will discuss the roles each monster plays and will analyze Symon’s interpretation of the poem to reveal the meaning of each monster.

Despite their issues, Beowulf and Grendel share similar characteristics. Both characters are powerful in battle, have never been defeated, and have an immense amount of pride and ego. Both characters are also lonely and isolated. In her analysis, Symons notes that like Grendel, Beowulf arrives in Denmark as an outsider, without notice, and without authorization. Another similarity is that both characters fight without weapons or armor. So, what is Grendel’s purpose? Symons points out that family affiliation is a recurring theme throughout this poem. The whole story starts with a prologue that runs through four generations of Hrothgar’s family tree before any activity happens.

Throughout the poem, characters are recognized by their relationship with others. Symons notes that the ability to be placed in a family is central to the social interactions of the poem. Everything we know about Grendel is that he’s descended from Cain and that he has a mother, although the poem never mentions her name. Grendel is, therefore, an outsider. Symons makes an interesting argument that the threat he represents to the human world of the poem is simply that he has no stake in it. Grendel is thus unplaceable represents isolation.

After Grendel dies, the Danes are attacked again by Grendel’s mother who’s looking for revenge. Her appearance is like Grendel’s, but her attack strategy differs significantly. Grendel’s mother attacks for one simple reason, justice. Rather than causing extensive damage, she kills only one person before leaving home with her son’s arm. The man she chooses is Esher, Hrothgar’s most trusted friend. The killing of the advisor was meant to match the loss of her only son. This is an intriguing viewpoint because I was under the impression that she simply wanted justice for her son. Symons mentions that in a society that’s defined by loyalty and family ties, revenge poses problems by initiating violence, destruction, and unpredictability. We see this unfold following the slaying of Grendel after his mother seeks revenge. The dragon, on the other hand, is a literal threat to the safety of Beowulf’s people and represents a mortal danger. Earlier in the poem, Hrothgar makes a speech warning against the dangers of greed, and rewards Beowulf with gifts and weapons in return for killing Grendel and his mother. We learn that this is what a good leader does, but the dragon, in contrast, doesn’t behave like this at all. The destruction it causes on an entire land is instigated by the theft of a single gold cup from its hoard. Greed is a serious concern in Beowulf. Reflecting heroic Anglo-Saxon societies, the poem’s human characters live and die by the generosity of their rulers. In standing against the dragon, Beowulf also stands against the greed it represents.

In conclusion, Victoria mentions that if Grendel’s isolation marks him as a monster, we should find the likeness in Beowulf’s character unsettling. Grendel’s mother may be motivated by vengeance, but Beowulf’s response to her attack is similar. The keenness with which Beowulf urges vengeance contrasts with Hrothgar’s muted sorrow. Symons mentioned something that I failed to notice when reading the text. She states that an Old English word is used several times in the poem to describe Grendel: ‘aglæca’. She mentioned that the same term is later used to describe Grendel’s mother and the dragon. The old English word it’s also used to describe Beowulf. This raises the question of how we should translate this word that somehow describes both the best and the worst of characters. Symons taught me that in the world of Beowulf, where humans and monsters act from the same motives, characters are described using the same words. In the end, the line between hero and villain comes down to a matter of perspective: someone’s Beowulf is another’s Grendel. Symons teaches the reader that peace is fragile in the world of Beowulf, and it can be easily overturned by greed, or feuding, or social isolation. 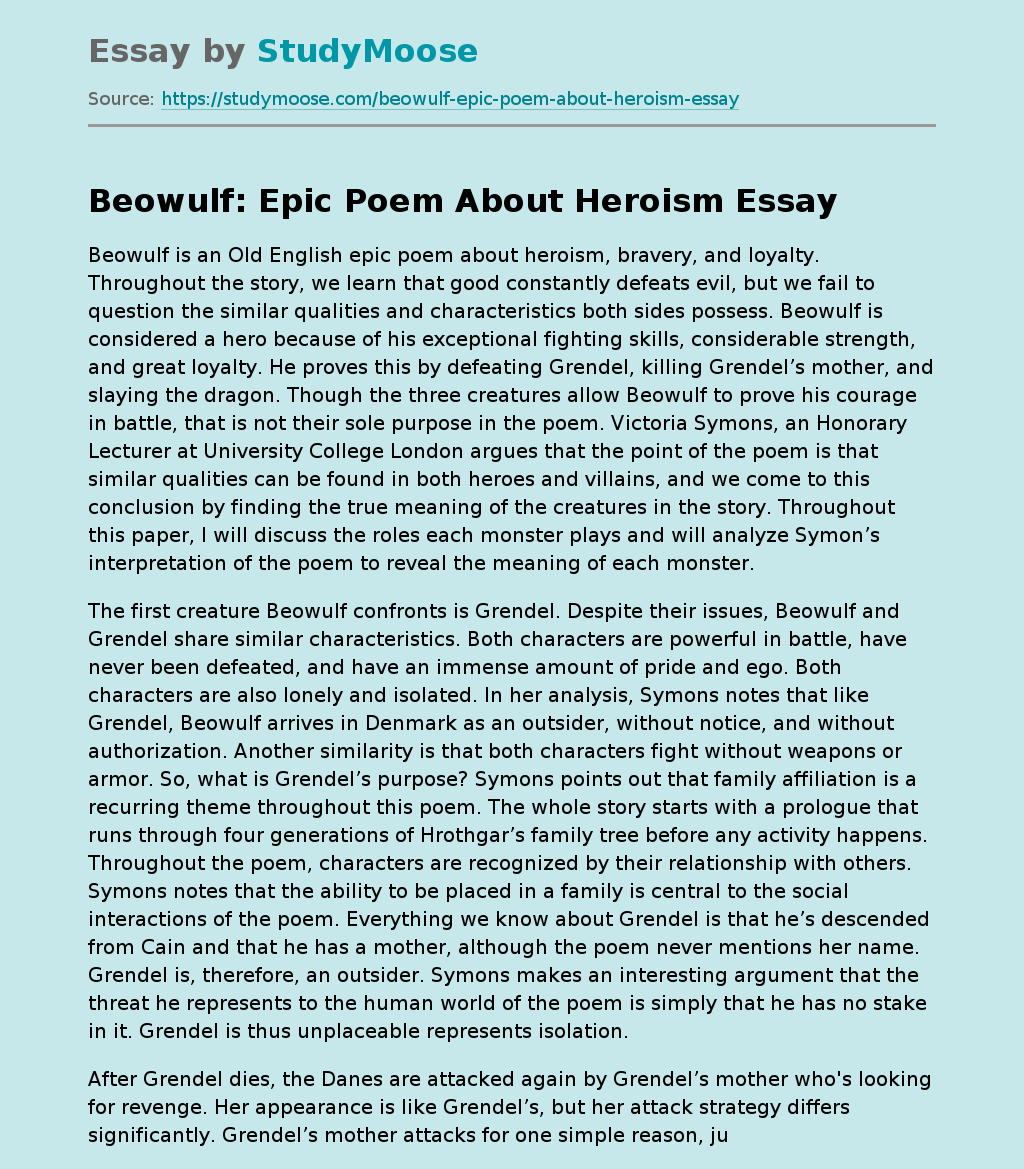