Archimedes was one of the most known and respected mathematicians of ancient Greece. He was born between the years of 290 and 280 BCE in Syracuse, Sicily which is currently known as Italy. His death took place in Syracuse, Sicily between the years of 212 and 211 BCE. In autumn of 212 or the spring of 211 Syracuse was taken over by Roman General Marcus Claudius Marcellus (Encyclopedia Britannica, n. d). It was during the cities take over that Archimedes was killed. There is rumors about what lead up to a Roman solider killing him.

Don't use plagiarized sources. Get your custom essay on
“ Archimedes ”
Get custom paper
NEW! smart matching with writer

Some historians believe his death was due to Archimedes not willing to give up his mathematical diagrams of mirrors that would burn the Roman ships. The exact years of his birth and death are uncertain, but Greek historian John Tzetes believes he lived to be 75 years old (“Archimedes”, n. d). Archimedes father was named Phidias who was an astronomer. His mother’s name is unknown, but there is belief that Archimedes is related to the Ruler of Syracuse King Hiero II.

There are currently not many documents of Archimedes upbringing. In fact there is only one record of his life that was written by his friend Heracleides.

Unfortunately this biography was lost. Education Archimedes was not only a mathematician but also a physicist, engineer, inventor, and astronomer (“Archimedes”, n. d). Archimedes thought of himself as first a mathematician and secondly an inventor, his other qualities where simply additional characteristics. He received his knowledge by spending most of his life studying in Syracuse but did spend some time in Alexandria and Egypt possibly with another ancient mathematician known as Euclid.

Besides Euclid, Archimedes partnered with other mathematicians of his time.

These mathematicians are Conon of Samos and Eratosthenes of Cyrene. Along with studying with these individuals, Archimedes published some of his works in correspondence with them. These published essays include The method of Mechanical Theorems and the Cattle Problem (“Archimedes”, n. d. ). Greatest Accomplishments Archimedes is famous for several great accomplishments by many during his time period and individuals within this present time period. He is known to have written several books and other types of work. One book which is actually divided into two books is called On the Sphere and Cylinder.

On the Sphere and Cylinder describes characteristics of spheres and cylinders as identified by Archimedes. He goes into detail the surface area of any sphere has a radius that is four times that of its greatest circle and the volume of a sphere is two-thirds that of the cylinder in which it is inscribed (Encyclopedia Britannica, n. d. ). Archimedes was so proud of his discovery that he had his tomb marked with a sphere inscribed within a cylinder. The tomb was found in 106-43 BCE by Marcus Tullius Cicero (Encyclopedia Britannica, n. d. ). Another one of his greatest accomplishments would include his determining of the exact measurement of pi.

He was one of the first mathematicians to begin studying PI. He began his study of PI between the years of 287 and 212 BCE. His studies determined PI equals 223/71 < PI< 22/7. His results are related upon approximating the area of a circle based on the area of a regular polygon inscribed with the circle and the area of a regular polygon within which the circle is inscribed (“PI”, n. d). According to his work he started with studying a hexagon and worked his way up to the polygon with 96 sides (“PI”, n. d). This was deemed very impressive back in his day and in the current modern day.

The device was simple in design and efficient at moving both liquid and solid particles. This invention that was intended to originally pump water out of the bulge of a luxury ship led to an agricultural device used to pump irrigation water up a gradient and still used by modern day farmers. Around 211 BCE Archimedes formulated the “hydrostatic principle” also known as the Archimedes principle. The Archimedes principle demonstrates how an object’s density when immersed in a specific volume of fluid will sink or float. The formula is described as W=pVg (“Archimede’s Principle” n. d).

The King was concerned the crown was not pure gold as he had requested. He was convinced it was mixed with silver. So, the King approached Archimedes with his concern. Archimedes decided to take a bath. This bath is what leads to one of the greatest discoveries of all times-the Archimedes Principle. While in the bath he discovered that the exact amount of water equivalent to his submerged body mass overflowed the edges of the tub. After realization of his discovery he was so excited he jumped out of the tub and ran out of his home into the streets of Syracuse screaming “Eureka, Eureka”.

The term eureka stands for “I have found it”. Besides the invention of the Archimedes Principle, the commonly used term of Eureka can be credited to Archimedes himself. Before his death between the years of 212 and 211 BCE, Archimedes played an important role in the defense of Syracuse against the Roman navy. He invented what was known as “war machines”. He constructed these machines so effectively they delayed the initial capture of the city of Syracuse. Archimedes created these machines by applying his knowledge of mathematics and science he used devices known as pulleys, and levers.

These war machines consisted of several aspects of his inventions. Some of these aspects include stone throwers, and large crossbows. Other characteristics of his war machines included the use of the Archimedes claw. The Archimedes claw uses a crane and grappling hook to reach down and grab the Roman galleys. This action ultimately leads to capsizing them (“war machines” n. d). Besides these great inventions that deterred the Roman navy for quite some time, Archimedes included the use of mirrors or polished stones to focus direct sunlight into a point and would cause the wooden ships owned by the Romans to become engulfed in flames.

This concept of using mirrors to catch fire to the Roman ships is known as the “Archimedes Death Ray” (“war machines” n. d). This one invention is thought to have been the ticket to his death. According to history the Romans wanted the designs so significantly that if Archimedes did not render them over he would be killed. Archimedes can be thought of as a hero that fights for what he believes in, he refused to hand over his invention and death was his only option. Conclusion Archimedes can be credited with the title of one of the world’s most knowledgeable mathematicians and inventors.

He was highly thought of during his time period and his wisdom still lives on in modern day society. Archimedes has created several inventions and contributed several mathematical concepts. To sum up some of his most known and most important inventions they are determining the measurement of PI, the Archimedes Screw, the Archimedes Principle, and his creation of war machines. Even after his death in Syracuse around 212 or 211 BCE, his mathematical concepts did not die with him. His inventions and knowledge will continue to be acknowledged, studied, and taught well into the future. 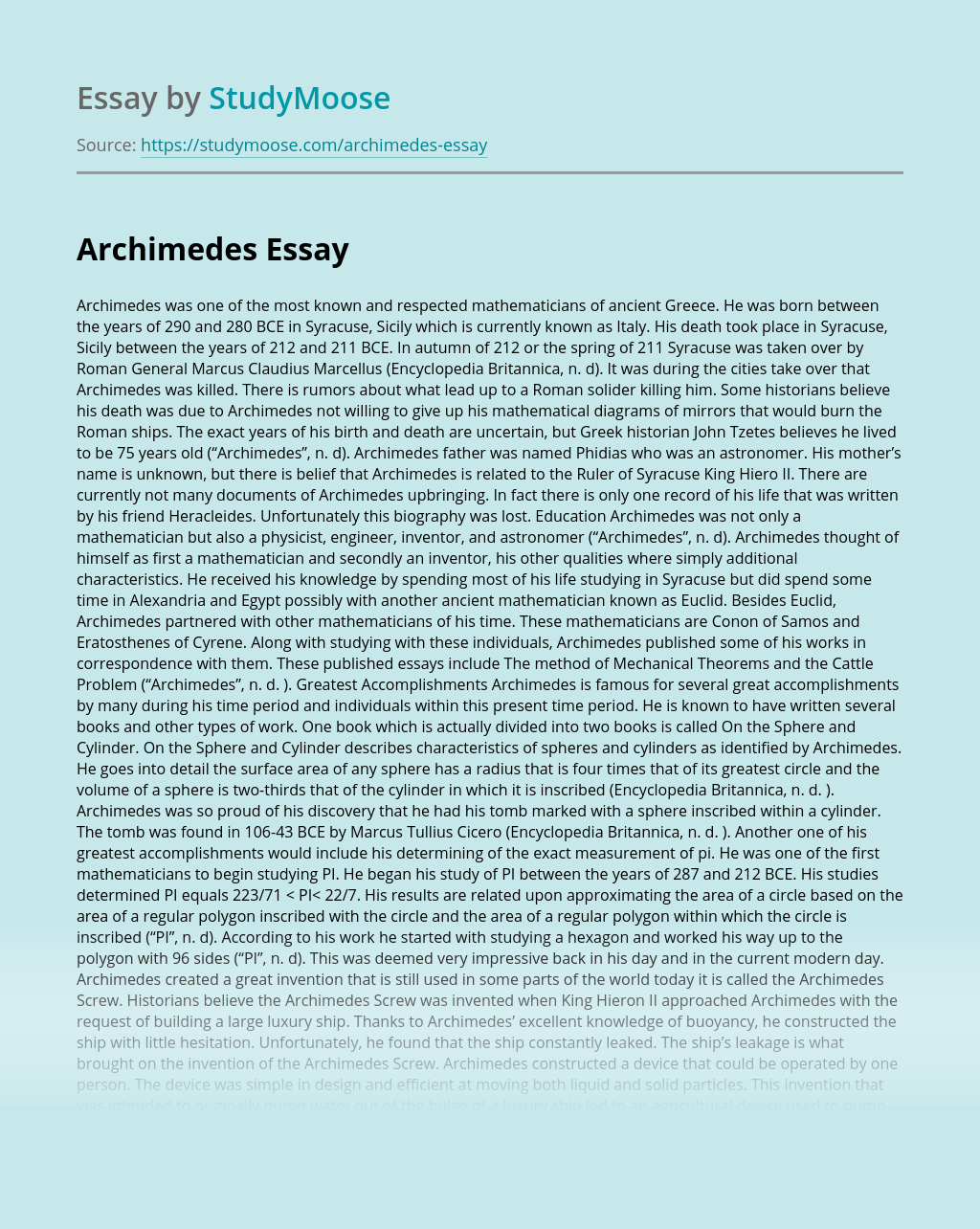