Should Science and Mathematics Be Taught in English

English, by any standard, is a dominant language of the developed world. It is now a medium of instruction in the world and should be taught in Mathematics and Science subject. The implementation of English in science and mathematics in school is essential due to the use of the English language globally. However, teachers who are incompetent in English will have difficulties with the change of language used in the subject and teaching school subjects in the local language enhances understanding for learners as well as paves the way for more potential natural development.

Don't use plagiarized sources. Get your custom essay on
“ Should Science and Mathematics Be Taught in English ”
Get custom paper
NEW! smart matching with writer

Contributing to English’s status as the world’s most common second language is that it allows students to play on global platform, have career advantages and easier information access. Teachers will face difficulties in the change of language in school subjects especially for those who are incompetent in English. The Malaysian government declared to execute a new policy in the national education system in 2002 which is to implement the English language in schools for teaching of Mathematics, Science and technology subjects.

The Malay language was formerly used as a language of instruction in these subjects (Ong and May 2008, 142).

This act has affected many teachers and students around Malaysia, mainly those who have poor English background. The change of implementation of language used will lead to change in teaching practice as well (Ong and May 2008, 149). They will have to look for efficient teaching methods to make sure students understand the terms and definition of the subjects in English and their local languages and it will not be an easy task.

Language use to teach Mathematics and Science will be reverted to Bahasa Melayu in national schools or in vernacular school on 2012 onwards which was decided by the Malaysian cabinet.

Teachers who are competent in English in secondary school is only 19. 2% and 9. 96% of primary school”, Deputy Prime Minister Tan Sri Muhyiddin said, explaining to the Government’s decision to change to education system back to Malay ( The Stars 2009). Research on students in urban and rural area was made and graphs on Achievement trends Grade in UPSR for Mathematics and Science subject was made (Refer to Appendix 1 ). In addition, learning school subjects in local language enhances the understanding for learners especially for those non-English speaking countries (Refer to Appendix 2).

Teaching school subjects in their local language paves the way for more potential natural development as well as making their countries proud. Many great mathematicians who has shown great performance abroad comes from China (Xinhua News Agency 2004). There are students who are intelligent but the language used to teach in schools are one of the factors that affects the students performance. There are many non-English speaking countries in the world which has modern technologies and are developed which are on par with some of the most advance countries.

Countries such as Hong Kong, Japan, South Korea and Taiwan has students, mainly in the eighth grade that continuously achieve Mathematics and Science with excellence and these countries uses their local language to teach their basic education and only uses English as a part of a compulsory curriculum. It is ironic that English-speaking countries such as United States and Philippines are among the rare end in Mathematics ( Tapang 2012). It shows that teaching school subjects in local language can also bring up the standards of the country to world class level.

Teaching Mathematics and Science in the vernacular is not an obstacle to achieving excellent grades in those subjects and it could also hold firm a country’s language status and bring it up to a world class level. Nevertheless, the use of English language is expanding throughout the world and people can interact internationally and are able to share their opinions and knowledge without having any worries of communicating. English as a language of instruction in school subjects allows students to play on global platform, being able to have career advantages and having information access of one’s desire easily.

Firstly, the purpose of teaching Mathematics and Science in English is so that students can improve their English language as well as knowledge in the field on both science and mathematics. Being able to have a good command of English is to consistently be at an English speaking environment, for instant, studying in English (“Current Importance of Education In English” 2013). Students who converse in English among themselves in school every day will be well verse in the language. This can be a good exposure for students to improve their speaking of the language which can help in the nderstanding of the subjects used in English.

Countries in Asia, for instant, China, South Korea and Taiwan, students who are studying in the Third grade starts to learn English in school. Professionals who had done research claims that the mastery of the English language is due to the early education of the language ( “The Importance of Learning English “ 2013). Foreigners may be hired to teach students English or local teachers who has a good English background teach their students in their own native language (Refer to Appendix 3).

The change of the language of instruction back to Bahasa Melayu will not help in the advancement of the education system in Malaysia. The development of the student s’ proficiency in English will not progress if the school subjects are taught in Malay (Eng 2012). It is a fact that English is an international language and it is widely used around the world and the switching of medium of instruction in school subjects is one of the factor that prevents individual to expand their understanding even further due to the confusion of the terms used.

Next, the advantage of learning these subject in English is that it educate students in valuable skils in a far-reaching language, which prepares them to enter the workplace with both. It is undeniable that good education qualities lead to high salary job. Jobs are everywhere but quality education ensures career advantages in this competitive world. Education Secretary Michael Gove said “ Employers demand for good requirement in both English and Mathematics. ”( Couglan 2011). In today’s society, having quality education is important especially in developed countries whereby it is needed to secure ourselves jobs.

However, those who are poor in English will find it difficult to communicate with companies from other country It is an added advantage for students to be competent in the English language because upon completion of the education, they will be able to perform worldwide with this asset on their hands ( Faizah, Aziz and Jusoff 2011, 36). Powerful command of English and a broad knowledge in the field of science gives graduates access to high-paying fields such as engineering, medicines, science and technology and many more. Lastly, learning science in English gives students access to unlimited information.

Unlike countries which uses local languages in science and mathematics which gives limitation in finding information through the world wide web. There will find difficulties in understanding the English language. Since most of the resource in the internet are written in the English language, users who competent in English will be able to gain access to it without a haste ( Faizah, Aziz and Jusoff 2011, 36). Besides the internet, journeys as well as reference book are mostly written in English and those written in other languages are limited. This indeed constitutes a considerable academic advantages to learning mathematics and science.

Should Science and Mathematics Be Taught in English. (2016, Oct 29). Retrieved from http://studymoose.com/should-science-and-mathematics-be-taught-in-english-essay 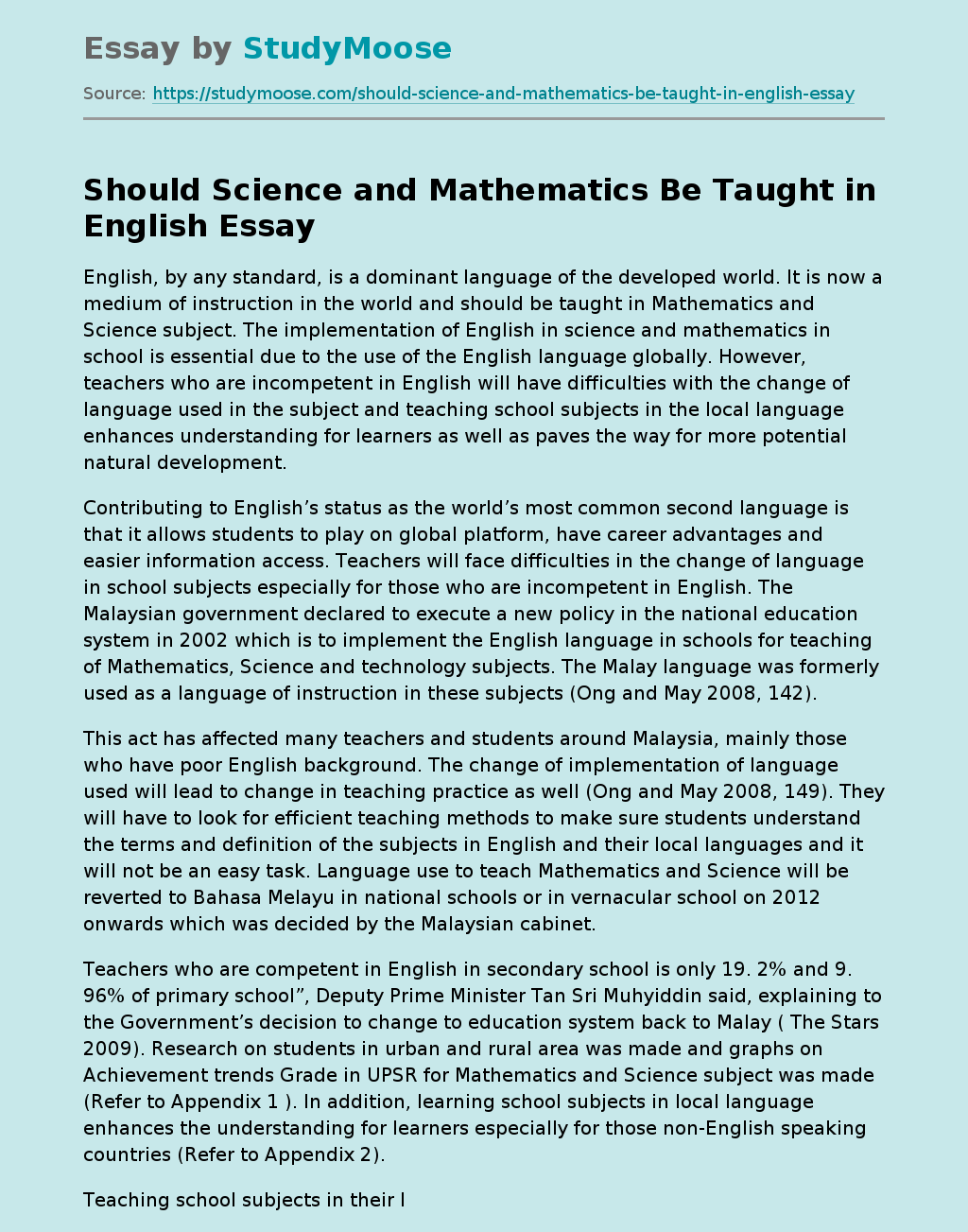