Andrew Carnegie And The Rise of Industrial Capitalism

Andrew Carnegie was one of the captains of American capitalism of the 19th century. He was also one of the creators of the American steel industry, and this helped him to become one of the richest men in the world. Carnegie regretted many mistakes he made during his period of personal enrichment and gave his fortune to cultural, educational, and scientific institutions to improve humanity.

Carnegie came with his family from Scotland to the United States in 1847. They settled in Allegheny, Pennsylvania, in an immigrant neighborhood called Slabtown.

Don't use plagiarized sources. Get your custom essay on
“ Andrew Carnegie And The Rise of Industrial Capitalism ”
Get custom paper
NEW! smart matching with writer

His ability and willingness to always work hard for what he wanted would help him now with upcoming opportunities. His life began to change when he was hired as a secretary and telegraphist by Thomas A. Scott in the Pennsylvania Railroad Company at the beginning of 1853. Before the American Civil War began, Carnegie collaborated with the man that invented the sleeper car for first-class travelers; Mr. Woodruff. The sleeper cars facilitated business trips for distances of approximately 500 miles.

This investment was a total success, and it brought Carnegie and Woodruff many benefits. Young Carnegie became the Superintendent of the Pennsylvania Railroad’s Western Division and introduced several improvements to the service. Later on, he was designated as Superintendent of the Military Railways and the telegraph lines of the Union Government in the East. Carnegie helped open the railroad lines entering Washington that the rebels had cut; he leads the locomotive carrying the first brigade of Union troops until they reached Washington. After the defeat of the Union forces in Bull Run, he personally supervised the transfer of the defeated forces.

Under his organization, the telegraph service provided an efficient service to the Union cause and helped considerably the final victory.

The Civil War served as an impulse for the steel industry since, by its end, more iron began to be demanded the reconstruction and modernization of railways throughout the United States. Carnegie saw potential in this industry and, eager to explore new business opportunities in it, resigned from his position at the Pennsylvania Railroad. It was one of the most dangerous movements he made in his career, as he ran the risk of being ruined, but in the end, it turned out to be his best decision. He turned his attention to the replacement of wooden bridges with iron bridges and in three years, he already had an annual income of approximately fifty thousand dollars.

His most visionary project at the beginning of his career was the construction of a one-kilometer bridge over the Mississippi River to connect the city of St. Louis with the far West. Carnegie knew that in order to achieve a bridge that was tall and strong enough, he had to use stronger material than iron. Therefore, he thought of steel, which was risky as it was very expensive and had never been used before for infrastructure construction. Even so, Carnegie, who was a talented person for the speech, managed to convince many entrepreneurs to invest in the project. The bridge over the Mississippi was completed in 1874 and that not only catapulted the success in the steel business but also opened up new possibilities for the modernization of the United States using the same material for building construction.

He implemented a new steel refining process that was used by the Englishman Henry Bessemer to increase the production and quality of it. To do this, he again made high investments that involved a lot of debts, which he could pay by reducing production costs. These investments began to bear fruit with the beginning of the era of steel in the United States, which meant the construction of skyscrapers in cities such as Chicago and New York.

Carnegie decided to sell the company to the executive and banker J.P. Morgan for a price of four hundred and eighty million dollars. Upon completion of the transaction, Andrew became the richest man in the world, with a personal value that today would amount to almost four times the fortune of Bill Gates.

At the age of sixty-one, Carnegie’s life had changed dramatically. Regretting many of the things he did in the past to get his money, he decided to spend the rest of his life doing charity, using his fortune to help many people. Being a fan of reading, he wanted the New York Public Library to open more branches; therefore, he donated a great amount of money. In 1904, he founded what we know as the Carnegie-Mellon University, which at that time was The Carnegie Institute of Technology in Pittsburgh. The following year, he created the Carnegie Foundation for the Progress of Teaching and then the Carnegie Foundation for International Peace in 1910. He made numerous other donations, and it is said that more than two thousand eight hundred libraries were opened in the United States thanks to his financial support.

Atypical industrialist, Andrew Carnegie defended the right of his workers to unionize while imposing very hard-working conditions on them. A supporter of the social Darwinism of Herbert Spencer, he was convinced that most people can make a fortune if they have the necessary education and have the courage. He also wrote several books and numerous articles. In his 1889 article, called ‘ Wealth,’ he explained that those who have great wealth must be socially responsible and use their assets to help others. The theme was extended in a book he published in 1900, called ‘The Gospel of Wealth.’ He died in 1919, in Lenox, Massachusetts at the age of eighty-three, and even today, he is remembered as one of the great executives responsible for the impulse to modernity.

Andrew Carnegie And The Rise of Industrial Capitalism. (2020, Nov 25). Retrieved from https://studymoose.com/andrew-carnegie-and-the-rise-of-industrial-capitalism-essay 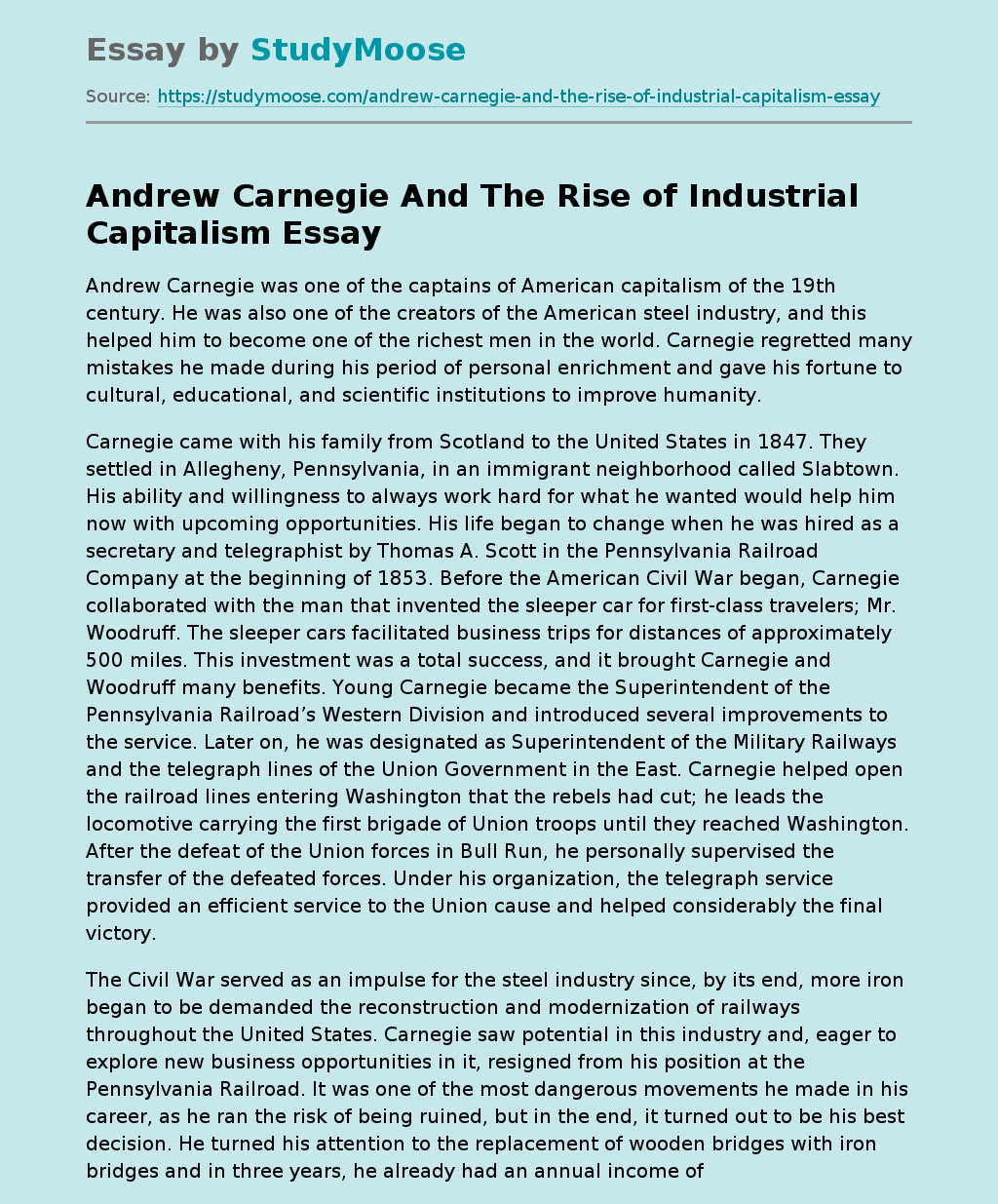