Some historians argue that the Revolution was solely aimed at achieving the limited goal of independence from Britain. There was a consensus among the Americans about keeping things as they were once the break from Britain had been accomplished The Revolution was inevitably viewed as a struggle of liberty versus tyranny between America and Britain. The Revolution was “radical in its character,” according to Bancroft, because it hastened the advance of human beings toward a millennium of “everlasting peace” and “universal brotherhood.

Don't use plagiarized sources. Get your custom essay on
“ American Revolution Notes: Radical or Moderate ”
Get custom paper
NEW! smart matching with writer

” The imperial school believed that political and constitutional issues brought on the Revolution.

The Progressive historians held that the primary causes were social and economic. Gipson claimed the British were justified in taxing the Americas and tightening the Navigation Acts after 1763, because largely British blood and money had been expended in the “Great War for Empire,” 1754-1763 (French and Indian War). Carl L. Becker, Charles A. Beard, Arthur M. Schlesinger Sr., and J. Franklin Jameson stressed class conflict as well as insisted the political or constitutional ideas had an underlying economic basis.

Disenchantment of the merchants with British rule, said Schlesinger, arose from the economic reverses they suffered as a result of the strict policy of imperial control enacted by the mother country after the French and Indian War.

The merchant class later became, in Schlesinger’s words, “a potent factor o the conservative counterrevolution that led to the establishment of the United States Constitution.” In the struggle between colonies and the mother country, the Americans emerged as the “conservatives” because they were trying to keep matters as they were before 1763.

Daniel J. Boorsten argued that the revolution was conservative on the imperial as well as the local level because Americans were fighting to retain traditional rights and liberties granted to them under the British constitution.

In refusing to accept the principle of no taxation without representation, Boorstin wrote, the patriots were insisting upon an old liberty, not a new right. The colonists, according to Bailyn, were convinced that there was a sinister plot against liberty in both England and America. Americans believed the conspiracy had succeeded in England and that America represented the last bastion or the defense of English liberties and the freedom of all mankind. Bailyn took issue with the Progressive historians who declared that the patriot leaders were indulging in mere rhetoric when they employed such words as conspiracy, corruption, and slavery.

The colonists meant what they said; the fear of conspiracy against constitutional authority was built into the very structure of politics, and these words represented “real fears, real anxieties, [and] a sense of real danger.” Nash concluded that social changes had turned these seaport communities into “crucibles of revolutionary agitation.” The increasing poverty and the narrowing of economic opportunities resulted in resentment and rising class consciousness among segments of the artisan class. Some [New Left Historians] pictured the Revolution as a social movement – an internal struggle within the colonies – caused in part by class antagonism.

Gross’s conclusion was conservative – that the townspeople had gone to war not to promise social change, but to stop it. Some of the new social historians suggested the Americans may have been caught up in a serious identity crisis as a people on the eve of the Revolution. Such historians saw Americans as profoundly conflicted toward the mother country. To Shy, the war was not an instrument of policy or a sequence of military operations solely, but rather a social process of education.

The Radicalism of the American Revolution, by Gordon Wood, suggests that the Revolution ushered in a new American no longer hampered by habits of deference, feelings of inferiority, or hesitation about economic advancement. Wood, like Bailyn before him, insisted on the Revolution’s radical transformation of ideas of property, work, and the self. Property no longer meant simply land; it also meant personal wealth “dynamic, fluid, an evanescent… which,” claimed, unlike land “could not create personal authority or identity.” Work, not leisure, suddenly defined Americans, and most important, the Revolution gave Americans a sense of equality and “self-worth.”

This repudiation explains the overdetermined nature of the outraged response to Great Britain’s provocative policies in the years before the Revolution. They [Americans] felt the sting not only of extra taxes and burdens of maintaining the British military presence, but also the humiliation of rejection from participation in an Englishness they believed they shared.

While Breen’s revision returned to an earlier view of the ideological origins of the Revolution, nevertheless he agreed with Bailyn, Wood, and, in a modulated way, Bancroft, that the Revolution had, in the long run, radical results. R. R. Palmer compared the intellectual and ideological trajectories from the American and French revolutions, finding more political consensus and continuity in the United States despite greater levels of inequality. In France, on the other hand, he contended that there had been less stability and more open conflict over class than in the United States.

Four new elements in particular influenced how the colonists imagined themselves within the Anglo-American world: the developing military strength of Great Britain, the spread of a consumer-oriented economy, the creation of a self-conscious middle-class culture, and, most significant for our purposes, the stirrings of a heightened sense of British national identity.

Franklin announced that Americans “must ‘know,’ must ‘think,’ and must ‘care,’ about the country the chiefly trade with. Ordinary people – laboring men and women as well as members of a self-confident middling group – who bellowed out the words to the newly composed “Rule Britannia” and who responded positively to the emotional appeal of “God Save the King” gave voice to the common aspirations of a militantly Protestant culture. P. J. Marshall remarks, British nationalism had an extremely adverse impact on men and women who did not happen to live “at home.”

According to Marshall, “English people could perhaps envisage a common community with the Welsh and, often with much difficult, with the Scots, but they failed to incorporate the Irish or colonial Americans into their idea of nation.” At midcentury, therefore, colonial Americans confronted what must have seemed a radically “new” British consciousness. It was this fluid, unstable context that colonist on the periphery attempted to construct their own imagined identity within the empire.

Confronted with a sudden intensification of British nationalism, the colonists’ initial impulse was to join the chorus, protesting their true “Britishness,” their unquestioned loyalty to king and constitution, and their deep antipathy for France and Catholicism. We must pay close attention here to chronology, to the different phases in a developing conversation with England as the colonist moved from accommodation to resistance, from claims of Britishness to independence.

European settlers of an earlier period had, of course, struggled with some of the same issues, alternately celebrating and lamenting the development of cultural differences. But whatever the roots of the challenge, dramatic changes in English society, several of which we have already examined, forced provincial Americans for the first time to confront the full meaning of “Britishness” in their lives. Like Franklin, Belknap assumed that England and America were equals.

The success of one directly contributed to the success of the other. Both found fulfillment in their common Britishness. According to Belknap, the brilliant leadership of William Pitt during the Seven Years’ War “had attached us more firmly than ever, to the kingdom of Britain. We are proud of our connection with a nation whose flag was triumphant in every corner of the Globe…. We were fond of repeating every plaudit, which the ardent affection of the British nation bestowed on a young monarch [George III], rising to ‘glory in the name of Briton.”

As became increasingly and distressingly obvious during the run-up to independence, heightened British nationalism was actually English nationalism writ large. Ploughjogger [John Adams] stated that the source of anger was not so much parliamentary taxation without representation as it was the sudden realization the that British really regarded the white colonial Americans as second class beings, indeed as persons so inferior from the metropolitan perspective that they somehow deserved a lesser measure of freedom. The Reverend Samuel Sherwood of Connecticut protested that colonists were “not an inferior species of animals, made the beast of burden to a lawless, corrupt administration.

Lee remarked with obvious resentment, despite superior family background, the Virginians of his own generation “are treated, not as the fellow-subjects but as the servants of Britain.” Adams concluded that it was the English who had projected a sense of difference and inferiority upon the colonists. “American” as a descriptive category seems in this highly charged context to have been an external construction, a term in some measure intended to be “humiliating and debasing.”

Richard L. Merritt discovered that “available evidence indicates that Englishmen began to identify the colonial population as ‘American’ persistently after 1763 – a decade before Americans did so.” P. J. Marshall again reminded us that “the rise of the concept of ‘American’ owed quite a lot to British usage.” The Stamp Act crisis came after an intense burst of Imperial royalty during the Seven Years’ War, and the colonists felt badly betrayed. Bailyn concluded that when Parliament attempted to tax the colonists without representation, Americans assumed the worst.

Events appeared to be fulfilling their ideological nightmares. And in this situation, they employed a strident “country” language employed originally be English politicians, critical of “court” corruption, to translate imperial regulatory policy into a dangerous plot against provincial liberty and property.

The extraordinary bitterness and acrimony of colonial rhetoric requires us to consider the popular fear that the English were systematically regulating Americans to second-class standing within the empire. What we tend to forget, however, is that they also complained that their “British Brothers” had begun treating them like “negroes,” a charge that cannot be easily explained as an American echo of English political possession. Within the radically evolving imperial framework, the Stamp Act seemed and especially poignant for the Americans of their new second-class status.

According to Cunnings, “it was far from our intentions inclination to separate ourselves from Great-Britain; and that we had it not even in contemplation to set up for independency; but on the contrary, earnestly wished to remain connected with her, until she deprived s of all hopes of preventing such a connection, upon any better terms and unconditional submission.”

Interpretations of America
Gary B. Nash

The books thrust is to complicate the well-established core narrative putting for the reader bold figures, ideas, and movements, highlighting the true radicalism of the American Revolution that was indispensable to the origins of conduct, character, and outcome of the world-shaking event. This radicalism, therefore, was usually connected to a multifaceted campaign to democratize society, to recast the social system, to achieve dreams with deep biblical and historical roots, to put “power in the people,” as the first articles of government in Quaker New Jersey expressed it a century
before the American Revolution.

American Revolution Notes: Radical or Moderate. (2016, May 11). Retrieved from https://studymoose.com/american-revolution-notes-radical-or-moderate-essay 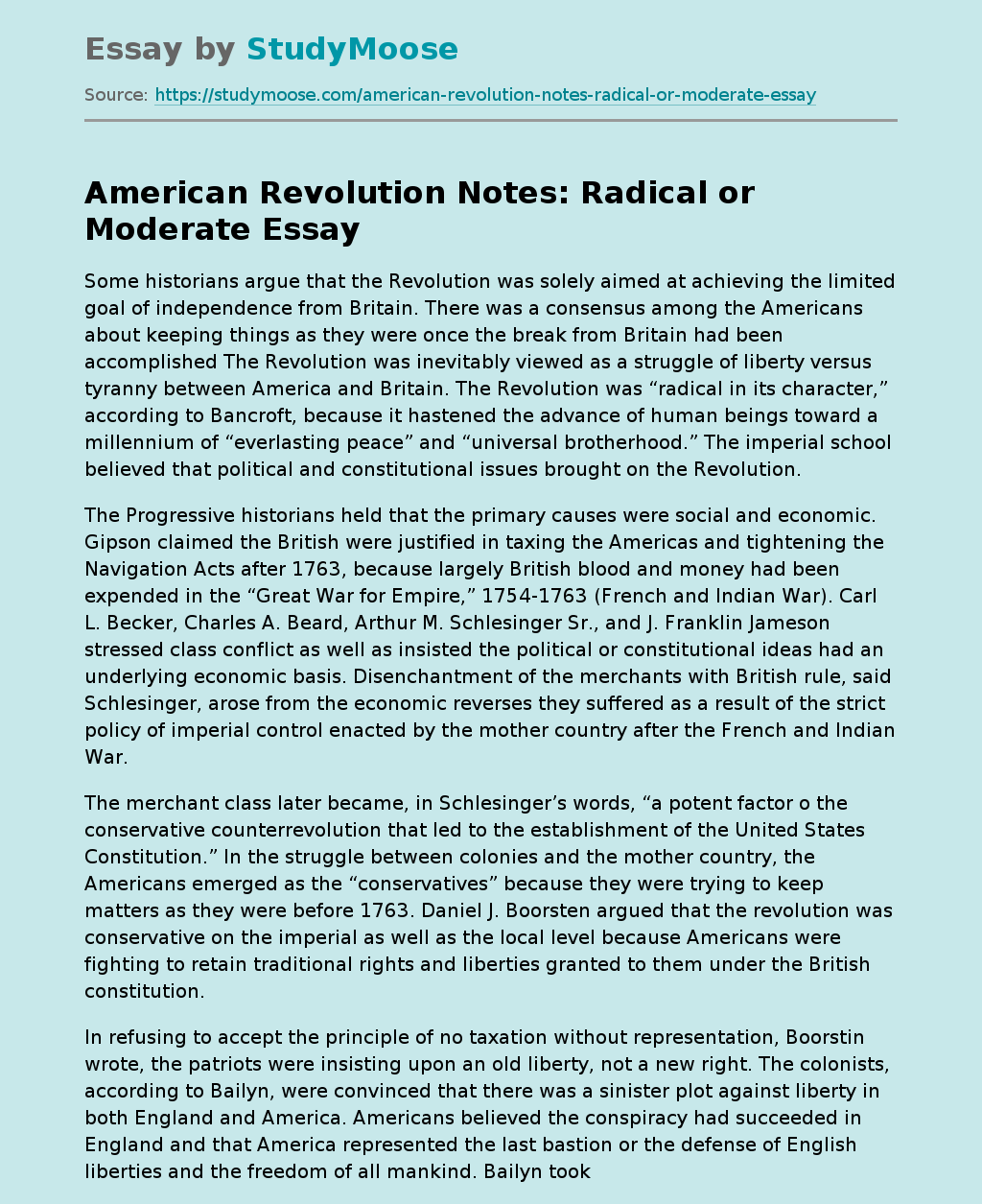