After the American Revolution, Americans, who had just broken free from the British, completely changed their politics, economy and society. The Founders decided to change how they wanted to run their society, even though, in the end, they went back to a more powerful federal government like Britain. Most people’s daily lives didn’t change much but the principles from the revolution made some try to look for better financial opportunities. Women, slaves, and loyalists were changed a lot in society.

Don't use plagiarized sources. Get your custom essay on
“ American Revolution ”
Get custom paper
NEW! smart matching with writer

Women had more freedoms, some of the slaves were set free, and many loyalists left America.

America did not go through much economic change, but it did experience social and political change. Since they had just fought a war to gain their freedom from them, Americans wanted their government not to be similar to Britain’s at all. This is why they implemented the Articles of Confederation that greatly limited federal power. But this government couldn’t raise taxes, or do a plethora of other tasks that were desperately needed, so the people realized their need for a more centralized government.

While the new Constitution was still being created and ratified, Alexander Hamilton, James Madison, and John Jay were writing the Federalist Papers in hopes of convincing states to support it. James Madison, in number 51 of the papers wrote “Ambition must be made to counteract ambition” (Doc I). He was referring to the idea of checks and balances that would be used to ensure that anyone in the federal government would not be able to have too much power, which the people were very wary of.

When it was finally ratified, the Constitution was similar to Britain’s government but also different because of their system of checks and balances. There was not much economic change in America after the revolution. The Philadelphia Society for the Promotion of Agriculture in 1786 gave out a medal, which said, “Venerate the plough” (Doc F). This exhibits how the elite were still trying to help the common people who weren’t financially better off than before the revolution, but it didn’t make much difference.

Similarly, in Shay’s Rebellion, Yeoman farmers in Massachusetts, according to Abigail Adams’ letter to Thomas Jefferson, “were crying out for a paper currency, some for an equal distribution of property” (Doc G). Shay’s Rebellion symbolizes the economic troubles that the poor had to deal with. The social change was the biggest change that happened in America. After the Revolution, the place of women, slaves, and loyalists in society was greatly altered. In order to teach justice and liberty to their children, women were educated in the ideals of Republican Motherhood.

In a woodcut of a patriot woman made in 1779, a woman is shown with a rifle and gunpowder horn (Doc A). Some women did play bigger roles in society by going with the fighting soldiers and sometimes even fighting with them in the revolution. However, not all women were satisfied to just go back to the earlier place in society they were at before the war as shown by Molly Wallace who said during her valedictory address in 1792, “if [taught] to read, why not to speak? ” (Doc J).

Many American women, like Wallace, sought after advancing their roles in society. But sadly, women suffrage didn’t happen for 140 years. For slaves in some regions, there was a lot of social change. In the years after the revolution, the slave owners in the North practiced manumission, and freed many slaves there. In the South, however, it would take many more years and a Civil War for the slaves to gain their freedom. There were more actions against slavery, though.

The Northwest Ordinance in 1787 stated, “There shall be neither slavery nor involuntary servitude in said territory” (Doc H), outlawing the spread of slavery in new states in hopes that eventually, states without slavery would exceed the states with it and be able to abolish it everywhere. The loyalists or “Tories” also went through significant change in society. Since they had favored Britain during the way, after it, they were became a widely hated. The Pennsylvania Packet says “Never let [the Tories] return to this happy land” (Doc B).

They went through so much change in society that countless loyalists left America, never to return. Politically, Americans underwent some change by creating a new government even though they still altered it in the end. Economically, there were still elites who ruled over the lower, poor class of people. And socially, a large amount of change occurred for women, slaves and loyalists, although the change in the place of loyalists was extremely negative. In these ways, American society was changed in respect to political and social life, but not economically. 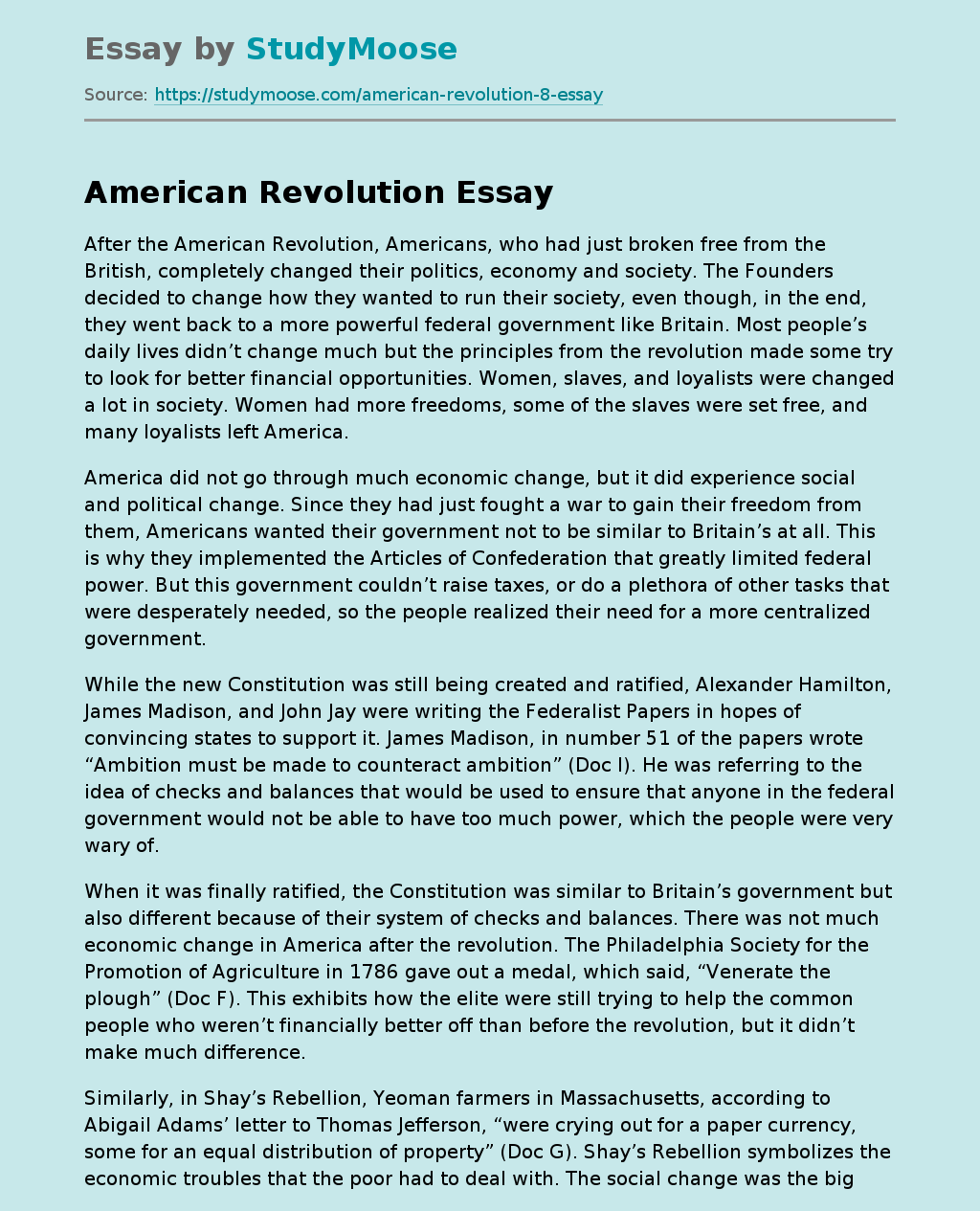