Advantages And Disadvantages Of Official Statistics In Sociological Research

Official statistics are quantitative data produced by local and national government bodies, and can cover a wide range of behaviour including births, deaths, marriages and divorce, income, crime, and work and leisure. Official statistics can be produced as a by-product of the normal workings of a government department, but they can also result from research designed specifically to produce them. Two main sources of official statistics are the government and its departments, and surveys. For example, government departments such as the Home Office and Education and Skills request; process and then publish information from organisations such as local tax offices, social services and hospitals.

Don't use plagiarized sources. Get your custom essay on
“ Advantages And Disadvantages Of Official Statistics In Sociological Research ”
Get custom paper
NEW! smart matching with writer

An example of a source of surveys that produce official statistics is The Office for National Statistics, which is a government agency and is responsible for compiling and analysing statistics. Every ten years this agency carries out the Census of the Population, which covers every household in the UK. By law each head of household must complete a questionnaire that includes family composition, housing occupation, transport and leisure.

The size of the sample also tends to increase the representivity of the statistics. They also tend to be well organised and planned when researched, so the standards of sociological research can be met.

Official statistics are usually readily available and relatively inexpensive, so sociologists can spend more time and money analysing data than collecting it. Statistics can also sometimes be the only source available for a specific topic, such as unemployment figures. Another advantage is that statistics allow sociologists to make comparisons over time, as they are usually produced regularly, for example the Population Census, which is carried out every ten years. This is similar to longitudinal studies, however the sample size of official statistical data is usually much larger.

Another disadvantage is that statistics do not always measure what they intend to measure. For example the Home Office Crime Rates Statistics do not take into account the fact that not all crime is reported. This can decrease the representivity of the data. Another factor which must be considered when interpreting official statistics is that because official statistics are usually produced by the government, they may be politically biased, for example to show that their policies are having the predicted effect. A well-known example of this is that the method of collecting unemployment statistics has changed many times, which gives the appearance that the unemployment rate it falling. From these disadvantages it would appear that although statistics can be very enlightening and useful, there are several pitfalls, which cannot always be avoided.

When assessing this view, it seems it cannot be applied to all types of official statistics, especially those concerning data on age and gender. Although there may well be considerable room for interpretation when considering whether, for example, a sudden death is suicide, there is less room for interpretation when deciding whether someone is male or female. Conflict theories such as marxist and feminist theory, argue that official statistics are neither hard facts or subjective meanings. Instead they believe they consist of information which is systematically distorted by the powerful institutions in society. Although the statistics are not complete distortions, they are manipulated through the definitions and procedures used to collect the data, so that they tend to favour the interests of the rich and powerful.

One example of this is the claim by Anne and Robin Oakley that official statistics are sexist. They have pointed out that in eighty-percent of cases a man is defined as the head of the household, and that women engaged in housework or unpaid domestic labour are defined as economically inactive, despite the contribution which housework makes to the economy.

Again, like questionnaires and social surveys, the data can be manipulated to support or reject a hypothesis; for example by the way the data is collected and categorised. Official statistics are generally not an in-depth profile of the sample being researched, unlike methods such as participant observation and longitudinal studies. However because these studies are more in-depth, they also tend to have a smaller sample size than statistical data. To conclude, it seems that although there are many benefits to using official statistics as a source of data, they must be treated with caution, bearing in mind the social processes involved in their collection. Although some see statistics as social constructions rather than social facts, official statistics do often provide a unique opportunity for sociologists to obtain data the whole population. This would otherwise be far too expensive and time-consuming for a sociologist to collect themselves.

Advantages And Disadvantages Of Official Statistics In Sociological Research. (2016, Apr 30). Retrieved from https://studymoose.com/advantages-and-disadvantages-of-official-statistics-in-sociological-research-essay 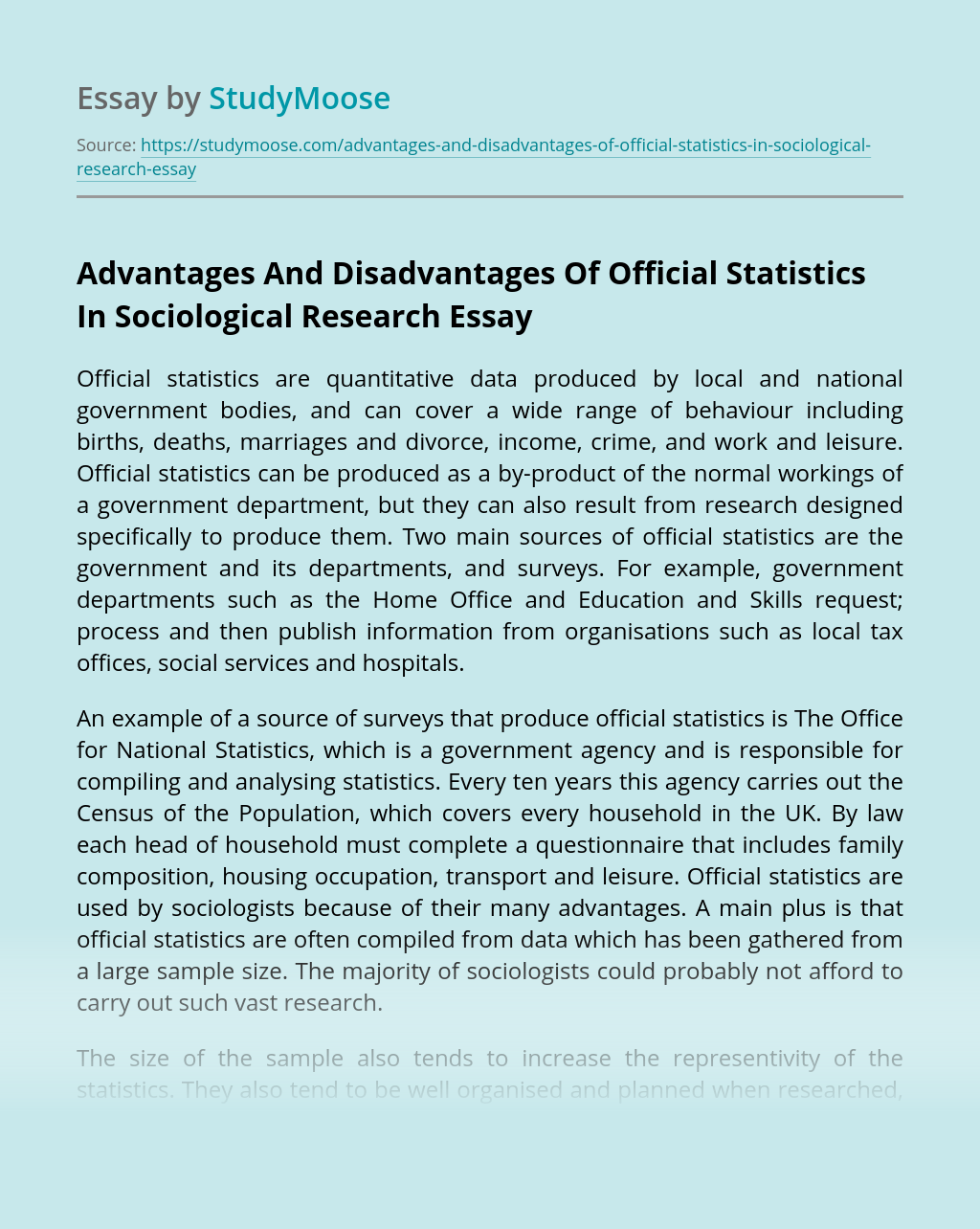