English Should be Declared the Official Language

In recent years, the America’s ability to resolve cultural diversity and political unity has been challenged at new level. The influx of immigrants from Asia, Africa and Latin America has brought changes in the character of many natives and accelerated demands for government services in their own languages. The aspect of linguistic diversity has in fact sparked insecurity about national unity and fostered a wave designed to make English the official language in the United States (Inhofe and Munoz ¶1).

Entrenched in the politics of language and especially making English the official language in United States is the deeper contest of American identity and means of preserving it.

Don’t waste time
Get a verified expert to help you with English Should be Declared the Official Language
Hire verified expert
$35.80 for a 2-page paper

Ensuring a common official language create and establish the foundations of national unity, on top of enhancing ethnic harmony. Policymakers and some American citizens have responded to this issue in various ways.

Court decisions, administrative regulations and federal laws have always favored the ultimate use of other languages in public offices, but most citizens have favored English language as a valued symbol of American nationhood worthy being established and defended for (Zehr 23).

Pros of English as Official United States’ Language Although lawmakers in the United States have lingered on deciding on endowing English with a special legal status, it was assumed that a common language would develop in America.

To affirm this hypothetical assumption, linguistic researchers consistently found out that the typical pattern of language usage among the immigrants to America shifted from non-English in the first generation of immigrants to use of the many languages in their surrounding neighbors in the second generation and the reverted to English in the third generation (Scholastic ¶1).

This was because speaking English was the only way to cope up for the new immigrants to adequately adapt to the society they found in America, increase their earning potential, for students to succeed in schools, and eventually enhance their future career options in the land of many opportunities. The immigrants and their descendants learned English not because the law forced them to due to the reason that learning English was a precursor to helping them get ahead in America.

The debate of making English the United States’ official language is founded on the believe that the stability of the American institutions and values heavily depended on cultural homogeneity. The America’s citizens and courts have sent clear message that people should unite behind a common official language and especially English which has been grasped by the majority and help foster American values that appreciate one another in that cultural diversity.

By helping the immigrants learn the official language would ensure that the services from government institutions are accessible to all and by extension would enable save taxpayers money initially used to cater for those services of an interpreter (Gillespie ¶ 1). Looking at the bigger picture, bilingual systems like in education require special services which prove to need a lot of money and more so create segregation on ethnic groups against the values endeavored to be achieved in the American dream (Inhofe and Munoz ¶1).

Let’s look at the issue in this perspective; suppose an employer wanted to train employees of different native languages what would he or she do? Having that common language is a major boost as everyone would endeavor to just be literate in it and break the barriers of language (Cincinnati ¶ 1). Training people in their native language narrows the perspective to ethnic level and would mean a lot of trainers-unnecessary expense of the company.

On the issue of language rights, which are mostly demanded by ethnic minorities, they are symbolic affirmation of their continued attachment to their original cultures. In the context of international arena, people have started thinking globally; the revival of ethnic consciousness does not anchor well with postering that international standards and more specific the concern of national unity (Inhofe and Munoz ¶1). Maintaining the ethnic lines brings about unrest and polarization as experienced in most parts of the world.

United States is the greatest nation on earth and ensuring preservation of English as the official language would be a great feat of achievement for it would ease out discrimination in offices which occur because people cannot be understood or are discriminated simply because they cannot speak a certain language. Inhofe and Munoz (¶ 1) point out a Zogby International Poll established that eighty-five percent of the sampled expressed their support for making English as the language that should be used in all government operations.

Surprisingly also, seventy-one percent of the Hispanics surveyed, were for the idea of making English as the official language in United States. This positivism has also been expressed in other polls and call for the implementation of bill that gives English the legal status as the official language and so there is no reason whatsoever to offer government services at extra costs in foreign languages. In cordial feat the Pledge of Allegiance and the National Anthem through English show the patriotism in bringing the nation together in the spirit of sharing the American Dream.

Cons of English as Official United States’ Language The demographic and political changes that began in America in the 1960s opened an era of clash over language. It was the blacks who emphasized the values of ethnic distinctiveness and solidarity in the use of their native languages and other groups followed. Alleviating English to the status of English has all along been perceived as a way of weakening the group’s ethnic heritage, where activists especially Hispanics have articulated that language rights are constitutional privileges that deserve to be observed in the law (Gillespie ¶ 1).

This in fact advocated that the United States government should move beyond toleration minority languages in the private arena to promoting bilingual languages in its institutions. This has always remained as the biggest threat to ensuring that English is made legally the official language in the United States. According to Inhofe and Munoz (¶1) another reason that has been a draw back in ensuring English is legal recognized as the official language in America is because there are other languages that are also spoken by a considerable number of people like the Spanish.

Spanish is said to be spoken by over forty million Hispanics in the United States at work, at homes and in their daily lives. Inhofe and Munoz (¶1) argue that by virtue of making English as the official language and relieving the government role of assisting non-English speakers and this could spell doom to those who cannot quickly learn English. It is agreed that people can learn English and money can be devoted to helping non-English speakers learn but the trick comes in passing a law that would magically expect people learn promptly may proof to be hard (Cincinnati ¶ 1).

Minority activists have all along supported cultural maintenance programs that teach children subjects in English and their native language in their education. The concept celebrates the multicultural conception of identity in America and in the process celebrates ethnic consciousness. The symbolic importance considerably undervalues the English language on the specter of accepting the bicultural approach, where the culture of a group is embedded in their language (Zehr 23).

Cincinnati (¶ 1) argues that the United States has never declared an official language because of the drawbacks that are faced in trying to do so and many people have tried without much success. In 1780, a congress man John Adams proposed to the congress for English to be made the official language, but he received much criticism where the proposal was deemed as threat to individual liberty and undemocratic. Over the years whenever the debate arose, there have been people on both sides (Scholastic ¶1). Only twenty-seven states have officially made English their official language others remaining in the dark.

Others people are opposed to the stand of making English official language simply because their business of translation would be affected as learning English for Spanish people they can understand and translate the manuscripts themselves (Cincinnati ¶ 1). Scholastic (¶1) points out that the estimates according to a U. S. English Inc. , a group that is a proponent of declaring English as the United States official language, there are close to 322 languages spoken by the citizens in the country. Twenty-four of these languages are spoken almost in every state.

Statistics has it that Wyoming has the fewest languages fifty-six in number while California State has the highest, two hundred and seven in total. Cincinnati (¶ 1) strongly argues that because the U. S is a nation of immigrants as rightly proved by the numbers, declaring English as the official language would be impeachment of the individual rights for those incapable of speaking English, who on the other hand pay taxes and should be served their languages notwithstanding. Gillespie ¶ (1) reminds us that when the question of language comes up many argue that it is aimed at dividing as it has remained a hot button to touch.

Many politicians argue that immigrants have been coming to America and have consequently contributed without holding back to the nation and eventually working to fulfill their dreams of better lives for their families and themselves. For this reason declaring English as an official language these immigrants would turn their backs on the American common dream. Conclusion The many reasons brought forth strongly propose that English should be made the official language of the United States. On the other hand, valid opposition on the issue also comes up, bearing weight which should be negated at policymakers’ peril.

English as the official language has many benefits to offer to the American citizens and the national unity at large. Homogeneity in language would cut down unnecessary costs encountered in the education and in judicial courts not forgetting polarization of the ethnic groups overtly felt and seen around the world. Moreover, it would be a plus in enhancing stability of the American institutions. The pros override the cons and supporting English as official language in the U. S would bring more benefits than the demerits expressed.

English Should be Declared the Official Language. (2016, Dec 25). Retrieved from http://studymoose.com/english-should-be-declared-the-official-language-essay 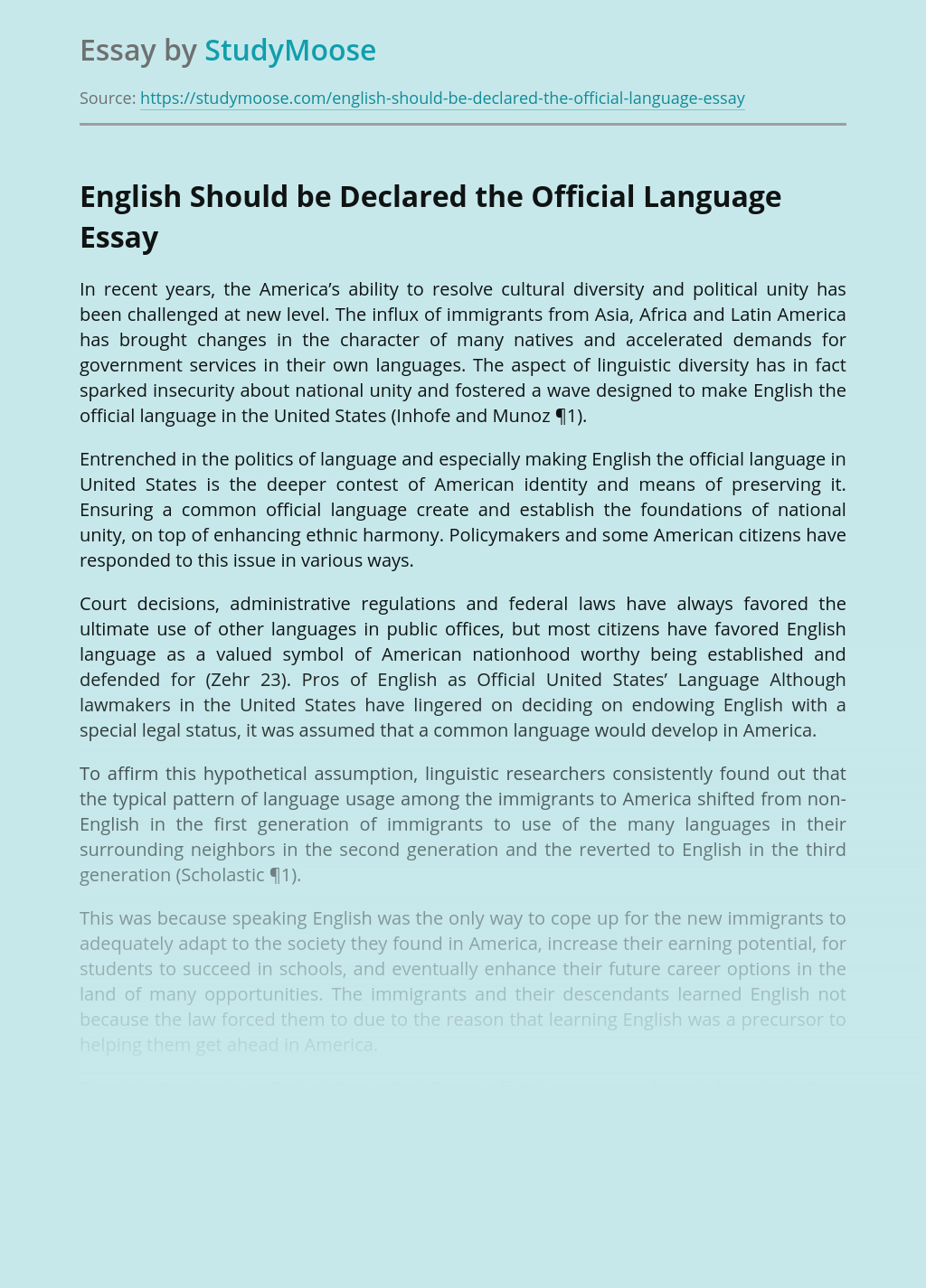 Don’t waste time
Get a verified expert to help you with English Should be Declared the Official Language
Hire verified expert
$35.80 for a 2-page paper
Stay Safe, Stay Original