Abstract We report a 39yearold Indian male who presented with

Abstract: We report a 39-year-old Indian male who presented with the onset of an acute febrile illness with fever, severe myalgia, and generalized fatigue. Dengue fever was confirmed with a positive IgM dengue. He was found to have an elevated creatine phosphokinase (CPK) of 290?U/L, leading to a diagnosis of dengue associated myalgia. He was aggressively hydrated and had close monitoring of his daily fluid intake, urine output, creatinine, and CPK levels. His hospital course was uneventful without the development of acute renal failure.

Don't use plagiarized sources. Get your custom essay on
“ Abstract We report a 39yearold Indian male who presented with ”
Get custom paper
NEW! smart matching with writer

This case highlights that severe myalgia may occur in patients with dengue fever and that early and aggressive treatment may prevent severe complications such as rhabdomyolysis, acute renal failure and death.

Characteristic laboratory findings including leucopenia and thrombocytopenia along with specific antigen detection help in the early diagnosis, appropriate management and prevention of complications. We report a case of dengue fever with neuromuscular complication.

Case Report: A 39-year-old male presented with symptoms of high-grade fever and generalized myalgia of 7 days duration. He also had an associated loss of appetite. There was no history of rashes over his body. He did not have any past co-morbidity.

At the time of presentation, there was no history of mucosal bleeding, skin hemorrhages, or hematochezia. There was no history of retro-orbital pain, neck stiffness, or photophobia. There were no urinary symptoms and no history of nausea or vomiting. Clinical examination revealed a temperature of 101°F, pulse rate of 82/min, blood pressure 110/80 mm Hg and respiratory rate of 24/min. He was hemodynamically stable with saturation (SPO2) of 98% in room air. The patient was anicteric. Rest of the general examination was unremarkable; there was no eschar. On systemic examination, the cardiovascular system had normal heart sounds and no murmur; examination of the chest revealed bilaterally equal air entry without any crepitations or rhonchi; abdominal examination revealed a mild hepatomegaly. He was conscious and oriented without any focal neurological deficits. There was no evidence of any petechiae, purpura, ecchymoses, or rash over the skin. Fundoscopy was negative for retinal hemorrhages. Investigations revealed a mild leucopenia and thrombocytopenia. His initial urea, creatinine, electrolytes, and coagulation studies were normal and remained normal during his admission. Creatinine level was 0.8mg/dl on admission and 0.9mg/dl at discharge. Admission aspartate transaminase was 80?U/L (normal 7-32?U/L), ?-glutamyl transferase was 60?U/L (normal 10-70?U/L), and lactate dehydrogenase was 240?U/L (normal 105-200?U/L). These values declined steadily during the admission and eventually normalized by the time of discharge. His initial creatine phosphokinase (CPK) was 290?U/L (normal for a male 22-198?U/L). With early and aggressive treatment, this value decreased by about 30-50% every day until it was 72?U/L at the time of discharge. Urine microscopy was negative for red blood cells, casts, or other abnormal urinary sediments and urinary myoglobin. Tests for HIV, hepatitis B and C, and leptospirosis were all negative. Dengue IgM became positive on day eight from the onset of fever. This was his first infection with dengue. We could not detect the serotype of the dengue.

The patient was given aggressive hydration with intravenous and oral fluids. Input/output charting was done focusing on daily fluid intake and urine output to monitor pH. Urea, creatinine, electrolytes, CPK, and platelet count were closely investigated. The patient’s hospital course went uneventful and he was discharged as his myalgia subsided and serum CK levels returned back to normal.

Discussion: Neuromuscular complications of dengue fever are frequent, especially when the spectrum spreads to the hemorrhagic fever or shock syndrome2; 3. Muscular signs of dengue fever are more debilitating since it extends after the febrile period. Commonest muscular presentations of dengue fever include myalgia, myositis, rhabdomyolysis and hypokalemic paralysis. When a dengue patient presents with muscle pain, tenderness or muscle swelling with associated difficulty in walking, always rule out dengue associated myalgia, since it has been reported in up to 93% of dengue patients4. Diffuse viral invasion into the muscle with subsequent inflammatory changes leads to this myalgia, especially if infected with dengue virus 15. Derangement in EMG or CPK is seen only in minority of cases. These transient self-limiting myalgias don’t need any specific treatment in general, but few cases may need analgesics like paracetamol. When a dengue patient presents with pure motor weakness of four limbs, normal power, normal DTR with markedly elevated CPK and mild myopathic changes in EMG, myositis (inflammation of skeletal muscles) secondary to dengue infection must be suspected. Muscle edema, hemorrhage, metabolic alterations and changes in vascular endothelial cells are responsible for the muscle dysfunction in dengue myositis. It may resolve itself in most cases, but severe myositis leads to quadriplegia and respiratory insufficiency. Another infrequent muscular complication of dengue is acute, pure, severe motor paralysis of all the four limbs with rapid falling blood potassium level. Usually weakness starts 2nd to 5th day of fever over a period of 24 hours. DTR will be absent or diminished and potassium will be low (mean-2.23) along with elevated CPK. Quick recovery with potassium infusion is the characteristic feature. Hypokalemia induced vasoconstriction and the subsequent muscle ischemia leads to these changes6. The close differentials to dengue associated hypokalemic paralysis include Guillain Barre Syndrome and first episode of hypokalemic periodic paralysis. The most severe form of muscle involvement in dengue fever is rhabdomyolysis, characterized by myalgia, elevated CPK (10 times normal) and myoglobinuria7, 8. Dengue infection induced cytokines are the culprits, which causes damage of muscle cells. Rhabdomyolysis leads to acute renal failure and life threatening electrolyte abnormalities. Hydration as a part of dengue treatment itself helps in the recovery of rhabdomyolysis.

Abstract We report a 39yearold Indian male who presented with. (2019, Nov 17). Retrieved from https://studymoose.com/abstract-we-report-a-39yearold-indian-male-who-presented-with-example-essay 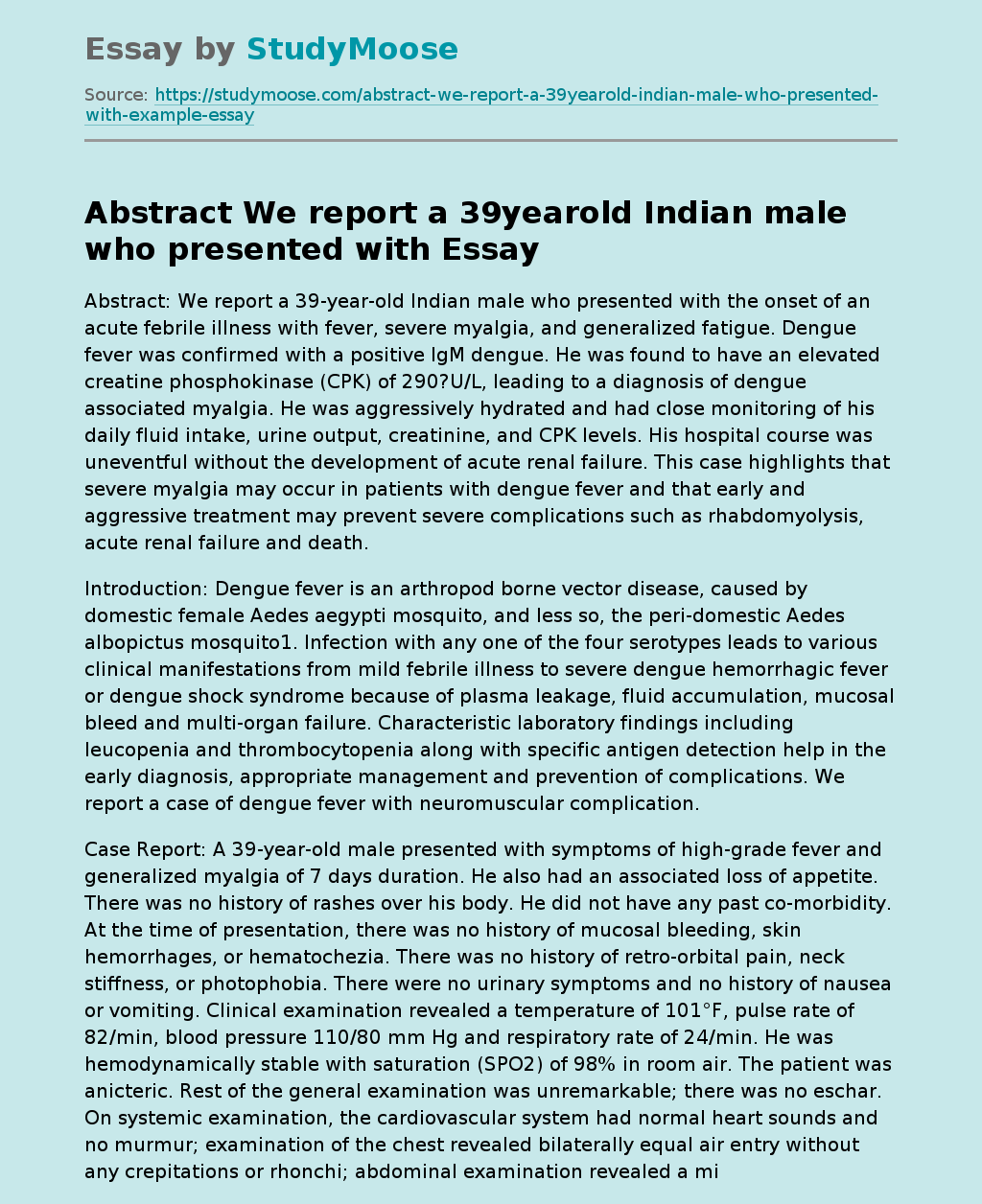