Expressionism is when an artist expresses an inclination towards the distortion of reality for emotional effect. While all art is expressionist to a certain extent, the distortion is of such a scale as to be further removed from the representation of objective reality than other styles. The objective of such a style is to emphasize the plasticity of form or to bring about a psychological disturbance as a response to perception of said art by means of rejecting verisimilitude.

(Britannica, 2008) One of the best and most well-recognized examples of Expressionism is Edvard Munch’s The Scream, which depicts a lone figure frozen in a psyche-shattering pose of anxiety, said to be paralyzed by existential angst.

Don't use plagiarized sources.
Get Your Custom Essay on Differences between abstract art and expressionism Just from $13,9/Page

Expressionism should not be confused with Abstract art, which foregoes representation in favor of the use color and form in non-representational ways.

Well-recognized examples of abstract art are the works of Jackson Pollock, which include No. 5, 1948, which exemplifies his drip and drizzle technique. (Compton, 1978) Abstract and expressionist art are similar in so far as they opt out of objective representation, but the former rejects it completely.

As such, it is characterized by visible brush strokes, attention to light emphasis, mundane subject matter, and detail to movement, as well as unusual angles. All these characteristics draw self-conscious attention towards the elements of human visual perception. (Denvir, 1990) Impressionism is best exemplified by the works of Claude Monet, and the movement of style derives its name from his painting Impression, soleil levant. Please define the term, iconography, and discuss its importance in art. Please refer to specific artworks.

Iconography is a branch of art studies which focuses on the identification of image content and its interpretation, and extends itself to the general understanding of how certain subjects are used within the breadth of art. Iconography is most notable within religious art, which relies on imagery crucial to the circumscribed beliefs. For example, in Buddhist art , varied imagery is used in order to represent the nigh infinite aspects of Buddha. Why would an artist prefer to use oils rather than tempera paints? What effects would the artist be able to achieve by choosing oils?

Artists may favor the use of oil-based paints over tempera for the simple reason that it is much more difficult to blend colors in tempera paints than it is to do so with oil. Thus, it is far easier to create a broad range of hues that facilitate a broader chromatic expression. Also, oil-based paints take a longer time to dry than tempera, which means that it is somewhat easier to undo mistakes by blending colors into the still wet paint, or remove it. Tempera paints on the other hand, are much more difficult to blend, and dry far faster.

Unless one’s work is meticulously planned, oil-based paints are far more preferable. What is the difference between Classicism and Romanticism in the history of Western art? Please give an example of each. Classicism was a trend within post-medieval European art in which artists were expected to emulate the aesthetics of classical antiquity. This was reflected in the works of Michelangelo whose sculptures such as the Pieta and David, were evocative of the aesthetic ideals of human figure representation during the eras of classical antiquity.

Leonardo Da Vinci, renowned for works such as The Last Supper and Mona Lisa, subscribes to a similar body aesthetic ideal. Please explore arts conflicting roles of revealing truth and concealing it. Reference specific artworks in your discussion. Critics and scholars of art are primarily preoccupied with its relationship to truth. For example, John Ruskin, a British aesthetic theorist argued that art’s role in culture was to communicate essential truths to be found in nature, by means of using artifice. (Ruskin, 1843)

Ruskin was not the first, nor would he be the last, to place value upon art by means of its relationship to truth. Novelist Leo Tolstoy argued that art is an indirect form of communication, albeit by unconventional means. Benedetto Croce and R. G. Collingwood advanced the notion that art is a means of expressing emotional truths. (Levinson, 2003) In effect, art’s relationship to truth is such that it functions as a medium for it, while attempting to circumvent many of the awkward traits which come from direct expression, thereby using concealment of truth – artifice – as a means of revealing truth.

Consider for example, the Venus of Willendorf, a limestone carving found by an archaeologist in lower Austria. A rotund ‘idealization’ of the female figure which exaggerates the dimensions of the vulva, belly and breasts, it appears to be so far removed from the aesthetic idealization of the female form. However McDermott (1996) argues that the Venus may have been a self-portrait, and the observation by others that the head is looking down, and when thought of as the self-image of a woman confronted with her own pregnant proportions, are actually realistically and accurately defined.

Thus, the actual distortion of the female form is used to confront the internal truth which pregnant women face, and exemplifies the use of artifice in communicating said truth. REFERENCES Expressionism. (2008) In Encyclop? dia Britannica. Retrieved June 24, 2008, from Encyclop? dia Britannica Online: http://www. britannica. com/eb/article-9033453 Compton, S. (1978) The World Backwards: Russian Futurist Books 1912-16. The British Library. Denvir, B. (1990). The Thames and Hudson Encyclopaedia of Impressionism.

Differences between abstract art and expressionism. (2016, Aug 23). Retrieved from https://studymoose.com/differences-between-abstract-art-and-expressionism-essay 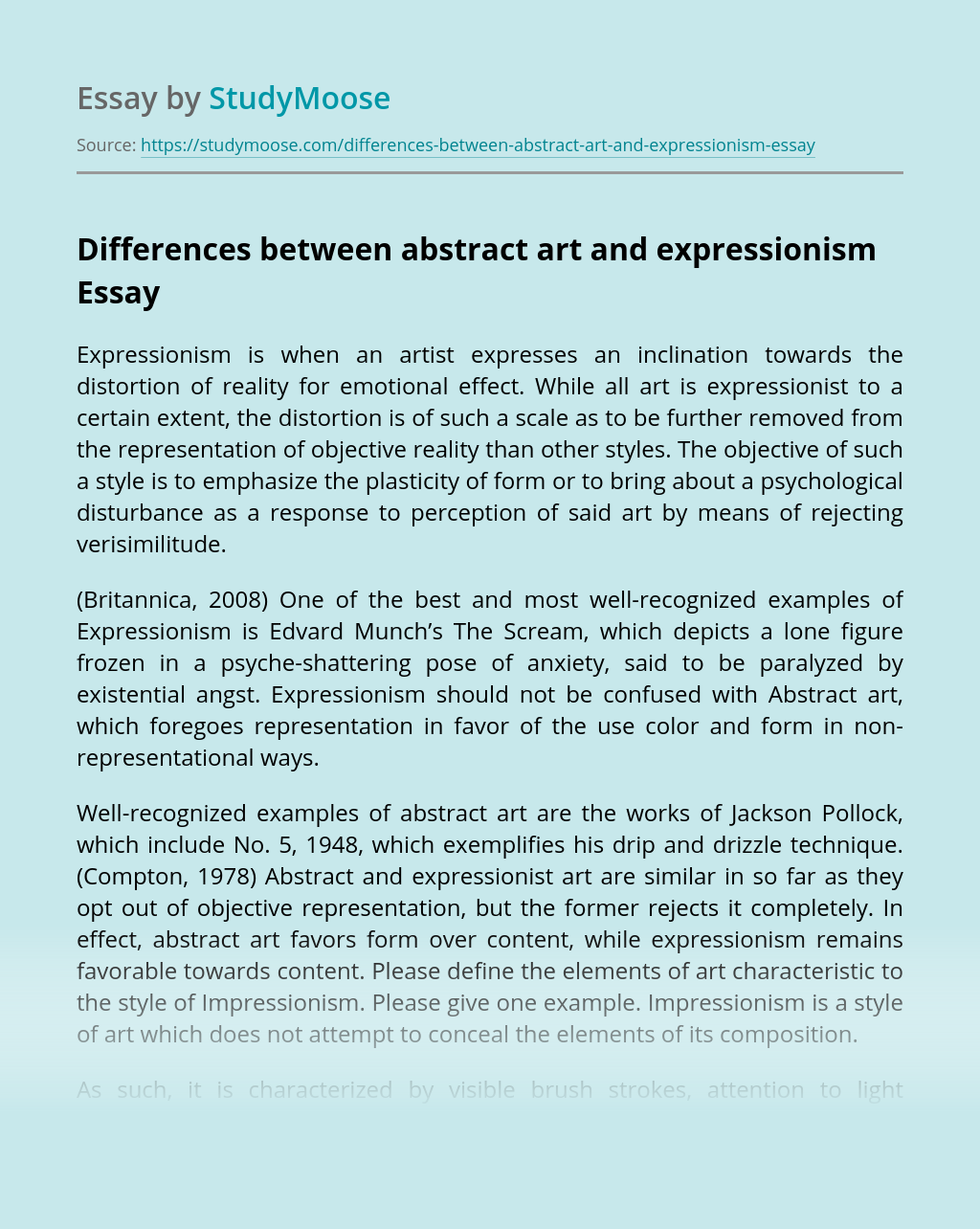 At the end of World War I, many new democracies were established in Europe. In the years between the two world wars, what happened to most of these democracies? They were replaced by dictatorships. Why did Adolf Hitler oppose the Treaty of Versailles? He took issue with the punishment and reparations imposed on the German... VIEW ESSAY

Groupthink phenomenon continues to exist and influence in a group decision making. This is especially happen when group cohesiveness is high and there is an absence of open communication. However, understanding the theory would enable us to recognize the factors that may affect the quality of decisions we made in the group. Risky-shift on the... VIEW ESSAY

View sample
Get Essay
Pros and cons of zoos

The Con’s Personally I detest zoos only because I love nature and love to see animals in their natural habitat. It saddens me to see monkeys, seals, bears, etc., caged in or dolphins in what looks like fair-sized pools of water, but, when you consider the vast ocean that they belong to, the pool is... VIEW ESSAY

In consumer lending, every product is evolving in the same direction as credit cards-toward large, national-scale consolidators replacing local, face-to-face lending. That evolution has happened in credit cards. It’s well under way in auto finance, mortgages, and home equity. Its coming more slowly in installment lending. So consumer lending, a major part of the asset... VIEW ESSAY

Another pressing issue in the topic of animal rights is the controversy of testing on animals. Throughout history, animals have often been used to test medical research and theories. In early Greek culture, physicians and scientists, such as Aristotle, and Erasistratus, performed experiments on living animals (Hajar, 2011). There have been debates on the topic... VIEW ESSAY