Lord of the Flies Brings Abstract Idea Through Its Symbol Essay

God loads people with humanity and savagery. It depends on how people manage it in everyday life. It also shows in Golding’s novel Lord of the Flies. This story concerns to how people run the instinct to live such rules, peacefully, moral and value. The story begins when a group of English schoolboys isolated on an island after their plane has crashed during a war. They are Ralph, Piggy, Jack, Simon, Roger, Sam and Eric. They tried to survive until they could find by others.

Don't use plagiarized sources.
Get Your Custom Essay on Lord of the Flies Brings Abstract Idea Through Its Symbol Just from $13,9/Page

The conflict among them showed their personal characters; Ralph was chose as protagonist character, he was elected as a leader of the group and tried to handle his friends to build a miniature civilization on the island until they could be saved. In this story, Golding represented Ralph as person who had humanity instinct. Jack was antagonist character because through the story he showed barbarian instinct which is wild, savage, and brutish. Simon was represented as a good boy who had the willingness to work in the group.

Piggy was symbolized as intellectual boy, Golding showed it in his appearance which is he wore an eyeglasses. Roger was like Jack, cruel boy who brutalized others. And the last, Sam and Eric, they are a pair of twins who had a lot of innocence. In the whole story, the reader can easily find that the narrative is built by so many symbols or we can say it allegory novel which is a story in which characters, setting and actions stand for something beyond themselves, such as abstract ideas, moral qualities and historical figures or events, in this case, story can be read in level of symbolic.

Lord of the Flies was written in 1954, it seems that Golding had experienced to World War II when humanity and crime existed on it. It is possible that Golding tries to portray the conflict between evil and civilization on the story of Lord of Flies. The ideas of civilization and savagery appear in both characters Jack and Ralph. In the beginning of the novel, Ralph and Piggy found a conch shell, they decided to use that conch shell to gather the others after the crashed.

The shell is being a symbol of civilization, which successfully head the group’s meetings, and for point who is the right to speak by holding its shell. It is safe to assume that the shell is symbol of democratic and to unite each other. But however when the shell loose its power and the boys came to savagery, it influenced among them. Many people who usually live or travel in the jungle believes that focusing the glasses on the sunlight may get a fire. It looks when the boys tried to make a fire by using the lenses from Piggy’s glasses.

Golding looks as if he wants to picture Piggy as an intellectual boy among the other boys and the glasses as a symbol of it. Glasses is symbolized the power of science and intellectual attempt in society. Making the signal fire may help so that others can rescue them. Ralph had an idea to climb the mountain and made a smoke therefore if a ship came near the island, they could notice them. The signal fire can be one of symbol to connect to civilization. They want to be rescued and go back to society by making a sign.

But when the fire goes low burned or even out, it may assume their desire to be rescued by other is helpless. In the end of the story, the signal fire isn’t a notice to a ship but a fire in the mountain forest as a part of Jack’s savagery to hunt Ralph. The fear of something imaginary leads them to savagely behavior. For the first time, the boys didn’t believe there was a beast on the island, but later on it frightened all of them because the existence of the beast was in their mind. When the boys are wilder the existence of the beast are more real. They consider it as a totemic god and surrender for it.

The boy’s behavior brings the beast into existence so it seems like beast become real in soul of them. Golding may portray the beast as a symbol of savagery because the reader may consider it as a monster or evil that against with humanity. In a way, reading this novel is like seeing an adventure to find the existence of personal identity. Golding succeeds in portraying a conflict between humanity and savagery through his novel Lord of the Flies. Showing that God creates people with two sides; civilization and sin. It is a matter how people handle with it and discover the wisdom to know the difference.

Lord of the Flies Brings Abstract Idea Through Its Symbol. (2017, Feb 17). Retrieved from https://studymoose.com/lord-of-the-flies-brings-abstract-idea-through-its-symbol-essay 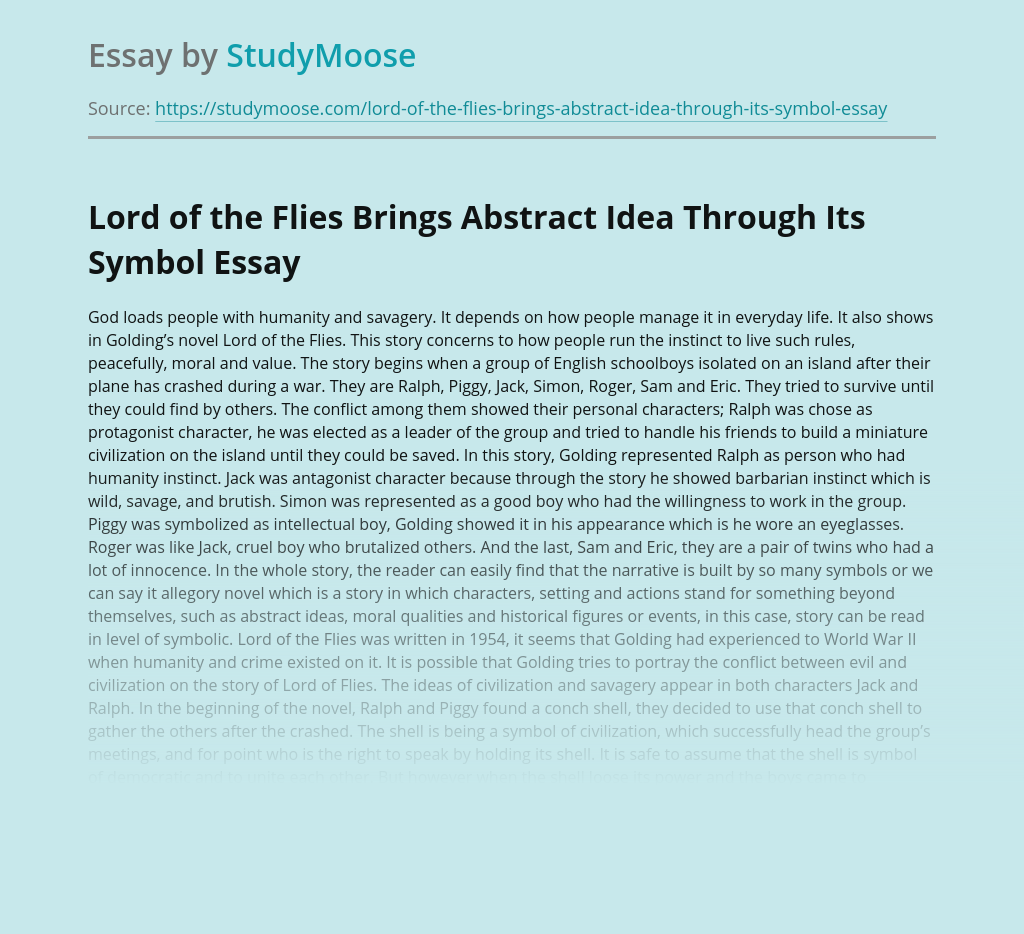 Cold Mountain is a tragic yet a very profound story of love, searching, and intuition which happens in an environment terrorized by war in 1864 (Buchanan). The story is set on the troubled plains and mountains of nineteenth century America where Inman, the main character, decided to leave the battlefield as he yearned and searched... VIEW ESSAY

1. Title: ALL QUIET ON THE WESTERN FRONT 2. Author: ERICH MARIA REMARQUE 3. Published: 1929 4. SUBJECT: This book is written by a German veteran of World War I, who describes the German soldiers’ extreme physical and mental stress during the war, and the detachment from civilian life felt by many of these soldiers... VIEW ESSAY

‘A Christmas Carol’ is a novella written by Charles Dickens which illustrates a somewhat happy Christmas story that highlights the importance of being a kind hearted person. Throughout his novella, Dickens’s shows the reader his intended moral of the story, that Scrooge’s transformation at the end of the novella is what Dickens’s hopes that our... VIEW ESSAY

In the history of the American civil rights movement, two seminal figures emerge: that of the peaceful and nonviolent Martin Luther King, Jr., and the revolutionary and radical Malcolm X. From these two contrasting images, America did not know how exactly to classify the movement. On one hand, Malcolm X preached independence and a “by... VIEW ESSAY

In what city does the play take place? Verona, Italy Why are Romeo and Juliet called “star-cross’d lovers”? They are thwarted by fate through influence of the stars Who is fighting at the beginning of the first scene? The Montague and Capulet servingmen Who tries to break up the fighting? Benvolio What threat does the... VIEW ESSAY