ABSTRACT This paper discusses different types of silk and the life cycle of silkworm. It also shows how silk is associated with ancient Chinese culture in terms of clothing, writing on silk and Silk Road. Silk became a luxury item and a symbol of wealth and beauty. The Silk Roads were used not only to transport silk but also a number of other items the impacts of the Silk Roads were positive for the cultures that relied on it. Keywords: Silk, Silkworm, Culture, Silk Road.

Don't use plagiarized sources. Get your custom essay on
“ ABSTRACT This paper discusses different types of silk and the life cycle ”
Get custom paper
NEW! smart matching with writer

INTRODUCTIONSilk is a natural fiber and was amongst the earliest fibers discovered by man. Silk is a fibroin made of proteins secreted in the fluid state as single filament by a caterpillar, popularly known as ‘silkworm’. These silkworms feed on the selected food plants and spin cocoons as a ‘protective shell’ to perpetuate the life. Silkworm has four stages in its life cycle which include egg, silkworm, pupa and moth. Man interferes this life cycle at the cocoon stage to obtain the silk, a continuous filament of commercial importance, used in weaving of the dream fabric.

THE LIFE CYCLE OF SILKWORMThe life cycle of silkworms depends on the weather the higher the temperature the lower the life cycle of silkworms. the female moth lays eggs and after some days each egg becomes a silkworm larva that eats mulberry leaves and grows bigger the larva spins a cocoon of silk threads around itself inside the cocoon the larva changes into a pupa and the pupa changes into a moth, the moth comes out of the cocoon the adult mate with each other and the life circle begins again.

TYPES OF SILKMulberry silk: This popular kind is produced by the bombyx mori silkworms which are fed from the mulberry plant thus its name, the silk threads produced by this moth is white or yellowish in colour. Mulberry silk is the most important and contributes as much as 90 percent of world productionNon- Mulberry silk: this include other types of silks that are solely not fed on the mulberry plants, the most known commercially non mulberry silk include Tasar silk produced by the worm called tasar silk in which the silk threads are brown coloured It is mostly found in India, China and Srilanka, Eric silk this type of silk mainly feeds on castor plants to produce a white or brick-red silk popularly known as Eri silk, Muga silk this type of silk produces golden-yellow silk thread which is very attractive and strong.SILK IN ANCIENT CHINESE CULTURESilk is one of the most important inventions of ancient China, and has contributed greatly to its wealth and prosperity.Silk Road It was named the Silk Road’ in 19th century by Ferdinand von Richthofen a German geographer. It was called the Silk Road because one of the major products traded was silk cloth from china, it started from China and passed through Central Asia, West Asia, Africa and Europe.The network was used regularly from 130 BCE, when the Han officially opened trade with the west, to 1453 CE, when the Ottoman Empire boycotted trade with the west and closed the routes. The Silk Road was important in Chinese culture because Economically, it helped china in trading with other countries which gave china a market to sell its goods and it made money off of trade, Culturally, it introduced more cultures and ways to celebrate and communicate to what they called their God, and also during a rough time for China Buddhism was introduced, which helped the Chinese relieve their stress of what may have happened recently and Socially, more languages were introduced to people near the Silk Road..Silk Clothing China is the first country that discovered silk making, it is said the silkworm for making silk cloth was first invented by the wife of the yellow Emperor, Lei Zu around the year 2696 BC. The idea of silk came from the queen named Leizu around the year 2696 BC who was having her tea under the mulberry tree, when a cocoon suddenly fell into her hot tea from the mulberry tree and unraveled forming silk threads around itself that when she discovered that the cocoon was made of long threads that were both soft and strong Leizu then discovered how to combine the silk fibers into a thread and hence the discovery of silk. Silk was used to make clothing which was valuable in ancient Chinese culture, the rich and the poor dressed quite differently, the people of higher status wore clothes made of silk and the people of lower class were not allowed to wear silk, spread gradually through Chinese culture and then to many countries around the world.Silk as Writing MaterialSilk was considered in ancient China as writing material, from sometime in the Warring States Period (475-221 B.C.) Silk was much lighter and could be cut in desired shapes and sizes and be folded easily, the better to be kept and carried than other previous writing materials such as wood slips and bamboo though it was very expensive. During the Tang Dynasty (618-907), it was the fashion to weave the lines into plain white silk to be used exclusively for writings which were mainly for education purposes and handing down knowledge to the future generations. REFERENCES1. En.wikipedia.org. (n.d.). Silk. [online] Available at: China Highlights. (n.d.). Chinese Silk ” Silk History, Production, and Products. [online] Available at: Ducksters.com. (n.d.). Kids History: The Legend of Silk in Ancient China. [online] Available at: Byjus.com. (n.d.). Silkworm – The Life Cycle of Silkworm | Processing of Silk. [online] Available at: Cartwright, M. (n.d.). Silk in Antiquity. [online] Ancient History Encyclopedia. Available at: Talbot, L. (2005). Chinese Silk: A Cultural History. Shelagh Vainker. Studies in the Decorative Arts, 12(2), pp.143-147.7. Bhatia, P. (2005). The Silk Roads, Highways of Culture and Commerce. Indian Historical Review, 32(2), pp.241-244

ABSTRACT This paper discusses different types of silk and the life cycle. (2019, Aug 20). Retrieved from http://studymoose.com/abstract-this-paper-discusses-different-types-of-silk-and-the-life-cycle-essay 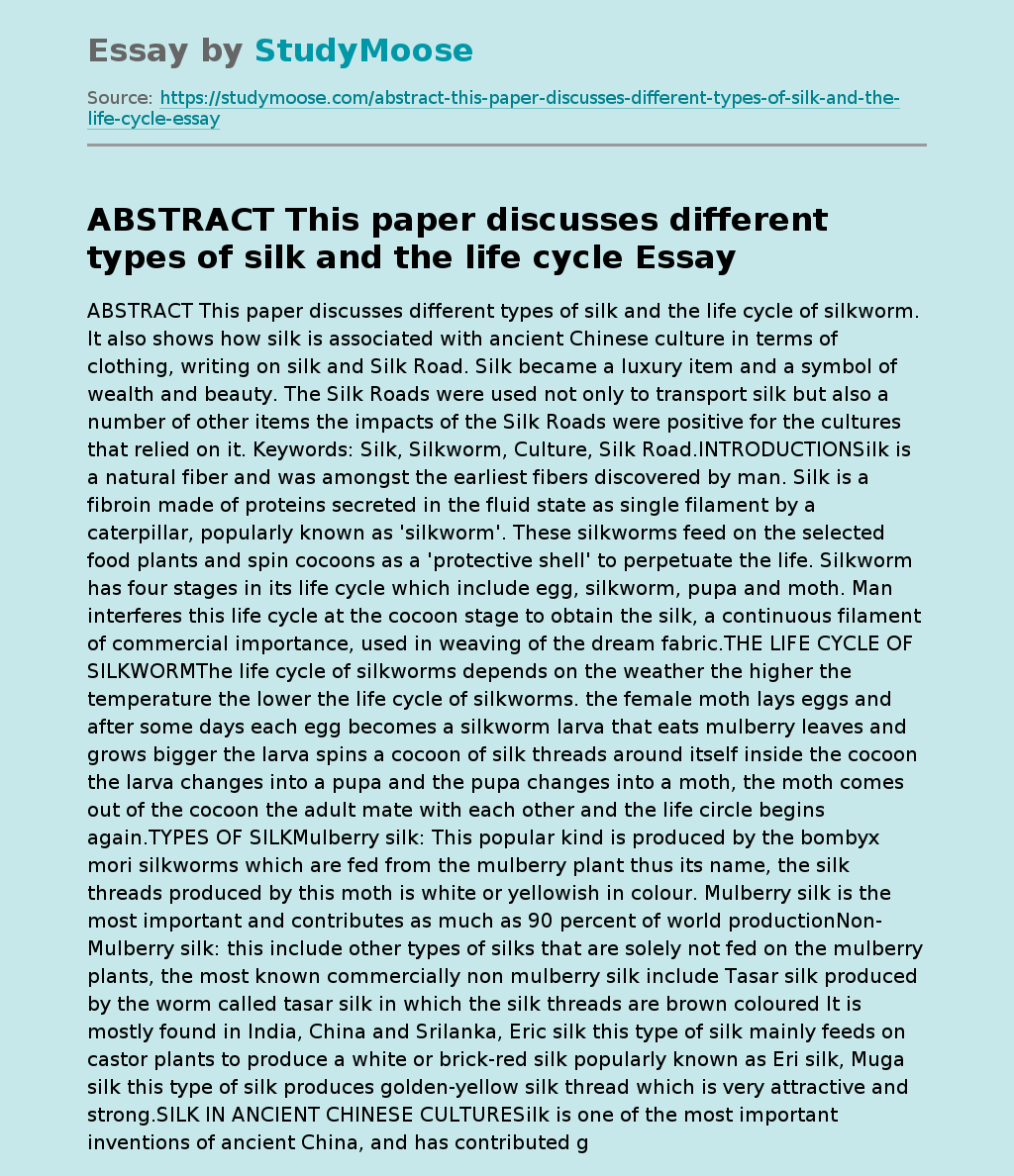