Both the Trans-Saharan and Silk Road relied heavily on the use of caravans, merchants, and domesticated animals as a primary source of conducting trades and commerce along such long paths.

Don't use plagiarized sources.
Get Your Custom Essay on Compare and contrast Trade routes Just from $13,9/Page

In Africa, the domestication of camels proved to be a monumental invention to boost the flow of trade and commerce.

With camels, merchants could travel across the Sahara much faster and more effectively with fewer resources. The people living on the trade route through the Sahara were able to make a living off of herding and selling domesticated camels in large quantities to merchants and create caravans to aid in the crossing of the Sahara.

In Asia and the Middle East, the Silk Road was almost primarily dependent on the movement of merchants on caravans, just like in the Sahara.

Horses acted as the most effective form of transportation and by the time 600 C.E. rolled around, better innovations for controlling domesticated horses arose. The most predominate of these inventions was the stirrup which is the loop at the bottom of a saddle which gave a rider more stability while riding at a high speed or at great distances. The stirrup and domesticated camels were so influential at the time of discovery that even to this day, both are still present in the areas where the Silk Road and Trans-Saharan trade routes were located.

The cultural diffusion that resulted from trade on the Trans-Saharan and Silk Road trade routes differed because of the ethnic backgrounds of the merchants and civilizations participating in each respective trade route. Along the Trans-Saharan trade route, tribes such as the Berbers, Nubians, Egyptians, and Tuareg participated as well as interactions with Roman colonists.

Many roman goods were incorporated into this route and, along with the agricultural trade within the different tribes, these aspects mixed together to result in the trade of culture between all these comingled tribes. The mixing of these cultures formed a new society in the middle of the Trans-Saharan that still exist today, the herders. The new societies along the Trans-Saharan trade route specialized in the herding of cattle and camel, and evidence shows that this new culture worshiped cattle as a result of all the necessities cattle provide.

The spread and diffusion that lead to herding in Africa is not prevalent in Asia and the Middle East where the Silk Road was. Instead, the spread of religion, especially Buddhism and Christianity, defined the cultural change brought about by the Silk Road. Missionaries and monks from India brought the teachings of Buddhism to most of East Asia through the Silk Road. As the monks traveled, the different areas they reached obtained and adapted the story of Buddha into local cultures.

Christian Missionaries from the fallen Rome Empire were forced to spread out across the Middle East through the western portion of the Silk Road. Thanks to trade between Rome and the Middle East, the missionaries were able to spread religious teaching to the Middle East and promote the new religion as well as provide a place for it to grow.

Compare and contrast Trade routes. (2016, May 23). Retrieved from https://studymoose.com/compare-and-contrast-trade-routes-essay 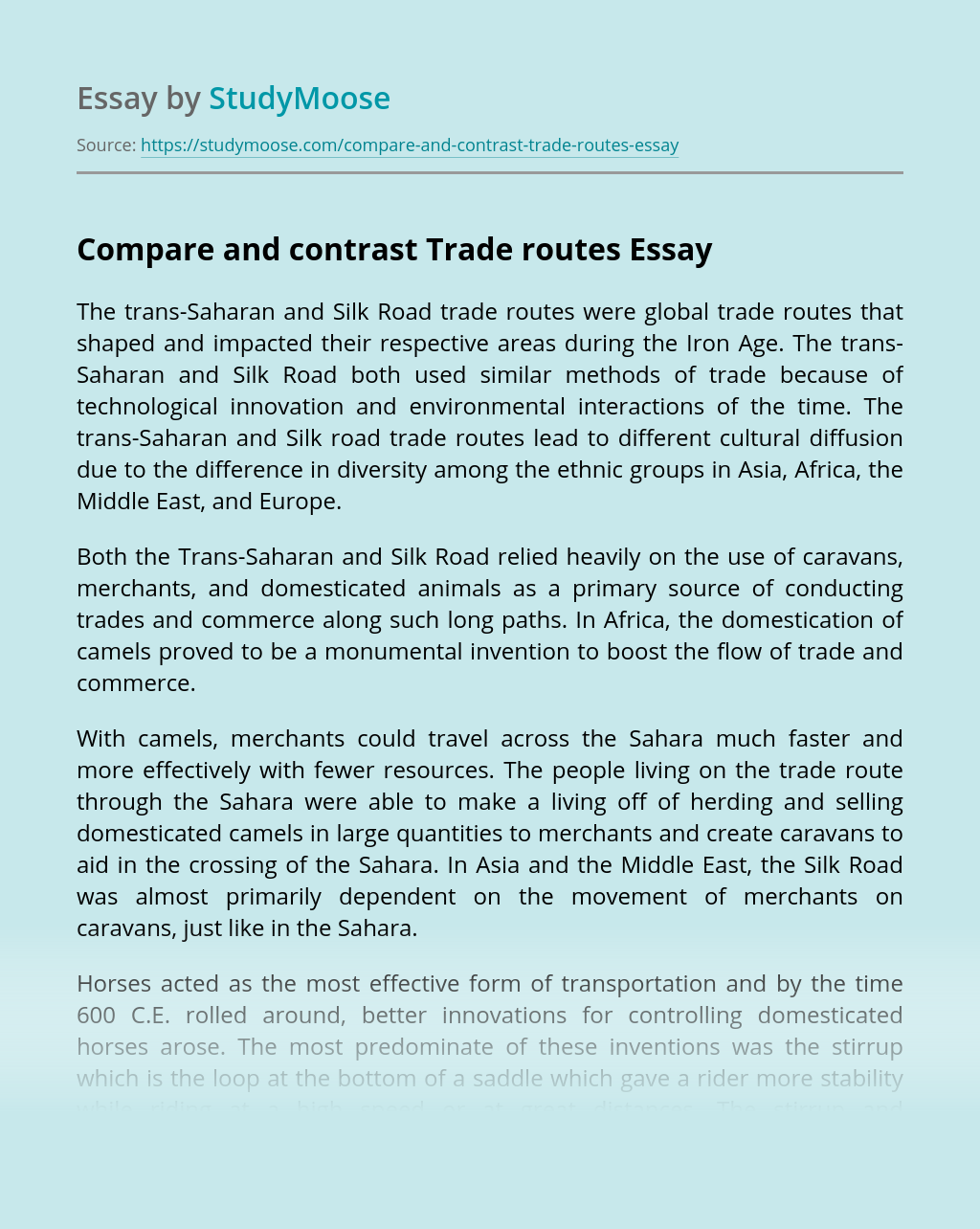 In modern society the problem of racial intolerance particularly draws our attention. It is not surprising due to the fact that any insensitive remarks or decisions made by people of different nations cause a lot of racial riots and strikes. Undoubtedly, without mutual understanding between nations, a country would lose its peacefulness and become unstable...

The Mongols were a nomadic group from Central Asia who joined together under the rule of Ghengis Khan to conquer territory. The Mongols had an enormous affect on the territories it conquered. They generally took on the culture of the peoples they conquered. In China, the Mongols modeled the government similar to China’s but did...

1. Intro The purpose of this project is to develop an international marketing plan for Hong Kong Airlines to broaden to the India market. The very first part of the job will cover the current marketing mix and techniques of Hong Kong Airlines, along with the SWOT analysis. The 2nd part will analyze the India...

Shokan Valikhanov – scientist, historian, ethnographer and folklorist, traveler, educator. Father: Chinghis Valikhanov. Mother: Zeynep Chormanova. Wife: Aysary Valikhanova. He was born in 1835 in the fortress Kusmurun (Kushmurun). At birth he was named Muhammad-Kanapiya and his mother called him Shokan. In private elementary school of aul Kushmurun, Shokan learned the basics of Arabic, Persian,...

The Manila Zoological and Botanical Garden or Manila Zoo emerged from the ashes of World War II, a proud monument of man’s innate love of nature and its multitude of creatures. This showcase of then Mayor Arsenio H. Lacson’s vision was born on May 18, 1959 by virtue of City Ordinance No. 4135 and inaugurated...