The Silk Road was many things: a connection for the East and West, a valuable empire building resource, focus of cultures colliding, and a strategic trade route. The most important of these is the connection between the East and West. Without this trade route cultures would have developed completely different, and the already distant lands would be in seemingly different universes.

The Silk Road is not just one road, but an interconnected series of trade routes stretching across the Eurasian continent.

Don't use plagiarized sources. Get your custom essay on
“ Silk Road ”
Get custom paper
NEW! smart matching with writer

The routes travel roughly 5,000 miles from modern day Japan, through the Middle East, and into Europe on land and sea. As it extends westward from North China, the Silk Road divides into northern and southern routes to avoid the Tibetan Plateau. The northern route passes through the Bulgar–Kypchak region. Its travelers would go northwest through the Chinese province of Gansu, and split into three further routes, two of these routes pass north and south of the Taklamakan desert and rejoin at Kashgar; the other goes north of the Tien Shan mountains through Turfan and Almaty.

All of these routes cross high mountain passes to join up at Kokand in the Fergana Valley, and the roads continue west across the Karakum Desert towards Merv. The southern route is mainly a single road passing through Northern India and into Mesopotamia. Occasionally, the route will spurt towards the ocean and sea ports. The route then goes out of India through mountain passes and into Pakistan. Next the road takes a straight shot into Iran where the route splits to Italy and North Africa.

Soon after Roman domination of Egypt in 30 BC, regular communication and trade between Africa, Southeast Asia, China, Sri Lanka, the Middle East, India and Europe increased on an unprecedented scale. Land and sea routes were closely linked; technologies and ideas began to spread across the continents of Europe, Asia, and Africa. Intercontinental trade and communication became regular, organized, and protected by the governments. Intense trade with the Roman Empire soon followed, confirmed by the Roman craze for Chinese silk, even though the Romans thought silk was obtained from trees. The senate desperately tried to prohibit the wearing of silk saying wearing it was immoral.

Around 1215 to 1360 the Mongol empire ruled over the Asian continent. They helped restore the Silk Road and bring political stability to it. Technology soon spread from the East across to the West. For example, the compass, the astrolabe, printing, and gunpowder traveled along the Road to Europe. The world’s first practical maps seemed to be influenced by Chinese and Islamic maps. Travelers also observed the Chinese junks, a ship later evolved to become one of the most successful ships of its type, which provided a new concept for bigger ships to the Europeans.

During the T’ang Dynasty (starting in 760 AD) trade along the Silk Road began to decline. Faster and better equipped ships were being built therefore sea travel became favored over land travel. However, in the eleventh and twelfth centuries, under the Sung Dynasty, trade tremendously increased because of the country’s dependence on silk. The Mongols then took control of China and the trade stabilized (as seen above). Yet again though, trade declined and land travel became less secure. While the Chinese did still keep the fur-silk trade with Russia, the Silk Road was virtually not in use.

Although the Silk Road greatly impacted the economy of the Western and Middle Eastern countries, knowledge of it outside of China was very limited. Only towards the end of the nineteenth century did interest in the route emerged. At this time European countries were spreading and adding colonies to strengthen their empire. Britain and Russia sent agents to investigate the area. These two countries recognized the threat of the other and the power struggle for the area took off. More interest in the Silk Road appeared when Swede, Seve Hedin, found ancient ruin cities along the route and the treasure hunting began. For fifty years, westerners arrived all along the road to find these ancient ruins and the prizes they possessed. The Chinese understandably took a harsh view towards the greedy foreigners. Some even said they took advantage of underdeveloped China and the artifacts would have been better off in

From its birth in 300 BC, through its heyday of the Tang dynasty, until its slow demise six to seven hundred years ago, the Silk Road had a unique role in foreign trade and political relations, stretching far beyond the borders of Asia itself. It has left its mark on the development of civilizations not only on Asia but across the world. Silk, fur, pottery, tea, ideas, beliefs, and cultures all spread across the continent, because of the Silk Road. However, because of the growth of technology the Road is of little to no use now, and all that is really left now is some old roads and ancient ruins. 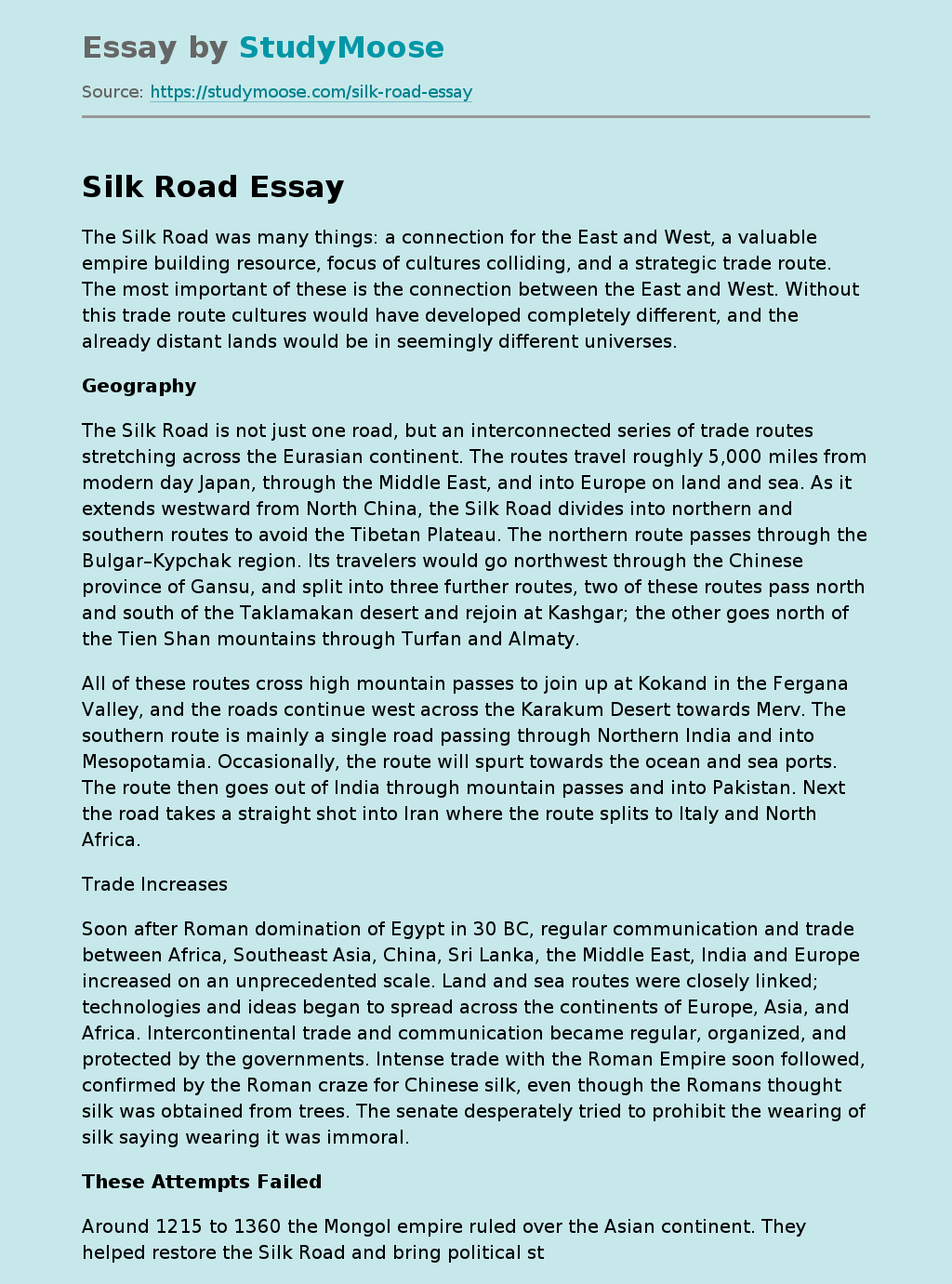