My research project proposes important information on culture is one of the important sectors while talking about international trade. The east and west culture are the two most important cultures in the world, which have differences in terms of values, convention, language, consumption pattern, social organization, laws, trade system, socio-culture, and many other factors which are important for any kind of international trades in the exchange of goods and services amongst different cultures. This research aims to focus on the cultural difference that are faced in today’s commercial transaction and analyzing the appropriate measures to deal with these differences.

The word culture is defined as an” integrated system of learned behavior patterns that are characteristic of the member of any given society the total way of life of particular groups of people. It includes everything that a group of people thinks, says, does, and makes-its customs, language, material artifacts, and shared systems of attitudes and feelings. Culture is learned and transmitted from generation to generation.

”( Robert Kohls, the former Director of Training and Development for the United States Information Agency)
As the world is expanding with technology, it is becoming easily accessible for people from different cultures in communicating with other countries on a daily basis. In all these contexts the biggest problem which almost all the cultures face today is intercultural communication. Although people can learn their language, hobbies, working culture but we will still find difficulty in communicating when it comes to cultural differences.

There are problems which are caused because of cultural differences but due to increase technology and modern transportation such as Airplane, it is becoming easy for people from different cultures to travel to different parts of the country. However, people can travel to different countries and learn their language and culture but there are still other factors such as social systems, laws, and other ways to do international business.

Moreover, the success of international business totally depends on understanding culture and how well you carry their values, attitudes, laws, and behavior in the society. “In interacting with foreigners, native speakers tend to be rather tolerant of errors in pronunciation or syntax. In contrast, violations of rules of speaking are often interpreted as bad manners, since the native speaker is unlikely to be aware of sociolinguistic relating”. (Wolfson,1983: 62).

Purpose of the Research

As we are talking about Eastern and Western differences in culture, I will focus on natural and practical methods to give a description of various differences occurring in their culture.

Eastern culture believes that they know western culture just because they would have watched the movie, ate in an American restaurant, can speak fluent English, their hobbies or anything about the western culture which a person should know but you can not say that you know the western culture better than the western people. The purpose of the topic is to make every culture understand it is not always necessarily possible that if you follow any different culture and behave in the same way as they behave and mean that you understood everything about their culture but they are wrong who are thinking in that way because there are certain values, beliefs, and behaviors which are hidden, that cannot be incorporated.

Background of their Culture

The culture of East and west is totally different from each other as they have different social systems. The eastern culture is originated from two main countries- China and India. Both cultures were known for their famous river, China by the yellow river and India by the Hindu river. During the dang dynasty, the Chinese culture went overseas to Japan and mixed with Japanese culture and formed themselves in their way.

When Eastern culture came into existence after the two rivers, another famous culture was brought up by the Mesopotamian Plain-the Mesopotamian Civilization. Later, Mesopotamian Civilization evolved into the culture of Ancient Greece and Ancient Rome, and these cultures were known as an important part of the European Culture. Same to Chinese Culture, the European culture also crossed seas due to settling down of colonist England in America. So this is the reason American culture is the same as European Culture. At the same time
In Eastern culture, most languages belong to ancient languages while Western culture belongs to the Latin system. There are many other differences such as the human race but also they are far from each other without any interference they have cultural differences.

The Role of Culture in Business

With the increase in globalization in every country, cross-communication is making a big difference everywhere. Eastern and Western cultures can not be differentiated only on their way of thinking, their opinion but also they’re the way they behave in their daily life.
In my research, I found that Germans, Japanese, and Scandinavians adapt successfully to the international market because they believed that cultural differences are not only the problem, there is a problem which creates more differences when you don’t spend time and fund in the international market. There are many other problems that the international companies have today in doing business. In context with this “Steven Globerman” discussed the issue and said “Culture differences do not as a rule that prohibits doing business internationally, although they often oblige management to modify the way business is done from region to region. While modifications may be required, to a greater or lesser extent, in virtually all of the international firms’ activities, the particular areas that seem to be affected by cultural differences are the marketing and personnel relations’ functions.” This tells you that it’s very important to change the policies, laws, and also your marketing strategies according to the culture of that region where you are planning to set up your business. He is indirectly suggesting that managing and communicating is only possible when we will apply different techniques and methods according to the culture.

There are some of the basic differences that Eastern and Western culture and will summarise them in points so as to have a better understanding: – 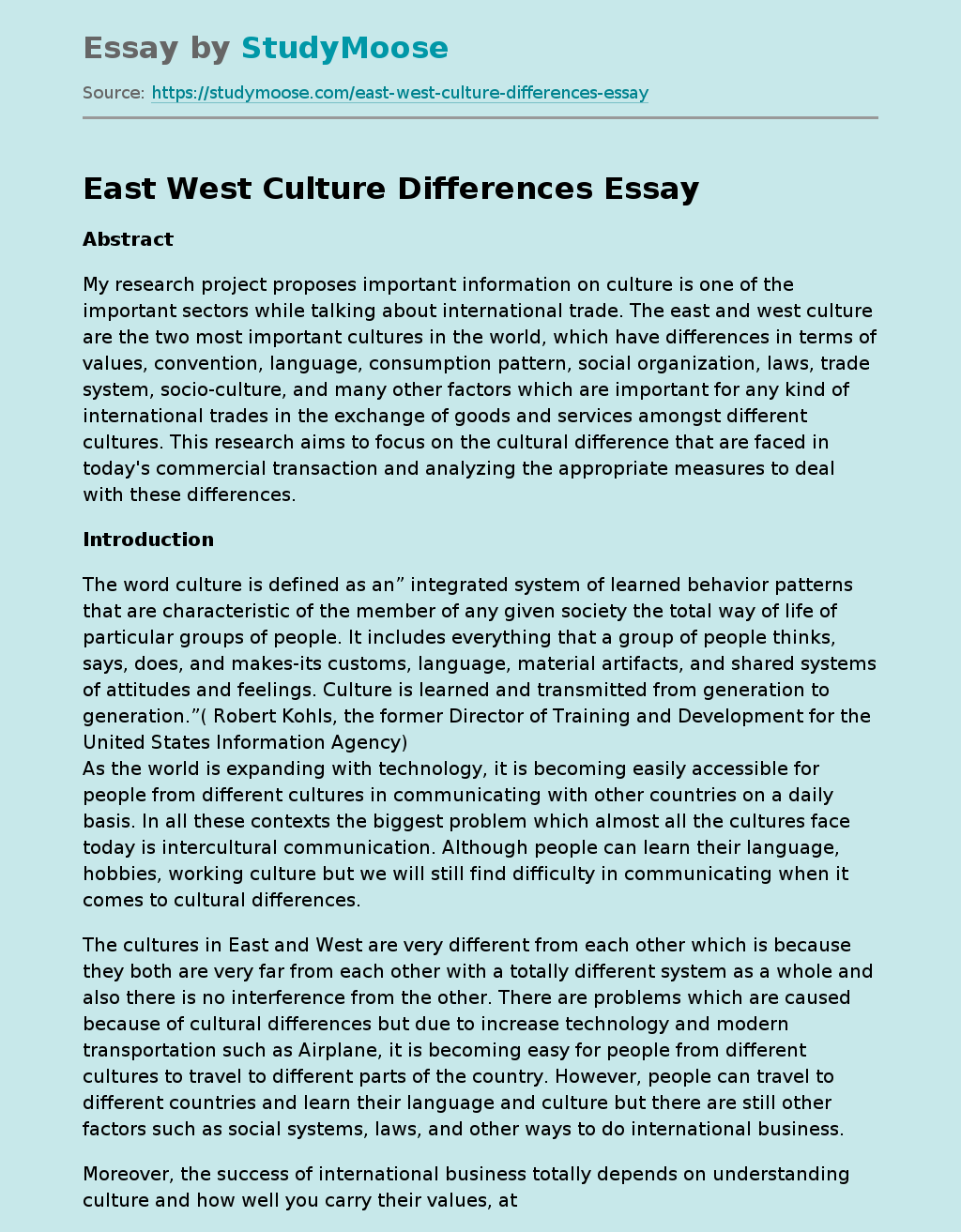