The problem in The Trans Trust Sprl v. Danubian Trading Co. Ltd. Case is if there is a contract or not between two parties. Also, whether a letter of credit is an essential part for forming a contract. In the case there is a buyer who is from Belgium and a seller who is from the United Kingdom. The British seller has arrange to buy the goods from a third party (American company).

The seller required the letter of credit it in order to insure the American wholesaler that he will be paid. The buyer never opened a letter of credit. Subsequently, the seller started proceedings against the buyer, calming damages for breach of contract.

The plaintiff was the British buyer because it was the buyer who sued the Belgian buyer for loss of profit due to the breach of contract on part of the Belgian buyer by not providing the letter of credit as agreed upon.

The defendant is the Belgian buyer because it was the Belgian buyer who was being sued by the British buyer for a breach of contract and had to defend oneself against the accusations in front of the court and prove that they owed no damages for loss of profit.

The applicable law is CISG.

CISG applies to contracts of sale of goods between parties whose place of business is in different states. Furthermore, the contracting parties have to be contracting states. Next to that, the rules of private international law lead to the applications of the law of a contracting state. The contract made between the buyer and seller in the Brussels meeting meets the requirements, and therefore the applicable law is CISG. Questions that the Court have to answer- questions 5

The Questions that the court had to answer were:
-Did a contract exist?
-Is the LOC essential for the contract?

The court came to the decision that a contract did exist. At the meetings of Brussels the contracting parties made an oral agreement about gauges and dates of delivery. Therefore, the judge found that there was a concluded contract between the seller and buyer. Next to the fact that the court had to decide if there was a contract, they had to decide if the LOC was essential for this contract. At the meetings in Brussels, next to that there was an oral agreement about a contract, there was also an agreement made about that the buyers would be personally responsible for seeing that a credit should be opened forthwith. Therefore, it was clear to the court that a LOC was an essential term to the contract. This was not fulfilled by the buyer, even though the seller extended the time for the LOC delivery.

Arguments of the parties- question 6

The buyer failed to do so means that the buyer did not perform is contractual obligations which led to a breach of contract. The defendant (buyer) maintains that there was never a contract. The defendant argues that both parties discussed on the terms above mentioned (and the writing on September 25 of 19950), but that it was just an intention. The defendant claims that the contract was conditional on a letter of credit being provided and that if no such letter was provided, no obligation was to be assumed by his side.

Rulings of the Court of Appeal- Question 7

The judge or the court did not accept the argument of the defendant and the statement he made in writing on September 25 1950 of just being an intention. The court says that the statement on September 25 of 1950 is a solid promise by the defendant. The defendant promised that the credit will be opened forthwith. The court ruled that there was a concluded contract by the plaintiff and the defendant to sell and buy the steel for a December/January delivery because the meetings in Brussels resolved all the discrepancies regarding gauges and dates of delivery.

The court explains that part of the contract was that the buyer would be personally accountable for making sure that a letter of credit could be opened forthwith. On those findings it is clear that the stipulation for the credit was not a condition precedent to the formation of the contract at all. The court says that the credit was an essential condition term for the performance of the contract and therefore the condition was not fulfilled. The plaintiff did expend the time for the credit to be received but nonetheless the letter of credit was never received (even after a reasonable notice). For this reason the court rules that the plaintiff is discharged from any further performance on his side and is entitled to claim damages. .

The judge explains that the defendant knew that the plaintiff could not have received the goods at all if he did not have received the letter of credit. This loss was foreseeable by the defendant and led to a breach of contract. The plaintiff’s loss would be the profit he would have made if the letter of credit was provided. The foreseeable loss is the loss of profit no matter the market price goes up or down. The loss of profit suffered by the plaintiff is based on the difference between the price at which the seller had agreed to buy S.A Azur , and the price it would have received had the contract been performed. So the court/ judge awarded the plaintiff (seller) $3 214 for damages. 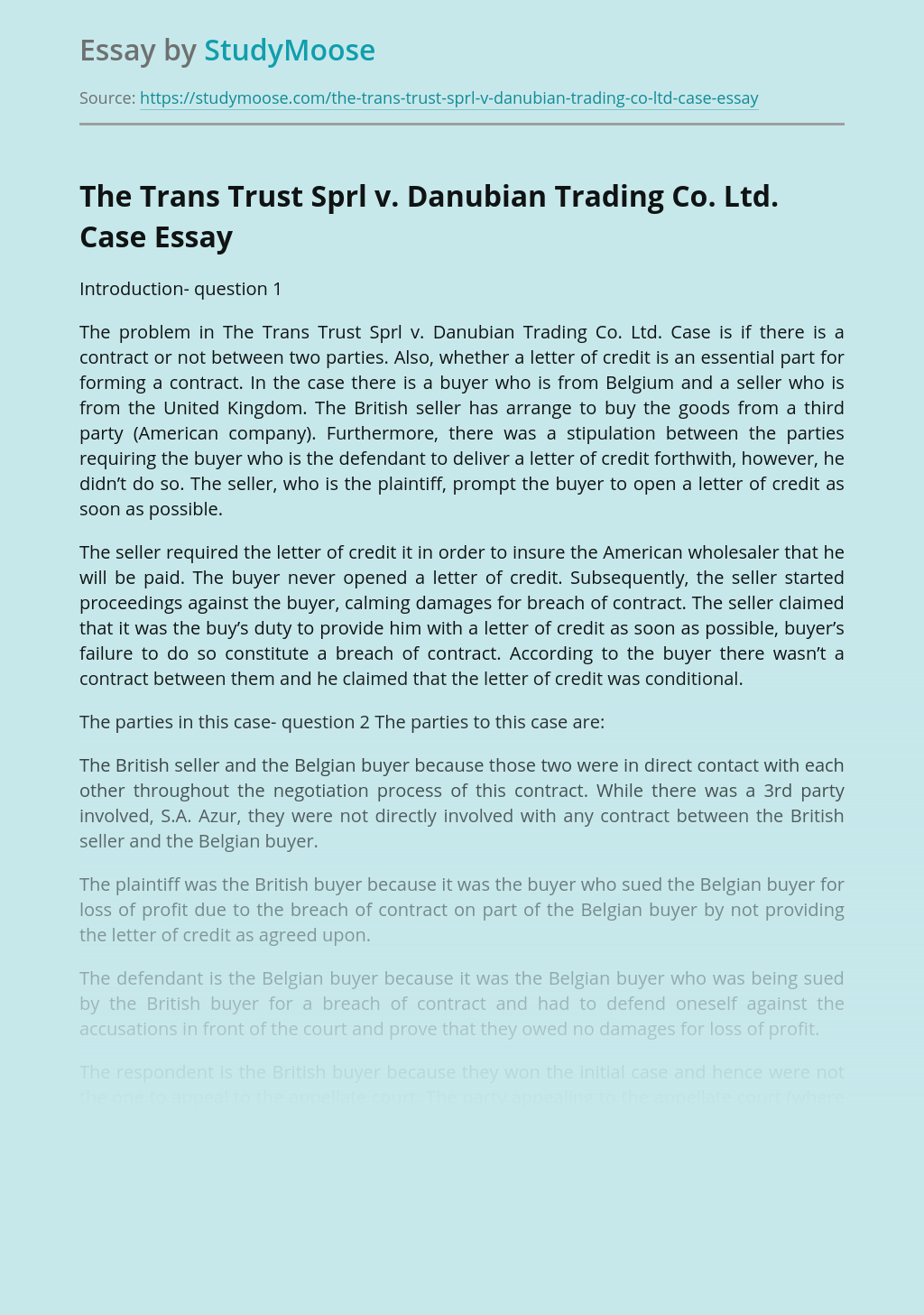 Patrick Henry's Use of Logos

Rate this post Almost 2500 years ago Aristotle was born, he was born into a wealthy educated family in Greece. He was a student of the famed Plato (another Greek philosopher) and went on to make many great discoveries and theories. One of Aristotle’s greatest teachings was in the art of rhetoric. Aristotle said that...

Rate this post Introduction- question 1 The problem in The Trans Trust Sprl v. Danubian Trading Co. Ltd. Case is if there is a contract or not between two parties. Also, whether a letter of credit is an essential part for forming a contract. In the case there is a buyer who is from Belgium...

Case Law and the Doctrine of Precedent

Rate this post In this essay I will be going over numerous sights that will assist me answer the given concern. My first point is on the Hierarchy of the courts In this point I will describe the different ‘levels’ there are in the English system. My 2nd point is Stare Decisis and what it...

Rate this post Advertising and Its Classification “Advertising Fifteen Basic Appeals” by Jib Fowles. Jib talks in his essay about how advertising enticesus us through imagery approaches,The power of imagery in marketing is substantal. We can becalled walking advertisements,from the jewelry we wear to the shoe’s on our feet we are promoteing brands and logos...