She had, had an affair with Elizabeth’s husband John Proctor and although had been dismissed from her service at the Proctor’s house where she used to work, she was still in love with John Proctor. She wanted Elizabeth Proctor to die so that she could take her place. That is why, as we found out earlier, she drank that blood charm showing what a vindictive sort of a nature she had. Since that didn’t work she uses these witch trials to her advantage and accuses Elizabeth of witchcraft.

She plans the whole thing very carefully making great efforts to make her accusation believable as Elizabeth Proctor had a very good name in the village. She used the poppet which Mary Warren (she works at the Proctor’s) made at the court. Mary had put the needle she used to make the poppet into the belly of the poppet for “safe keeping” as she said when she was questioned.

Abigail used this fact and stuck a needle inside her own belly and made sure that people saw her with the needle stuck inside her. In fact she does this at a time where it would have been totally unexpected. She stuck the needle in right at the dinner table, hiding the needle beneath the table. When Cheever explains what happened this is what he said “She sat to dinner in Reverend Parris’s house tonight, and word nor warning she falls to the floor.

Like a struck beast, he says, and screamed a scream that a bull would weep to hear.

And he goes to save her, and, stuck two inches in the flesh of her belly, he draws a needle out. And demandin’ of her how she come to be so stabbed, she testify it was your wife’s familiar spirit that put it in” This makes her accusation strong because anyone would think that a sane person would not do a thing like that to themselves just so they accuse someone. It seems too extreme a thing to do. It doesn’t seem possible unless the person is suicidal or has in fact been attacked by a spirit, which is what Abigail said.

That she had been attacked by Elizabeth Proctor. In fact Abigail made sure that all throughout the witch trials no one came in her way and if they did she used her skills in acting and her initiative to deal with the problems. As we look at Act 3 we see that Mary confesses to the fact that she and the others had in fact been lying, about seeing spirits and being attacked by them. When Abigail is asked, she denies it and puts on such a performance that Mary takes her confession back and goes as far as to say “Abby, Abby, I’ll never hurt you more! ”

But we can’t hold Abigail Williams entirely responsible for her actions, as we find that Abigail had, had a dreadful childhood. She saw her parents being murdered in front of her. “I saw Indians smash my dear parents’ heads on the pillow next to mine…. ” So her being an orphan, it couldn’t have been easy to live without her parents since childhood, not only that the girl had seen her parents being murdered which as we all know can be traumatising for the best of us, let alone a child. Having Parris as a guardian couldn’t have helped things either.

So from these facts we can gather that Abigail wasn’t a normal person like you and me but may well have been psychotic. We also know that she had been seduced by a 35 year old, married man, John Proctor. We know she had fallen in love with him. Some of the things she does it out of her love for John Proctor “I look for John Proctor that took me from my sleep and put and put knowledge in my heart! ” like accusing Elizabeth Proctor, although extreme, but out of love. The lies she tells, about her dancing and doing nothing else, were lies to save her self from being hanged.

She did not want to die and so for that reason she lied. So you can see from this that Abigail did play a huge role in the witch trials but also that she cannot be held solely responsible for what she did. There were also the other people who blowed the whole thing out of proportion such as Ann Putnam, and the Walcott family. We see that as soon as Ann Putnam enters the Parris’s house near the beginning of the play, one of the first things that she says in reference to Betty Parris’s condition is “How high did she fly? How high?

” She starts jumping to the extreme conclusion “I’d not call it sick; the devil’s touch is heavier than sick” She and her husband just assume that witchcraft is at play “Thomas, Thomas, I pray you, leap not to witchcraft. ” To some extent the community itself was to blame. The community was a theocracy and a strict one at that. Extremely religious, inflexible, and very rigid about religion. The rules and regulations were of extremity too such as dancing was a whipping offence. We also find that they are quite judgemental. 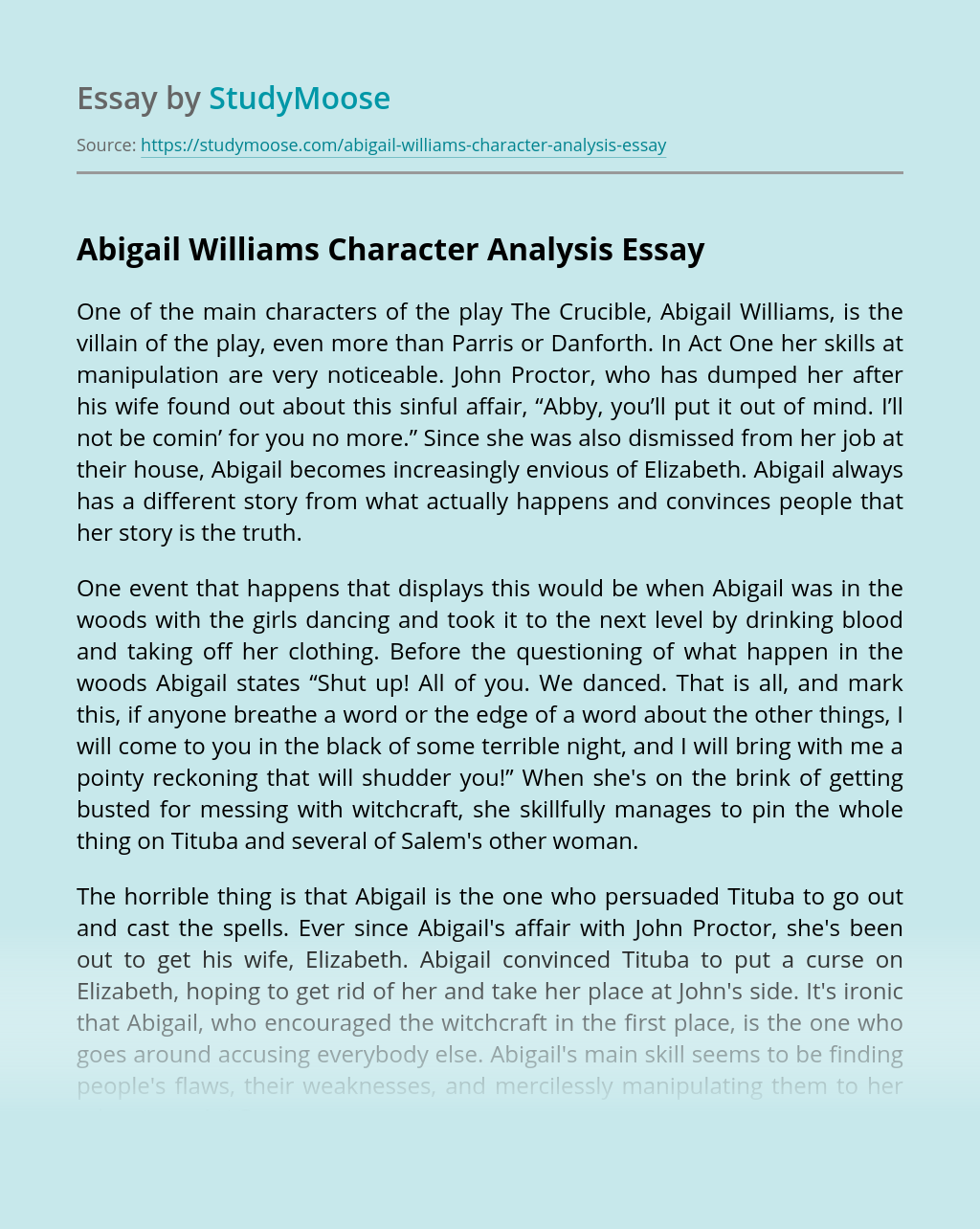