A Visit To the Tang Shipwreck Cargo Exhibition

I went to visit the Asian Civilisation Museum, ‘ Tang Shipwreck’ exhibition on the 8th of May sometime after lunch at around 2 pm. The Tang Shipwreck tells a story about the contacts between people from different backgrounds during the trading of their own technology and artistic influence such as silver, golds, and ceramic stoneware from the Middle East to India, Southeast Asia, and China.

The first artifact I found interesting is the green splashed ceramic bowl with a dragon medallion on it.

Don't use plagiarized sources. Get your custom essay on
“ A Visit To the Tang Shipwreck Cargo Exhibition ”
Get custom paper
NEW! smart matching with writer

The Changsha kilns are made with highly unusual creative supernatural creatures, in this artifact, a dragon. The dragon represents imperial power, a mystical creature of the high cultural and spiritual symbol in China history and mythology. It represents many of their beliefs from both regional and cultural traditions which include ritual acts, dances, ceremonies, and sacrifices.

The significance of this shows the behavior and style of the Chinese where they use their national culture to express and represent themselves as they go about establishing trading and negotiating relationships with others.

The second artifact is a wine bowl with a Chinese inscription on it which says ‘ tea bowl’. I think it is important as Tea itself played a very huge role in China. The art of tea is known just as a daily practice in China. Known for its medicinal properties, adding leaves into their food or as an antidote.

It has become a source of economical development. As it plays a significant role in China, this level of significance has been brought into their form of trading where they implement the beliefs of spiritual wisdom over, it allows others to bond over the Chinese culture and pride which is known to be beneficial in enhancing people’s social accomplishment and appreciation.

The trading of these artistic goods is a consumer culture marketing strategy. As not only it fits the needs of the consumer of the traders, it also spreads China’s icons throughout the travel through expansion and stimulus diffusion. Expansion as products representing China was being traded off to the Middle East where it remains there. While stimulus diffusion comes after as the Middle East soon started to adopt the culture and started creating their own replica of the ceramic bowls.

A Visit To the Tang Shipwreck Cargo Exhibition. (2020, Oct 16). Retrieved from https://studymoose.com/a-visit-to-the-tang-shipwreck-cargo-exhibition-essay 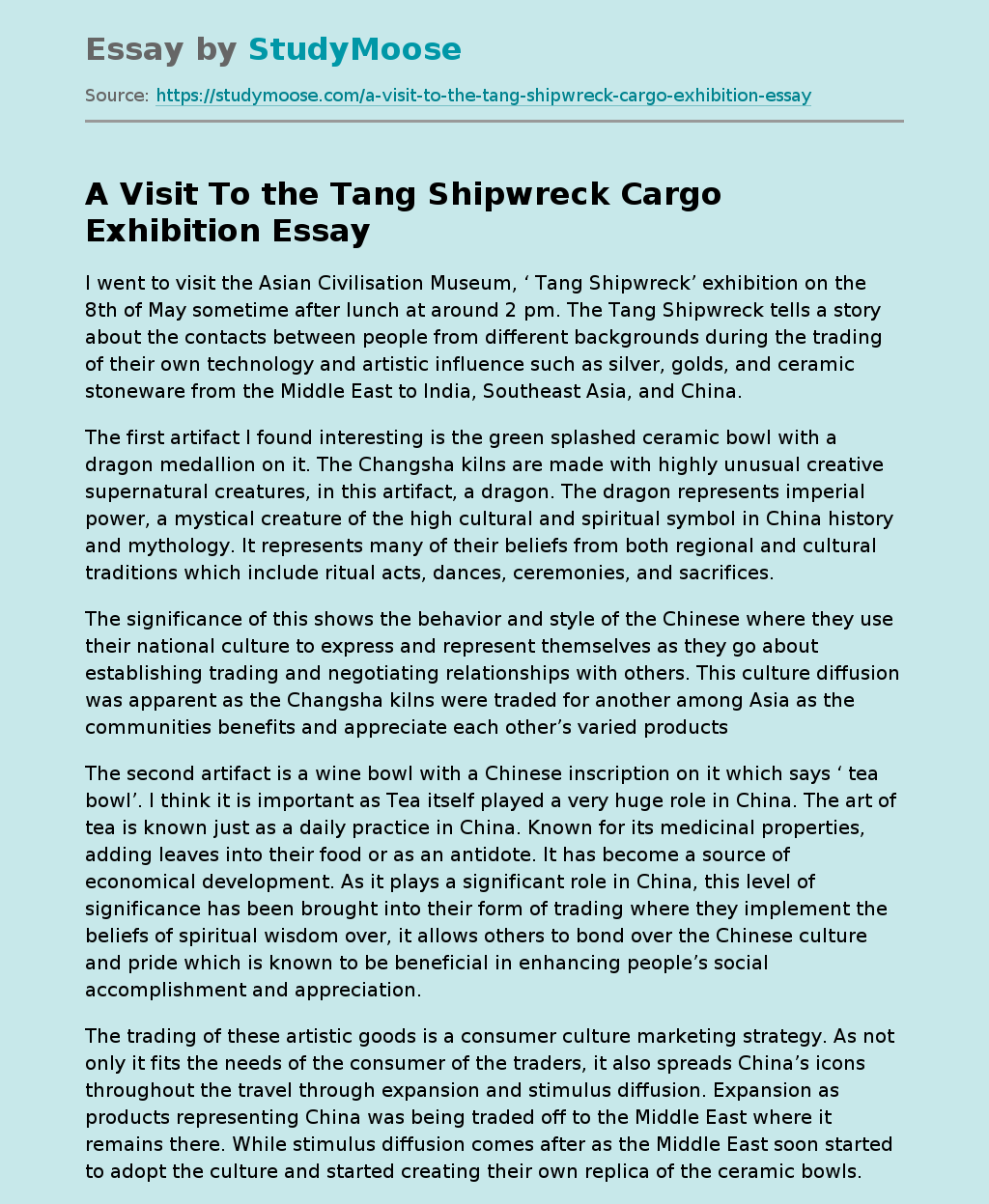