A Psychological Perspective in “Oedipus Rex” and “Trifles”

The two plays Oedipus Rex by Sophocles and Trifles by Susan Glaspell are great with detailed and remotely fascinating psychological perspectives. A psychological perspective is a perspective that includes the use of the author’s or characters background and/or emotional state to create the story or play. Oedipus Rex and Trifles both offers a great deal of insight into the minds of the characters, that insight also focus on what influenced the characters decision throughout the play. In many stories and/or plays the setting or era can add to the moral background of the characters.

Don't use plagiarized sources. Get your custom essay on
“ A Psychological Perspective in “Oedipus Rex” and “Trifles” ”
Get custom paper
NEW! smart matching with writer

Both authors let the reader in on the emotional and psychological influences of the characters as to why they acted in a certain way. A good example on how the setting sets up the entire story or play is in Oedipus Rex where the era was Greek.

Throughout the play the reader/audience is introduced to Greek mythology and oracle prophecies that sets up the era of the play and also gives a persona on what type of psychological issues to expect.

Another example is in Trifles where the era was 1916 when women had no importance and played secondary roles and was not equal to a man. In Trifles, the play has both psychological and feminist critical perspectives. A good example of feminist critical perspective is when the attorney and sheriff decided that there is nothing important in the room:”Nothing here but kitchen things” (287). This line is the first of many disparaging comments said to minimize the importance of woman in society.

The men criticized Mrs. Wright’s housekeeping skills, irking Mrs. Hale and the Sheriff’s wife Mrs. Peters. This incorporates setting and background about the kind of era to help the reader gain the insight needed to get into the minds of the characters.

In Oedipus Rex, Freud’s Oedipus complex shows throughout the play. It is a group of largely unconscious (dynamically repressed) ideas and feelings which center on the desire to posses the parent of the opposite sex and eliminate the parent of the same sex. This is exactly what happened in the play and the Oedipus complex is named after the Greek mythical character Oedipus. This is the type of psychological perspective and mind frame that Oedipus portrays in this play by not intentionally murdering his father, marring his mother, committing incest, and carrying out the oracles prophecies. The reader can conclude that Oedipus found out about what he had done by saying the following: “I think I have called curses on myself in ignorance” (755-5) fearing that he has murdered his own father.

“They will all come out clearly! Light of the sub, let me look on you no more!” (1183-4) from this quote the reader can feel the psychological insight of Oedipus and how the pain of finding out the truth took an emotional drain on him. In Trifles, Mrs. Hale and Mrs. Peters unveil a psychological profile of a desperate housewife. The women observed clues that revealed the bleakness of Mrs. Wright emotional life. They theorized that Mr. Wright’s cold, oppressive nature must have been dreary to live with. To the audience/reader we could conclude that Mrs. Wright has been very unhappy since she married her husband because of this description by Mrs. Hale “She was kind of like a bird herself- real sweet and pretty, but kind of timid, – fluttery. How she did change”.

The psychological perspective of the woman is that they can understand how Mrs. Wright felt, something that the men could not. The reason for that is because Mrs. Hale revealed that she lost her baby and Mrs. Peter’s talks about how a boy hatched her kitten so they both can relate to Minnie and the lost of her bird. As the reader we can look deep inside the minds of these troubled women and have some sort of compassion for Mrs. Wright and the other women.

A Psychological Perspective in “Oedipus Rex” and “Trifles”. (2016, Dec 27). Retrieved from https://studymoose.com/a-psychological-perspective-in-oedipus-rex-and-trifles-essay 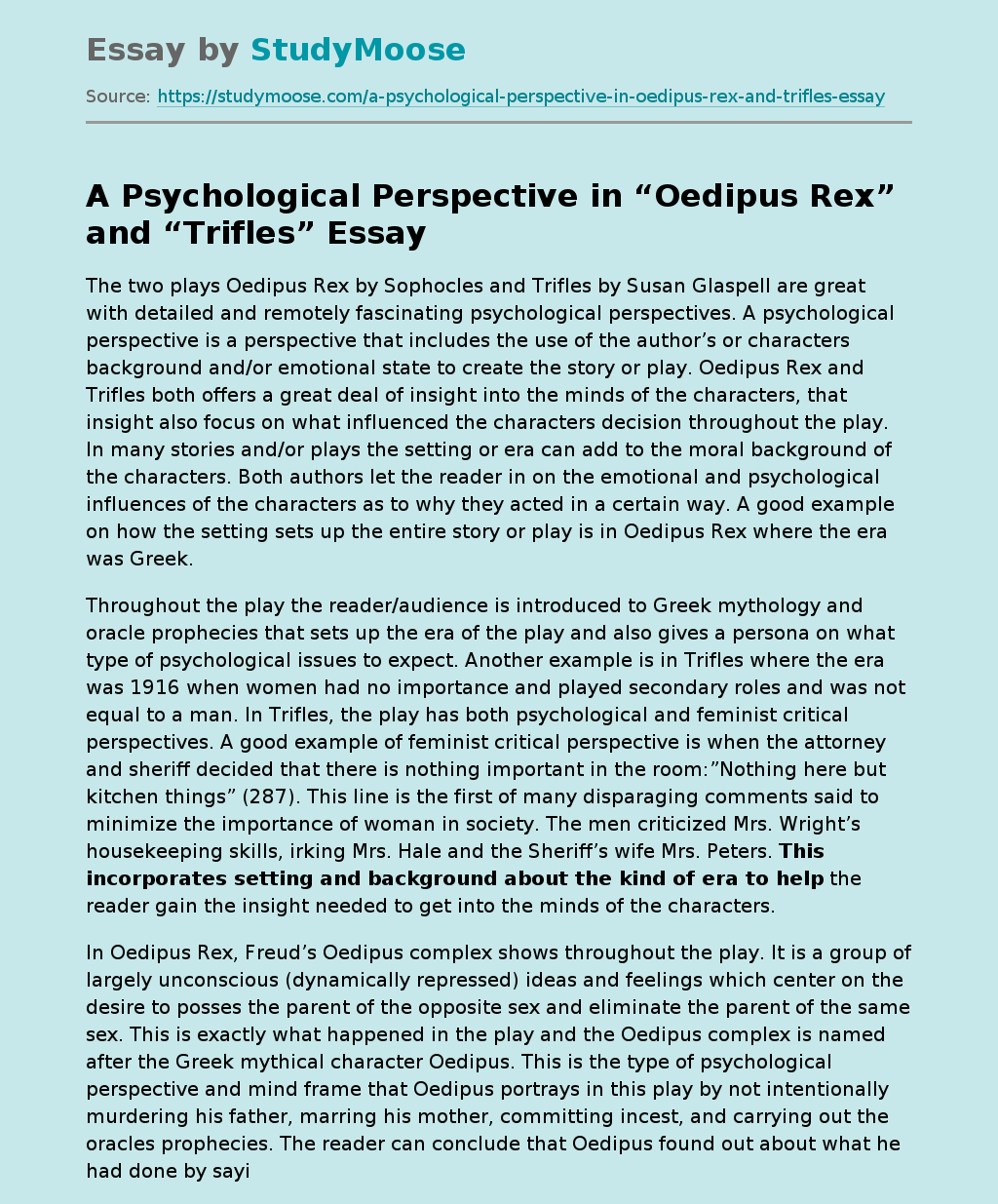