A newspaper article(Straits times, 2014) stated that cleanup by the International Coastal Cleanup Singapore(ICCS) shows that the littering has worsened over the past decade, the average weight of trash picked up per metre of coastline has increased from 0.25kg in 2002 to 0.74kg in 2013. This emphasises how much litter there is and it is one of the reasons of the severe water pollution in Singapore. I learnt about the issue of water pollution along the beaches when I passed by the East Coast Park in Singapore and saw a lot of litter both in the sea and along the coast, such as plastic bottles, plastic bags, styrofoam cups, aluminium cans and much more.

Don't use plagiarized sources. Get your custom essay on
“ A newspaper articleStraits times 2014 stated that cleanup by the International Coastal ”
Get custom paper
NEW! smart matching with writer

It was then when I realized how severe water pollution is even in a country like Singapore where there are strict laws and heavy fines implemented to dissuade littering anywhere. National Environment Agency(NEA, 2018) stated that Singapore is a country with limited water resources so any water body is important and it is necessary for water quality to be carefully regulated.

Thus, even the slightest pollutant will adversely affect the water quality of Singapore’s drinking water or water for recreational activities, impacting the health of the public.Feelings:I feel that this issue of water pollution is very significant but not many interventions are applied. Although Singapore has implemented heavy fines for littering, it does not seem to deter everyone from doing so since there is the evidence of the littering in the water bodies or even along the shores as the rubbish is washed up by the waves of the sea and left behind during low tide.

This shows that just having rules and regulations are not enough to stop people from littering and contributing to the water pollution, so there should be more initiatives to help prevent this. Water pollution has affected both my physical and emotional well-being since beaches are both a source of entertainment and relaxation for me as they can provide spaces for me to destress through swimming or running, or just to admire the waves and take a break from the fast paced society.Visioning:Water pollution will continue to be a pressing issue over time in my own life since it cannot be solved in a short period of time as people are not able to change their habits suddenly and stick to it. This issue will be tackled over time as everyone become more conscious about the consequences of littering that will result in water pollution along the beaches. Water pollution will cause the sea water or any water bodies to lose their attractiveness and serenity due to the negative image created due to the rubbish. In my own life, I will do my part in reducing the amount of plastic and paper used and also try to recycle whenever possible. If everyone are to do their part or make a small change to their lifestyle, there will be a great change for the better regarding the issue of water pollution.Change:My vision is to improve the issue of the water pollution through reducing the amount of litter and also to clean up as much of the pollution as possible. But this will take both manpower and time since the water bodies are polluted for a long time and the pollutants may be difficult to separate and clean with the current technology. For Singapore, the rules and regulations have to be more strictly enforced since the signs that shows no littering’ and the fines are not enough to stop people from doing so as the consequences are too lenient and the people think that throwing a little bit of rubbish will not result in them being noticed by any authorities. Their viewpoint have to change as a little rubbish by each person will contribute greatly to the water pollution. The government can attach a few officers to each water body to patrol frequently, dissuading people from littering since they fear that they might be caught and fined. The public must also be educated on the issue of water pollutions and the act of recycling, so that they can understand how their actions can harm the environment and thus be more mindful, resulting in a slower spread of water pollution or even an improvement in water cleanliness due to their recycling and not disposing their rubbish anywhere.Personal Inventory and Support:I would need the support of NEA and various schools since if an educational campaign is raised, they would have to work together to pass on the professional knowledge of the reasons behind water pollution, along with what the public can do to alleviate the problem and also to introduce the idea of recycling to them.Personal ActionsјTo make a big change by ourselves, we can utilise the vast online platform of social media to reach audiences globally. A group can be formed to work together to create an account on Twitter, which targets the issue of water pollution not only in the local context, but also on a global scale since this issue is common in many countries. Team members must be very interested and willing to make a difference in the state of the water bodies, this way not only can the issue be brought to attention in Singapore, it can also pique the interests of others with the same thoughts, causing everyone to be more conscious of their own actions and spread the message to prevent further water pollution.

A newspaper articleStraits times 2014 stated that cleanup by the International Coastal. (2019, Aug 20). Retrieved from http://studymoose.com/a-newspaper-articlestraits-times-2014-stated-that-cleanup-by-the-international-coastal-essay 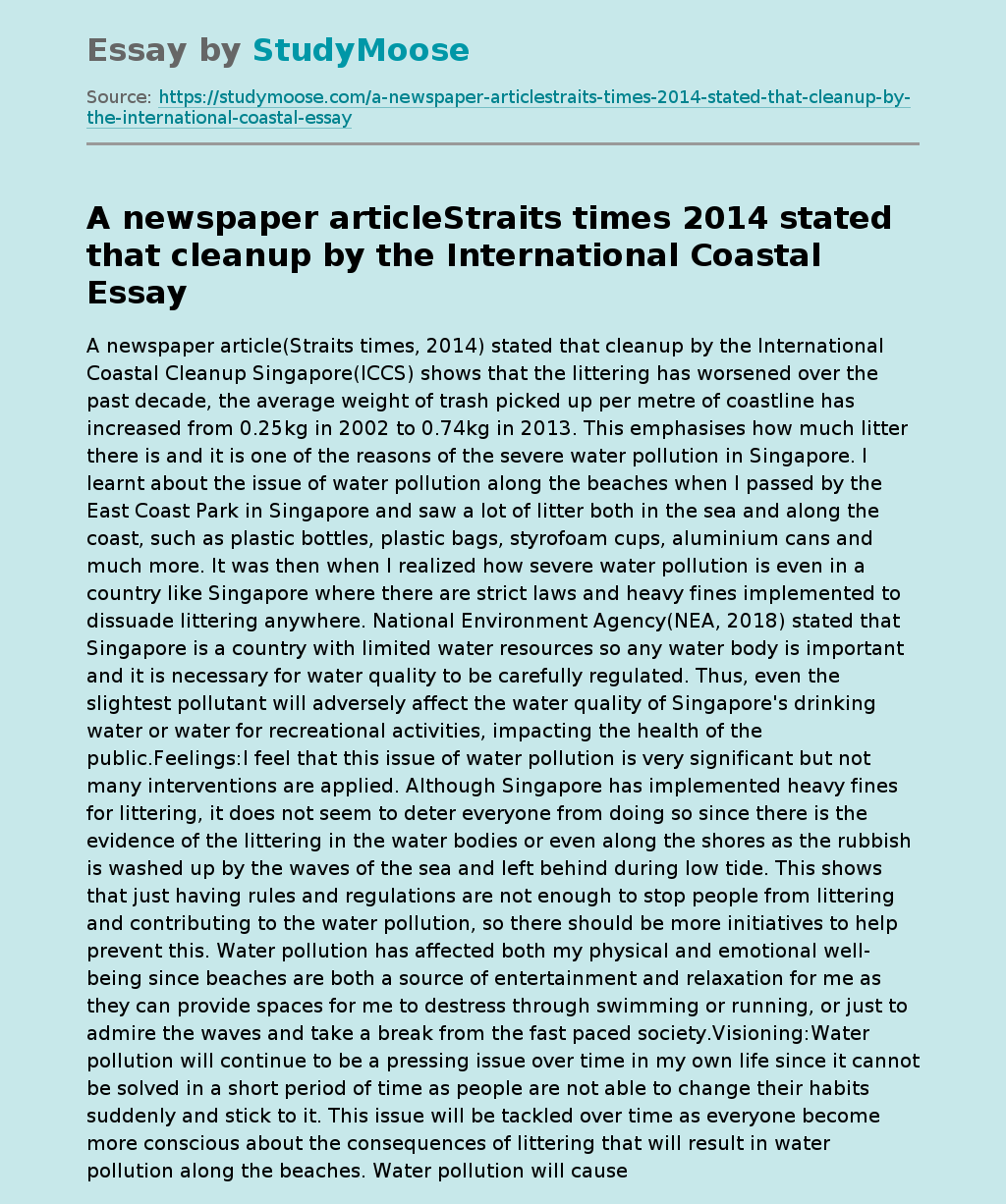