The Formation of Coastal Landforms

Coastal landforms are formed in several different ways and can depend on several factors. The factors are things such as wind direction rocky type and fetch of the waves around the landform. These factors all contribute to create distinctive landforms. This essay will be identifying the ways in which these coastal landforms have been made Headlands and bays such as Beachy head on the south coast of England. Headlands and bays are often found on the same coastline. A bay is surrounded by land on three sides, whereas a headland is surrounded by water on three sides.

Don't use plagiarized sources. Get your custom essay on
“ The Formation of Coastal Landforms ”
Get custom paper
NEW! smart matching with writer

This because the formations are caused by bands of resistant and weak rock which when in contact with the discordant waves makes the soft rock erode much quicker to form bays. The Bay is made bigger by the spray from the waves also causes chemical weathering on the cliffs of the soft rock. Refraction of waves from the headland, these waves drift inwards towards the bay , these waves have more of an effect on the weaker rock so it erodes rapidly.

Headlands are formed when the soft rock has retreated to form a bay which leaves a headland sticking out into the water. There is a lot of erosion on these headlands as wave energy is concentrated on them. These waves have more energy than those in the bay because there is no shelter from wind so the waves have a longer fetch when they hit the headland. Waves hit the headlands at right angles which increase the power of the waves.

A Variety of sub aerial processes can also affect the rate of erosion on a headland. The headlands in Beachhead are created out of chalk. Though they are highly resistant to waves and the forces of abrasion and hydraulic action that come with those waves. The beachhead chalk cliffs are vulnerable to sub aerial processes such as acid rain.

The formation of headlands allows many other coastal landforms to be created. Such as the stack on the isle of Purbeck named Old harry. This stack is formed when the waves crashing against the headland are refracted so they hit another part of the headland. This continued hydraulic action causes a fault to form in the headlands from all the hydraulic action. This fault s then widened by the air trapped in the waves being forced into the cracks and making it widen. This process repeats itself until eventually a cave is forms. The waves will then refract off the headland and flow into this cave by doing this they will gradually erode it until the cave passes the whole way through a headland and form an Arch.

This arch can be widened by the waves eroding either side of the arch so that two pillars barely support the bridge of land overhead. This as well as biological weathering which weakens the over head rock. Eventually this overhead rock is not supported and it collapses into the sea leaving one arch stuck out to sea. This arch can then be knocked down to a stump where hydraulic action and abrasion weaken the foundations of the stack and leave a wave cut notch on the stack where erosion has taken place. If this wave cut notch becomes very big it can collapse the stack and leave a stump.

This is seen by an example of old Harry and his wife who is the stump alongside. In conclusion Coastal landforms such as Headlands, Stumps and Bays are formed from hydraulic action of the waves weakening parts of the coastline which then allows other methods such as weathering and erosion to form new landforms such as stacks which result from the erosion of headlands. Factors such as fetch and rock type an also play a part in the formations and speed of the formations.

The Formation of Coastal Landforms. (2016, Dec 11). Retrieved from http://studymoose.com/the-formation-of-coastal-landforms-essay 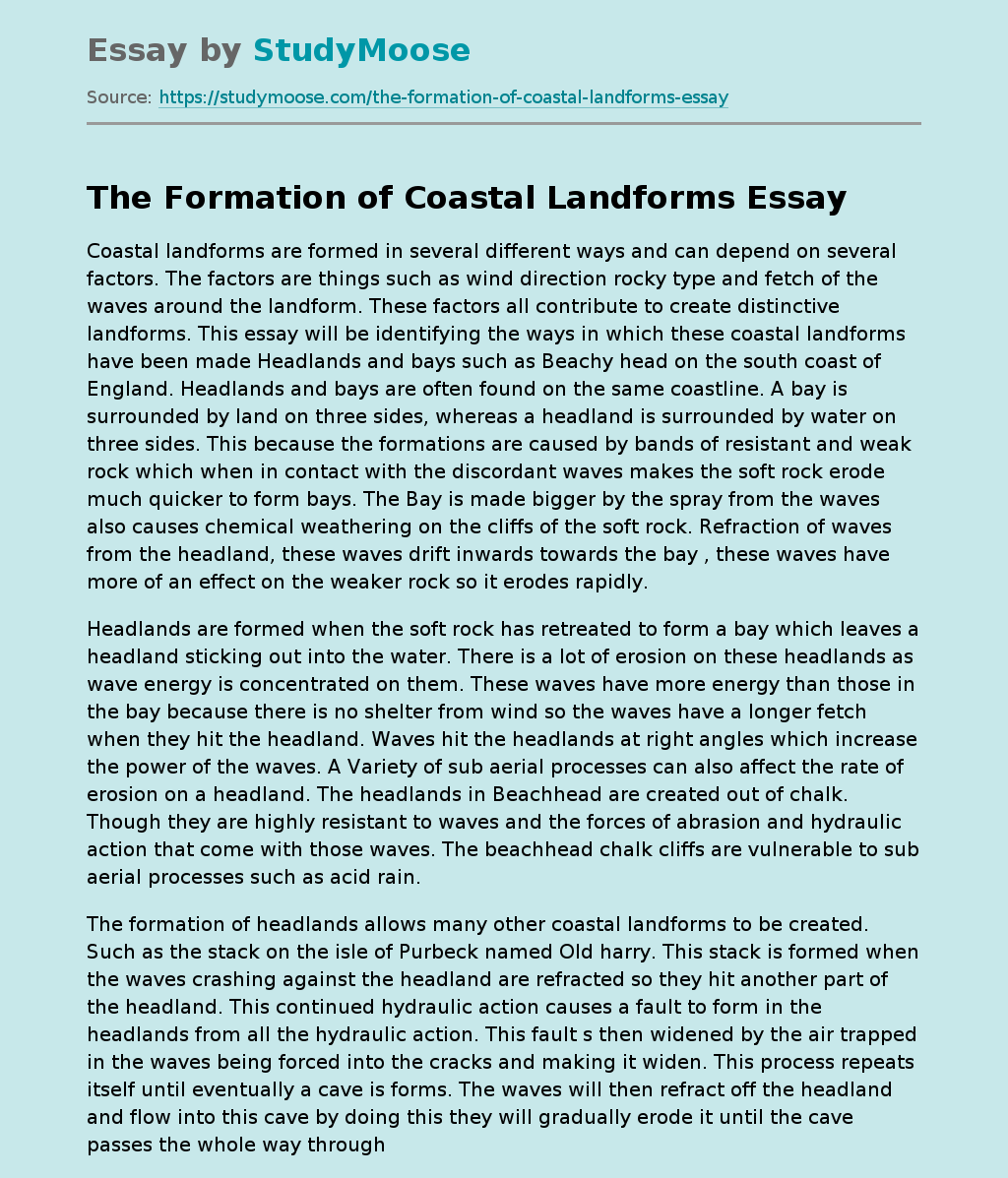