Some parts of the UK coastline have long attracted people; they have also attracted human interference. The only reason that coastal erosion becomes a problem is when human development is involved. Farmland is seen to be worthless in the eyes of the government, even though people’s livelihoods depend upon it. Farmers on the Holderness coast receive no compensation for the loss of farmland due to coastal management further up the coastline. The land is less valuable and the cost of management cannot be justified.

Don't use plagiarized sources. Get your custom essay on
“ Coastal management ”
Get custom paper
NEW! smart matching with writer

Where the management is being carried out is in areas of tourism and high population.

The areas need the money from tourism to retain their state of economic wealth so money from the government is poured into the area. In areas with housing on the coast, the housing has been labelled worthless as it becomes dangerous to live there and houses are at risk from plummeting into the sea. Furthermore, coastal management generally protects areas where developments such as power stations have been built on the coast as they are of great economic wealth.

When protecting these developments, the government totally disregard farmers who lose personal wealth due to their management schemes. This would explain why certain areas are given preference of management over others.

One example of a coastline with lots of coastal management is the East Sussex Coast, especially around Hastings. Coastal land uses in this area over the last 100 years has had a profound affect on this whole stretch of coastline. It has two fairly large coastal settlements, attracting a lot of tourists.

This has caused the local people to want hard engineered defences to protect their towns. There have been many changes to the coastline; the cliff face has been armoured and protected from the waves to prevent rock falls and cliff retreat. Groynes were built to the west to encourage the beach to accrete, or build up in the Victorian times. The harbour built in 1896 provides and effective sediment trap for long shore drift. This has had the benefit of creating a well built up beach, making hard engineering unnecessary. A ï¿½1,000,000 improvement and extension into the harbour was built in the 1970s, increasing the sediment trap effect. The town was built outwards over 150 years with the buildings, the promenade and the wide beach, as the whole sea front is artificial.

However these changes have been to the detriment of areas down drift. The cliffs of Fairlight have suffered extensive and rapid cliff retreat due to mass movement causing landslides and the abandonment of houses. Pett level is below sea level, many management strategies have been put into place but it is a question now of whether the benefits outweigh the costs and whether a managed retreat should be arranged.

One example of a coastline without coastal management but in great need of it is Bangladesh. A high proportion of its land is at or around sea level. The flat islands are ideal for rice growing, explaining why there are 40 million people living in the area. However, with previous storm surges drowning 40,000 people, killing crops and animals, coastal defences are needed. Unfortunately with Bangladesh being an LEDC it just does not have the funding and has to cope merely with soft engineering strategies of planting Mangrove trees. Other particularly densely populated parts of the world are at risk; regions like the Nile in Egypt, and the Ganges in Bangladesh. These are LEDC’s who are unable to afford the kind of coastal protection they wish, however the Maas in the Netherlands already has many coastal defences in place showing great effectiveness.

Coastlines attract more management than others depending on a variety of variables; the human influence on the area, the affect that waves have on the area and the environmental significance of the area. If, in one certain area, one of these criteria does not have the same level of importance as another area, then the latter should be favoured. This may not always be the case, however, as certain parts of the coast have a far greater influence on governmental policy than others, and if the area can afford to have a management scheme in place, then this throws the theory that coastlines are managed simply on their state of being. 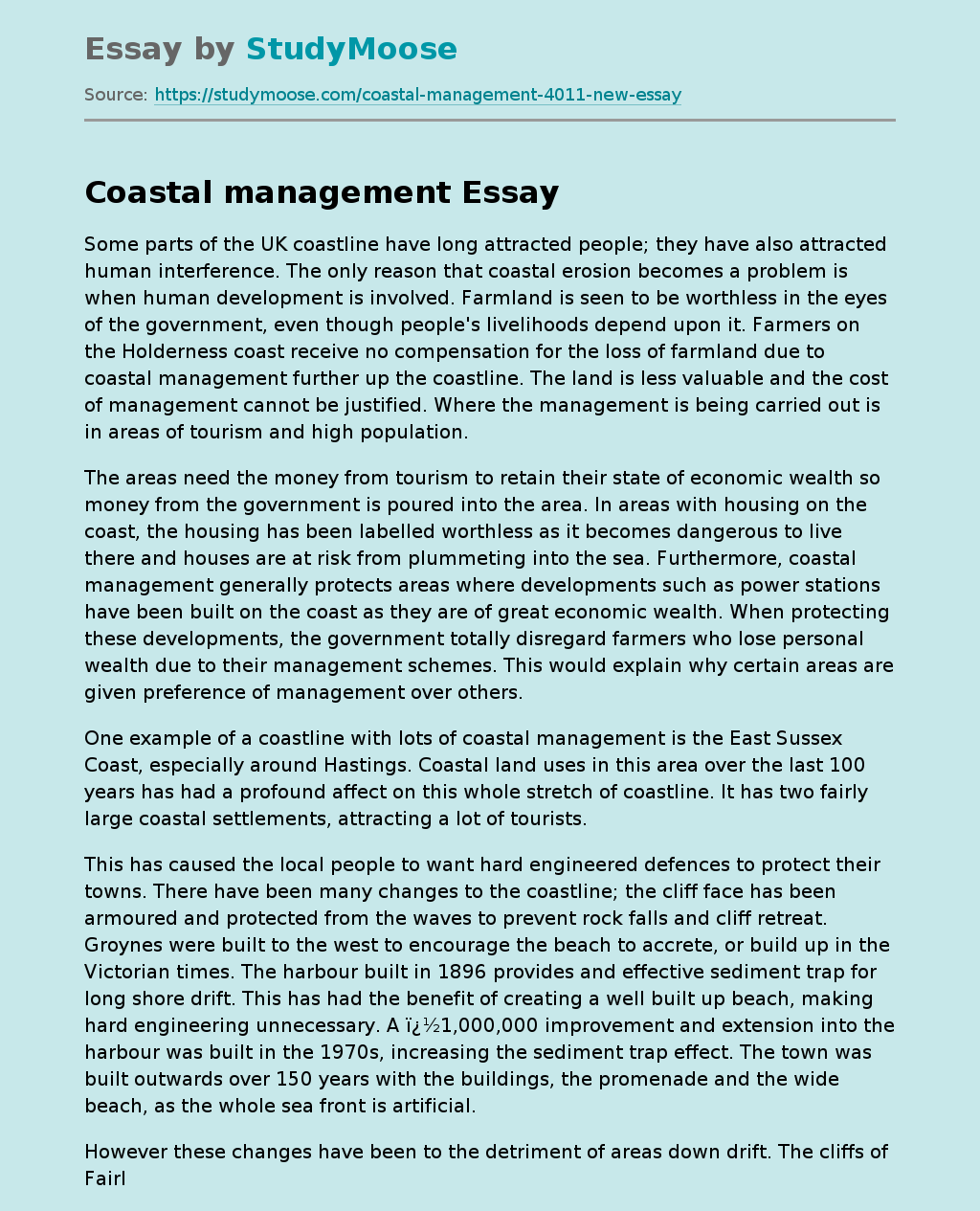