Life and Death Issues in Mayday on Holderness

In the poem, “Mayday on Holderness”, Ted Hughes analyses the relationship between man and nature. The theme of the second stanza is strongly focused on death, playing a part of the poem’s overall theme – the cycle of life. Another focus point of the stanza is the eternal being of nature and man’s need for it. Hughes picks up on the inferiority of mankind in comparison to “unkillable” nature. Hughes conveys the idea that nature is immortal and lives off our deads’ remains, we see this through the listing of “tributary graves” being part of what the North Sea “swallows”.

Don't use plagiarized sources. Get your custom essay on
“ Life and Death Issues in Mayday on Holderness ”
Get custom paper
NEW! smart matching with writer

This imagery is morbid and voices Hughes’ anti-pastoral feeling. He uses this poem to establish that nature is not clean, pure and innocent but instead has been dirtied and thrives off our dead and waste. Nature has destructive power as well as creative power. The river Humber that Hughes describes in this stanza is depicted as “a loaded single vein”.

The use of this metaphor and comparison to a “vein” infer that the river is living, as veins are needed by the body to pump blood around and keep us alive.

Leading us to label the river as the blood and the country as the flesh. This metaphor consequently conveying that the people of the North rely on the river, and as a whole rely on nature, to keep them alive. However, Hughes tells us that the river contains human remains; the river therefore is not only a symbol of life but also of death.

This reflects the overall theme of the poem: life cycles. Hughes emphasises the density of death that is contained in the river through describing it as “loaded”.

This adjective portraying that the river is so full up to the point that it is on the verge of exploding. In addition, the assonance of ‘i’ in the third line of the stanza mimics the flowing movement of the river Humber as it travels out of Hull to join the North Sea. This is also emphasised in many lines of the stanza through sibilance. Notably, for example, in the first two lines “sunset smudge” and “south skyline” share the hissing sound of the river’s water.

Returning to the message Hughes is making about man’s subconscious need and reliance on nature, the imagery of the river as it “drains the effort of the inert North – Sheffield’s ores” reflects this. The point being made is that mankind focus their energy and time into manufacturing and industry (Sheffield being known for it’s steel production), turning them into lifeless, sluggish beings. Yet, we need nature to keep everything in equilibrium and without it we would not survive.

The river is accepting and making use of what humans discard or have no use for, for example, the river swallows up all: “bog pools, dregs of toadstools”. The way Hughes calls the river Humber “Sheffield’s ores” is another reference to the importance of industry and also that nature is used by mankind in the same way Sheffield uses ores; for it’s important elements. We take nature for granted. The idea of nature being engulfed and overlooked by a world of manufacturing is inferred through the description of the river “melting”.

This verb seems an unusual one to use and Hughes has selected it for it’s industrial connotations. As I previously mentioned, Hughes voices his anti-pastoral feeling in this poem. A filthy, more negative portrayal of nature is articulated. It appears that nature has had its purity removed, or it never existed. Hughes describes Hull’s “sunset smudge”. The connotations of “sunset” are romantic, peaceful and naturally beautiful. The juxtaposition of these two words creates severe contrast, as the word “smudge” is onomatopoeic, with a dirty, unclean sound created by the “sm” and thickness heard in the “d”.

The last line of the stanza once again enforces the idea that nature has the ultimate power over all creatures on earth. “Insects, drunken, drop out of the air. ” This imagery shows authority, as though the insects are falling at nature’s feet. In such a way that one would fall in front of their leader. It also expresses the idea that the insects are dropping death into the river after being poisoned by the river’s fumes. Which is another way that illustrates nature’s ultimate power and also the sense of nature’s destructive power.

Life and Death Issues in Mayday on Holderness. (2017, Feb 05). Retrieved from https://studymoose.com/life-and-death-issues-in-mayday-on-holderness-essay 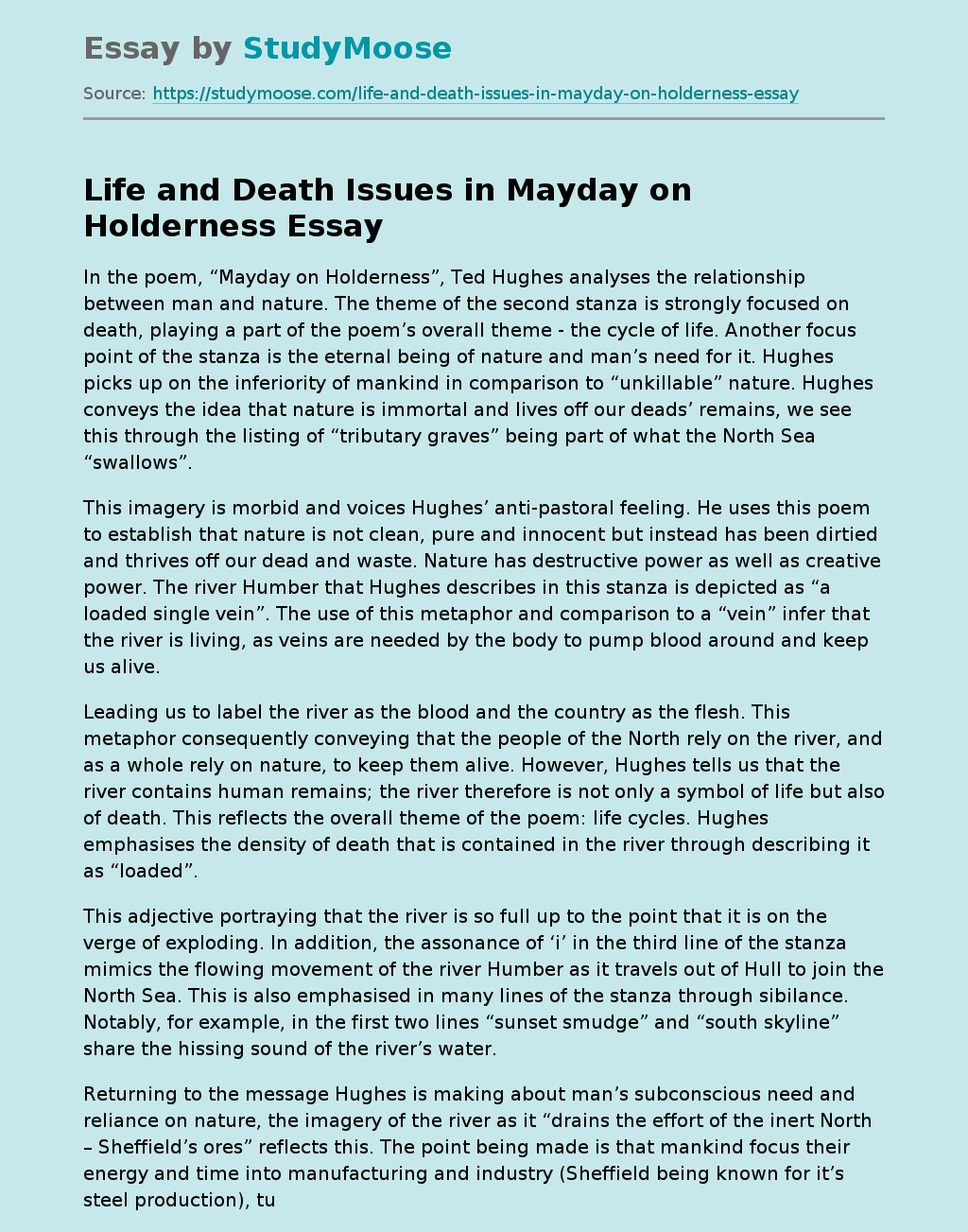