The Significance of Life and the Struggle Against Death in The Death of the Moth, an Essay by Virginia Woolf

Life and death, the two great forces of nature, regulate and are essential to the very concept of existence. Yet, is there significance to life if it will end inevitably in death? In her autobiographical essay “The Death of the Moth,” Woolf utilizes pathos, personification, and symbolism to frame her argument that life is undeniably weak in the face of death yet struggle against death is necessary in order to accept life’s termination. However, analysis of Woolf’s argument reveals minimal logos, subjective personification, and potentially unrepresentative symbolism, indicating that while life does inevitably end in death, life’s unceasing existence represents its power.

Don't use plagiarized sources. Get your custom essay on
“ The Significance of Life and the Struggle Against Death in The Death of the Moth, an Essay by Virginia Woolf ”
Get custom paper
NEW! smart matching with writer

“The Death of the Moth” follows the short life of a day-moth as a simple representation of the dynamic between life and death. The story starts by detailing the beautiful landscape in mid-September , with specific focus on the free movement of the birds (Woolf 575). This imagery of birds is juxtaposed with the flying pattern of the small day-moth in the room against the closed window.

The moth channels “pure” and vigorous energy into enjoying the nature outside as the birds are but is, in stark contrast, trapped (575). As the story progresses, it becomes evident that Woolf likens herself to the moth; both are trapped, the moth by the closed window and Woolf by her depression, and both are eventually taken over by death as seen from the moth’s death at the windowsill and Woolf’s suicide in River Ouse (Panthea).

Woolf’s essay relies heavily on pathos to evoke emotions of pity and sadness, associating them with the fragility of life.

Since the moth’s struggles reflect many of her own struggles against depression, Woolf reflects her emotions into her text. Her fatalistic approach to the essay, published a year after her death, results from her loss of confidence in life, subsequently leading to suicide. Woolf relies strongly on emotional description when she describes the moth’s “futile attempts” to resume flying around a room he will never escape and his eventual “helplessness of… attitude” (576). The emotional description enhances the rhetoric of life’s frail nature and emphasizes the helplessness of life, establishing a hierarchy with death stronger than life. The consistent repetition of Woolf’s belief in life’s weakness offers clarity to her argument so that readers finish the essay with a clear understanding of her stance.

Approaching the nature of life and death from a logical standpoint reveals, however, that life may not be as weak as Woolf portrays it to be. Essentially, the dynamic of life reflects the question: “What would you do if you knew you could not succeed?” Fear of failure in human nature often leads to avoidance of whatever situation eludes success, yet life on Earth has not ceased to continue. In fact, the world’s population continues to grow, indicating that life has not fallen to inevitable death; although life is destined to fail in its very identity because of eventual death, it does not cede to the pressures against continuation. Furthermore, the hierarchy that Woolf creates with death above life is opposed because the two forces equally balance each other. Without death, life simply cannot keep existing due to the carrying capacity of earth and without life, there is no death. This outlook portrays life as a force just as strong as death, both necessary to the workings of continued life. Woolf’s fatalistic view of life narrows her perspective and her argument is based more upon strong emotion rather than logical sense.

Stemming off of Woolf’s incorporation of pathos is her personification of the moth’s desires, which makes the scenes more vivid and ties them closely with her central argument. Woolf’s personification of the moth starts early in her essay when she describes the moth’s vigorous flight as “his zest in enjoying his meager opportunities to the full” (575). Woolf describes this zest as pathetic, knowing that the moth will not have much longer to live and pities his effort to enjoy the final moments. As the moth approaches death, Woolf portrays his failure to again take flight and the “helplessness of his attitude” (576). She ends the essay by attributing her own beliefs to the moth when she writes “O yes, [the moth] seemed to say, death is stronger than I am” (577).

For example, while Woolf portrays the moth’s vigorous flight as a pitiful attempt to enjoy the outside world despite his trapped state, the moth’s enthusiasm could be interpreted by a different writer as the opposite: he has just successfully escaped a dangerous situation outside and flies around in excitement due to safety in the house. Woolf’s interpretation of the moth’s final acknowledgement of death’s power also falls victim to author subjectivity, because the moth may be thinking of how satisfied he is with his life. As a result, although subjectivity is an integral and inevitable part of writing due to varying perspectives, the multitude of other possible interpretations for the moth’s emotions creates different messages.

In essence, the author is able to selectively personify the moth’s emotions in the way that enhances her argument best; if Woolf chooses to advance a different argument, her use of personification will likely adjust to her new argument. She bases her argument on subjective personification through projection of her own emotions onto the moth which begs the question of whether this representation is truly credible. Since Woolf projects her emotions onto the moth throughout her essay with heavy personification, she utilizes the moth to symbolize life, specifically her own. After the death of her mother and father, Woolf sank into periods of depression and nervous breakdowns (Panthea). Throughout her life, Woolf suffered from deeper anxiety and depression with her increasing belief in self-failure and with multiple deaths of the people close to her (Panthea). Her mental state oscillated between precarious to safe with the traumatic events and her continuous struggles against mania and depression (Panthea).

In this way, Woolf portrays her mental entrapment by her illness as the physical entrapment of the moth by the house and closed window. Her struggles to continue living despite her mental state are subsequently reflected in the moth’s attempt to enjoy life even though he is blocked from freedom in nature. The moth’s acceptance of death in the end foreshadows Woolf’s acceptance of her own impending death, which she embraces through suicide in the River Ouse (Panthea). The moth’s short life succinctly symbolizes Woolf’s life of struggles and portrays her belief that she has faced enough struggle against death to welcome it uncomplainingly. She concludes her story and thereby her life in a complacent tone, which she symbolizes with the moth’s final upright pose, because her struggles have been enough and no amount of struggle will allow life to elude death.

While Woolf’s utilization of symbolism allows her to convey her argument through an autobiographical narrative, the moth’s life is vastly different from hers and is therefore potentially unrepresentative with respect to her argument. In other words, although the symbolism is rightfully subjective as Woolf’s narration is tied to her emotions, it is not effective in advancing her argument without further clarification. The moth’s life is much shorter in comparison to Woolf’s life: one day versus almost sixty years. Therefore, while it is easy to view one-day as an insignificant lifespan from the point of view of a human life, it is often different to discuss a life that spans close to six decades.

If Woolf is comparing life to the general existence of life on earth, then her argument in claiming life’s insignificance rings slightly more true because sixty years is but a tiny fraction on overall life. However, this outlook that all life is insignificant in the grand scheme may similarly portray death, the coexisting force, as insignificant. Since neither force is deemed significant with this perspective, Woolf’s argument is not supported. The significance of something depends heavily on the perspective through which it is viewed and Woolf’s argument can be made stronger by clarification of why the moth’s insignificant life accurately symbolizes her own.

Therefore, while Woolf skillfully incorporates her autobiography into her narrative of the moth’s life, her preference of pathos over logos, subjective personification, and potentially unrepresentative symbolism cloud her argument that life is insignificant when opposed by death. While it is reasonable to explore the dynamic between life and death, a longstanding exploration, her heavily fatalistic approach to life reveals loopholes in her argument. Heightened personal emotion discredits her argument, which requires further clarification to be truly argumentative. Although subjectivity is a key nature of writing, some level of objectivity may be required to make an argument more universally valid.

The Significance of Life and the Struggle Against Death in The Death of the Moth, an Essay by Virginia Woolf. (2021, Sep 24). Retrieved from https://studymoose.com/the-significance-of-life-and-the-struggle-against-death-in-the-death-of-the-moth-an-essay-by-virginia-woolf-essay 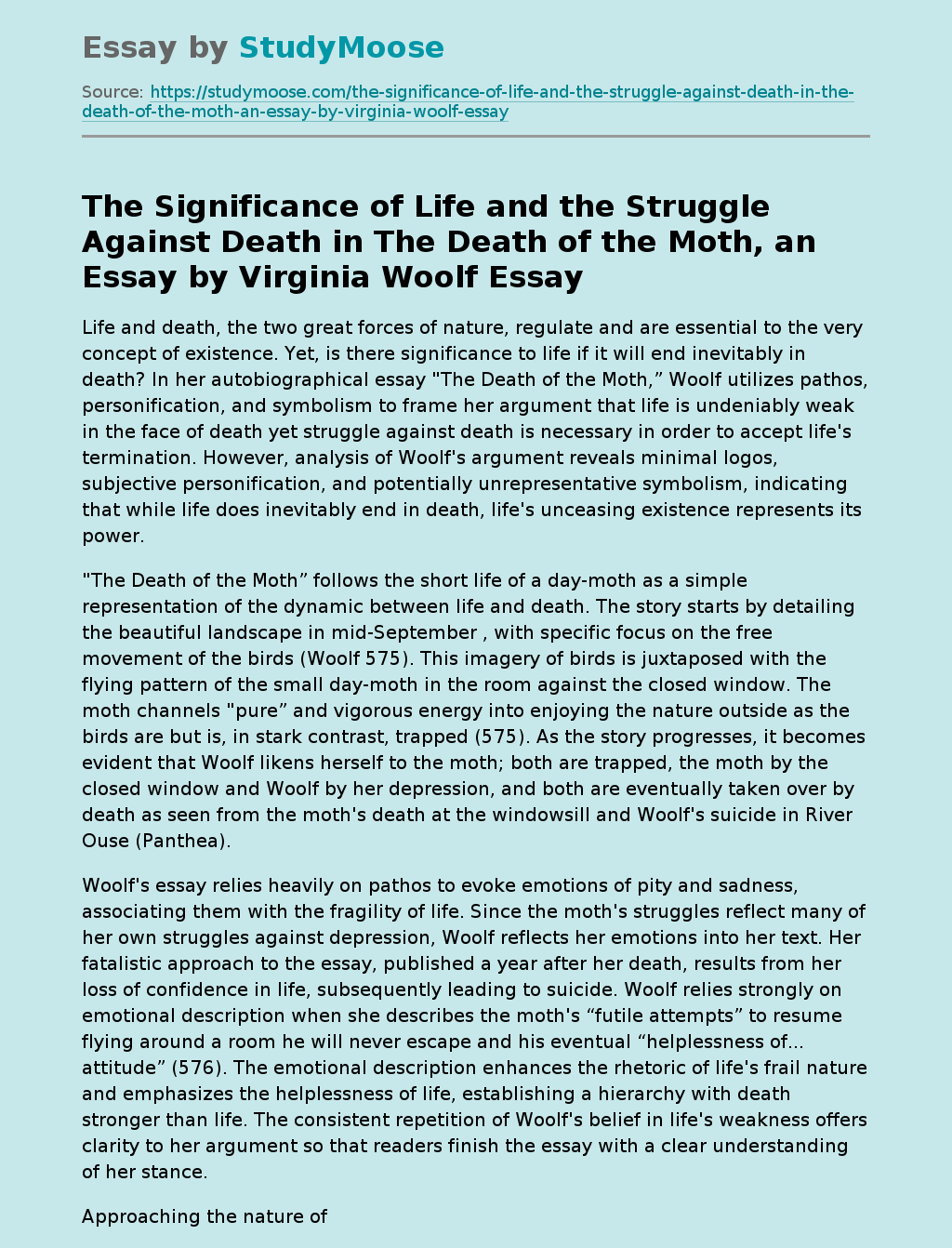