Analysis on death of the moth by Virginia Woolf

The passage “The Death of the Moth” has been excerpted from Virginia Woolf’s (1882-1941) collection of essays and published one year after her death. Throughout this particular passage, she symbolizes a moth and its insignificance yet contribution to nature, along with her views on life and death. She skillfully elaborates about this moth, providing information that reveals it is much more noteworthy than it is treated. She begins her writing with a general idea of moths, and although the sentence “they are hybrid creatures, neither gay like butterflies nor somber like their own” is written in a factual manner, it is actually not a fact; it is her method of expressing that moths are unique individuals, not completely like butterflies and not completely like their own kind.

Don't use plagiarized sources. Get your custom essay on
“ Analysis on death of the moth by Virginia Woolf ”
Get custom paper
NEW! smart matching with writer

Virginia’s purpose of displaying it in this factually manner is to verify the strength of her belief in this phrase. The moth was trapped and put so much effort into retrieving its freedom that she felt a slight sense of pity for the trapped moth.

Nevertheless, she still watches it without reacting to aid it. As she watches it, she realizes the moth has not given up yet, as if it has plenty to strive for. Woolf describes the moth as “pathetic”, since it was battling against the inevitable and was in pain because of the profound effort that seemed unworthy in her eyes.

We see that with numeral examples from this essay, Virginia carefully chooses her style of writing and literary devices to make her writing effective, detailed, and emotionally expressive.

It is difficult to understand what exactly motivates her to write like this, and how exactly it reflects her reason for suicide, but there are still many interpretations. She did, however, persistently mention her fascination by the creature, as it had so much determination to live, thrusting its body uneasily, attempting to save itself.

The moth seemed to have a dignity that it was holding on to, as it fought vigorously to live. Personally, I think this is the reason people find her motive to voluntarily give up her own life to be extremely ambiguous. The message Woolf is trying to convey to the reader is that one must give in to death, as it is part of the life cycle.

One needs to give in to the inevitable, as all beings will die and it is only a matter of time. Even though this particular moth used to be pathetic in her perspective, Virginia now watched it as if it were a renowned masterpiece. The moth had transformed into becoming a truly magnificent creature in her eyes; thus her use of paradox is meant to keep us thinking and wondering. For sixty years now, students and professors of the English language have been studying her rhetorical modes, in hopes of bringing out the true meaning behind her literature.

Analysis on death of the moth by Virginia Woolf. (2016, May 12). Retrieved from https://studymoose.com/analysis-on-death-of-the-moth-by-virginia-woolf-essay 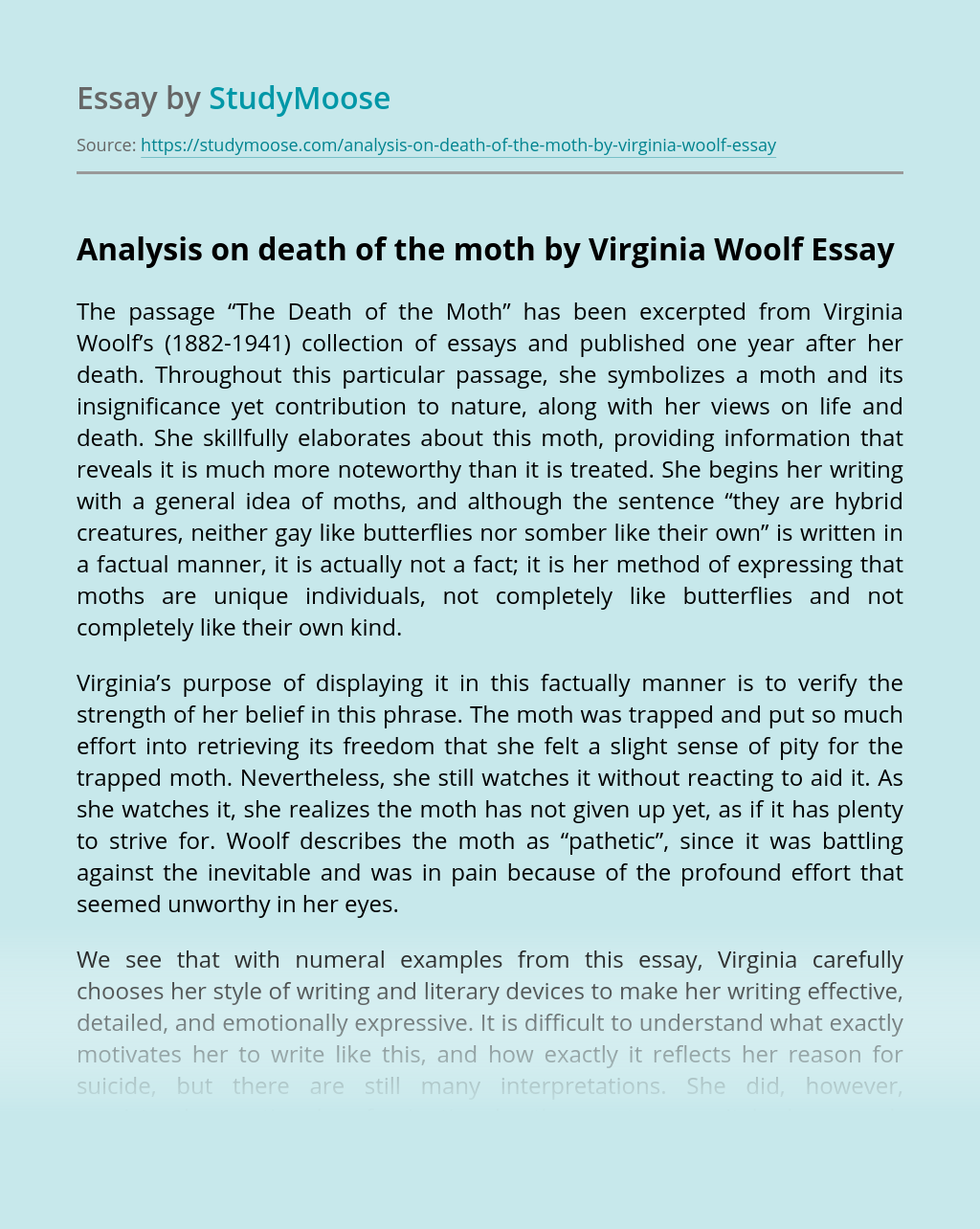