Virginia Woolf is regarded to be a modern literary figure. She was an English novelist and essayist who was a significant icon in London literary society. She was a member of the Bloomsbury group. Her famous novels are “Mrs. Dalloway”, “To The Lighthouse” and “Orlando” and the essay “A Room of One’s Own. ” Contemporary feminists regard Woolf as an advocate of the movement. This paper will analyze Woolf’s background and some of her works to bring up points of her beliefs on the matter.

Don't use plagiarized sources. Get your custom essay on
“ Feminism in Virginia Woolf ”
Get custom paper
NEW! smart matching with writer

Growing up in London, Woolf was influenced by a wide circle of Victorian society. Her father, Sir Leslie Stephen was an editor, critic and biographer.

He had conections to numerous British writers including William Thackeray. Novelists such as George Elliot, Henry James, Julia Margaret Cameron, George Henry Lewes and James Russell Lowell often dropped by in their house. (Maze, 18, 1995) Woolf and her sister Vanessa were sexually abused by their half-brothers Gerald and George. According to modern scholars, this traumatizing experience triggered her nervous breakdowns.

The deaths of her mother Julia Prinsep Stephen in 1895, her half-sister Stella in 1897 and her father in 1904 added salt to the wound. Woolf was institutionalized after her most alarming breakdown.

(Maze, 20, 1995) Despite her mood swings, mental breakdowns and decline in social functioning, Woolf’s abilities to write remained. Biographers claim that Woolf’s marriage to Leonard Woolf was not consummated. According to them, she was a lesbian. Nonetheless, the couple had a tight relationship and often collaborated in the literature industry.

Leonard Woolf was the publisher while Virginia Woolf was the writer. Hogarth Press published a majority of Woolf’s works. (Maze, 23, 1995) Woolf had a relationship with Vita Sackville West, an English poet and novelist. Their affair lasted for two years but thry remained friends.

Other relationships with women were Madge Vaughn (the inspiration for “Mrs. Dalloway) and Violet Dickinson, a composer. There were also debates on whether Vanessa and Virginia also had an intimate and incestuous relationships or they were just close. (Maze, 24, 1995) Modern science explains Woolf’s disorder as a case of bipolar personality. On the verge of another nervous breakdown, Woolf commited suicide by drowning herself in the River Ouse. (Bowlby, 32, 1989) Students concentrating on Woolf and her works often analyze the lesbian and feminist themes in her novels, essays and short stories.

For example, “A Room of One’s Own” discusses the difficulty female intellectuals and writers had to go through a time when men had more economic and legal power. What was instore for women in society and in education were unknown. This work exploited the obstacles, challenges and the anxieties of Woolf and other women writers during the 1930s. (Bowlby, 35, 1989) Women writers were afraid to write what they believed to be the “truth” because they were afraid that the academic world, which was made up by a majority of men, would disclaim their writings and describe it as mere opinions.

A major problem of women writers in that decade was that tehyw ere not taken seriously. There was a disparity between male and female writers. The latter was said to be inferior. (Bowlby, 29, 1989). Woolf was a woman ahead of her time. One of the points she wanted to present was that a woman could be more than a housewife. She elaborated this by writing that women could perform the conventional duties in the household and have a career, in her case, an author, at the same time. She compared women who wait for the men to come home after work as objects, simply because they meet was was expected of them. (Lounsberry, 3, 1998)

“Mrs. Dalloway” discussed themes on madness and feminism through two characters – Clarissa Dalloway and Septimus Warren Smith. Clarissa represents economic and sexual repression whereas Septimus is the remedy to depression and insanity. Septimus’ suicide was an allusion to Woolf’s constant struggle with manic depression. Like the character, Woolf also hallucinated that the birdes were singing Greek. There was also an instance when Woolf tried to throw herself out of the window, the exact same way she wrote Septimus’ death. “Mrs. Dalloway” also touched bisexuality through Sally Seton, Clarissa’s partner.

(Lotz, 26, 2003) “To The Lighthouse” presented a new method on understanding thoughts. This is Woolf’s masterpiece and one of her best autobiographies. She suggested that by understanding thoughts, the writer must spend a good amount of time listening to her thoughts and studying how her words and her emotions affect her mind with what she saw. (Lotz, 27, 2003) In order to look into Woolf’s take on feminism and gender equality closer, scholars carefully analyze Woolf’s influential novel “Orlando. ” This is a semi-biographical novel that was inspired by Woolf’s passionate relations with Sackville-West.

It is the story of Orlando, a young English man who didn’t want to grow old. One day, he woke up and realized that he was turned into a woman. He still had the same intellect and same personality but he had a woman’s body. (Lotz, 28, 2003) Through this work, Woolf wrote a semi-autobiography that presented lesbian love to its readers. Because of the delicate subject matter, “Orlando” was banned in the United Kingdom. Also, “Orlando” started the trend of the non-fiction genre in literature. The novel is both transgender and transgenre. (Lotz, 29, 2003) Woolf is the first activist who vied for woman’s suffrage.

Through her works, she changed the views and ideologies of women writers. Because of her, women were no longer annonymous. Most importantly, they were noticed and their works were regarded to be as the same level as those of male writers. (Lounsberry, 4, 1998) She set the groundwork for transformative social changes. Her beliefs which she wrote from 1920s to 1940 clearly indicated a movement that was heading toward the direction for women’s suffrage rights. Woolf’s writings on feminisms as indicated in her public letters and “A Society” assessed the development of the feminist subversion by male scholars.

(Lounsberry, 5, 1998) “Three Guineas” is Woolf’s essay that has the most explicit and clear statement on feminism. It provides a meticulous and well-researched observation on the subject matter. Woolf also presented her relations with different women’s organizations which share her agenda. (Lotz, 30, 2003) This is Woolf’s feminist work that is uncompromising. She assaults the domination and privilege of men toward women. The details that are elaborated and sustained from beginning to end argue that women are still capable of maintaining a fervid argument which is relevant for feminism then and now.

Woolf might have neglected class and sexuality in some of her feminist works because this was a problem during her time. However, she does her best to present to her readers her objectives on why she wrote her three guineas – which are democratization, education and public professional acivity. (Lotz, 31, 2003) By analyzing these three guineas and the possiblity of what can happen if a woman takes on the important roles that are associated to these, Woolf enriches the understanding of females everywhere. She takes into account the evolution and the development of feminism by combating the image that had been founded by males.

(Lotz, 32, 2003) Woolf’s creations are long, scholarly and complex but when read with a feminist perspective, these are impressive and takes the reader into the author’s personality, convictions and beliefs. If she were alive now, she would prefer to be called a humanist than a feminist. Simply because she was not obsessed with women, she was merely hoping that women would have the same rights, honors and privileges as of men. By compassionately exploring Woolf’s feminism, literary scholars poke into her sexuality and psychology that surround and precede in all her works. 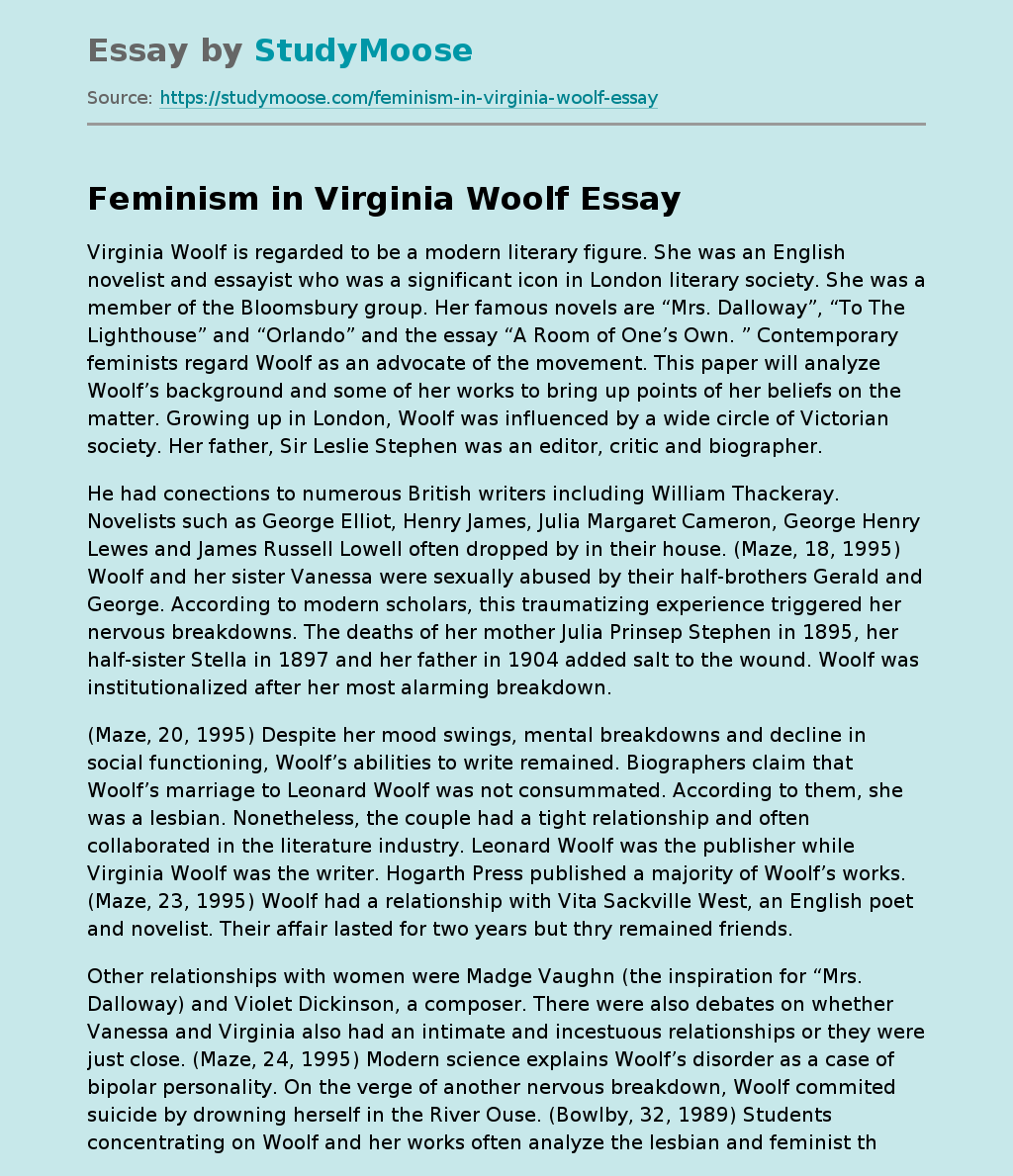