Compare and Contrast the characterization of Virginia Woolf’s Clarrisa Dalloway

Don't use plagiarized sources. Get your custom essay on
“ Compare and Contrast the characterization of Virginia Woolf’s Clarrisa Dalloway ”
Get custom paper
NEW! smart matching with writer

Young states, “The relationship between The Hours and Mrs. Dalloway is impossible to simplify;

Cunningham interweaves aspects of Woolf’s life, her novel, and her theories” (38). WWoolf and Cunningham describe the life a woman called Clarrisa on a single day in June. Both these women are hosting a party and have come out to buy flowers.

They happen to get a glimpse of a celebrity near the florist.

Their spouses, being invited by some famous personality, have gone out to dine without taking their wives. On their way home both meet an old friend accidently. But the two women belong to entirely different background and time period. While Mrs. Clarrisa Dalloway lives in 1923 London, Mrs. Clarrisa Vaugham lives in the modern day New York. Woolf represents the modernist society of 1920s in her novel, whereas Cunningham depicts the contemporary life style in The Hours. The protagonist of The Hours Clarrisa Vaugham shares her first name with Woolf’s Clarrisa Dalloway.

Though the characterization of Clarrisa Vaugham is different from Mrs.

Dalloway, the similarity in the first names does cause some ripples. But the names of other characters are not the same. For instance, in Mrs. Dalloway Clarrisa’s husband is Richard but Clarrisa Vaugham’s husband is not Richard. Sally is an important character who appears in both the fictions. While her relationship with Woolf’s Clarrisa is latent, Cunningham’s Clarrisa maintains a long-term lesbian relationship with Sally. Critics argue that Virginia Woolf is inclined towards homosexuality and therefore her Clarissa Dalloway expresses her secret homosexual interest in the novel.

Further Cunningham himself being a gay writer, has penned down his own experiences in the world through Clarrisa Vaugham’s lesbian relationship with Sally. Virginia’s society treated homosexuality as unnatural and perverted and therefore she did not write about it overtly. Loneliness is common to both Clarrisas. When Clarrisa Vaugham is invited for the party which her husband attends, she is utterly frustrated and states, “I am trivial, endlessly trivial” (94). Similarly, Clarrisa Dalloway is depressed when she comes to know that Lady Bruton has not extended an invitation to her.

Both these women represent the triviality of life. Both these women play the role of hostess to perfection and are interested in throwing parties that Peter Walsh remarks that Clarrisa is capable of only hosting parties and taking care of the household chores. Their lives are not essentially significant but they continue to live in the society. Clarrisa Dalloway and Clarrisa Vaugham are fascinated towards the ordinariness of everyday life. Cunningham’s Clarrisa does not have the quest to achieve lofty goals in life. She “simply enjoys without reason the houses, the church, the man and the dog.

It’s childish, she knows. It lacks edge” (12). Both Clarrisas are mature enough to understand that both ordinary and extraordinary are part of the world and have developed a fondness of an ordinary day in life. Clarrisas not only live with triviality and ordinariness but also with dissatisfaction towards life in general. The hollowness of human life and the masks worn by people to retain their false identity in the society is reflected through both the women characters and it is considered as a failure when the incidents around them do not take place as per heir plan and schedule.

While Clarrisa emphasizes on winning the literary prize, none is bothered to listen to her. But she treats it as a precious possession which should be well-guarded and does not take into account of how the rest of the world views it. But in spite of the dissatisfactions and failures, they continue to live with a hope and cherish the same hope throughout their life as they believe that such dissatisfactions and darkness reflect the true inner joy of life and society as a whole. The attitude of both the Clarrisas towards fame is almost similar.

Clarrisa Vaugham during her shopping at the florists, she wishes to guess the celebrity and with a child-like enthusiasm she waits for her appearance as she believes that movie actors represent eternity. Cunningham states, “Clarrisa stands guiltily, holding her flowers, hoping the star will show herself again, embarrassed by her own interest” (50). Clarrisa Dalloway is also inquisitive about the celebrity and by seeing the car she guesses the name of the actor. The communication between the characters is essentially strong in Cunningham’s fiction.

The characters for instance could discuss about homosexuality openly while some degree of discretion and secrecy has been maintained in Woolf’s version. Clarrisa and Sally for instance are “always generous with kisses” (89) though they do not express their love verbally. Sally sends Clarrisa roses to expresses her love similar to Richard who also is not able to express his love verbally. Clarrisa Vaugham also fails to express her love for her daughter Julia and is scared that she might lose her to someone.

Similarly Mrs. Clarrisa Dalloway is also afraid that she might lose her daughter and that insecurity turns into hatred towards Miss Kilman, the tutor of Julia. In Virginia Woolf’s novel, Elizabeth, daughter of Clarrisa Dalloway loathes the easy way of living of her mother and attaches herself with the feminist Doris Kilman. On the other hand, Julia, Clarrisa Vaugham’s daughter is in love with a New York lesbian by the name Mary Krull who is much older to her. Since Miss Kilman and Ms.

Mary Krull are non-conformists who challenge the restrictions imposed upon them by the society, both Clarrisa treat them as adversaries. On the whole, the niceties of Clarrisa Dalloway’s Bloomsbury style are completely out of way and Clarrisa Vaugham adopts the rigorous New York way of living. Cunningham’s Clarrisa is fiercely independent and looks into the future than the past. Happer states that Woolf’s Clarrisa “looks for the meaning of life primarily in the past” (112-113).

Clarrisa Vaugham has no dominant male in her life and in a way, it is remarked that the Cunningham has successfully helped Clarrisa to evolve and overcome the oppression that Woolf’s Clarrisa suffered from. Woolf has primarily focused on Mrs. Dalloway’s life. But Cunningham has extended the boundary and expressed the fact that love and hope are common to everyone in the society. To conclude the two women characters Woolf’s Clarrisa Dalloway and Cunningham’s Clarrisa Vaugham exercise a number of similarities as well as differences.

Cunningham’s Clarrisa is seen as an evolution of Woolf’s Clarrisa as she not only has imbibed the qualities of Mrs. Dalloway but also enriched the same and is appreciated for the fierce independence along with love and compassion for others. Works Cited: Cunningham, Michael. The Hours. London: Fourth Estate, 1999. Print. Happer, Howard. “Mrs. Dalloway. ” Between Language and Silence: The Novels of Virginia Woolf. Louisiana State: Baton Rouge, 1982. Print. Young, Tory. Michael Cunningham’s The Hours: A Reader’s Guide. New York: Continuum International Publishing Group, 2003. Print. 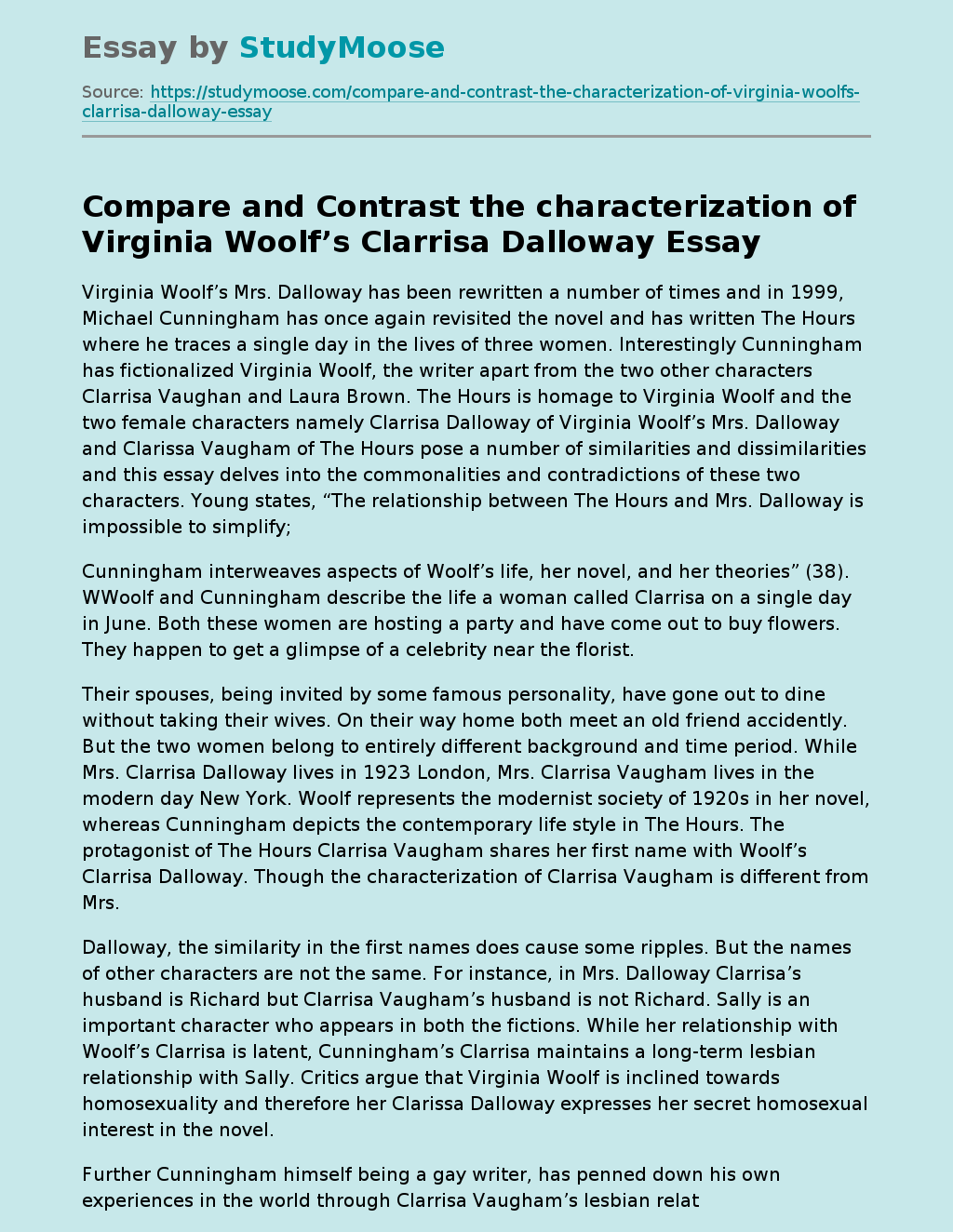