My personal beliefs have formed me over the course of my lifetime by many different influences. Many people have made important impact in my life that have changed my beliefs in society and my life. The major two values that help determine my worldview are God and Ethics they are the ways that help me shape my beliefs, and life decisions. I feel the strongest aspect of my worldview is my tremendous sense of spirituality and the relationship I have with God.

Don't use plagiarized sources. Get your custom essay on
“ Personal Worldview Inventory ”
Get custom paper
NEW! smart matching with writer

All of these beliefs help me every day with my decisions. The moral values I have learned are from many different influences through my lifetime. Strong Catholic influences have been the good foundation to be closer to God. I have learned to live a life of compassion, service and teaching. Ethical choices that I have made in my life have not been the most popular but they are the ones I live with.

One of my beliefs is that not all humans respond or act the same way.

It all depends on their world view, background, morals, and personalities. My main goal in life is to help others ever since I was a child. I was raised in a very religious catholic home. I was the middle child of five children in a Hispanic family. I grew up in a small Hispanic community near Mexico. As we were growing up we were exposed to people living in poverty and we were expected to help them with what we had.

Even though we were not a rich family we would give we would make the effort to donate food and the necessary items to the needy families.

We would donate dinners on Christmas Eve to the most unfortunate families with small children for the holiday. This tradition continues to be in my family and now my children are experiencing it. My mother and father have always taught us values and morals. I grew up with the belief to help out people in need. While I was growing up I wanted to be a Doctor or a nurse because my main objective was to help people in need. Now that I have accomplished my dream I am able to help people who are in need by caring for them.

What is prime reality?

One of the many definitions that describe Prime reality is “Prime reality is the infinite, personal God revealed in the Holy Scriptures. This God is triune, Transcendent, sovereign and good. (Sire, 2009). It is also describes God as being a supreme power. God cannot be compared with the study of Cosmos. Also the relationship that man has with God is extraordinary because man can trust God for any problems in life and relate with him in any personal way.

In religious pluralism defines Prime reality generally refers to the belief in two or more religious worldviews as being valid or acceptable. It is a multiple path that leads to the same God. Early as the seventeenth century the main concept was the religious working together. Even though Muslims and Christians believe in helping the most need both have different ideas and precept of God (Tripp, 2000). In Scientism the main concept of Prime reality is main goal is to extend to broaden scientific methods, to the life of humans in society and political issues. In post modernism the Prime reality the main concept is there main philosophy that states, “There is no absolute truth does not exist”. This leads to relativism which means that what is right for one group is not necessarly true for everyone in today’s society.

What is the nature of the worlds around us?

Nature can be interpreted as patterns of relationships. This is encouraged by the Buddhist belief that there is a interconnectedness of all things. This belief does not deny the reality of things that are typically perceived as being “in the objectively real world”, but it denies that these things have any ontologically isolated essence (Tripp, 2000). The basic idea is that there are no substantial or truly independent “essences” of things because the essence of any given thing consists in its interconnections with every other thing.

The “objectively real” world cannot exists without us, not because minds “create the world” but because the quality of our experiences and the things in the world that we typically call “objectively real” are ontologically interdependent. The ontological essence of each thing consists in its relations to all other things, thus nothing exists unless everything it is related to exists as well. External reality is the way God created the earth to work in uniformity and the earth was made out of nothing (Sire, 2009). In a scientism view it was the art of science that started the universe. Chemical reactions within the world is what started life in earth.

What is a human being?

What happens to a person at death?

Death is viewed as a gate to meet God and live an eternal life with him. Whatever happens at death is always a mystery. In much religious death once everyone dies they will face judgment by God (Noebel,2006). Death is not the end of life; it is the beginning of eternal existence. Postmodernism has no moral absolutes but rather places responsibility into the hands of the individual. Each absolute belongs into the hands of the individual and therefore each position on after afterlife is relative to an individual’s meaning of truth. In scientism death is viewed as the end of life and that a person is not passed to a better life. They also have the belief that near death experiences do not exist. Their only conclusion is that there s no scientific evidence that near death experiences are actual afterlife experiences.

Why is it possible to know anything at all?

Human beings are the images of God. God gave us the capacity to know and learn from his teachings. In postmodernism the truth about reality itself is forever hidden and no explanation. In scientism human reason & the methods of science the universe is responsible for knowing everything. Humans were created this way(Tripp,2009).

How do we know what is right or wrong?

We determine what is right or wrong based on our teachings from the bible and from the word of God. As we are growing up our parents are the ones who teach us the values and morals. The way they learned from their parents. It is guided by the teachings of the bible. In scientism right and wrong are what we decide for our ourselves as humans it may be individually, or families. In postmodernism each person or culture develop their own moral values. It also depends how each individual is raised. They sometimes ask each other is that right for me? How will this help me? Also our actions are determined by our responsibilities as human beings.

What is the meaning of human history?

The meaning of history for people who follow a certain religion is creation, fall and redemption. God is wonderful and has a plan for everyone. God is in total control of the world. The main purpose of God was to create man and have a good relationship with him. God gave us the tools to follow him and if we commit sin God is always willing to forgive us. In postmodernism their belief is that human history is the study of one’s culture over another. It is main concept is relative, the postmodernist will be will to rewrite history to try to convince other in believing what is better for them. In scientism history has no purpose. Also they believe that someday the plant will freeze up or burn and will be the end of life.

All human beings have a purpose in life, regardless of their worldview. We should respect them and love them the way they are. Sometimes they will learn from each other and obtain the positive beliefs from each other. A good paper, Shirley. I would like to have seen you give more attention and analysis to pluralism, scientism and postmodernism. Still, this is a good paper. 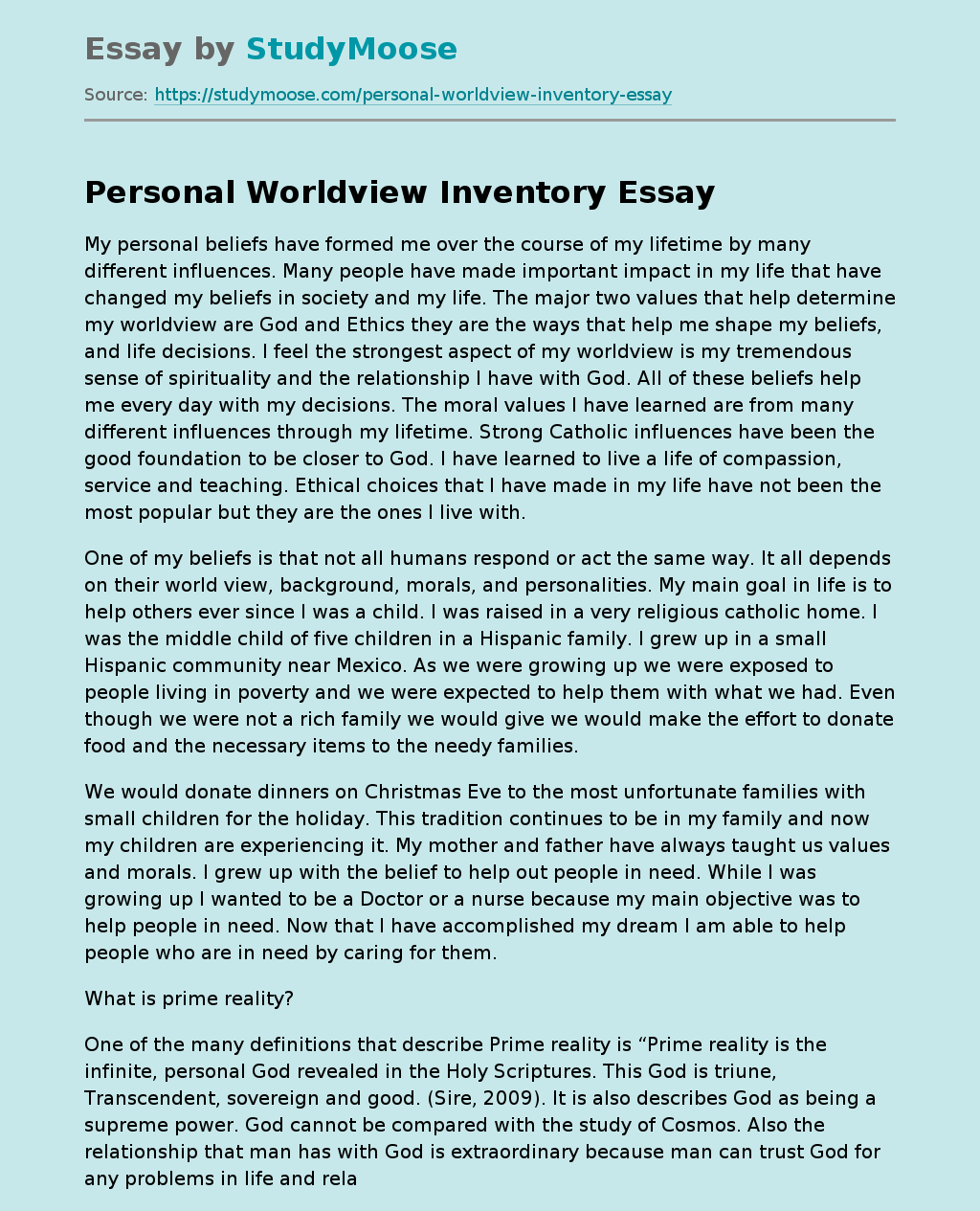