At the end of the 19th century, Western world outlook was turning from rationalistic, philosophical systems that asserted faith in the power and triumph of a person’s thought to the opportunity of recognizing the world in the progress of mankind to philosophical systems that denied rationalism and the possibility of knowing the world, which denied the progress of society and a person. The expression of this turn was the world outlook of Nietzsche.
He is one of the most brilliant European thinkers-contemporaries.

Nietzsche founded the direction of rethinking life, in which it was proclaimed an indisputable value, a reality that one should comprehend. His name is known all over the world. His ideas are full of tough criticism and nihilism. This thinker was multilateral; his works can be divided into several ideas, the main of which are the volition to authority, the death of God, nihilism, change of the worldview and the Superman. This MLA paper deals with these notions.

Nietzsche’s world outlook briefly mentions theories that are the soil for his reflections, such as Darwin’s theory and Schopenhauer’s thoughts. In his reflections, he ruthlessly criticizes them. Nevertheless, the natural selection and struggle for survival, in which the strongest survive, led to the thinker’s desire to create a certain ideal of a person.

One of the main ideas of his works is the volition to authority. The will for the thinker was the foundation of the world, which consists of accidents and is filled with chaos and disorder.

He strives for power and domination. This was his main life goal, the meaning of existence. His main achievement is the idea of creating the Superman.
The world outlook of life also occupies a great place. The thinker believes that life is a separate and unique reality for every person. He does not identify the concepts of mind and life and severely criticizes the expressions and teachings concerning thoughts as an indicator of the existence of a person. Nietzsche represents life as a constant struggle. Therefore the main quality of man in it is the will.

The Supermen is the key point in his worldview. His ideal man destroys all norms and ideas and rules put to people because this is just a fiction, imposed by Christianity. Christianity itself is considered by the thinker as an instrument of planting people with qualities that make strong people weak, create slave thinking. In this case, religion idealizes the weak people. In ethical matters, Nietzsche takes the position of nihilism. Morality acts as a corrupting element of culture; it is obedience, the instinct of the crowd. At the heart of the “morality of gentlemen” lie the following provisions: the value of life, understood as “the volition to authority”; natural inequality of people, which relies on differences in life forces and “volition to authority.” A strong person is not bound by any moral standards.

The subject of morality is the Superman as a certain type of people, and also as the supreme biological type that relates to a person in the same respect as a human refers to a monkey. The Superman is transformed into the cult of personality. Nietzsche, although he sees his ideal of man in some outstanding personalities of the past, still views them as the prototype of the future Superman, who should appear.

His works briefly illuminate the problems of being. He believes that one can not oppose the truth and the empirical. Negation of the reality of the world contributes to the denial of the reality of human life. He argues that there is no absolute being, and it could not be. There is only a cycle of life, a constant repetition of what has already happened. 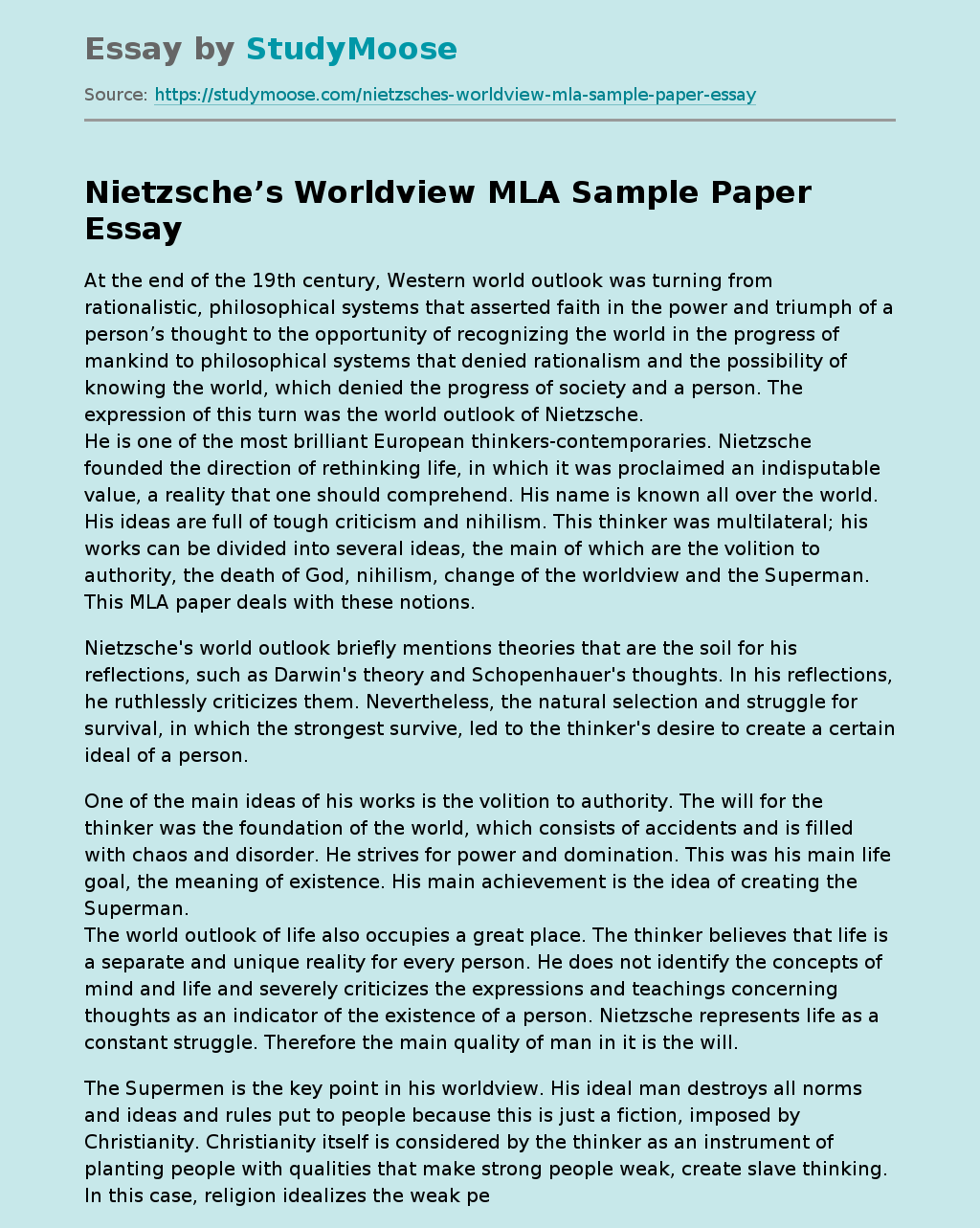