A Critical Review of The Metamorphosis

In The Metamorphosis, Franz Kafka tells a very odd story of a man who turns into a bug. He presents this story in the form of a narrative that is told in the third person where he shares his story of a man who was just a regular travel salesman who one day turned into a bug. This paper will review Kafka’s story as well as his main arguments and will evaluate the quality of Kafka’s writing and focus on any areas of weakness within the story.

Don't use plagiarized sources. Get your custom essay on
“ A Critical Review of The Metamorphosis ”
Get custom paper
NEW! smart matching with writer

This section contains a summary of The Metamorphosis. Kafka begins his book by introducing the main character Gregor Samsa waking up from unsettling dreams (3). This is where Kafka explains that Mr. Samsa has turned into a bug. “He found himself changed in his bed into a monstrous vermin” (3). Kafka’s purpose of writing this book was to create an odd twist for readers to enjoy and it was a fictional narrative about him and his family.

“The whole family constellation, father, mother, and sister imagoes, are equally transformed in the intrapsychic action” (153). Kafka then goes on to describe the life of Mr. Samsa and how his metamorphosis has changed his life.

After finding out that he was turned into an insect Samsa seems to not be bothered by his current state. He tries to roll over to fall back to sleep hoping he can forget about it but is unable to. “How about going back to sleep for a few minutes and forgetting all this nonsense”…“he was used to sleeping on his right side and in his present state could not get into that position” (3).

The only thing Samsa is worried about is losing his job, his physical comfort, and his family’s financial situation. Samsa is a traveling salesman who takes his job very seriously because it’s what is paying off his family’s debt from his boss. Samsa ends up not being at work and would later never go back because of his current situation. Samsa’s family has no clue what to do with him and his little sister is who takes care of him. “He would have never been able to guess what his sister, in the goodness of her heart, actually did” (22-23). After more than half a year Samsa is still an insect and has stayed in his room. Close to the end of the book Samsa’s health is deteriorating because his father threw countless apples towards him in anger “He had filled his pockets from the fruit bowl on the buffet and was now pitching one apple after another” (37). One of these apples impaled Samsa in the back and he could not get it removed and his family would not take any part in removing the apple. This is what lead to Samsa’s end. After Samsa died his family decided they were going to turn their lives around completely. This is when they decided to move into a smaller apartment.

As described above, Kafka’s main purpose for writing this story is to create an odd twist for readers to enjoy and it was a fictional narrative about him and his family. There is three different themes that go along with this story including, the absurdity of life, the disconnection between mind and body, and the limits of sympathy. These themes were based on the actions of his family and Gregor Samsa himself.

For example, the first theme, the absurdity of life includes at the beginning of the book a part that deals with an absurd, or wildly irrational, event, which in itself suggests that the story operates in a random, chaotic universe. This is where Samsa turns into an insect. Another thing that is included in this theme is all the members of the Samsa family treat the event as a random occurrence. The characters are unusually calm and unquestioning, and most don’t act particularly surprised by the event. The second theme, the disconnection between mind and body started with Samsa’s transformation completely altering his outward appearance, but it leaves his mind unchanged, creating a lack of harmony between his mind and body. An example of this is when he tries to stand up out of bed even though his new transformation has made it where he can’t. “He tried to get out of bed with the lower part of his body, but this lower part proved too difficult to budge” (7). As Samsa becomes used to his new body, his mind begins to change in accordance with his physical needs and desires. “He left everything again” (24). The final theme, the limits of sympathy begins with Gregor Samsa’s sister and the mother felt a great deal of sympathy for Gregor after his change because they suspect some aspect of his humanity remains despite his appearance. This later changed in the book because the stresses caused by Gregor’s presence wore down the family members’ sympathy and even the most caring of them find that their sympathy has a limit.

This section contains an evaluation of Kafka’s book. The first thing that strengthens Kafka’s writing is his talent to put his personal life into a fictional story. Kafka’s writings largely originated from the conflicted relationship he experienced with his family, especially his father. This biographical connection has been much discussed, and it is easily perceived in Gregor Samsa’s reaction to his family. Gregor nevertheless seeks throughout the tale to be accepted into the family circle. “Gregor’s sole concern has been to do everything in his power to make the family forget as quickly as possible the business disaster which had plunged everyone into a state of total despair” (23). Made aware of his alienation from them by his transformation, he vainly attempts to ignore the change at first and to maintain a sense of normality, until he is finally abandoned by his sister, with whom he had had a close relationship. It is her firm rejection of him as a person that ultimately causes him to surrender his own sense of self, precipitating his death. “It has to go, that’s the only solution” (49). The only problem with his writing including his personal life is that some readers may be confused with the theme. This is the first weakness of Kafka’s writing.

The second strength of Kafka’s writing is his combination of absurdity and symbolism. This is what makes the story so complex and interesting to read. Having a piece of strange content in a story can help keep a reader’s attention and within this book there in never a normal moment. There was always something abnormal going on whether that been when Samsa turned into a bug or when the housemaid would come to visit him in his room. “She never failed to open the door a crack every morning and every evening and peek in hurriedly at Gregor” (42). However, not everyone enjoys such a complex and absurd story because they may not understand exactly what is going on and it may actually bore them. The reason it may bore the reader is that since the whole story is absurd the reader may want to have a change in the story once in a while that is a calm change, and this is the second weakness of Kafka’s writing.

Finally, the main problem some readers might point out is that this story basically ends abruptly. The ending of the book includes the death of Samsa and then his family just deciding to turn around their lives. “They decided to spend this day resting and going for a walk” (54). Since the book ends abruptly readers may complain there should be a small series to explain what goes on with the family after Samsa’s death. Readers may also suggest a note at the end of the book that gives the readers more of an idea about what the Samsa family does. Although the story does end abruptly it shows how Samsa’s family actually was and it also gives the readers an insight of how the author’s family life was as well. This is the third strength of Kafka’s writing.

This critical review has evaluated the book The Metamorphosis by Franz Kafka. The themes Kafka presents are very odd but also interesting and he does a great job of demonstrating these themes by putting his own family in this fictional story. However, his writing is weakened by how his themes may be presented, the absurdity of the story, and how abrupt he makes his story end. These three things also have their own strengths including, having three different themes creates an interesting story, the strange content of the story intrigues readers, and the abrupt end of the story allows readers to understand the author’s personal life.

A Critical Review of The Metamorphosis. (2020, Sep 17). Retrieved from https://studymoose.com/a-critical-review-of-the-metamorphosis-essay 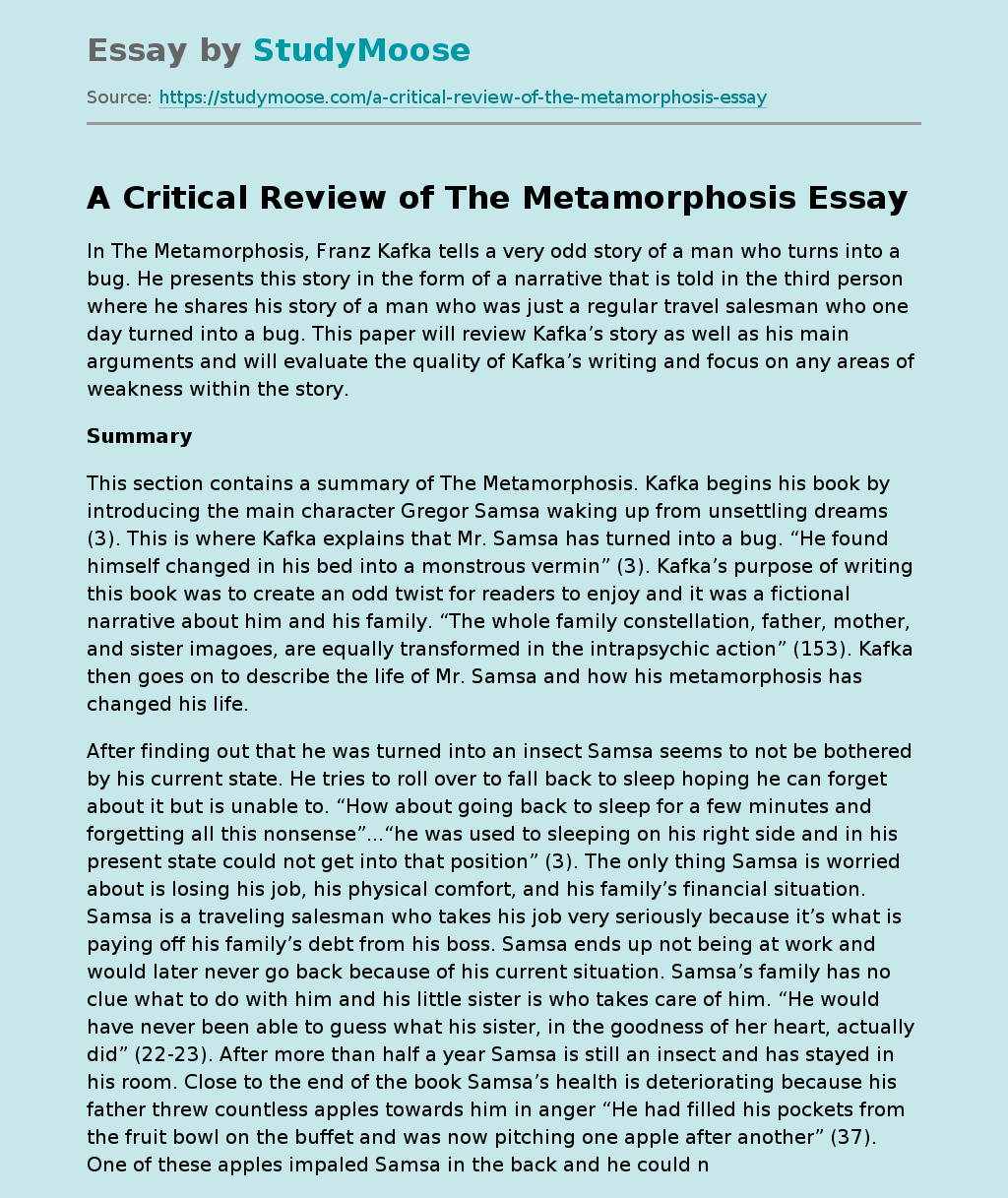