A Comparison of Universal Law by Kant and Mill

In looking at universal law and how to go about handling it in one’s every day life, both Kant and Mill put forth excellent, yet different, methods. Kant explains in depth about reason, senses, and how to treat others in relation to your end goals. Mill focuses primarily on happiness and what is moral and immoral as it corresponds with one’s “duties”. Those duties, he says, are in a person’s life from the very beginning and often define who we are.

Don't use plagiarized sources. Get your custom essay on
“ A Comparison of Universal Law by Kant and Mill ”
Get custom paper
NEW! smart matching with writer

Immanuel Kant says that moral laws are only universal through pure reason, also referred to as an a priori investigation. With that said, it is important to define exactly what “a priori” means; it is explained as something that has not been experienced in one’s five senses, and simply by pure reason in order to gain knowledge about various truths. An important thing to note is that Kant refers to formal philosophy as logic, saying, “logic cannot have any empirical part…for in that case it would not be logic…which is valid for all thinking and which has to be demonstrated” (Kant, Page 1).

Kant makes the difference between logic and the senses very clear. Nothing that effects someone in their senses can also be considered as logic. In other words, by using an a priori investigation, moral laws can be proven to be absolutely necessary, and therefore, universally true. To go along with his point, empirical experiences give different people different reactions since all senses are unique, which would not cause a consistent response. It is crucial to have a priori in every day life, because those laws which are considered to be moral and true undoubtedly hit home in the senses. However, pure reason is much more reliable and produces better results. A human being’s senses are too unpredictable to base the responsibility of deciding something to be universal on.

Kant makes sure that he clearly differentiates the two types of imperatives, which are hypothetical and categorical. A hypothetical imperative “represents the practical necessity of a possible action as a means for attaining something else that one wants… [and] the categorical imperative would be one which represented an action as objectively necessary in itself, without reference to another end” (Kant, Page 25). An “imperative” is essentially a command, which says “what action possible by me would be good, and it presents the practical rule in relation to a will which does not forthwith perform an action simply because it is good” (Kant, Page 25). As established in the previous paragraph, a universal moral law is something that must be decided with pure reason. Any moral law about how to act or be is considered to be hypothetical, because those rules operate under the assumption that a person has goals of morality and happiness. On the other hand, imperatives that are not hypothetical are the universal moral laws, since these laws tell a person to do something no matter who they are or what they want in life since the law is in itself considered to be “good”.

In order to support himself by saying universal laws will be supported not by hypothetical imperatives but by categorical imperatives, Kant had to create his three categorical imperatives. The first categorical imperative is to act in a way that the rule for your given action could be in turn universalized. This means that everyone had to be doing it all the time in their lives. This imperative is quite simply the golden rule of “treat others the way you would want to be treated”, and really puts into perspective whether or not society would be successful if everyone else had the same thoughts as you do. The second categorical imperative is to treat people as an end, and never as a means to an end. More simply, this means to never use anyone in a situation to get something else. This shows that you only have your best interests in mind. This imperative is rationalized because, “rational nature exists as an end in itself. In this way man necessarily thinks of his own existence…but in this way also does every other rational being think of his existence on the same rational ground that holds also for me” (Kant, Page 36). It is extremelyimportant and valuable to  follow the second categorical imperative in day to day life. The third and final categorical imperative is to act strictly by maxims that would harmonize with a possible kingdom of ends. The notion of using maxims to guide actions is very crucial, because “hereby arises a systematic union of rational beings through common objective laws, i.e., a kingdom that may be called a kingdom of ends” (Kant, Page 39). The collection of rational beings together could contribute greatly to universalizing moral law, since they all have the same morals.

The moral law is to act in accordance with the demands of practical reason. In Kant’s mind, practical reason issues a certain “duty” to respect its law, which means that morality is rooted in sheer duty. Moral law gets its origin from the different formulations of the categorical imperatives.

Mill introduces the concept of the principle of utility by providing evidence that this principle operates under the assumption that people care about the happiness of themselves and those around them. This principle has to do with people’s subjective feelings as well as the punishments that come with not achieving total happiness, and how we must strive for unity with others. Mill explains that this unity must be widen beyond one’s family and friends through education. To go along with the principle utility is the two pleasures, or as it is stated, desires. The first is that something is desired or capable of being desired. The second is that something is desirable and ought to be desired. To tie this back to happiness, the fact that people desire their own happiness does not mean those same people desire the happiness of others. That needs to change and will change once a general utility is established.

Mill brings up the internal sanction of duty and defines it as the voice of conscience that gives opinions and decides what is morally right and morally wrong for a person to do. This leads to the feeling of rewards and punishments, as doing something you decide to be morally good makes you feel rewarded, and doing something you decide to be morally wrong makes you feel punished. As Mill explains, “the internal sanction of duty, whatever our standard of duty may be, is one and the same a feeling in our own mind; a pain, more or less intense, attendant on violation of duty, which in properly cultivated moral natures rises” (Mill, Page 28). The internal sanction of any morality is described as a “subjective feeling”, which comes from how someone is raised by their parents and how they continue to socialize throughout their lives. Mill believes that a person’s sense of duty is put into them from their upbringing, meaning that it is acquired base on the situations they encounter and how they handle them starting at a young age. Mill fully acknowledges that the subjective feeling is a difficult thing to grasp, and says, “I see nothing embarrassing to those whose standard is utility in the question, What is the sanction of that particular standard? We may answer, the same as of all moral standards—the conscientious feelings of mankind” (Mill, Page 29). The conscience is quite literally the only factor that goes into the concept of the internal sanction of duty, and one’s decisions are based on whether they decide an action is moral or immoral.

Mill believes that laws cannot be the ultimate standard of justice, since there are even flaws and injustices within the legal system. Justice is considered to be a concept that is unified, and Mill thinks that assistance in deciding whether something is just or unjust can come from looking at the roots of the words. Mill says that justice is oftentimes used in situations where we do not want legislation.

I believe that Immanuel Kant’s reasoning with regards to how we should look at and deal with moral laws is the most persuasive. His inclusion of the categorical imperative and three separate ideas of it is extremely interesting and valid, as it can apply to all situations in every day life. If a person follows the simple guidelines of treating others the way they would want to be treated, never treating others as a means to an end, and acting according to their maxims, the world would be much better off. As a result of this, everyone would have essentially the same morals and therefore have the same actions throughout that process. As this relates to Mill’s thinking, I fully understand that the concept of the principle of utility is an excellent argument. Living according to happiness of not just yourself but those around you is a way that many people live. However, happiness and justice just do not do it for me in this case. There has to be more than that. Kant provides more through his categorical imperative and in explanations, I could think of situations where I have gone both for and against what he says. I remember those results, and every single memory I had of going against what he described ended in a negative way for me. His guidelines are clear, concise, and ultimately, the correct way in handling universal law.

A Comparison of Universal Law by Kant and Mill. (2021, Sep 10). Retrieved from https://studymoose.com/a-comparison-of-universal-law-by-kant-and-mill-essay 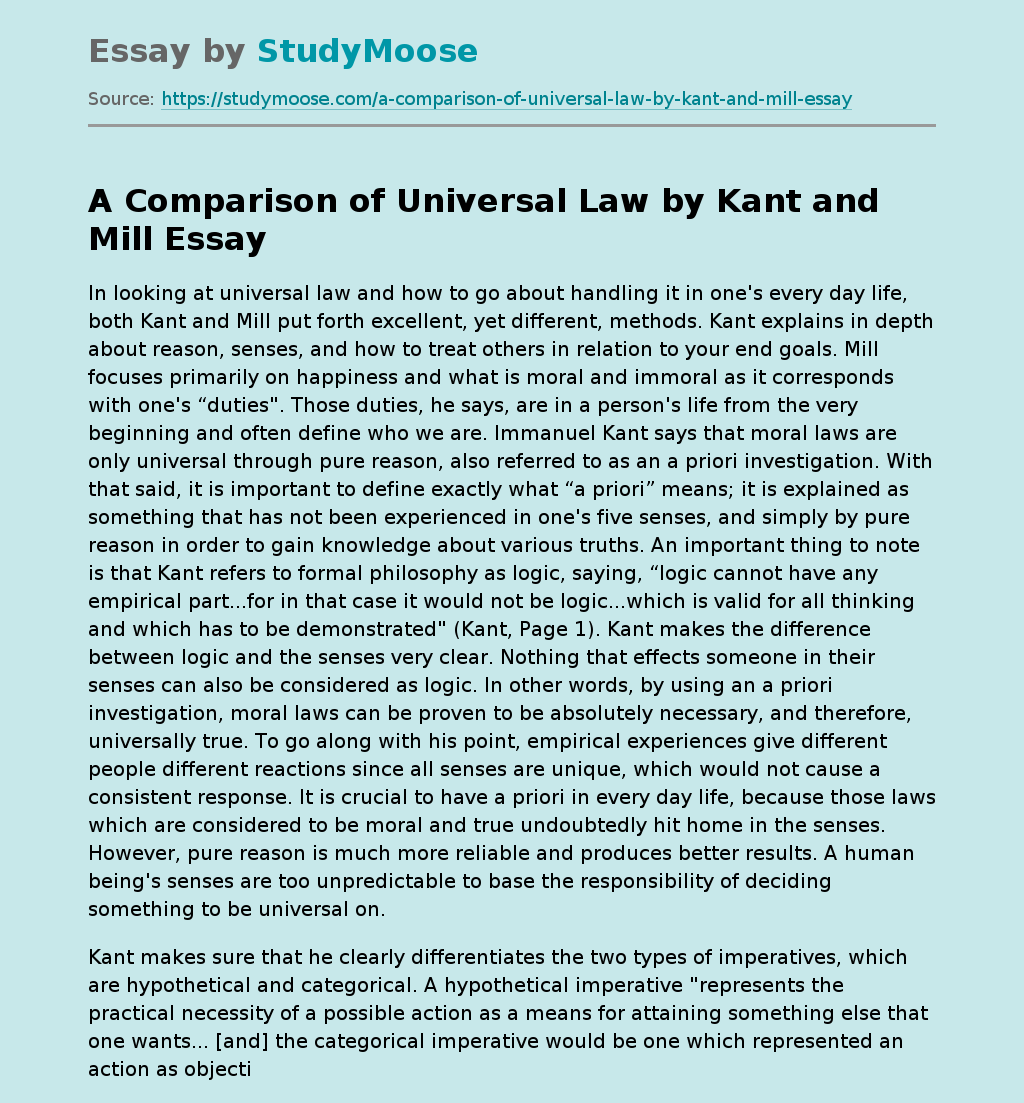