One Proposed Maxim as a Universal Law

3.Ask whether your maxim is conceivable in a world ruled by the universal law; In a real world if individuals earned 620million for a years worth of work there are bound to be huge increases of income and spending going around the markets.

Don't use plagiarized sources. Get your custom essay on
“ One Proposed Maxim as a Universal Law ”
Get custom paper
NEW! smart matching with writer

A downfall of the economy will occur due to business halt in the competing of prices. People will be greedy and will want everything that money could possibly buy which will result in shortages of products and services. Market demand and supply will cease to exist. In conclusion, this maxim is not conceivable in the real world ruled by universal law.

4. Ask whether you would rationally act on your maxim in such a world. IF I had to earn 620million one years worth of work,

I would honestly be over indulging and over spending money on unnecessary material items and food. Eventually I would be following an unhealthy lifestyle resulting in many health related problems like stress, obesity and so forth. Of course I would be really rich! But what would my purpose be thereafter? I therefore would never act rationally in such a world.

On the basis of your analysis, answer the following questions:

00? (You might want to do a bit of research into the nature of Whitey Basson’s 2010 earnings). According to Kants theory this would be categorized as morally binding. A talented guy like bassoon is terribly rare. I think that this earnings would be seen as an imperfect duty, because this depends on the preference of humankind. Whitey Basson cultivated his own talent by investing his good education and remarkable people skills into building the business and making it the most successful one today. Kant would therefore accept the earnings for whitey has not stolen from anyone or broken any rules. He reaped the rewards of his benefits.

•What do you think about Whitey Basson (or you) earning ZAR 620,000,000.00? However, It is unfair to look at them as one year’s income, as those were earned over 40 years. So he deserved to be paid a huge amount for his enormous talent and knowledge in growing the business into a successful one. They make 50m-60m sales a month in seven jurisdictions. It is fair to be rewarded for such hard work and dedication but not in such large percentage increases especially when the state of the economy is not as rapid as the percentage increase in income.

•Why do you think this?

These figures make no sense of the argument that companies need to pay such vast amounts in order to retain top skills, because more than 20 of the top 100 highest paid executives in 2010 are no longer in their positions today. According to a source “Figures proved that South Africa was a rich country, but the distribution of that wealth left just 20 people owning R112.2 billion, while 48 percent of South Africans were living below the poverty level of R322 a month. Sixteen percent of employed workers earned less than R500, 33.4 percent earned less than R1 000 and 60 percent earned less than R2 500 a month”

One Proposed Maxim as a Universal Law. (2016, Mar 20). Retrieved from https://studymoose.com/one-proposed-maxim-as-a-universal-law-essay 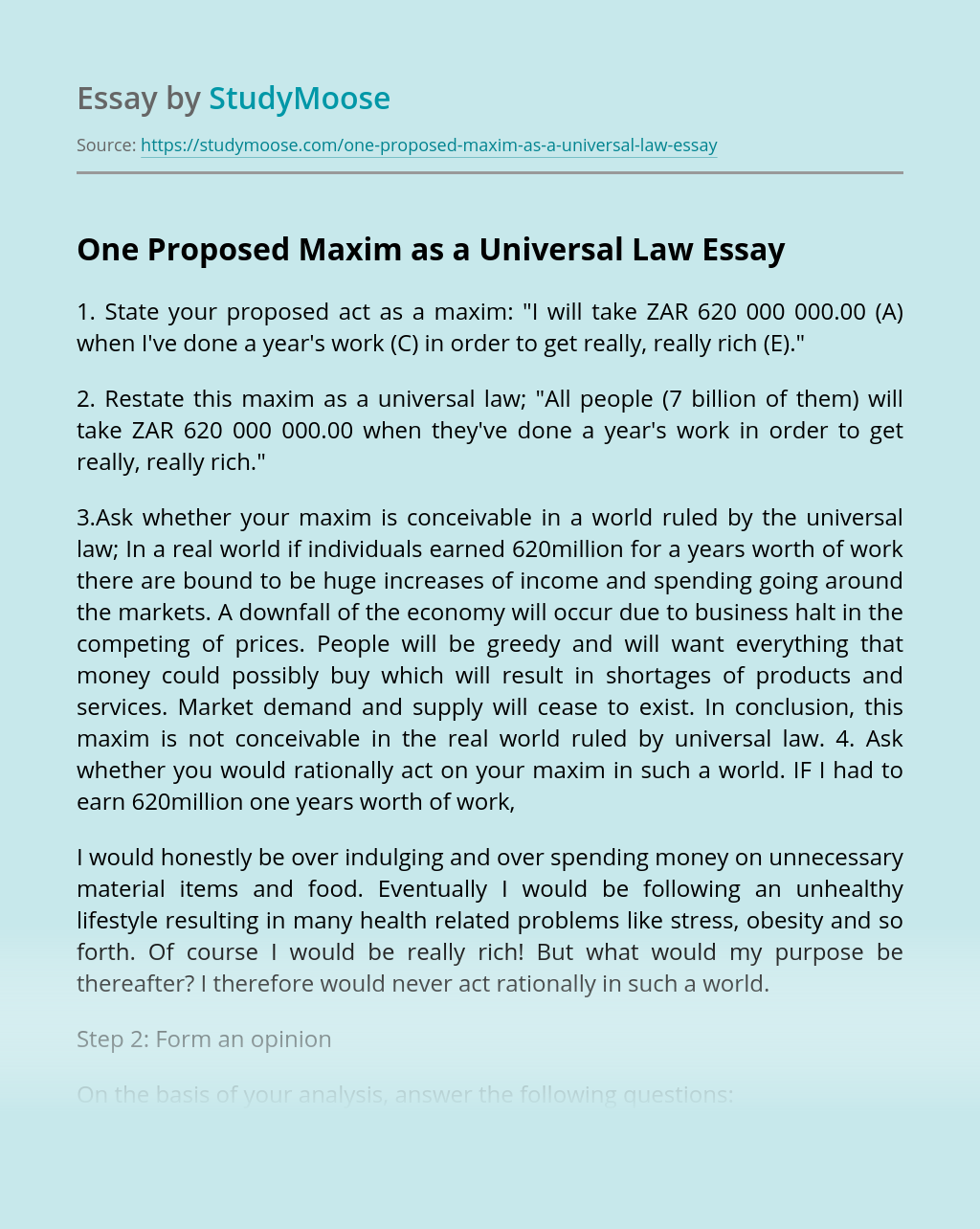