A Change Of Heart About Animals: Rifkin’s Analysis Essay

How many times people give all their trust, love and affection to someone who inevitably cheats, betrays or disappoints them? Who has the chance to cure and take care of an animal knows that this wont’ ever happen, they remain faithful and loving by your side in whatever situation.

There are striking similarities between human and animal beings, from their astonishing intellectual and cognitive abilities, to their widely developed emotional side. People should reconsider and change the way they treat and relate our fellow creatures, legally and in everyday life, because they are much more than an experiment, or a children amusement or an accessorize, they are living beings.

Don't use plagiarized sources.
Get Your Custom Essay on A Change Of Heart About Animals: Rifkin’s Analysis Just from $13,9/Page

Jeremy Rifkin is an American writer, public speaker and activist who wrote an article for the Los Angeles Times in 2003 , meaningfully dense from the title: ” A Change Of Heart About Animals”. In this article he sheds light on the human like qualities of animals, emphasizing how similar they are to us, providing examples like persuasive studies and accurate data.

Our everyday companions do have empathy, intelligence and feelings and should be treated as such.

The author starts building up his credibility with precise and sophisticated diction through the entire text, and making use of universally highly recognized sources. Referring to studies on pigs’ social behavior at Purdue University or to findings published in the Journal of Science, he obtains the attention and the trust of the reader. In fact references to the highest level universities and science magazines, give the reader a sense of secure reliability on the author, associating these names to quoted scientists and prestigious researches.

Moreover Purdue’s studies on pigs that showed how the lack of physical and mental stimuli can depress and deteriorate pigs’ health, were heartily taken by the European Union. Especially in Germany, the government took action encouraging the farmers to stimulate pigs with human contact and toys every day. Researches taken so seriously not only by a national government, but also by an institution like the European Union, lead to a growth of the author’s ethos even for the most skeptical readers, installing a global sense of trust.

Then Rifkin goes on exploring the most emotional and sympathetic human like aspects of our closest nature relatives. Since animals share the same emotions and anxiety as humans do, the reader can relate on an expressive level with them. An actual example that Rifkin uses, was how elephants will mourn over a death of their kin, standing next to them, touching their dead bodies with their trunks. Elephants understand the sense of mortality experiencing grief, and the sensation of loss after the death of a beloved one as we do.

Any person who unluckily had to face how struggling the last goodbye to someone close is can connect with them, feeling empathy and at the same time sadness thinking about their own tough experiences. And at the end, as last heart warming pathos appeal, Rifkin gives colorful examples of the horrible treatments that some animals must go trough like painful laboratory experiments, inhumane conditions and slaughter. These portrays of unevenly horrific treatments put negative images in our minds, making the reader really wonder how possibly people can treat with any regards creatures having so many things in common with us.

Rifkin strongly appeals to the reader’s logic as well, in fact one reason why animals are treated with so much inferiority is because they are viewed as having much less intelligence. On the contrary, the author displays how clever animals can be, including as proof the mind blowing results of two experiments. For instance, Oxford University scientists noticed how smartly two New Caledonian crows managed to use the right hooked wire to extract one piece of meat from a tube, in the majority of time in which the experiment was repeated.

Beyond impressive was Koko, a 300 – pound gorilla in Northern California, who was able to learn more than one thousand signs of the sign language and several thousand English words, moreover she scored between 70 and 95 on human IQ tests. The example of the unbelievably humane cognitive abilities of this clever female gorilla, is even more impressive and has a greater impact on who is reading because the primate family is widely known as being the closest to ours. The human race descends from the animal one, and feelings, language skills and anything purely related and considered human has not just appeared one random day.

Animals are much more similar to us than we ever thought, sensing and experiencing emotions like sorrow, depression and excitement. Moreover they have a mesmerizing level of intelligence, they can master sophisticatedly tool making tasks and possess qualities that the majority of people have never even imagined. How can people merely consider our four legged companions as just animals? It is so hard to believe and realize that still so many human beings are treating our fellow friends with no regards. When a man unfairly treats a creature so similar to him, who should we really consider as beast?

“The more I know people, the more I love my dog. ” said Mark Twain, and the way people treat animals depicts what kind of people they are. If we consider ourselves as people who deserve the title of human being, we should definitely behave in the best way possible toward them, protecting and guaranteeing them similar rights to ours, considering how similar we are.

A Change Of Heart About Animals: Rifkin’s Analysis. (2016, May 16). Retrieved from https://studymoose.com/a-change-of-heart-about-animals-rifkins-analysis-essay 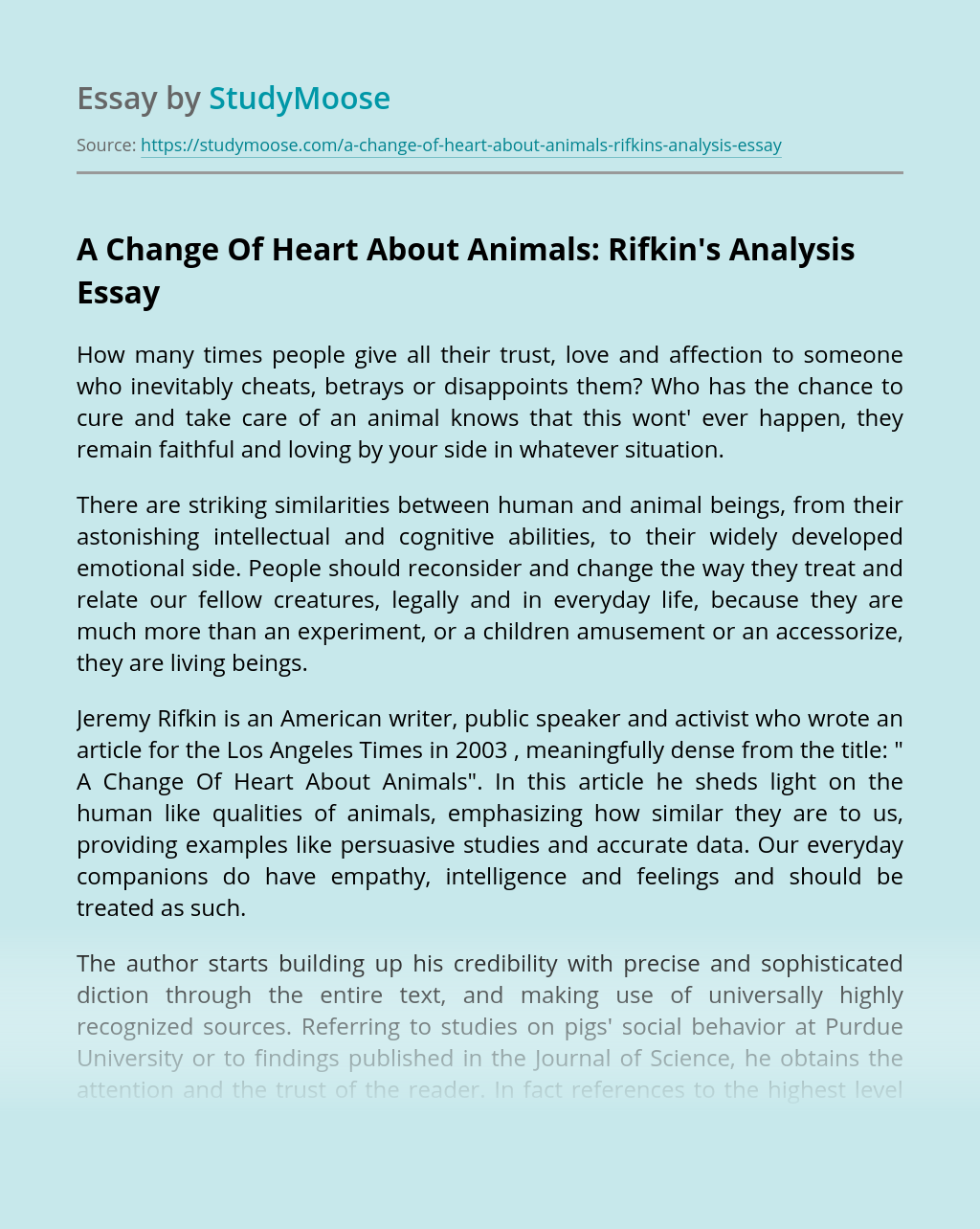 The rationale for my scheme of work (see appendix 1) is to meet both the learners’ needs and the curriculum requirements. Edexcel is the awarding body who supply the syllabus which gives the framework for delivery and assessment of the subject matter. The Edexcel ITQ Level 2 Certificate curriculum requirements will be met by learners... VIEW ESSAY

View sample
A Hybrid Vehicle Is a Vehicle That Uses Two

A hybrid vehicle is a vehicle that uses two or more distinct power sources to move the vehicle. [1] The term most commonly refers to hybrid electric vehicles (HEVs), which combine an internal combustion engine and one or more electric motors. However other mechanisms to capture and utilize energy are included. Power Power sources for... VIEW ESSAY

View sample
Get Essay
﻿What are the qualities of an effective employee?

In recent times, companies have to very competitive. Many companies want to improve their productivity. When it comes to productivity, employee and management effectiveness is of the utmost importance so companies can make more profit and compete better against other companies. Therefore, this essay will explain the qualities of an effective employee and outline the... VIEW ESSAY

Crisostomo Ibarra of the Noli Me Tangere, who, with Elias’ help, escaped from the pursuing soldiers at Laguna de Bay, dug up his buried treasure, and fled to Cuba where he became rich and befriended many Spanish officials. Thirteen years after leaving the Philippines, Crisostomo Ibarra returned as Simoun, a rich jeweler with a beard... VIEW ESSAY