Why should we conserve plants and animals?

The word “conserve” means preservation, especially of the natural environment. In plants and animals case, it means,

To keep in existence, to retain and to keep safe from harm or loss.1

Thousands of plant and animal species are being terminated every year due to many factors such as: removal of habitat, food reduction, human threats etc.

Don't use plagiarized sources.
Get Your Custom Essay on Why should we conserve plants and animals? Just from $13,9/Page

From the 1700’s to the year 2000, the number of species that have become extinct each year has soared from only 1 to 50,000. For example, the Mauritius dodo was extinct by 1690, Stellar’s sea cow by 1768 and the Great Auk by 1844. In 1990, there was only one of the Abingdon tortoises left in the world, and in 1952, the Balinese tiger became extinct. As the graph provided in the appendix 1 shows, the number of species becoming extinct as the years go on has increased dramatically in the last 30 years.

By the year 2025 the Earth could lose as many as one fifth of all species known to exist today. In recent centuries, hundreds of species have disappeared, almost always as a result of human activities. The passenger pigeon, one familiar example, was a source of food until excessive hunting and habitat loss caused its extinction in 1914. The North American bison, whose populations were decimated by settlers and market hunters in the 1800s, came close to sharing the same fate. Bison survive today only because of the efforts of early conservationists.

Food chains also play a part in the web of life.

Food-chain, a series of organisms each dependant on the next as a source of food.2

Every living organism on this earth is dependant on another. Humans rely on farm animals such as pigs, cows, sheep and chicken, as well as many other mammals. Animals such as leopards kill gazelle and zebra so they can feed. These are only a few examples of simple parts of complex food chains. Everything humans eat which is concerned with meat or plants, all get their food from another food source. It is the same for all organisms. This introduces an idea of the world being in a cycle, needing each other, and others needing them.

Ecosystem, a biological community of interacting organisms and their physical environment.3

The concept of ecosystems was first developed in the 1920’s and 1930’s. It takes into account the complex interactions between organisms-plants, animals, bacteria and fungi-that make up the community.

Species listed as endangered range from the largest animal on earth, the blue whale, to the majestic tiger, to the humble thick shell pond snail. Large or small, beautiful or ugly, all species play a role in the complex web of life. All of us depend on the natural resources of our planet. Each time a species is lost, the complexity, natural balance, and beauty of our world is diminished. And what threatens plants and animals ultimately threatens people as well.

The tiger (Panthera Tigris) is the largest member of the cat family. Other members of the same genus are the lion, leopard, and jaguar.

The rare Siberian tiger can measure up to 3 yards from nose to tip of tail. It weighs on average 500 pounds and can bound up to 30 feet in one leap.4

It also has thick yellow fur with dark stripes. From this information alone on only one sub-species of tiger, you can see that the extinction of this mammal would be a great loss to modern day society and the world we live in today

Take the tiger as a main example. This century has already seen major losses of wild tigers. By the 1950s tigers living in the Caspian Sea were extinct. Populations of tigers that once inhabited the islands of Bali and Java are now extinct. The last Bali tiger was killed in 1937 and the last Java tiger sighting occurred in 1972. India has the largest number of tigers with between three thousand and thirty and four thousand, seven hundred and thirty five.

The South China tiger, with at best twenty to thirty individuals is nearly extinct in the wild. It is estimated that only 5,100 to 7,500 individual tigers now remain in the entire world. These remaining tigers are threatened by many factors, including growing human populations, loss of habitat, illegal hunting and the species they hunt, and expanded trade in the tiger parts for traditional medicines.

One of the main reasons for poachers to kill tigers is their use in Chinese medicines. Tigers are worth more money dead than alive, which, if you think about it, is very sad indeed. Poachers who kill deer for their own purposes may not realise it but they are also destroying tiger’s one by one. Deer are one of the main sources of food for tigers and if they are cut down in numbers, ultimately so will the tiger’s be.

Already efforts are being done around the world to try to conserve the tiger and it’s other endangered companions. In India the local people sell paintings of tigers and other wildlife in order to try and support they’re local tigers. Also, in 1990, Indonesia passed a law to give all subspecies of tiger within its borders full protection. And in 1992, passed a bill stating that anyone in possession of tiger pelts, or parts must have them registered and would require a permit. China also made tiger bone illegal in 1993. Each of these things contributes to the effort of saving the tigers.

Elephant populations are also on the brink of extinction due to poachers who kill elephants for their ivory tusks. An international ban on ivory trade, instituted in 1989 by the Convention on International Trade in Endangered Species of Wild Fauna and Flora (CITES), has diminished the illicit ivory trade and reduced the killing. Over 120 countries, including Britain support the ban.

Efforts to save endangered species also include the propagation of breeding stock for release in the wild, either to restore a breeding population (as in the case of the peregrine falcon) or to augment a natural population (as in the case of the whooping crane). Due to breeding captivity, the number of known California condors has risen from 27 in 1987 to 52 in 1992. Another approach involves the determination of critical habitats that must be preserved for endangered species. This means to set aside certain habitats and make the preservation areas for endangered species.

Much has been done to make the need of animals well known and to start a method of saving some of these creatures, but a considerably smaller amount of work has been done to introduce the uses of plants. Plants are of a considerable value to man not only as a source of food but as medicines and cures.

All food on earth comes directly or indirectly from plants.5

Many drugs have been obtained from plants. The opium poppy, (papaver somniferum) has provided man with the drug Opium. More commonly known as Heroin. Although heroin is not used much in medicine, Opium is used for morphine, a strong painkiller. The plant digitalis, the common foxglove, provides the drug digitalis, which is a type of heart medication. It strengthens the contractions and lengthens the beats so that the relaxation time between beats is longer. The mandrake provides hyoscyamine, which is used for sedation of a patient before an operation, and the rosy periwinkle provides vincristine, a treatment for leukaemia.

About 25 per cent of all medicines contain one or more active ingredients derived originally from flowering plants.6

It is thought that at least 2000 different plant species may contain anti-cancer properties.7

Although plants can be used as food and as some forms of medication, they can also be a poison. For example, Oleander is a source for rat poison. The
leaves and seed of the yew contain a strong alkaloid poison that can cause sudden heart failure, without any warning symptoms, and although belonging to a plant family that includes certain vegetables, many forms of nightshade are highly poisonous.

In drawing a summary to these arguments I conclude that we should conserve animals for many reasons. One of them mainly being because of the effect it would have on the world and its surrounding creatures. Food chains would be highly displaced, for example, if tigers were extinct, the food that they eat would escalate and in turn, their food would plummet. Deer would be on the increase as there would be no tigers to eat them and their surrounding habitats would decrease dramatically as the deer would need more food. As more creatures become extinct the effect will not only be to animals but to humans as well. Earth is a beautiful planet full of millions of different species of creatures in all shapes, size and form. Let’s make sure we keep it that way.

Why should we conserve plants and animals?. (2016, Jun 20). Retrieved from https://studymoose.com/why-should-we-conserve-plants-and-animals-essay 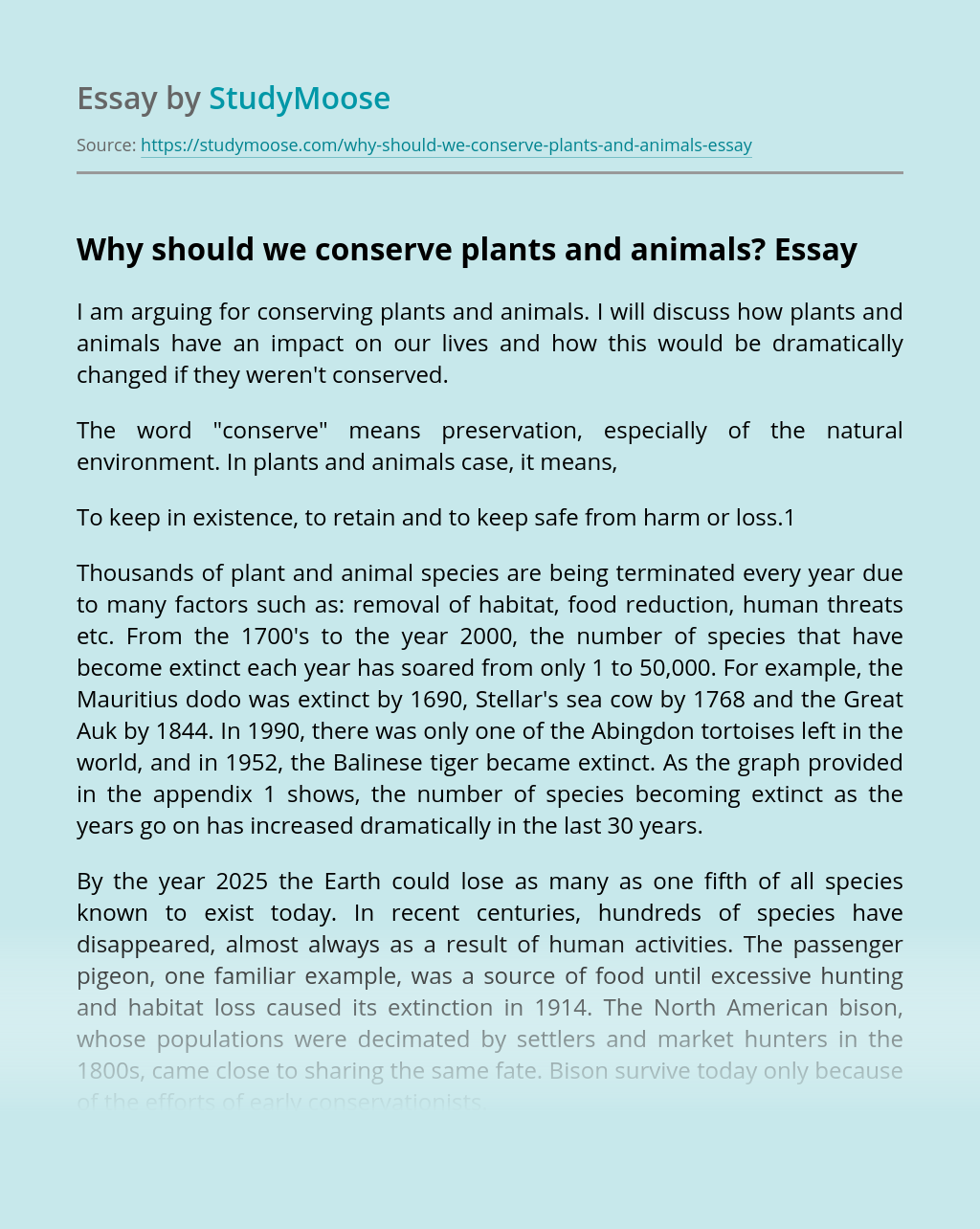 Rate this post I have recently read your article ‘Stuff the Tiger – long live extinction’ and disagree strongly with the views you put forward. Your arguments are unjustified and the examples you use to demonstrate are faulty and contradicting to each other . In this article, you have mentioned how extinction doesn’t have any...

Rate this post Endangered species are native species that faces a risk of extinction in the future. For example, animals that are already extinct like the dodo birds, platypuses that are going to be extinct and many more. These animals are endangered due to climate changes and habitat destruction. The term endangered species can be...

Rate this post Human beings, plants, and animals, are creatures that are a part of the world. There are a lot of species that we don’t know due to endangerment. There are many animals that our kids and our grandkids are not going to know either because now they are in danger of extinction. Many...

Rate this post Someday, we may never see tigers again because tigers are on the critically endangered list, which is why the National Zoo was celebrating Global Tiger Day. This is happening because of poaching and habitat changes. Large plantations have replaced a lot of tiger habitat in several tropical range countries. Tigers occupy only...