Intraspecific competition is a widely regarded principle mechanism in the structuring of communities and has an influence in the spatial dispersion of organisms such as plants. Knowing this, the authors designed an experiment to observe and understand the effect of intraspecific competition using Brassica rapa, operating under the precept that when the plant is grown in an limited space environment, the plants will grow quickly and will be able to produce offspring in a faster more efficient way.

Utilizing a two-treatment group set-up where B.

Don't use plagiarized sources. Get your custom essay on
“ Growth and Development of Brassica rapa Plants ”
Get custom paper
NEW! smart matching with writer

Intraspecific competition is a widely regarded principle mechanism in the structuring of communities (Abramsky and Sellah 1982).

Proficient in: Growth And Development

It is a known fact that plants that are grown in high density areas only have one choice: allocate the limited resources and grow rapidly (Siemens,et al.

2002) lest the organism fail to thrive and survive. It then becomes apparent that information gained from this area of study will have significant applications outside of the field of botany. In a time where reforestation and rehabilitation is a major issue, knowledge on intraspecific competition can help shape the success of efforts on plant-life conservation.

To further study this mechanism, the researchers developed an experimental set-up that evaluated intraspecific competition among plants. Using space as the experiment’s limiting resource, species of B. rapa were cultivated in two treatment groups and observed for the effects of intraspecific competition. Space is often viewed as a major limiting resource for sessile organisms since taking away another’s space eliminates its ability to acquire food (Vance, 1984, p. 1354).

The plant specie B. rapa was selected as the treatment model of choice since the specie is known for being an ideal experimental subject due to their small size, ease of cultivation and short life cycle. The main objective of the experiment was to observe and understand the effect of intraspecific competition on B. rapa due to limited space. The experiment operated under the main hypothesis that when the Brassica rappa plant is grown in an environment with limited space, the plants grow quickly and is able to produce offspring in a faster more efficient way.

On the other hand, the null hypothesis for this experiment was that the limited space will not play a role in the growth and reproduction of B. rappa. Lastly, the alternative hypothesis for the experiment was that limited space will affect the high density environment, allowing the seeds grown in a low density environment to flourish. Materials and Methods For the experimental set-up, two treatment groups were created. One group was classified as Low density and was comprised of two Brassica rappa seeds while the second group was classified as High density and consisted of 10 Brassica rappa seeds.

The plants were then dried and the roots and forage material weighed to determine biomass. Seeds were then separated. Data gathered from the experiment were treated using t-tests and Oneway Analysis utilizing treatment means and standard deviations. Results After cultivation of B. rapa in the two treatment groups, the researchers determined the following data using Oneway analysis and t-tests.

Additionally, a significant difference in the number of flowers produced [t=4. 168, DF= 352. 016, p= <. 0001] and seeds per plant [t=2. 41465, DF=369. 4544, p=<0. 0162] in each treatment group was identified in favor of the low density treatment group, supporting the alternative hypothesis that that limited space will affect the high density environment, allowing the seeds grown in a low density environment to flourish. These findings mirrored the results in a study conducted by Miller and Schemske (1990) in which they sought to measure the competitive performance of B. rapa. In the said study, three set-ups were created: non-competition, competition – intraspecific and competition – interspecific.

However, these results demonstrated the fact that there was no such difference in terms of biomass indicating that plants in the high-density treatment group were able to function at the same levels as the plants in the low-density group at least in terms of biomass achieved. Problems Encountered The experiment was fairly simple and the researchers did not encounter any problems. However, human error could undoubtedly have played a role in the first planting of the seeds. Many seeds could have been placed too close in proximity to one another and this would have caused a greater amount of competition and stress.

Solution Next time it would be advisable to measure the distance between the seeds in both environments to ensure that all seeds have an equal amount of space in which to thrive and thus provide for an equal opportunity and ability to survive. Further Studies To further evaluate the effects of the limiting resource of space and the plants ability to adapt, it would be advisable to observe and calculate the number of viable offspring produced in the next generation. References Abramsky, Z. , Sellah, C. (1982). 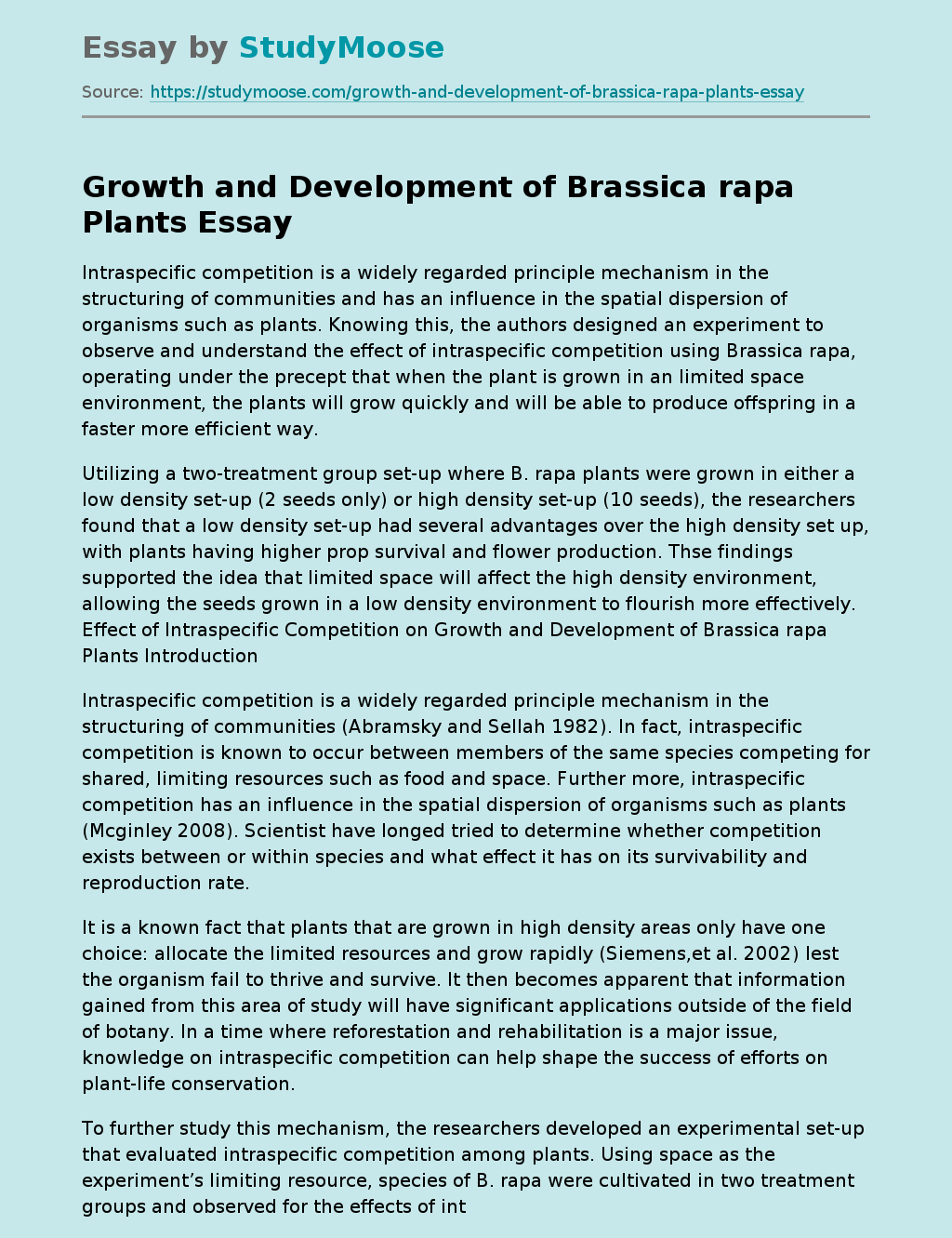