Compare and Contrast the Processes of Mitosis and Meiosis.

Many living organisms in the Earth can continue because of the process of producing individuals called reproduction. Both mitosis and meiosis which are nuclear division in mitotic and meiotic cell division respectively play important roles in reproduction. In this essay, the processes of mitosis and meiosis are going to be compared, and the roles and significance of these two processes in the life of flowering plants and mammals are going to be discussed.

Don't use plagiarized sources. Get your custom essay on
“ Compare and Contrast the Processes of Mitosis and Meiosis. ”
Get custom paper
NEW! smart matching with writer

A chromosome is formed by each DNA molecules coiling around some histone (special proteins). Before mitosis and meiosis, chromosomes duplicate. However, mitosis only has four stages while meiosis has eight stages. The four stages of mitosis are similar to the first four stages of meiosis that are called prophase, metaphase, anaphase and telophase. The pairing up of homologous chromosomes only occurs in meiosis, but not in mitosis.

After that, the chromosomes line up in the middle of the cell, then separate and are moved to two sides of the cell by spindle fibre. While mitosis forms two diploid (2n) daughter cells that are genetically identical to the parent cell after the four stages; meiosis still has four stages which are similar to the previous four stages, and finally produces four haploid (n) daughter cells that are genetically different from the parent cell.

For mitosis, it occurs in simple organisms (e.

g. bacteria) to produce offspring which this process is called asexual reproduction. Also, it takes place in somatic cells (in body), and is involved in providing new cells for the growth of multicellular organisms, replacement of worn-out or damaged cells (e.g. skin cells and blood cells). For meiosis, it forms haploid gametes in gamete-producing cells in sex organs (e.g. testes and ovaries in
animals, ovaries in plants) for sexual reproduction. Moreover, it provides genetic variations among daughter cells to increase the chance for the species to survive when environmental conditions change.

Even though asexual and sexual reproduction have their own advantages and disadvantages, mitosis and meiosis both are central in species’ continuation on the Earth including the flowering plants and mammals.

To conclude, mitosis and meiosis are really vital to any living organisms, and none can be excluded, as they can produce individuals to last species on the Earth.

Compare and Contrast the Processes of Mitosis and Meiosis.. (2016, Apr 01). Retrieved from https://studymoose.com/compare-and-contrast-the-processes-of-mitosis-and-meiosis-essay 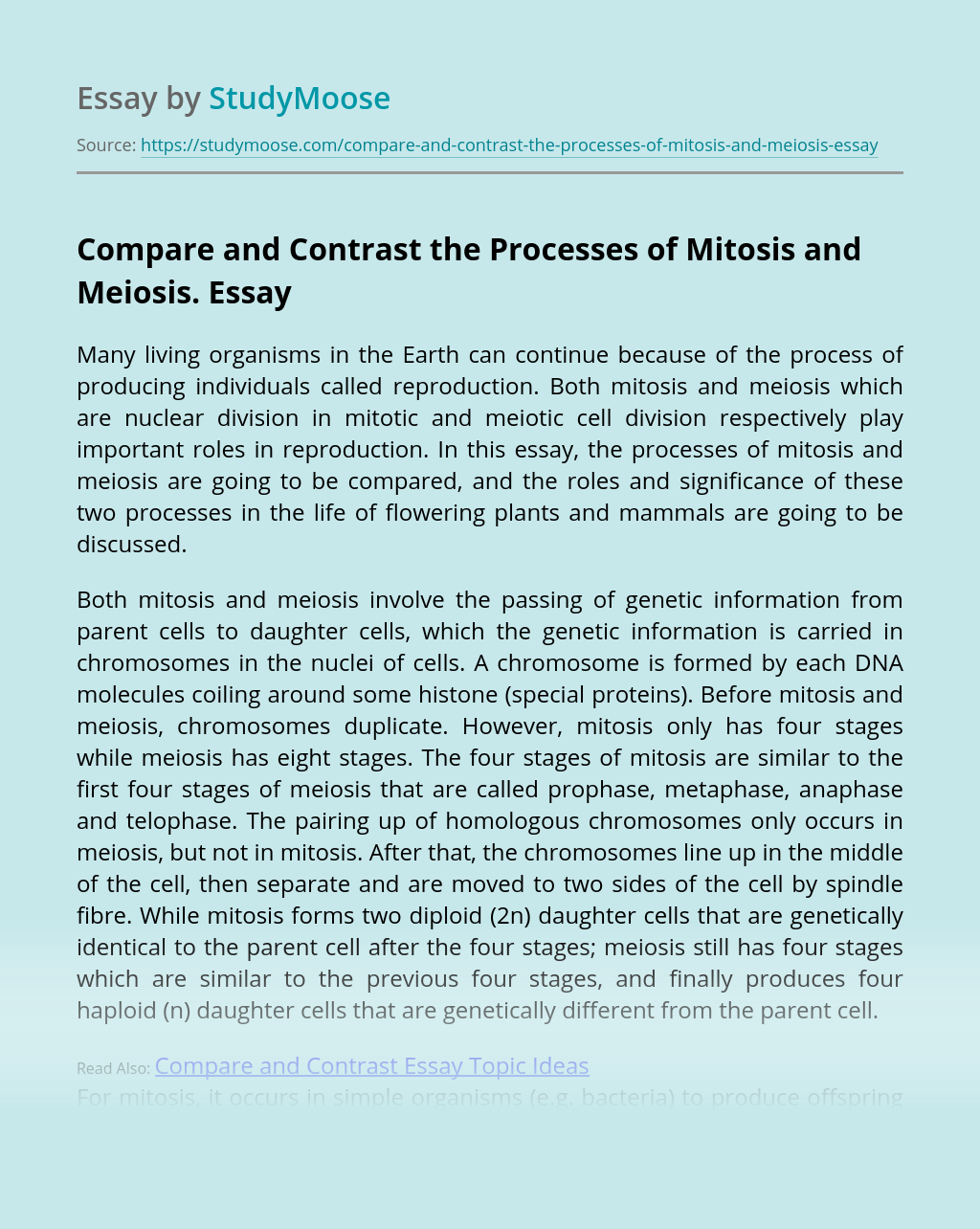