Born into a strict Catholic household in Indian Creek, Texas in 1890, Porter was not raised in an environment where a young female author could easily flourish. Despite this, in 1930, Porter published “Flowering Judas”, a short story that marked the beginning of her impressive literary career. In many aspects of her life, she grappled with the oppression she felt from society, which was the driving force behind much of her work. Porter’s involvement in the Mexican Revolution “exerted a powerful attraction on her and reinforced the personal spirit of revolution that was to infuse itself into her fiction”.

Don't use plagiarized sources. Get your custom essay on
“ Katherine Anne Porter  ”
Get custom paper
NEW! smart matching with writer

Katherine Anne Porter’s own struggle for freedom, especially as a woman, is reflected in Laura’s character in “Flowering Judas.”

“Flowering Judas” follows the journey of a young American woman, Laura, who moved to Mexico to be a teacher amidst the fallout of the Mexican Revolution. While she was there, Laura dealt with the advances of many powerful men. She struggles to free herself from the confines she, along with society, had placed on herself.

Laura was forced to decide if she wanted to preserve her own freedom and identity or to endure the rest of the revolution, which was depleting her of everything she had. This aspect of political and social liberalism, as seen in “Flowering Judas,” is common in Porter’s other writings.

Laura, the heroine in “Flowering Judas,” continually strove for freedom, mainly from the control Braggioni exerted over her. Bragging epitomized everything that was wrong with the revolution.

He was not a leader because he wanted political reform or to better the lives of the people, but because he yearned for power, which he had in spades. As Braggioni admitted, he liked to indulge in luxuries. He imported his cologne from New York simply because he could. He satisfied his own needs before he even gave a thought to the revolutionaries. When Laura visited the political prisoners, they asked where Braggioni was and why he wouldn’t do anything to help. While one of the prisoners, Eugenio, was dying from taking too many of the pills Laura gave him, Braggioni waved it off.

He said that Eugenio was a fool and he was better off dead. As showcased in this scene, Braggioni showed no loyalty. He did not care about the carnage shed for his cause or the emotional fallout it would bring, especially to Laura, as long as he came out on top. “[R]uthlessness and sadism are dominant in the emotional make-up of the man [Braggioni]. For it is on the rock of Braggioni’s person(ality) that Laura’s idealism is shattered”. Laura became disillusioned with the Mexican Revolution, especially because of its leadership, or lack thereof, just as Porter did. Laura’s lack of passion for the movement flowed into all aspects of her life, causing her to eventually desert everything that made her herself.

The brash nature of those involved in the Mexican Revolution caused both Laura and Porter to question their own respective roles in the movement. The rebellious, outspoken essence of these young women is what made them join the revolution. They stood up for those who could not stand up for themselves. Porter and Laura saw a chance to make a positive impact and jumped at the opportunity to do so, even if it meant leaving the safety of their native country for a foreign one in the middle of a deadly revolution. Why would one give up her intrinsic values for the sake of a revolution that was fighting for the protection of those same values for millions of other people?

Laura originally felt that, in order to gain her own independence, she must betray the revolution. At the end of the story, Laura had a dream in which Eugenio tempted her with flowers from the Judas tree. An obvious parallel to the tree Judas, a betrayer of Jesus, is said to have hung himself on in the Bible. The flowers on the Judas tree are said to have later turned red as a symbol of shame. Laura felt immense guilt for the role she played in Eugenio’s death, even though she tried to get him for help, but was discouraged by Braggioni. “the story ends with a jarring, volatile effect, expressing the state that Laura is in, for her ideals have also been devoured, and in Mexico, she is dislocated without them”. Laura saw her betrayal of Eugenio as one of the many things she gave up at the expense of the revolution. In the end, however, she gave up the revolution. Not because she did not see the value in fighting for freedom, but because she could not justify losing her own freedom.

Laura lived her life as if it were a series of small battles; always sacrificing one important thing in her life in order to make room for another. She abandoned Eugenio and her religion to ensure the progression of the revolution. Laura felt as though it was her duty to make the revolution a success, as Braggioni did nothing to further the cause, which is why she invested so much of herself in it. “She seems to be making up for Braggoni’s failure .while Laura feeds the voracious hunger of revolutionary duty, Braggoni makes the revolution itself the source for gratifying his own peculiar hunger”. Laura poured everything she had into this cause. She kept giving to it, even though she was not seeing much change. She gave until she could no longer rationalize it. While Laura thought she was sacrificing for the sake of the revolution, it seems as though she was doing it for the sake of Braggioni. She made herself dull in order to escape the scrutinous eye of Braggioni. Similarly, in her youth, Porter struggled against the societal standards for a woman. As Unrue suggested, Porter being told to present herself in a way that was compatible with her father’s old-fashioned paternalism and political views drove her to commit to advocating for and writing about women’s rights.

While Laura was constantly chipped away at herself to give more to Braggioni and the revolution, she never fully gave in. Laura was a very intelligent, sharp-witted young woman. She realized she was losing her spirits to the cruel advances of Braggioni, and she tried to ward them off. Bragging, however barbarous and inappropriate he was, was definitely not stupid. Laura realized she could not plainly turn him down, so she did so in a way that did not clearly show her resistance. She knew she had to thwart his advances, not just because she was invested in the revolution and not focused on men, but because of the way he treated his own wife, who characterized him as, “the cause of all her sorrows”.

If Laura were to enter into a relationship with Braggioni, it would only further fuel the betrayal of her own ideals, and she knew it, so she chose her independence, one of the things she knew was not worth giving up. Flanders proposed that, based on Porter’s childhood dominated by her austere grandmother, Porter believed that a woman must stay alone in order to achieve freedom. This aspect of being liberated only by solidarity is reflected in Laura’s abhorrence of Braggioni and her other suitors in “Flowering Judas.” Porter and Laura alike very much valued their respective independence. “Porter represented the woman traveler as a startling figure who disrupted, with her very presence, preconceived notions about women in Mexico”. Porter had to break free from the confines of her previous conceptions about how a woman was to behave. She was a successful revolutionary because she broke down barriers and did so unapologetically. Her courage and conviction shone through in her time in the revolution and, later, in her writings.

Porter’s upbringing is strongly reflected in Laura. The old-fashioned, southern Catholic ideas she was raised with strongly impacted Porter. “The combination of gender, class, and religion possessions that make up a southern lady eventually permeated all aspects of Porter’s life”. She was taught that women should be obedient and know their places in society. In “Flowering Judas,” Laura is seen by others merely for her beauty, not for her contributions to the revolution. The more time Laura spent around Braggioni, the more inferior to him she felt. He vividly spoke to her about her body as if she were an object. Later, he said that all women were the same and they “‘are stupid, they are lazy, they are treacherous, they would cut my throat for nothing’”. The dehumanization Laura faced at the hand of Braggioni, and others throughout the story clearly play a part in her eventual dissatisfaction with the movement.

Moreover, the conflicts of Catholicism are evident in the story. Porter’s ties to Catholicism weakened with age. The strict rules imposed upon her, especially by her family, made her resent the religion. Religion was supposed to free and transform one’s soul, but for Porter, it did the opposite: it held her back. In “Flowering Judas, with the revolutionaries dismissing religion, it was clear that they believed politics were incompatible with religion. So much so that Laura was afraid to be seen leaving a church, thinking it would backfire on her.

“Perhaps Laura’s ‘strength’ as well as her weakness may be more clearly seen against her Catholic upbringing: dedication to a cause against transcending a personal view of the world. But even as Laura feels she has severed her last tie with the church, she is still the prisoner of her own emotional necessity, of her past”. As much as Laura tried to free herself, she was still trapped. Both Porter and Laura, respectively, were put into a box by many aspects of the revolution. No matter what they tried to do, they could not liberate themselves from the damaging confines of that box. That is, until, they realized how much their respective independence mattered. By being relieved of the burden of the revolution, society, and anything that was oppressive to freedom, both Laura and Porter were able to find freedom. 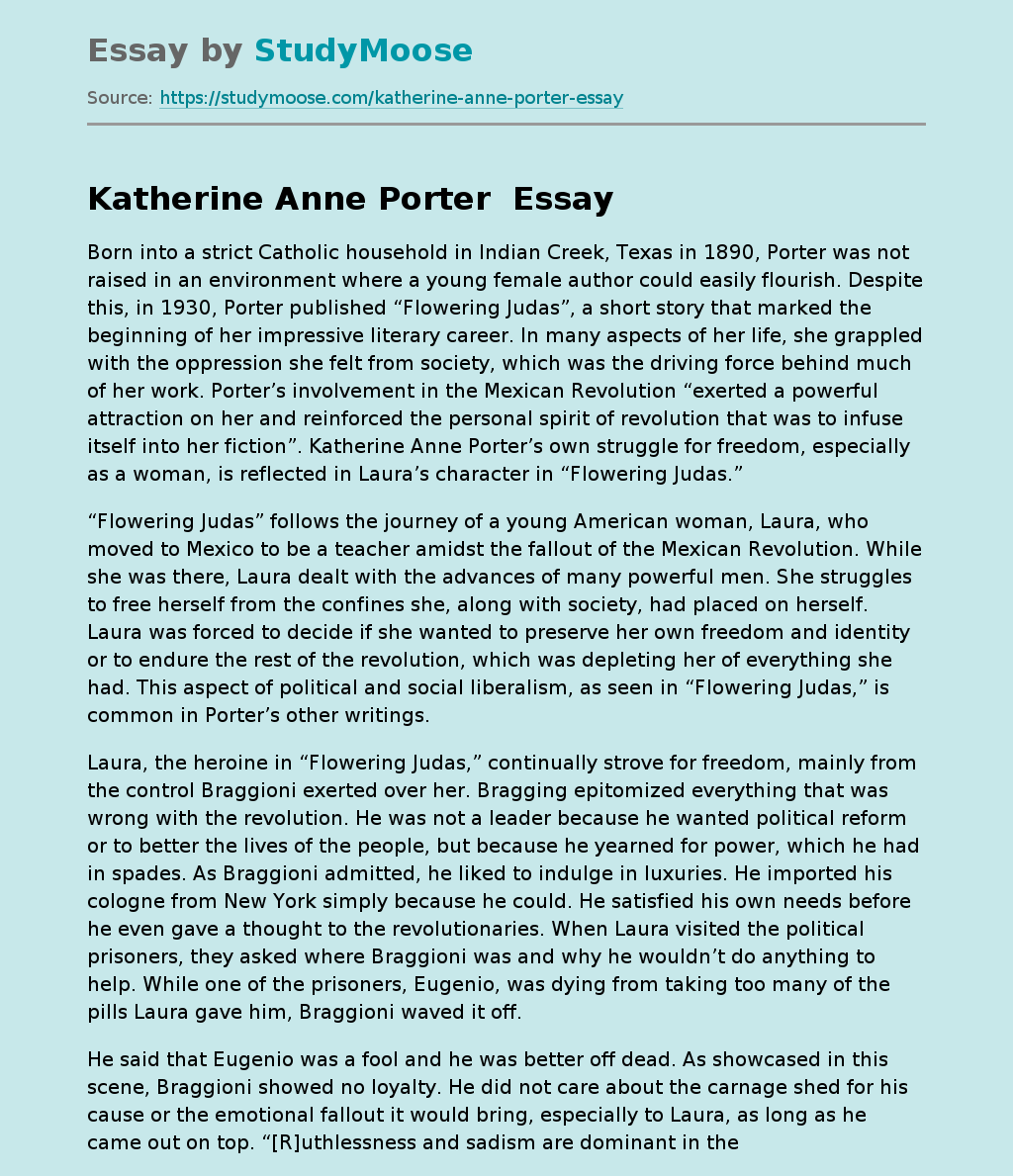