In the essay “A Homemade Education,” Malcolm X begins with explaining the struggles of how he taught himself to read and write in prison by using a dictionary and wrote from every night. He discusses how his interest and resolve to be “able to read and understand”(Malcom 227). Literature has led him to a freedom which he had never felt before. As he followed the teachings of Elijah Muhammad, he found astonishing interest in black history and slavery. His tone obviously changes from the beginning which is kind of uniformed individual he once was to a powerful view on racism in America and helped him to seek civil and political rights for African Americans.

Turn in your highest-quality paper
Get a qualified writer to help you with
“ Reading Response to “Homemade Education” ”
Get high-quality paper
NEW! AI matching with writer

While he was in prison, he spent most of his time reading and copying from the dictionary then reading it back to himself many times. As his vocabulary expanded, finally he was able to read books and understand them. As a result, he describes his feeling of success to the readers by indicating “in fact, up to then, I never had been so truly free in my life” (Malcom 227).

Teachings of Elijah Muhammad inspired an interest for Malcolm X in black history, slavery, and the white man’s brutalities and lust in the world. However, since he doesn’t consider what good things the white men have done for this world, he develops his essay by dislike towards white men. The audience can feel that as he states, “book after book showed me how the white man had brought upon the world’s black, brown, red, and yellow peoples every variety of the sufferings of exploitation.

I saw how since the sixteenth century, the so called “Christian trader” white man began to ply the seas in his lust for Asian and African empires, and plunder, and power”(Malcom 231).

Through his essay, the audience can clearly see that the literacy changed his life and encouraged him to find an interest in history. And it is not just history, but the history which white men left out. He became further interested in this topic, and found himself research more and more. The readers can know that his interest never slowed down even years later, and he gives all the credit to the homemade education that he gave himself in prison. By using his experience, historical references, and specific people, he hopes to get the readers to seek knowledge over important things that involve their lives as a new world was opened to him from the homemade education. 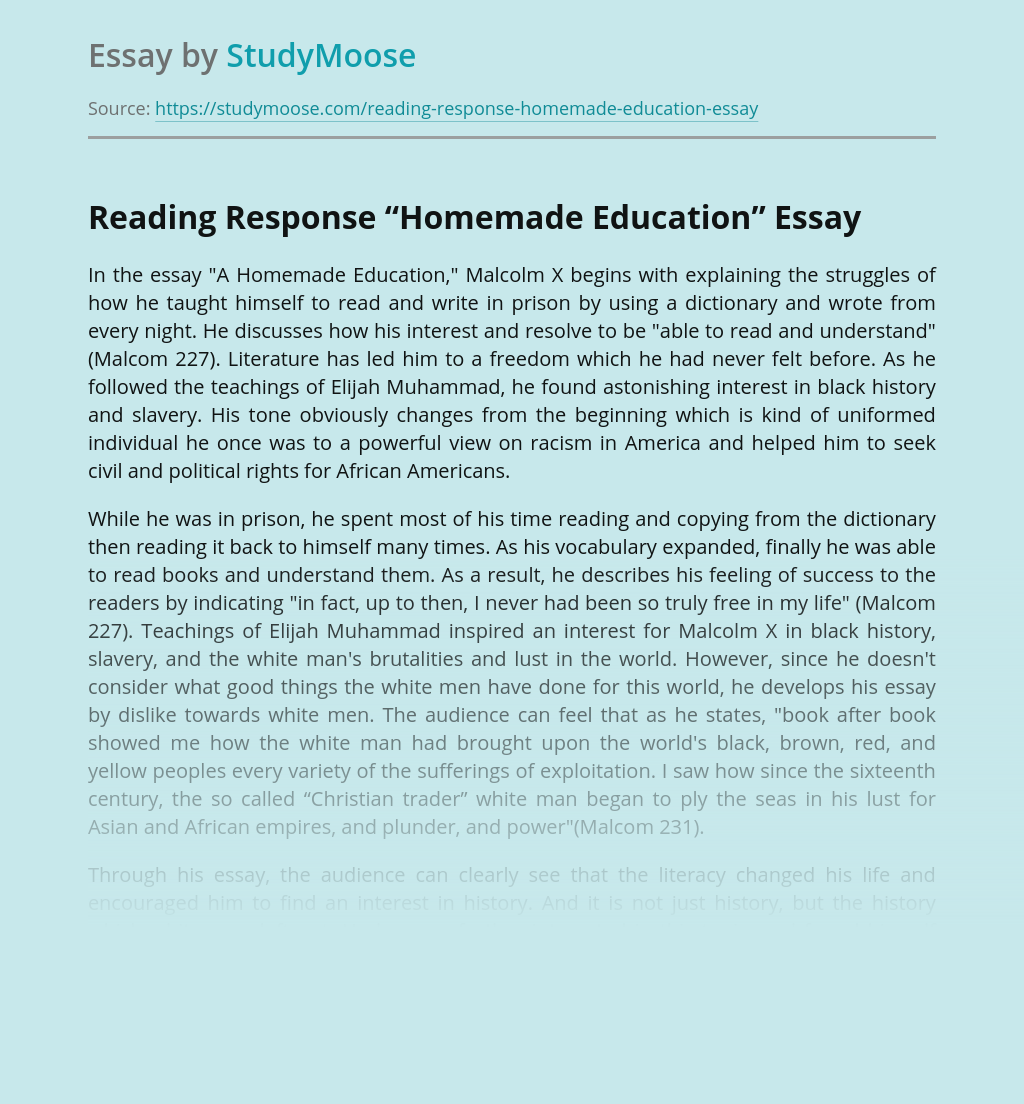 Turn in your highest-quality paper
Get a qualified writer to help you with
“ Reading Response to “Homemade Education” ”
Get high-quality paper
Helping students since 2015
Stay Safe, Stay Original