The representation of women through poetry

QUESTION: Texts often represent women as victims in a patriarchal society. How are women represented in two of the poems set for study?During the late 20th Century women remained constrained by gender ideals which they were expected to conform to; subservience, piety and beauty. This domineering state of inferiority experienced by these women is expressed and challenged by both Mary Elizabeth Coleridge and Amy Lowell through their exploration of the victimisation of women in a patriarchal society.. The underlying desire for freedom, which the poets Coleridge and Lowell illustrate in their respective poems The Other Side of the Mirror and Patterns, brings awareness to the repressive and harsh environment women have previously been brought up in.

Don't use plagiarized sources.
Get Your Custom Essay on The representation of women through poetry Just from $13,9/Page

The ideal of femininity, imposed by the patriarchy, particularly highlights the importance of the physical beauty of women. To men, women have been identified as a prized possession, acknowledged merely for their physical attributes, suggesting the dehumanisation of women and how their female experiences become trivial.

Coleridge’s The Other Side of the Mirror, exemplifies this in ‘a face bereft of loveliness’ which stresses the essential aspect of beauty through the positive connotations of ‘loveliness’. This same face is then suggested as one that ‘no man on earth could guess’, further emphasising how, without beauty, women are discarded from the thoughts of men. Similarly, Lowell highlights the importance and expectations of feminine beauty through the representation of the ‘fine brocaded gown’ which places both a physical and symbolic restriction on the persona in Patterns.

The movement of the natural environment, ‘blowing’ and ‘flutter[ing] in the breeze’, juxtaposes with the constraint of the ‘stiff brocaded gown’ which depicts the idealised hourglass physique of a woman, despite the apparent difficulty in breathing and inability to walk comfortably. The use of the plosive sound ‘k’ in ‘brocaded’ further creates an uneasy feeling of jerky stops and starts, which is likewise accentuated by the action of ‘tripping’, adding to the depth of harsh feeling. This discomfort stems from the suppression of women in the Victorian age, symbolised through the predictable nature of ‘patterns’. Like the rigid construction and entrapment of patterns, Coleridge structures her poem using a strong rhyming scheme of ‘a,b,a,b,c,b’ to enforce the idea of unavoidable confinement. For the two personas (from each text), they are expected by the patriarchal society to oblige to these patterns, however the poems reveal that women yearn to break free from the acceptable public face which they project to the world.

The inability for the female characters to express their true self has required them to maintain a private face, and thus leading to inner turmoil. Coleridge explores the destructive effect on emotions which suppression instigates in women. The persona in The Other Side of the Mirror is established as someone who is troubled and severely depressed through the alliteration of ‘wild… womanly despair’, emphasising the vile consequences of living a false and restrictive life. Unfortunately women must endure these detrimental feelings alone, articulated through the sibilance of ‘silence and in secret bled’ which creates a whispering tone and conveys a lack of expression. The Other Side of the Mirror can be interpreted through a Christian reading where the private mayhem of the persona, and ultimately for all women governed by the patriarchy, is represented by the excruciating experience of Jesus Christ during his crucifixion.

The religious allusion of ‘the thorny aureole’ depicts an image of a thorny halo, much like the crown of thorns Jesus wore, which shows how women were victimised in the society which they lived in. The woman’s reflection is paralleled to a messiah figure, suffering from injuries caused by men in power, and the crown of thorns represents the dominance and authoritative nature of men. The consequence of the male expectation causes the personas suppressed inward anger and feelings turn outward and take away her loveliness, consuming her whole being. The inner turmoil of the persona in Patterns is represented by a ‘war’. Wars too are conceptualised as patterns through its cyclical nature in which men adamantly partake it. The word ‘war’ generates negative connotations of death, raw pain and bloodiness which create a dark and ominous undertone to the poem, and additionally highlighting the silent battle for freedom. The statement of ‘weep[ing]’ reveals a characteristic of women as an emotional being and highlights the emotional effect of victimisation.

However Coleridge and Lowell no longer want to maintain the oppression of women and express their intentions of uncovering the private face, evident in the change of viewpoint in both texts. The fourth stanza of The Other Side of the Mirror takes a slightly different stance than the previous stanzas. Whereas the previous are concerned with the woman’s injuries and her feelings of woe, this stanza starts with the description of her eyes as ‘lurid’ which suggests an air of violence and power, prompted by her ‘dying… hopes’.

The kinetic imagery of ‘the leaping fire’ further enhances the anger and depth of her feelings. Lowell’s Patterns, on the other hand, reveals how the persona has taken on a more dominant role apparent in the use of anaphoras of ‘I would’ and ‘I should’ which encompasses an almost imperative quality. Just like the final line ‘Christ! What are patterns for?’ questions the occurrence of patterns in a distressed and irritated tone Coleridge too uses an exclamatory tone in ‘O set the crystal surface free!’ which is suggestive of the urgency to let the true self emerge. Not only do these poets challenge the patriarchal value, but the conventional writing style of women.

The mirror, the typical Victorian image of femininity was used by many male poets to illustrate a serene, beautiful, virgin image of the female. In The Other Side of the Mirror, instead of the mirror reflecting the expected image of pure beauty, it reflects the image of a ‘woman wild’.

This unexpected and unconventional usage of the mirror symbolism makes the image of wild desperation all the more powerful in its deliverance.

Poem “The Other Side of the Mirror” by Mary Elizabeth Coleridge,and Poem “Patterns” by Amy Lowell

The representation of women through poetry. (2016, Aug 02). Retrieved from https://studymoose.com/the-representation-of-women-through-poetry-essay 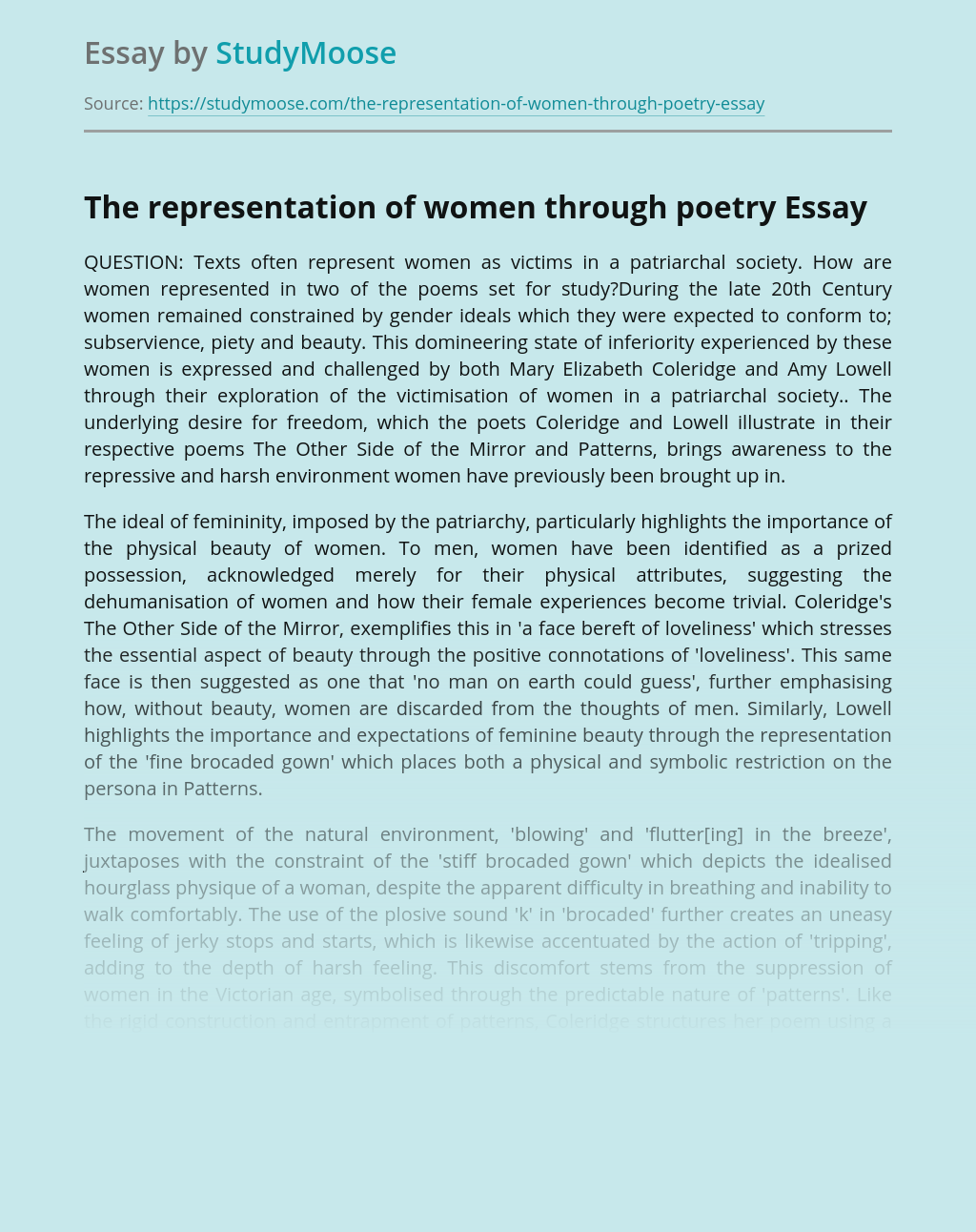 The Development of Feminism in the 1800's

Throughout the history of the world women have often been subjected to fewer rights and to a lower social class than that of men. In most societies the traditional role of the woman was the role of wife, mother, and caretaker. Women endured this type of prejudiced behavior since the dawn of time until the...

Discrimination with "A House on Mango Street"

In the society of today, discrimination and other similar ideas are not suppressed so that they are free to roam our cities, states, countries, and finally the whole world. Still, different sides of the world have different types of discriminations. There are some about animals, race, etc. But the worst possible is discrimination against the...

Get Essay
Gender Justice: What Does It Look Like?

The contemporary debate on the term “gender justice” has various dimensions. There have been philosophical discussions on rights and responsibilities, human agency and autonomy; political discussions on democratization and right to vote; legal discussions on the access to justice. Typically, the term is used to denote mechanisms to promote women’s position in society and their...

The Role of Feminism in the Secret Life of Bees

In Sue Monk Kidd’s novel The Secret Life of Bees, the theme of feminism often reoccurs. Throughout the novel, Kidd reveals the aspects and importance of feminine power and matriarchy versus the typical role of masculine leadership and authority. The teachings of Carl Jung, a philosopher who believes that society would be better by emphasizing...

The relationship between men and women presented in the short story “The Story of an Hour”, is that men dominated society. A Woman’s freedom was nonexistent. Throughout this short story, women are presented as powerless and dependent while men were considered to be superior. Women were tied down through marriage, such as, having been expected...