SeaWorld gives you the opportunity to feed and swim with dolphins, watch jaw-dropping whale and seal shows, pet stingrays, see all types of sharks, exotic fish, and so much more! But my views have recently changed after I saw the tragic death of a Sea World trainer on the news; the cause of death being one of the parks very own orca whales. This horrific news brought me to research why the whale turned on its trainer and the information I found made me change my outlook on animal captivity completely.

Don't use plagiarized sources.
Get Your Custom Essay on Marine Mammals Just from $13,9/Page

In the ethical debate over marine mammals in captivity there are many conflicting views. The public theme park industries advocate that marine mammal exhibits provide an important role in educating, entertaining, and conservation; they see nothing wrong with captivity. An increasing number of scientists counter this view and believe that animals should flourish naturally and are too intelligent to be held captive. Animal protection groups also have taken notice that these mammals in captivity develop severe health issues and should be in the wild.

There are other organizations that believe in absolute welfare of these animals, whether it is best suited in confinement or in the wild. Lastly there are associations that agree with captivity for some cases, just not when animals are exploited. Above all I agree that the more knowledge we have about marine mammals, the more mankind can do to help find the most beneficial option for specific marine animals.

When thinking about aquatic parks one in particular comes to mind for most people, Sea World. According to its website, “SeaWorld has a world-wide reputation for providing unique, up-close animal encounters designed to bring more than 20 million guests each year closer to wildlife and the world we share” (“Sea World”). Parks like this also affirm that one of their main goals is to educate people through seeing live animals in person such as dolphins, whales, seals, and penguins. Marine parks around the world, including Sea World, also claim that they serve as a rescue and a preservation center for stranded, sick, orphaned or injured animals. This is in fact true; many animal lives have been saved due to the help of aquatic parks (SeaworldParks.com). But some still question if it’s justifiable to keep animals in captivity if they are capable to live naturally in the wild after being rehabilitated. It’s evident that SeaWorld and other captivity parks have not only contributed tremendously with saving countless marine mammals lives, but have also entertained and educated thousands of people on marine life. Yet with all of this in mind it’s hard for me to fully agree that captivity is always the best option for these animals’ welfare. It’s tough to deny that the entertainment and profit aspect from the “yearly 20 million guests” may be intervening with the wellbeing of the animals, which should always be the main focus.

On the other side of the spectrum when dealing with the issue of marine mammals in captivity, are animal rights activists. “There are better and more humane ways of providing entertainment and education to the public without sacrificing the welfare of animals” states Grace Ge Gabriel, the head force behind the Fund for Animal Welfare (IFAW). The IFAW is a well-known organization that advocates saving animal populations from cruelty and depletion. An example of their support is their campaign to end commercial whaling and seal hunts. She and many others speak out against marine mammals held in captivity (Gabriel). These activists express that the lives of captive marine mammals are impoverished, people do not receive an accurate picture of a species from imprisoned environments, and the traffic in live marine mammals causes harmful impacts on populations and the animals’ health. A prime example is the abuse whales endure when their family and pod members are separated from each other to be put into captivity. Once removed from their natural environment, the whales are then transported to small enclosures that lack not only their families and social groups but which also are only a fraction of the size of their natural home range (“PETA”). If life for captive orcas and dolphins were as peaceful as marine parks would have us believe, the animals would live longer than their wild counterparts. While captive marine mammals are not subject to predators or ocean pollution, their captivity is nevertheless a death sentence. These caged mammals develop severe health issues from being confined to small tanks where they are forced to perform unnecessary tricks for “entertainment.” According to PETA’s website, “Wild orcas can also live for decades—some have been documented to be more than 90 years old—but those at Sea World and other marine parks rarely survive for more than 10 years” (peta.org). Animals imprisoned die prematurely from stress and other captivity-related causes; which is seen as the main cause for the deaths of animal trainers at aquatic parks, like the attack mentioned before from Sea World. The question of whether marine mammals should be held captive is even weighed in by scientists. There have been countless experiments and portrayals of cetaceans, or aquatic mammals such as whales and dolphins, displaying intelligent behavior. Experts in philosophy, conservation, and animal behavior recognize that dolphins and whales are adequately intelligent to justify the same ethical considerations as humans. According to the BBC News World website, “The move was made at the annual meeting of the American Association for the Advancement of Science (AAAS) in Vancouver, Canada, the world’s biggest science conference. It is based on years of research that has shown dolphins and whales have large, complex brains and a human-like level of self-awareness” (http://www.bbc.co.uk). This has led the experts to conclude that by recognizing these animals’ rights would serve as a catalyst to ending whaling and captivity of these self-aware creatures.

Unlike the views of animal display industries who endorse captivity, or animal rights activists and scientists whom advocate against it, there are some associations that seem more neutral towards animal confinement. These organizations act as a middle ground, where their pure intent is to promote animal wellbeing; whether that may be in captivity or in their natural environment. These groups look at specific cases of different marine mammal species individually and decide where that animal is more likely to thrive. The Seal Conservation Society (SCS) is a terrific illustration of a society who is neutral to the thought of captivity; their main focus being on conservation and welfare. They view both sides of captivity on their website. At first questioning captivity they inquire, “Do the benefits to humans from the animalndisplay industry justify the animals’ confinement and stress associated with the unnatural environment? The question remains for all marine mammals whether captivity is justified for entertainment, educational or conservation purposes.” Then countering those thoughts according to the website, “A further justification for captive pinnipeds to be considered is the research value of captive studies where the research clearly increases our understanding and appreciation of pinniped species, this benefit must be considered in the context of the welfare and well-being of the animals involved. Our society would tend to support those facilities where the animals’ long-term and welfare is a priority” (pinnipeds.org). These impartial organizations appear exceptionally more helpful than the other radical view points; instead of supporting what they believe in they can focus more on the specific animal and not their cause. In correspondence to the previous organizations mentioned, there are similar associations that promote animal well-being but also support captivity if it’s necessary. These groups are marine mammal rescue centers that endorse captivity along with non-performance opportunities. The Marine Mammal Center is an organization that believes animals shouldn’t be abused in captivity by being forced to perform unnatural tricks, but believe captivity should be allowed if the animal cannot survive on its own in the wild (“Marine Mammal Center”). These institutions don’t see captivity as the enemy, but rather view aquatic theme parks and entertainment business that confine animals for the wrong reasons to be immoral. Their website won me over when it stated, “What we do is more than kind-hearted consideration for the well-being of other living creatures. We recognize the fundamental relationship that binds humans, animals, and the ocean” (“Marine Mammal Center”).

The question if marine mammals should be kept in captivity is tough to answer. Personally, I believe that in our present society there are more urgent matters than amusing audiences by exploiting such intelligent and defenseless animals. We have an ethical and imperative responsibility to think about species that may be negatively impacted by our actions. This includes a lot of species, and cetaceans are no exception. These marine mammals should remain where they evolved and thrived and we should make sure that their rights are protected so that they can go on living there. 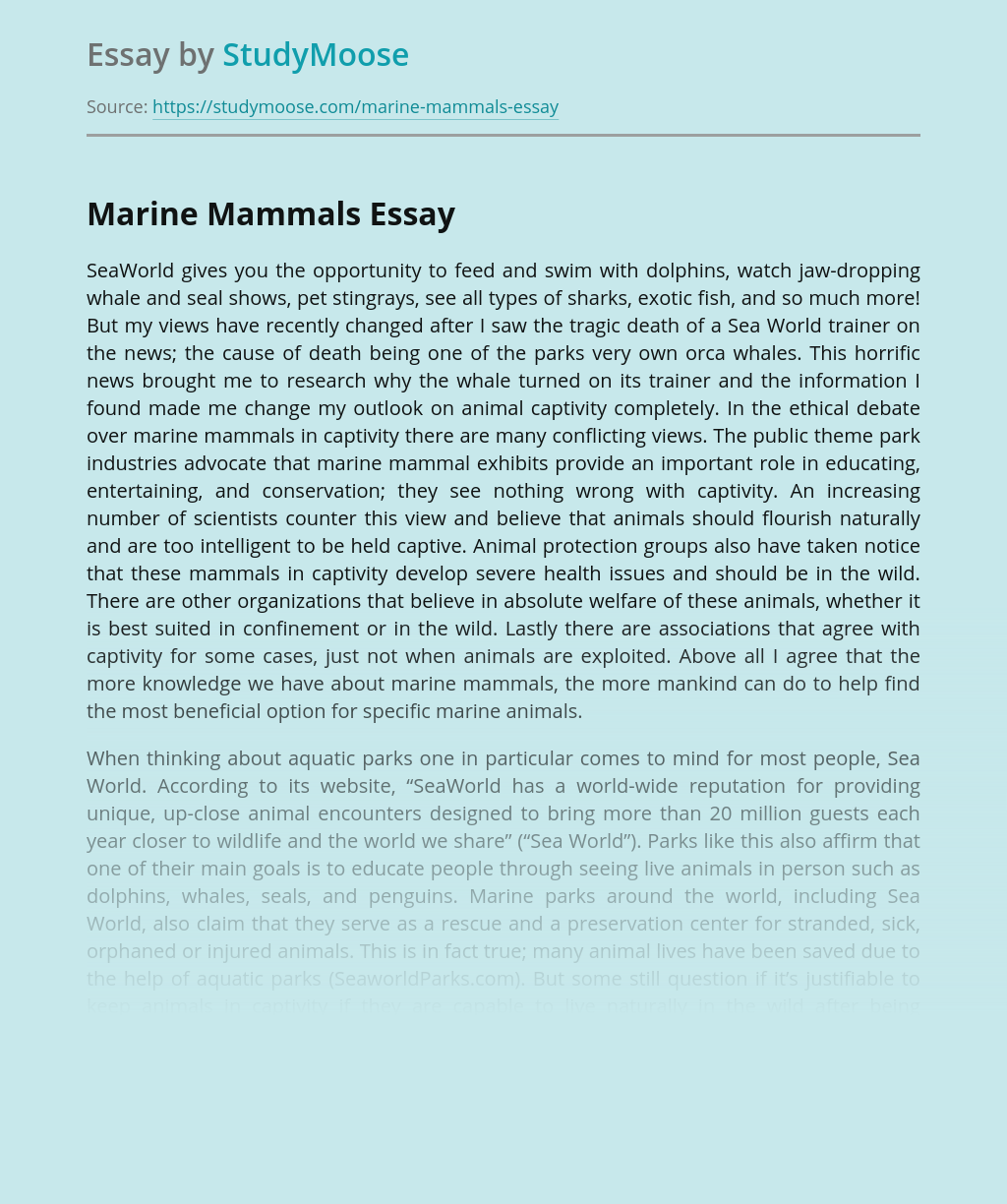 Family pet overpopulation is a continuous crisis and is a major issue in every neighborhood. Each year thousands of animals need to be euthanized and put to sleep due to the fact that good homes are not discovered for them. Deserted pet dogs and cats are complimentary to stroll the streets where they need to...