Introduction: Sea World is a place for people to get a splash of happiness and amusement watching whales do intricate tricks but is the fact that the Orcas are held in captivity and unhappy worth that splash of amusment. The case of “Blackfish” deals with the captivity of Orca Whales in Sea World and the bill being put up in California to ban the captivity and breeding of Orcas called the California Captive Orca Welfare and Safety Act (Sanchez, 2014). A documentary produced by Magnolia Films about the “Blackfish” case and the danger of Orcas being in captivity lead to a menacing effect on the image of Sea World.

Turn in your highest-quality paper
Get a qualified writer to help you with
“ Analysis on Blackfish ”
Get high-quality paper
NEW! AI matching with writer

Description: In 2010, a trainer who worked for Sea World, Dawn Brancheau was killed by one of the show whales in Sea World [Tilikum] which set off this controversy and the realization that Orcas should not be kept in captivity (Zurko, 2014). In the documentary “Blackfish” that was released in July of 2013, it expresses that when Orcas are held in detention and bred within such confinement they grow unhappy and aggressive.

Orcas are used to living in open waters and that’s where they are happiest, being so detained makes them unhappy to the point where they get aggressive towards those trainers who they know have a part in keeping them imprisoned.

They lash out towards the trainers, not because they are dangerous creatures, because they are desperate for a normal healthy life back in the open waters. Because Tili attacked Brancheau, it lead to the beliefs that the title of killer whales was a literal title, when in reality their anger is due to the face they are in captive in the park.

Animals are adapted to the environment they were intended, Orcas are used to living free in open waters being able to communicate with other animals in the ocean (Sanchez, 2014). The captivity of the orcas has shortened their lifespan because they are unable to live the way that they should. Interpretation: The image of Sea World has been totally turned around since the “Blackfish” case has escalated into the media forming a new image for the company. Identity is when a company’s reality is exposed through evidence, such as the services they provide, from the company, whereas image is a tangent of identity where it is the reflection of the organization’s identity.

In relation to “Blackfish” the way the trainers and the company of Sea World treat the orcas has been exposed to the public altering the image of the company. Sea World used to be viewed as a place for families to go and enjoy watching trained Orcas do awesome tricks and entertain their audiences, where now it is seen as a place where animals are mistreated and held captive. Evaluation: This captivity is a huge controversy building up to protests against Sea World and leading to the bill put up by California to ban the act of keeping Orcas that were caught from the wild and keep them in captivity. Though there are Sea Worlds in Texas and Florida, the bill will immediately affect the California Sea World (Rohenkohl, 2014). If the bill were to pass, California would have to find a new way to entertain their guests or breed orcas that are not wildly caught (Martinez, 2014).

The documentary, “Blackfish” caused much controversy and threatened the image of the Sea World Company. Conclusion: It would make a person wonder, if Brancheau was not attacked, would the true identity of Sea World been exposed? The image of Sea World being a happy escape has been reformed due to the fact that Orca’s being detained was proven to be a problem and a danger to not only to the trainers, but to the Orcas themselves. Orcas deserve to live in the open waters, free, and live the life span they are intended and not be confined within the tiny pools of Sea World. California may be the first to make a difference in Orca’s lives, now the rest of the world can be a part of the change. 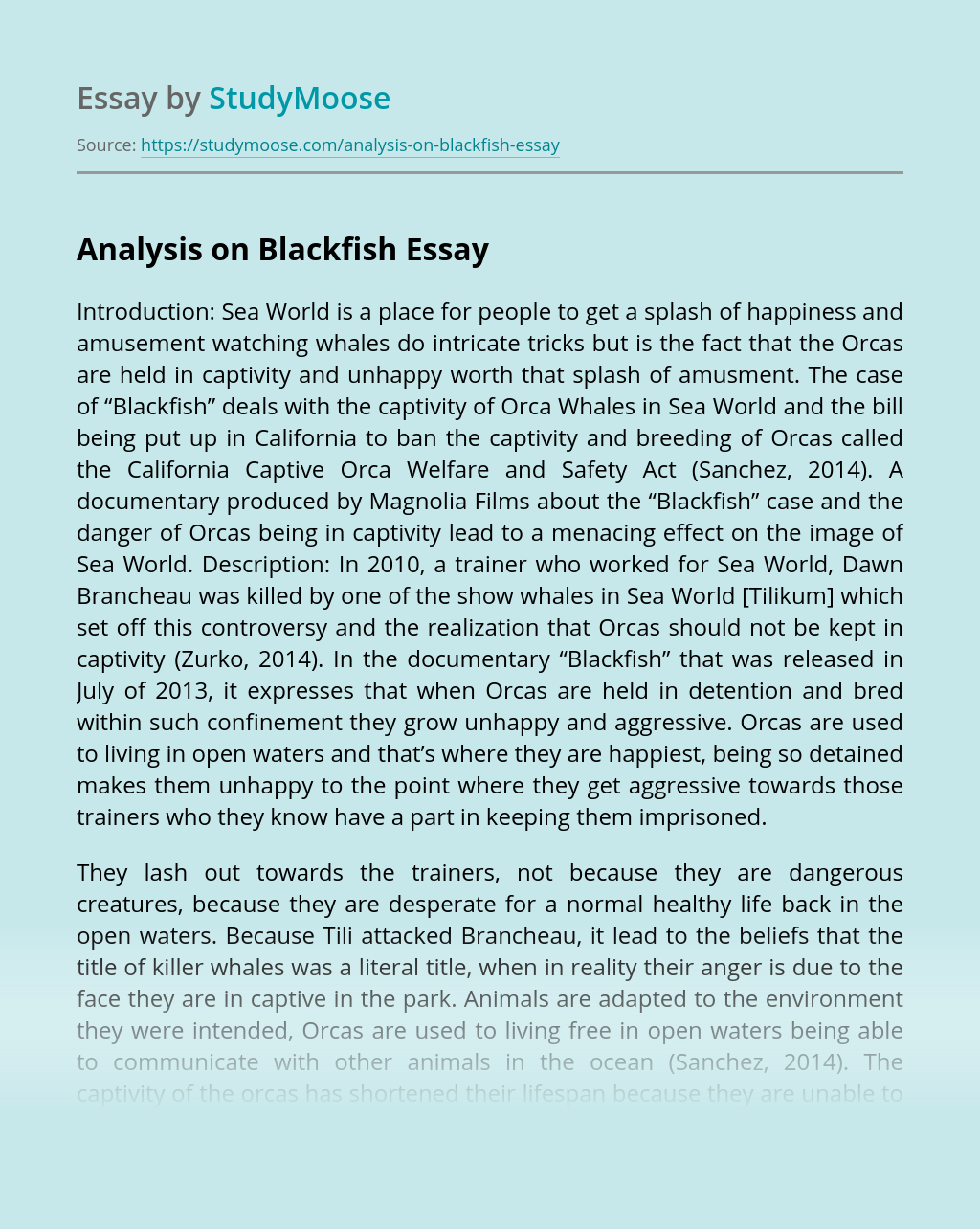 Turn in your highest-quality paper
Get a qualified writer to help you with
“ Analysis on Blackfish ”
Get high-quality paper
Helping students since 2015
Stay Safe, Stay Original