Who does not love to see dolphins and whales flipping and doing tricks? Although the animals look happy and unharmed, there is a dark truth behind the captive marine life in amusement parks and zoos. Yes, attending zoos and marine life amusement parks are a part of childhood; but recently researchers have discovered just how cruel the environment is for the marine life in captivity. After studies of comparing the quality of life of marine animals in the wild and in captivity, there are multiple examples shown in Blackfish, PETA, and the Animal Welfare Institute that show that animals prosper and live longer in their natural habitats.

Due to the cruelty endured by the captivated Orcas, all the SeaWorld parks should be shut down and the Orca whales should be set free to prevent further demise to their species. In 2013, one documentary changed the world for animals in captivity forever.

Blackfish, premiered in the Sundance Film Festival and was immediately picked up by Magnolia Pictures and CNN Films.

Director Gabriela Copwerthwaite and her team spent years investigating and creating one of the most controversial and inspiring documentaries the United States has seen. Over the past year, Blackfish has made over two million dollars at the box office, making it one of the most popular documentaries of our time. Not only does Blackfish inspire people to reconsider going to Sea World, it generates people to try to make a change for the animals in captivity. Blackfish is a documentary that centers on the life of the killer whale Tilikum, most famous for his large structure and his collapsed dorsal fin.

The documentary begins explaining the attack of three different whale trainers while employed by Sea World. Ironically enough, Sea World was not the only common thread among these deaths. All of these victims also shared the same cause of death: Tilikum, the “killer whale”. Tilikum was captured off the coast of Ireland in 1983 as a baby whale. Blackfish describes in detail the three deaths and the true reason behind the anger behind Tilikum’s attacks. The attacks were provoked by the mistreatment of the whales. Tilikum and the other whales were held in small floating cages that were just as big as their own dimensions. Orca whales are used to being in the wild and having miles of ocean to roam, so when SeaWorld captures these whales and does not give them the right living environment, it is shown that they attack.

While in the Sea World captivity, the Orca whales lifespan is almost half the size of a free Orca whale lifespan. Tilikum is still held in captivity by Sea World, only moving when he has to during shows. Many activists and former Sea World Employees have formed movements and have appeared on the news to try to get Sea World to free these whales.

There are multiple differences between whales in captivity and whales in the wild. There are countless recorded injuries inflicted on instructors by orcas, but killer whales in the wild have no record of ever hurting a human being. SeaWorld would give tours and tell their audience that the life span of whales in the wild was 25-30 years and that whales in captivity live longer, because of the veterinarian care they receive. According to Howard Garret, an expert on killer whales, orcas in the wild have lived to be over 100 years old. SeaWorld tells their audience that 25% all orca whales in the world have a collapsed dorsal fin, which is due to gravity, dehydration, illness and injury. In reality, only 1% of orca whales in the wild have a collapsed dorsal fin and 100% of all captive whales have a collapsed dorsal fin. The reason why there are so many attacks in SeaWorld is directly related to the treatment and the territory that they are put in. SeaWorld claims that the whales that show together are all from the same family, but in actuality, they are taken from all different parts of the world. Since these orca whales are being hoarded together, the living environment causes aggression between the whales. This aggression is usually taken out on the fellow whales, but sometimes it is taken out on the SeaWorld trainers.

There are three separate occasions where the same whale, Tilikum, has attacked trainers and killed two. As a result of the attacks and killings, the SeaWorld trainers are no longer allowed in the water with the orcas during the live shows. Tilikum is now isolated in a small pool for the rest of his days, living in captivity, occasionally coming out at the end of the show to make a splash. Blackfish is a prime example of how animal captivity is not a proper way of life for marine animals.

Much like Gabriela Copwerthwaite, PETA, or People for Ethical Treatment of Animals, have exerted many efforts towards captivity cruelty and ending the brutality though articles and movements. After Blackfish was released in 2013, many people across American and the world took a stand against the animal cruelty. PETA just recently came out with an article regarding the marine life in captivity. The article centered around the cruelty and wrongness of removing wild animals from their natural habitat and communities, keeping dolphins in captivity to live their lives as fascinations at theme parks and resort hotels, where they are forced to perform in front of crowds of people. Oceanographer Jean-Michel Cousteau compared the maintenance of orcas in tanks to “a person being blindfolded in a jail cell.”  Trainers force marine mammals to learn tricks, often by refusing food and torturing animals who do not perform. A trainer at Hersheypark quit because she saw “a lot of frustrated animals that would die from ulcers.” The article says, “A marine-mammal behavioral biologist in Seattle says that captive dolphins demonstrate a variety of stress-related behavior such as self-inflicted trauma, induced vomiting, and aggressiveness. Some captive dolphins have reportedly taken their own lives by hitting their heads against the sides of pools or by refusing to come up for air” (PETA). In the wild, there has been no report of a whale or dolphin killing itself because of its habitat. Hersheypark, like SeaWorld, claims that their marine life prospers in captivity due to their loving staff and outstanding veterinarians.

Although Hersheypark, SeaWorld, and other marine amusement parks claim that their living conditions for their animals are acceptable, it is proven that the animals are more harmed in captivity. PETA is making strides towards ending animal captivity with articles informing people about the issue and pleading people not to attend zoos and other marine amusement parks. In the article, PETA points out that there is poor government regulation over the zoos and parks, which should be changed. In England, there was so much boycotting against parks that they were forced to close all of them. There are multiple countries that are closing all parks due to boycotting, which PETA is trying to achieve.

The root of the problem starts with the capturing of animals in the wild, called whaling. The Animal Welfare Institute defines and describes the process of whaling in different countries. AWI explains the confinement of marine life in aquariums, zoos, and amusement parks. The mistreatment of animals in captivity started in the early 1860s when P.T. Barnum funded a project, which captured of two beluga whales and brought them back to New York City for display in an aquarium. From then on, whaling and captivity of whales and dolphins have taken off and become a very big thing across the world. The popularity of captive animals has reached an all time high because of the money that the industry brings. AWI also has an article outlining the Dispelling the Arguments of Captivity Proponents, which are common lies that parks and zoos say to the public AWI prove them to be wrong. Some of them include, “Our animals love to entertain and are always smiling, Captivity is necessary for breeding/conservation programs, Our captive animals teach people about conservation, Our captive animals are ambassadors for their species, educating the public about their wild cousins, We couldn’t do our conservation work without the money we receive from our customers, Our captive animals are protected from the horrors of nature, Our captive animals have been saved from a brutal death.” AWI went through each of the points and proved how they were wrong. AWI takes a stand against captivity and has been trying to get the parks, zoos, and aquariums that mistreat their captive animals to close.

Many people today believe that SeaWorld and other parks should be shut down and are taking a stand to close them. SeaWorld of Hurt is the largest organization that was created to take SeaWorld down, which was started by PETA. They work with many celebrities and lawmakers to try to get SeaWorld to release their animals and shut down their parks. The media attention that this issue is receiving recently has hit an all time high because of the boycotting and organizations that have popped up across the country. Many countries like Israel, India, England, and Egypt have banned the parks and closed them down due to the boycotting, which America should do. California is also working on a bill to free the captive orcas at SeaWorld San Diego, which Florida, the southern SeaWorld park, should start to work on as well. The bill would stop SeaWorld from breeding the orca whales and block the import of orca semen from other states. In doing this, it would stop the growing of the parks and the expansion of the SeaWorld brand. Furthermore, the documentary Blackfish exploits SeaWorld for separating a young Orca from it’s mother vey early on because he was not performing the way that SeaWorld wanted him to.

The audience’s heartstrings are tugged as they watch the mother project a horrific cry for over 24 hours that was unknown to experienced whale trainers and Orca experts. It provides a visual example of the animal cruelty that SeaWorld inflicts upon these harmless creatures, and they do not care because they are reaping large financial benefits through these shows. Although there are laws against whaling and people are beginning to take a stand through boycotts and shutting down SeaWorld parks in other parts of the world, it is not enough to protect the Orca whales. The orca species is continuously being put at a high risk as they are stuck in tanks that are too small and being starved and punish if they do not perform in a certain manner. Orca whales do not fight with each other in the ocean, where they belong causing large lacerations and the tanks to become filthy with blood. In order to properly protect this docile from harm and each other, all of the whales need to be put back in their rightful habitats. SeaWorld has provided many generations with memorable entertainment, but it would be within the best interest of the public and the Orca whales if there were still Orcas around for future generations to come. PITA and other organizations have made admirable progress, but if extensive changes are not made soon, animal cruelty will continue to occur. 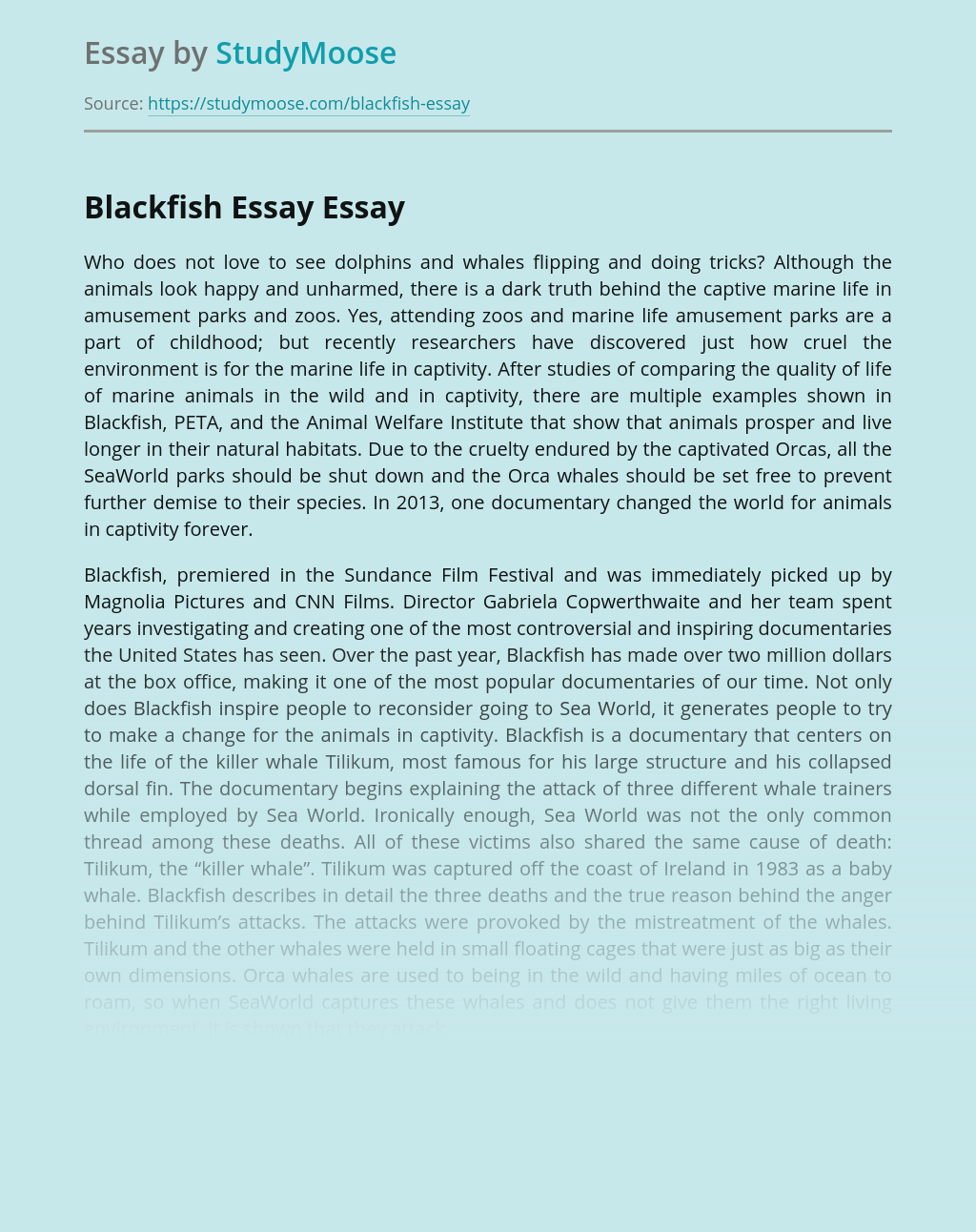