Most people are fascinated with dolphins and crave to see them in Sea World, or another aquarium, and even enjoy seeing them perform in shows. However, most people do not think about the harm that dolphins go through in order for the public to see them. Dolphins go through an immense amount of physical and mental harm solely for our entertainment. I never thought about the harm they go through when I first saw dolphins perform in a show. I, like most people my age, simply assumed that the aquariums actually cared for the dolphins.

However, people that believe this are naïve. We enjoy the shows so much that we do not want to think about what goes on behind the scenes. People need to become more aware of the harm dolphins go through while living in captivity because we are the ones with the power to stop it.

My Experience with Dolphins

When I was in the sixth grade, my parents took me to Sea World to see dolphins because they had always been my favorite animals.

I saw the dolphins perform in the show “Blue Horizons”. I remember thinking that the show was amazing, and I became even more interested in dolphins. Being so up close to the dolphins at Sea World was better than I ever imagined. This experience was very exciting to me because I had always dreamt of what it would be like to interact with a dolphin. This experience made me become even more infatuated with dolphins, so when I got back from Florida I decided to do some research on them.

When I researched how dolphins are trained in captivity, I found the results to be astonishing.

I was amazed at how dolphins are not cared for well enough when they are in captivity. Dolphins that perform in shows are especially under-cared for because they are forced to perform every day against their will. I have not seen a dolphin show since I found out how harmful captivity is for them. People need to be aware of the harm it causes so they will also stop buying tickets to see the shows because if people stop buying tickets, there will be no reason for dolphins to stay in captivity.

The Capture of Dolphins

The process of capturing dolphins is “violent and cruel” (Marine Mammals Campaign) and goes against many laws that are in place in the United States as well as in many other countries around the world. For this reason most dolphin captures occur in Taiji, Japan because the regulations regarding dolphin hunting and capture are less strict. These essentially non-existent regulations allow the fisherman to make easy profit off of a difficult to attain, high demand animal. This makes it not only easier, but also more profitable for the Japanese fisherman to capture these animals and sell them. During the capture, many dolphins die just by getting caught in the net because the fishermen are so careless. They also may die from the stress of being chased and captured.

The fishermen keep the dolphins that do survive and sell them to aquariums for a large amount of money. The demand for dolphins in aquariums is very high because they are such interesting animals, and are rare to find in aquariums. They are very rare in aquariums because they are so hard to care for, and require so much extra space and work for the staff. Since they are rare, people are willing to travel very far to just see them, which causes more aquariums to want to have them. Fishermen keep capturing the dolphins because of the large profit they make. According to Dr. Lori Marino, “The captivity industry drives the dolphin hunting industry because it creates a demand for dolphins”(Lori Marino). Japanese fishermen continue to violently capture dolphins because they making such a large profit from the high demand of the entertainment industry.

Living in the Wild vs. Living in a Tank

In the wild, dolphins have as much space as they need and are free to do whatever they would like. But, in captivity dolphins are confined to a very small space. Dolphins “can legally be confined to tanks as small as 24x24x6 feet” (Marine Mammals Campaign). In captivity, they can only swim around in circles, instead of swimming miles and miles each day, so they do not get nearly enough exercise. Dolphins often go insane from the huge adjustment to living in a very small space. In captivity, dolphins are not able to hunt for their food like they are in the wild, and they are fed fish that are already dead. Dr. Lori Marino explains, “they really enjoy the opportunity to collaborate with each other and catch prey and travel with their companions” (Dr. Lori Marino). This stimulation is taken away when dolphins are in captivity. Also, dolphins are forced to spend most of their time at the surface of the tank because tanks are not nearly as deep as the ocean.

Dolphins “spend more than half their time at the tank’s surface”(The Humane Society). This can cause dolphins to obtain skin problems. Dolphins can also get skin problems from the large amount of chlorine in the tank because they are not used to it. Living in such a small in captivity tank can cause dolphins a lot of harm because they are meant to live in the large ocean. In captivity, most dolphins get split up from their family and are forced to live alone, or with other dolphins that they do not know. According to the Humane Society, “It is almost impossible to maintain a family group in captivity” (The Humane Society).

The Little Benefits of Captivity

Despite all of the harm that dolphins go through, people will still always want to see them in shows, or even swim with them. There are some benefits to having dolphins in captivity. A lot of research can be done through simply observing them. Most of what we know about dolphins was learned through observing them while they were in captivity. Observing dolphins in captivity, “has led to our enormous knowledge about dolphin physiology, health needs and social patterns” (Riley). Recently, most aquariums are keeping their tanks much cleaner and making them larger to ensure that the dolphins will live for a longer time.

The number of dolphin deaths due to captivity has shrunk greatly in the past few years because aquariums have been making more of an effort. Recently in aquariums, “There is a trend toward captive breeding and displaying local marine ecosystems instead of staging splashy shows” (Riley). Aquariums have been becoming more aware and treating dolphins better, yet they still are not able to preserve their life for as long as they would live in the wild because they are not meant to live in such a small tank. Although there are some benefits about dolphins being in captivity, living in captivity is still extremely harmful for dolphins, and they should not be forced into such a life.

Many activists are recently speaking out about the harm dolphins go through while they are in captivity. Richard O’Barry trained the dolphin that performed in the television show Flipper. But, after he witnessed the pain dolphin’s experience, he decided he had to do something to stop it. He is no longer a dolphin trainer, and instead he made a documentary named The Cove, which shows the harmful capture of dolphins. He tries to show people what the dolphins have to go through in order to perform for us. O’Barry also runs the Dolphin Project, which monitors the treatment of marine mammals. Another activist that speaks out against dolphin captivity is doctor Lori Marino.

She used to research dolphins in captivity, but she no longer does because she realized the pain that captivity causes dolphins. She recognizes all that we can learn about dolphins when they are in captivity, but she says that no dolphins deserve to be harmed just so we can learn more about them. Marino explains, “What we have learned about who these dolphins are tells us unequivocally that they do not belong in captivity” (Lori Marino). Marino believes that what we have learned from studying dolphins in captivity shows us that they do not belong there. She believes that we have the power to stop fishermen from capturing more dolphins if we just stop attending dolphin shows.

Marino states, “The public has the power to end all of this: don’t buy a ticket!” (Lori Marino). If the public stops seeing dolphin shows, fishermen will no longer have an incentive to capture more dolphins. The entertainment industry is what drives the fishermen to capture dolphins, so if there is no more demand for dolphins, fishermen will have no reason to capture them. Many other activists are also learning about the harm captivity causes dolphins and becoming more passionate about the subject, so they are speaking out against it.

In my opinion, it is absurd that dolphins are held against their will in tanks that are way too small for their large bodies. After having such close contact with these incredible creatures, it is absolutely insane to allow the atrocities that these majestic animals suffer in captivity to continue. Dr. Marino is absolutely correct because if the public stops buying tickets to these shows, there will be no reason for aquariums to hold them there. However, this is not very realistic because people from all over the world enjoy watching dolphins perform. People will always want to have the luxury of seeing these beautiful animals. So, there should be a limit to how many dolphins are held in certain regions in the world. People should also start creating more ways to interact with dolphins while they are in the wild. Aquariums should organize trips to see dolphins in the wild. If there are more ways for the public to see dolphins in the wild, less people will go to see them in captivity.

Plus, people need to be aware of the harm that captivity can cause dolphins. There should be more information about this subject readily available to the public. Aquariums should have to alert people about the controversial topic of dolphins being in captivity before they go to see the dolphins, so the public can decide if they still want to see the dolphins. Many people are sympathetic towards dolphins, but not many people know about the harmfulness of captivity. People need to become more aware of this issue so they can help resolve it. When people become more aware of this issue, they will agree that it is immoral and inhumane to abuse a creature so similar to us in intelligence, and to force it to live outside its natural habitat. 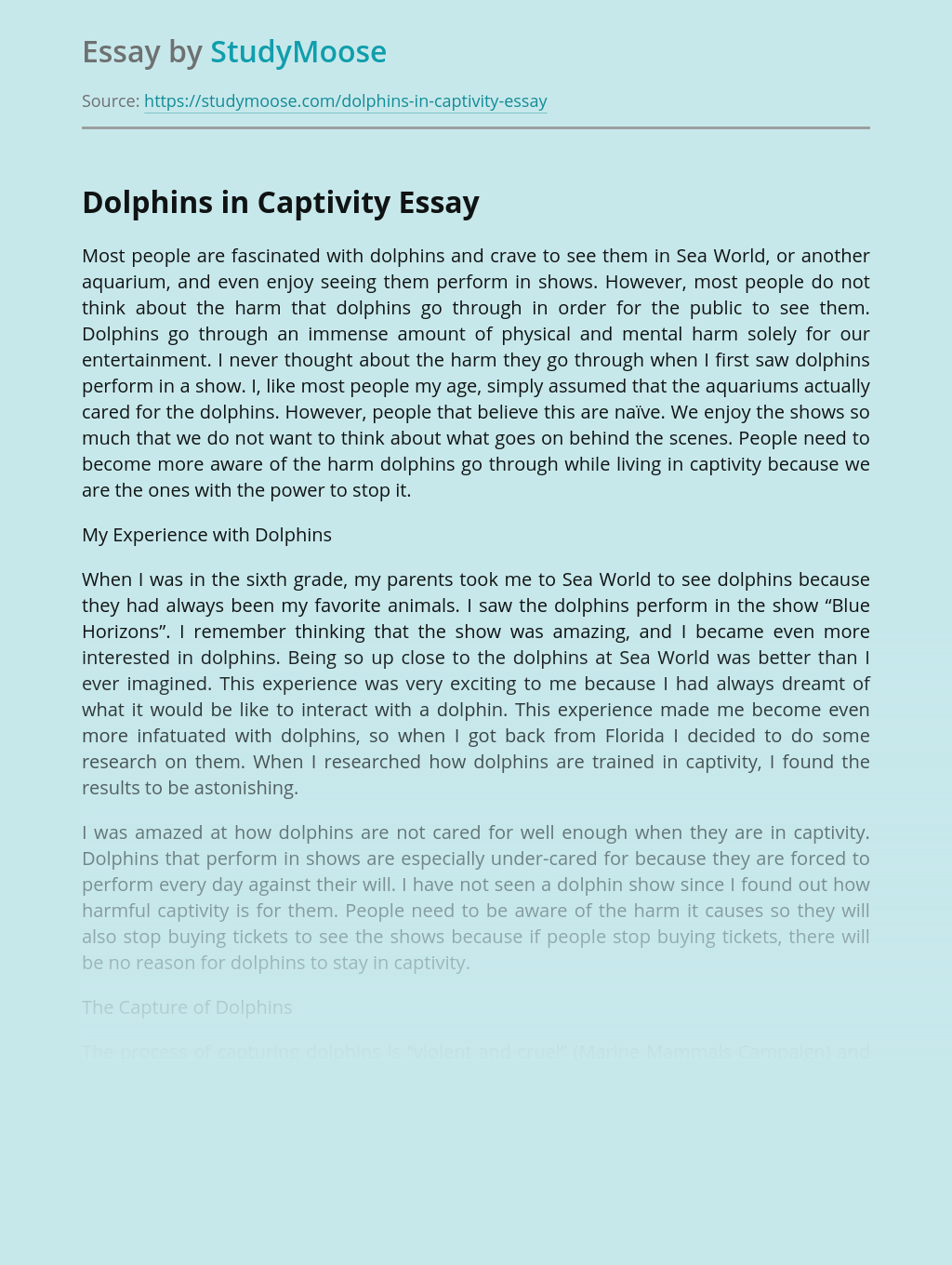 Don’t waste time
Get a verified writer to help you with Dolphins in Captivity
Hire verified writer
$35.80 for a 2-page paper
Stay Safe, Stay Original