Plot summary of The Old Man And The Sea

The plot summary of the old man of the sea The Old Man and The Sea is the story of an epic that makes a very great effort between an old, who has a lot of experience of a particular activity and he is the epitome of a modern human life, it was happened in a small fishing village near Havana, Cuba, The waters of the Gulf of Mexico, in the 1940,s in the twentieth century. The writers of modern age focused on man as well as psyche of man rather than society, so that Ernest Hemingway wants to write the old man and the sea ,which was the old(Santiago) suffered from alienation, that alone all the time, it was one of the features of modern age.

Don't use plagiarized sources. Get your custom essay on
“ Plot summary of The Old Man And The Sea ”
Get custom paper
NEW! smart matching with writer

In 1930,s and during the second world war Ernest Hemingway was lived in Cuba, and because he was loved hunting and fishing and in the age of childhood he fished and hunted with his father, so that he began to write the old man and the sea in the last years of his life and published in the 1952 as a single issue of human life in modern age.

Note; In that small village, the villagers must work, which work it is fishing to get money so as to sustain in life, so that each members in the village go to sea with his boat or skiff in the early morning for fishing, and Santiago, old Cuban fisherman was one of them, but alone.

As (Ernest Hemingway said). He had a shack which was a small building made of woods, in it a bed, a table, one chair, a picture in colour of Sacred heart of Jesus and another of Virgin of Cobre of his wife on the shelf in the corner under his shirt. He had a small boat and gone eighty-four days without took a fish. The boy named Manolin, that the old man took him when he was five years old and the boy loved him too much and loyalty for him, when the boy saw him without taking a fish in the first forty days while he took three fish in the first week. It made the boy, unlucky to see the old man each day went and came, went and came with his skiff empty and without fish, then the boy came to help him such as coiled lines or the pole, harpoon, brought coffee, sometimes with some food from Martin or Perico, and newspapers that talked about baseball, then it would been the discussion between Santiago and Manolin, that Santiago had a huge admired for the Great DiMaggio, he was great in baseball player, and whose father was fisherman. The boy left him because his parents forced him to do, and go to another boat. The parents of the boy with the villagers called Santiago salau or unlucky and laughed at him, but Santiago said toward Manolin I knew you did not leave me because you doubted, then the boy said no it was true because my father made me left, so I must obey him, finally the boy left him and Santiago goes to sleep, in his sleep he dreamt lions that played on the white beach of Africa, this was a sense when he was a very young man. The next morning before sunrise Santiago went to Manolin’s house to wake Manolin so as to carry Santiago’s gear to his boat and drinking coffee, on the beach wished each other good luck. (Miller, 1988: 3-20).

This time that started with the new day Santiago decided to go far out from others fisherman in the sea, he rowed steadily away from shore toward the deep waters of Gulf Stream. The first he heard the leaps of the flying fish then he saw flying fish pursued by dolphins a diving, circled seabird, he considered to be his friend, and he followed farther and farther out the seabird that was hunting for fish. One of the old man’s’ lines goes taut, and then the old man said out laud, would made a lovely piece of bait. Big fish pulled the boat every day farthest from shore until lost lights of his village. He can’t increase the tension on the line, because if it was too tauted it will be break and the fish will get away. It was a kind of struggle big fish (Marlin), and Santiago, that Marlin wants to get free and the old man wants to get his aim, goal, and desire that stands for life. Because he could not took big fish in to his boat and said a loud I wished I had the boy, but nothing, then he said to himself you have to work better, it was a kind of encourage himself, and he was optimistic all the time although he was alone, and can’t catch a fish, so as to helped himself he said toward Marlin I loved you and I respect you but I will killed you dead before sunset, after that a small tired bird named (Warble) came from north toward the old man’s boat, perched on the taut fishing line that linked the old man to the big fish, the old man told the bird to stayed and rested here to live and to sustain like other any man or birds, he said you were tired and loneliness as me. He didn’t mentioned the Hawks that waited for little bird, suddenly the Marlin surged, and the bird left him without any reaction, Santiago didn’t aware of the bird because his hand was bled, while marlin was quiet, the old man took the line with his back and ate the tuna that he caught day before, then turned to his imaginary mind to baseball, the great DiMaggio, and he wondered if DiMaggio would stayed with the marlin. The marlin woke and jumped out of water again and again and began to circle around the boat for hours and the line taken by Santiago’s hand that fought with the circling fish, after hat he pulled the fish on to it was side by the boat and plunged his harpoon in to it. (Miller; Asiaing.com, 10-37).

Note; now he was happy, comfort and without any harm or pain because he got or completed his great aim, desire with the catching of big fish.

Here the long strength struggle finished between The Old Man, and the Marlin with the fish lurched out of the water and dead, he pulled the boat toward the fish fastened the fish to the side of the boat. He thought how much money he could make from such a big fish, and he imagined that DiMaggio would be proud of him. The old man found himself wondered, luck, happy, and got his aim, goal, and he rowed toward his village with the great won in his life, but his happiness long less which an hour later amako shark arrived having smelled the marlin’s blood, the second fight and struggle began with sharks that wanted to eat the marlin’s flesh, he was able to killed a number of sharks with his knife and weapon, but he lost his knife and things in the process. He was failure after all and when he got back to the shore of his village there was nothing left but the head, the Skelton, and tail of the marlin. He beached his boat and went to his small building slept and dreamed the lions and turtles. The next morning, Manolin came to the old man’s shack with brought a coffee and despite the old man’s bad luck he decided to go fishing with him again. The entire fisherman had gathered around the Santiago’s boat and measured the Skelton at eighteen feet. Hemingway employed a number of images that link Santiago to Christ, the model of transcendence, who turned loss in to gain, defeat in to triumph, and even death in to new life, and as a representative character for everyone in the society. (Miller, 2002:26-31).

Major Characters in the old man and the sea:
*Just we had two major characters,
1-Santiago, (The Old Man).
2-Manolin, (The Boy).
-Santiago; The old man of the novella’s title. He was a Cuban fisherman, suffered terribly throughout The Old man and The Sea, he had went eighty-four days without caught a fish, and became laughingstock of his village, but he was able to patient. (Miller, 2002: 5).

-Manolin; was present only in the beginning and in the end of The Old Man and the Sea, but his presence was important, because Manolin’s love and loyalty for Santiago highlighted the Santiago’s valued as a person and as a fisherman. (Miller, 2005:6).

Minor Characters in the old man and the sea:
We had four minor characters in the old man and the sea.
1-Marlin, (Big fish).
2-Joe DiMaggio.
3-Martin.
4-Perico.
*Marlin; It was a big fish, which was the greatest aim and goal of Santiago. The struggle more than three days between Santiago and Marlin, it was the trying by Santiago to catch Marlin, he had took marlin, but it was destroyed by sharks later.(Miller, 2002:5).
*Joe DiMaggio; although he never appeared in the story. He was one of American most famous baseball players; Santiago worshiped him as a model of strengthen and young. (Miller, 1988: 55-56). Note; he always

*Martin; Martin a café owner in Santiago’s village, didn’t appeared in the story. Manolin often went to martin for Santiago’s supper and others. (Miller, 1988:12).

*Perico; perico was the owner of the bodega in the Santiago’s village. He didn’t appear in the novella the old man and the sea, but he served an important role in the fisherman’s life about the scored of the baseball’s newspaper. (Miller, 2002: 6).

Plot summary of The Old Man And The Sea. (2016, Feb 23). Retrieved from http://studymoose.com/plot-summary-of-the-old-man-and-the-sea-essay 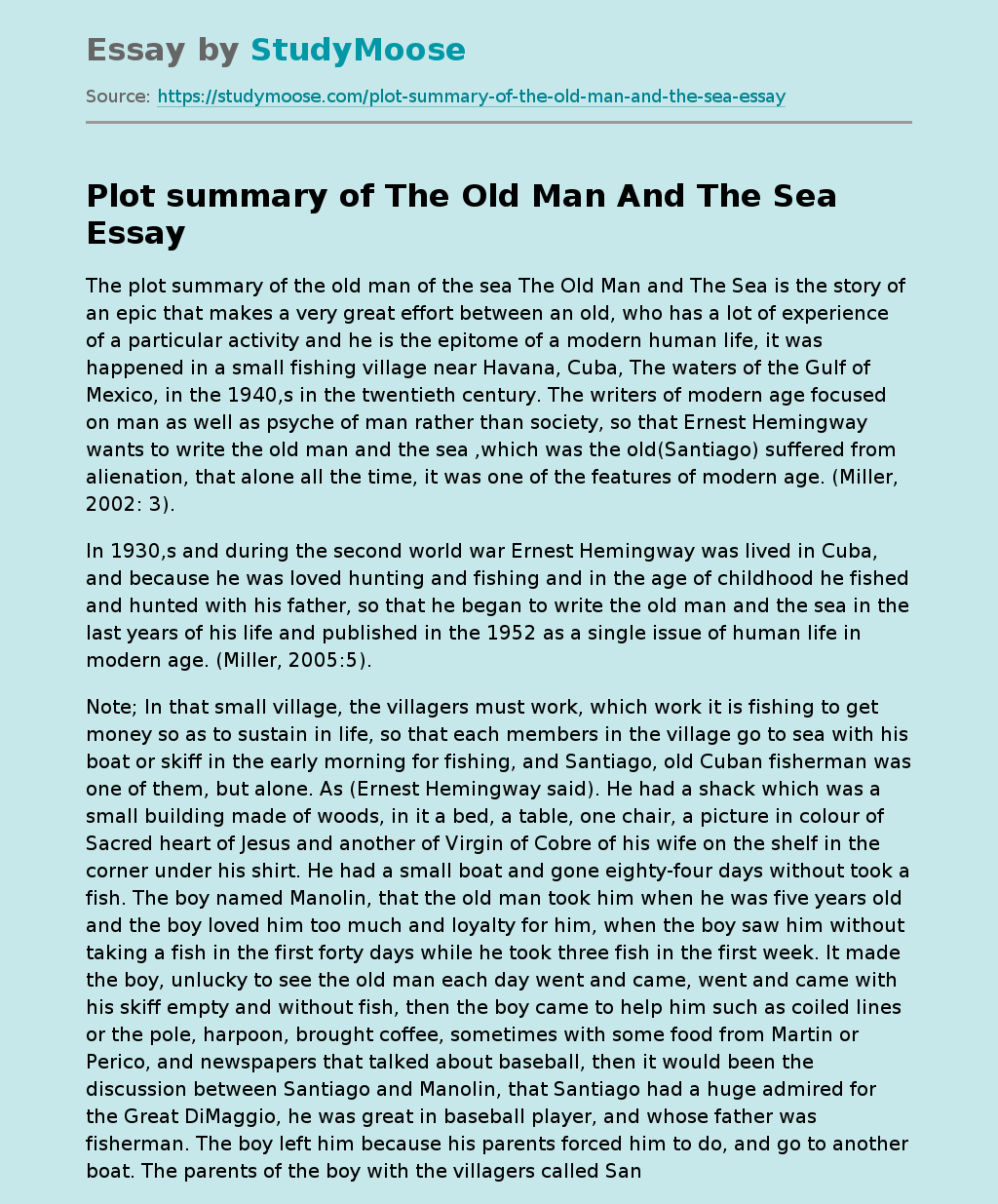