Hero is a simple-sounding two-syllable word, which many people freely use to name and describe others. But, how many people really know what a hero is? One of the most know codes for defining a hero would be Ernest Hemingway’s code, which can be seen in his novels. “The code hero is a man who lives correctly, following the ideals of honor, courage and endurance in a world that is sometimes chaotic, often stressful, and always painful.” (CodeHeroDefinition). Ernest Hemingway uses Santiago, the main character in The Old Man and the Sea to symbolize his code hero.

Don't use plagiarized sources. Get your custom essay on
“ Hemingway’s Use of Code Hero in The Old Man and the Sea ”
Get custom paper
NEW! smart matching with writer

In The Old Man and the Sea, Santiago lives his life with honor, not only for others but for himself as well. Even though he is unable to provide for himself as a fisherman, due to the fact that he has gone without catching a fish in over two months, he keeps his head high throughout what he does. Santiago is very humble with his fishing career when talking with others, for example Manolin.

“‘And the best fisherman is you.’ ‘No. I know others better.'” (Hemingway 23). In reality, he was a great fisherman, which is one reason why he caught the giant marlin. Like any great hunter, Santiago honors and praises the great fish by saying to it, “I love you and respect you very much” (Hemingway 54). He is able to show dignity throughout his hunt, knowing that he must be thankful for what he is given.

Santiago has a great deal of endurance.

Despite knowing that he hasn’t caught any fish in 84 days, he continues to go out in his boat every morning, never with a negative attitude. His persistent actions show his ability to go on every day even when the odds were against him. After catching the marlin and being out so far for almost two days, Santiago is extremely tired, but he won’t give up to the fish, or go to sleep. “He felt very tired now and he knew the night would come soon” (Hemingway 67). Even though he could have slept, he mostly stayed awake with the fish, and kept all of his courage so that he would be able to get home with the great marlin. His courage showed when he had to stay in the ocean alone for three days with little protection, and his small food supply.

He could have turned back to shore safely at any time, but he didn’t. Santiago faced possible death at any moment, but his courage allowed him to continue on his journey. When the sharks attack the carcass, he does everything in his power to fight them off when it’s obviously a battle lost from the start, but he gives it his all. After loosing his harpoon when fighting with the sharks, he still continues to go on and make a new weapon (out of the few materials on his boat, for example an oar and his knife) and uses all of the energy he has left in him to protect the fish.

Through the novels Hemingway has written, like The Old Man and the Sea, his famous code hero can be seen with detailing evidence. Santiago is the symbol of Hemingway’s code, and it can be proven by the ways he lives his life, from his honor, to his endurance and courage. “Life is filled with misfortunes, and a code hero is know by how he endures those misfortunes” (CodeHeroDefinition), and Santiago is able to do just that in his life. He can turn a situation around so that it works for his benefit, but still while doing so he looses some, whether it be his physical strength, or his fishing reputation with the other fishermen. Santiago is a perfect example of what a Hemingway code hero really and truly is.

Hemingway's Use of Code Hero in The Old Man and the Sea. (2016, Jul 02). Retrieved from https://studymoose.com/hemingways-use-of-code-hero-in-the-old-man-and-the-sea-essay 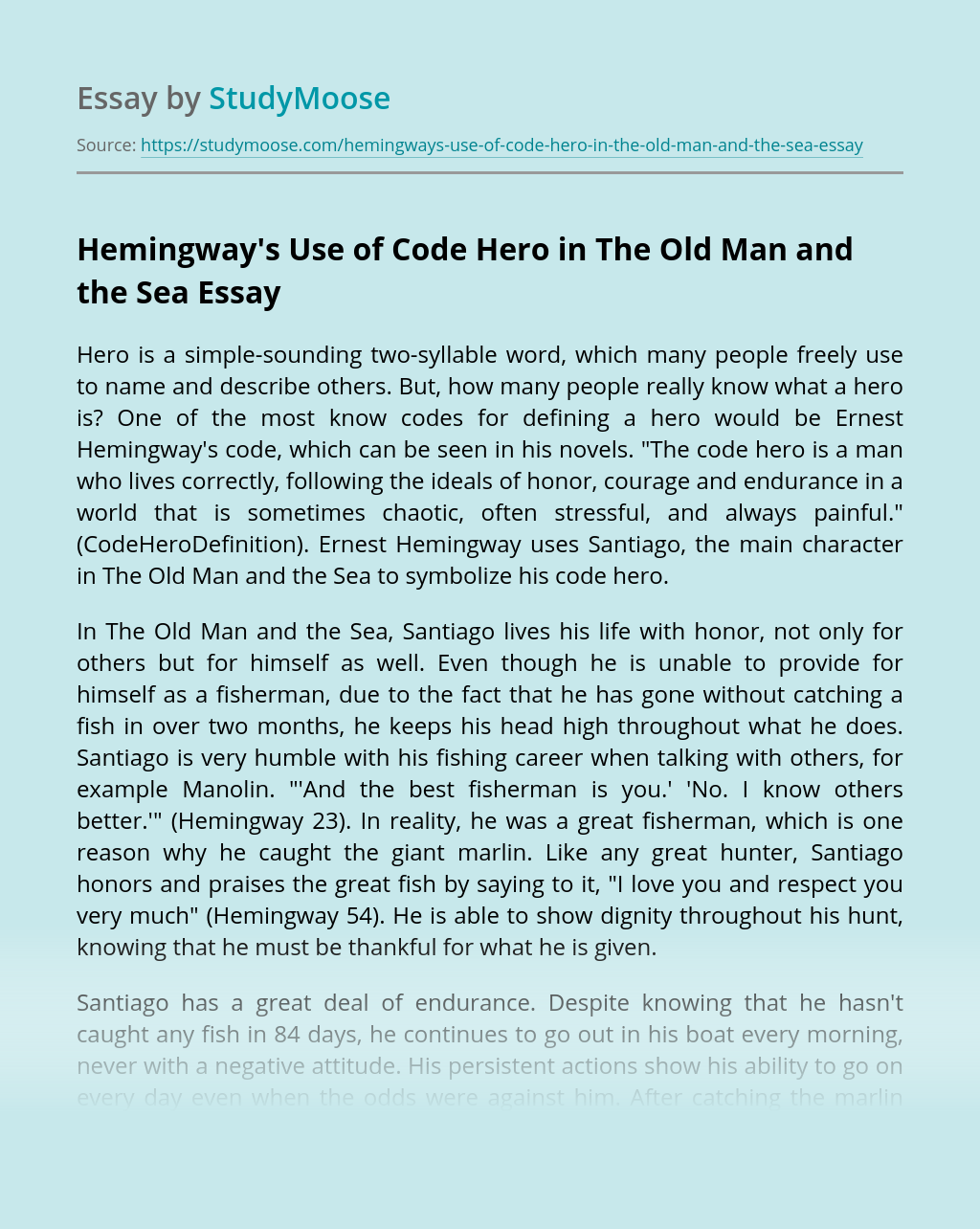